Rabaa was a massacre of innocents Egypt must never forget

Rania al-Malky
I remember. Others remember. But Egypt's post-coup propaganda machine has worked overtime to push an alternative reality 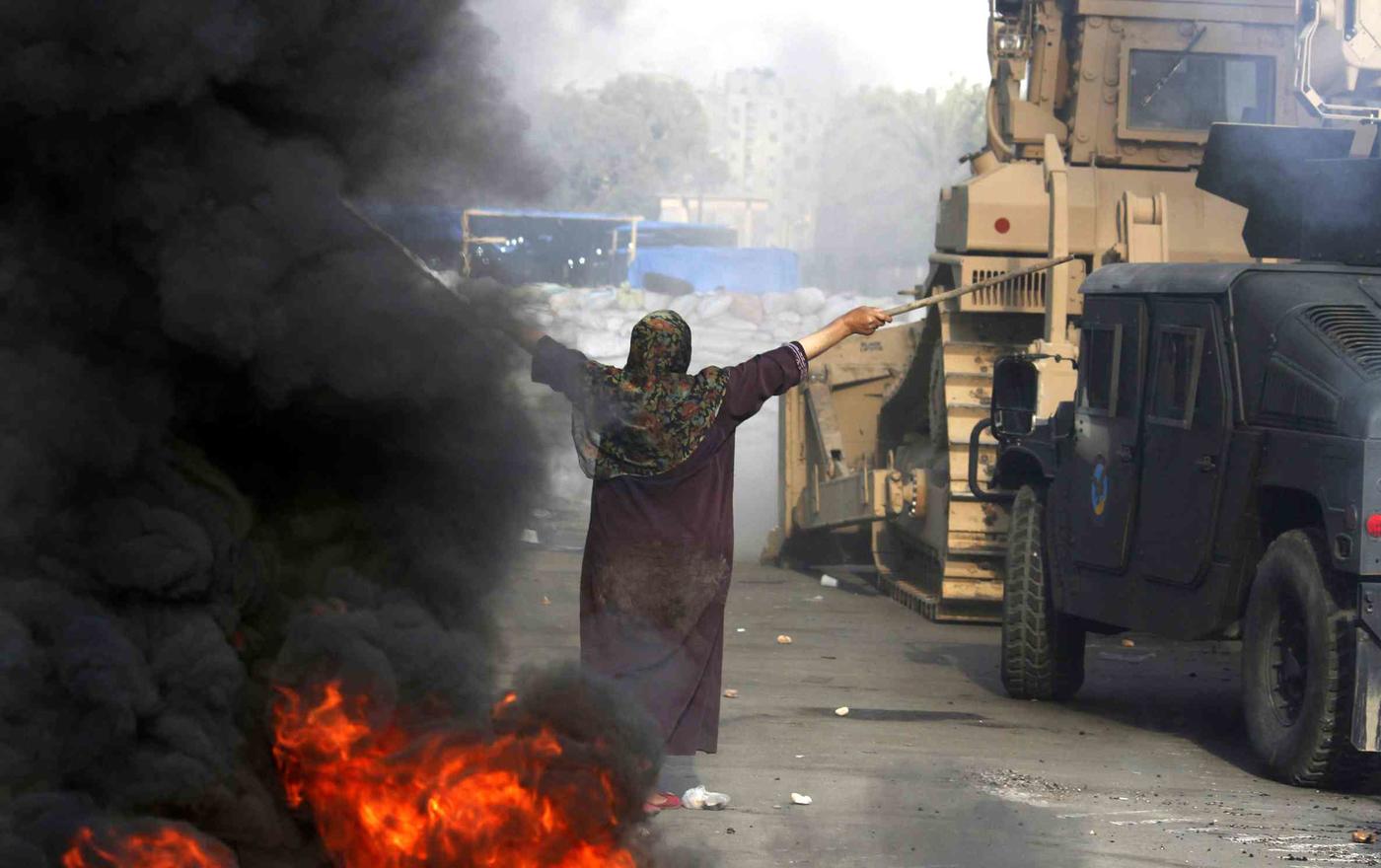 How does one remember a massacre?

A few weeks after Egyptian police and military brutally attacked protesters at Rabaa Square on 14 August 2013, a journalist at the Cairo bureau of NPR interviewed me. I don't remember his name, but I will never forget a story he shared about a photographer he knew who covered Tiananmen Square in Beijing in 1989.

The photographer had witnessed and documented how troops with assault rifles and tanks suppressed a budding democracy movement, killing hundreds of protesters point blank. It was a miracle she, too, wasn't arrested. She later told him that by the time it took her to develop the photos, traces of the massacre had been completely obliterated from the square.

TV broadcasts were covering the usual daily stories. At some point she remembered feeling that had she not taken those pictures herself, that she too may have questioned the brutality of the government's attack, or whether it even happened at all.

People have unique ways of coping with trauma. I had visited Rabaa and Nahda squares, the sites of the two Muslim Brotherhood-led anti-coup protests in Cairo 2013, a few days before the massacre.

It was a sweltering summer's day. It was also Ramadan and the protesters were fasting. No food or drink from dawn until sunset.

I walked around the tents to find the armed thugs that state and private media claimed were "infesting" the squares, murdering passersby and hiding their bodies under a massive podium they erected, incidentally within less than a hundred feet from several military and police administrative buildings.

None of it was true.

What I saw were ordinary people doing something extraordinary. Despite the stakes against them, they fearlessly exercised their inalienable right to protest what they believed was a violation of everything that the 2011 Tahrir Square uprising stood for.

It was not about removing a 30-year dictator whose cronies usurped their land and enslaved their youth in an endless cycle of poverty and ignorance.

It was about starting a democratic process, imperfect as it was, which respects the ballot box and ensures a peaceful transition of civilian power every few years.

Days later, I tried to watch Al Jazeera to verify claims by state television that those very same unarmed men, women and children had pre-empted an attack on police and military forces who had offered them safe passage out of the protest camps.

Though the authorities had disrupted the satellite station, I was able to see some live footage.

It was not enough, but within a few hours YouTube was teeming with videos that told a completely different story. Dead bodies wrapped in bloodied sheets bulldozed by the police, youth left to die in the makeshift hospital in Rabaa mosque and finally, the mosque itself burned while the wounded were still inside.

I stopped writing for a year after publishing my last editorial on 20 August. I watched and listened as the military's well-oiled propaganda machine, with its henchmen in the so-called liberal media, its progressive thinkers and activists, methodically implemented a campaign to distort the truth about what happened that day.

I noticed how that systematic process actually started on 5 July when the first peaceful protesters were gunned down in front of the Republican Guard club building in Cairo, where Muslim Brotherhood supporters believed Egypt's first democratically elected president, Mohamed Morsi, was held.

Three days later the same spot was the scene of even more carnage, documented by Amnesty International. The authorities killed at least 88 people between 5 July and 8 July, according to the report.

None of it received any coverage in the local media. By then, the propaganda machine had ticked up a parallel campaign against all foreign media (their sworn enemies at Al Jazeera taking the lead, as their offices were raided) and mobilised a social media army to dismiss eyewitness videos as fabrications and "fake news" orchestrated by the "evil terrorists" and their "sympathisers".

The last category included any vocal critics associated with human rights organisations or anyone who felt morally compelled to speak out against atrocities they experienced personally or they knew had affected someone in their circle.

In a New York Times story published as early as 6 July, a reporter at one newspaper said that her editor had given his staff "explicit instructions not to report on pro-Morsi demonstrations and to make sure that articles indicated that the perpetrators of violence were always Islamists".

Only daily talk show pontifications promoting fear of a civil war to escalate a culture war that the Brotherhood had started would be tolerated. If you didn't toe the official line you were either shut down, arrested or your offices were raided.

The great whitewash was a literal one too. The square was cleaned up and reopened in less than a month and the mosque was rebuilt and painted all white.

By the second anniversary of the massacre, in a gesture that reeks of vitriol, the government renamed Rabaa as Hisham Barakat Square, after Cairo's notorious prosecutor general, who was assassinated in a bomb attack in June 2015.

Barakat was sworn in on 10 July, 2013, days after the military's removal of Morsi. His controversial tenure involved a record number of death sentences handed down to Brotherhood members in what international human rights organisations described as kangaroo courts.

As Hitler wrote in Mein Kampf: 'Propaganda tries to force a doctrine on the whole people'

He also lead the prosecution of journalists and non-Islamist opposition activists known for their involvement in the Tahrir uprising.

As Hitler wrote in Mein Kampf: "Propaganda tries to force a doctrine on the whole people. Propaganda works on the general public from the standpoint of an idea and makes them ripe for the victory of this idea."

His strategy ultimately led to the concentration camps of Nazi Germany. In Egypt it led to the internment of more than 40,000 people, to hundreds of forced disappearances and ultimately to the reinforcement of a pervasive culture of silence and apathy.

Not unlike his Nazi counterpart and other military dictators closer to home such as Nasser, Abdel Fattah al-Sisi's propaganda campaigns created an atmosphere tolerant of violence against Islamists, encouraging passivity and acceptance of inhumane measures against them, as they appeared to depict the government as stepping in and "restoring order".

At the same time they cultivate a facade of "popular will and support" for the military leadership as the only stable force capable of leading Egyptians to prosperity.

The irony is all too clear as Egyptians over the past four years have seen their livelihoods deteriorate amid drastic inflation, soaring fuel prices and failing services.

There is no empathy left in their hearts to think about the injustice of it all, let alone the dead from four years ago.

I end with an anecdote that, to me, sums it all up.

It was July 2015, around the second anniversary of the coup. The scorching Cairo sun pierced through my all-white outfit.

I was working on a documentary film project about a 21-year-old who took up self-defence to confront Cairo's rampant street harassment. I needed to shoot a few seconds of men walking out of the Ramses Square underground metro station.

Armed with nothing more than an iPhone, I stood at the metro exit and started filming. Yet within less than three minutes I was flash-mobbed by throngs of men, after one woman, probably much younger than she looked – I still remember her face - began screaming at the top of her lungs, accusing me of being a spy working for Al Jazeera.

She insisted on taking me to the police station. Terrified, I resorted to the patrol officer, an old man who realised instantly that the only way to get me out of this ditch was to take my phone, personal ID and report me to the metro police.

This is what Egypt has become: a frightened old man and an angry mob.

It worked. I was underground watching as a civilian-clad policeman went through every item in my wallet, every picture on my phone and even listened to some of my personal voice memos.

As I waited for his verdict, a frail and frightened old man, almost in tears, walked in to report two "suspicious-looking" men he saw walking on the rails.

In his mind they must have been terrorists.

This is what Egypt has become: a frightened old man and an angry mob.

Rabaa was not Tiananamen Square 25 years ago. But it's extraordinary how, within just a few years and despite the communications revolution, which did offer a (temporary) alternative to the hegemonic state message, we seem to be in exactly the same place.

Photo: A woman tries to stop a military bulldozer in Rabaa Square in August 2013 (AFP) 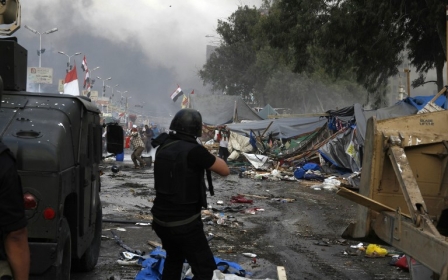 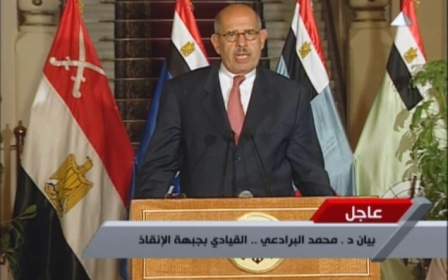 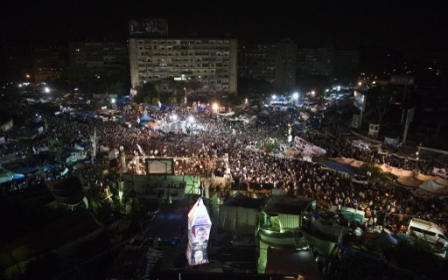