On Nakba day, why is Israel hosting Eurovision?

Ghada Karmi
The singing contest falls exactly a year after Israeli troops massacred more than 60 protesters in Gaza. Israel should not be hosting Eurovision 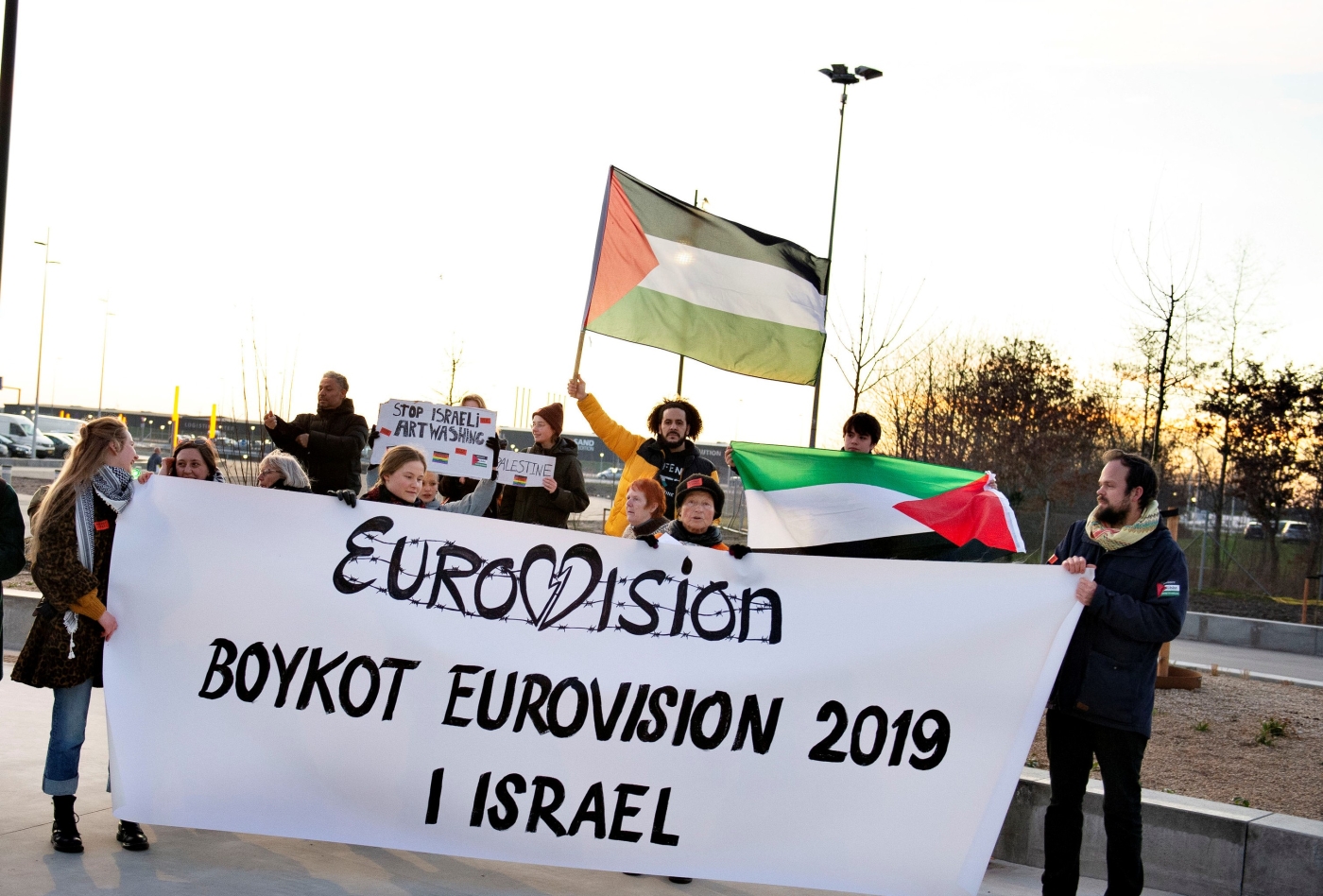 Demonstrators call for a boycott of the Eurovision Song Contest and call for Denmark to withdraw from the contest hosted in Israel this year, in Herning, Denmark, on 23 February (Reuters)

The Eurovision song contest is to be held at the Expo Centre in Tel Aviv from 14 to 18 May.

Forty one countries are represented, and an estimated 200 million people will watch the four-day event, a huge boost for the standing of the host country.

The choice of Israel as the venue for this glittering occasion is wrong in every way. Israel qualifies for the competition because the Israel Broadcasting Authority (IBA) is a member of the European Broadcasting Union, which is responsible for the event. The country's first participation in the contest came in 1973.

Nevertheless, Israel is not part of Europe. It likes to see itself as European, but that is not the same thing. 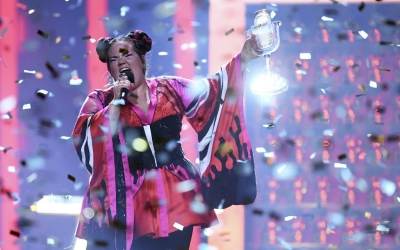 Secondly, it is likely that Expo Tel Aviv, like many other parts of the city, was built on land originally expropriated from the Palestinian village of al-Sheikh Muwannis and villages close by.

Like many others, the village was evacuated by the use of Israeli terror and brute force after 1948, and then demolished. This ugly history has not gone; it will hang over all the singing and the dancing at the Expo Centre.

Twenty minutes away from the Eurovision festivities lies the Gaza Strip, a tormented land of siege, poverty and hunger, of Israel's own making. Eighty per cent of the population is aid-dependent, unemployment runs at between 50 and 70 percent, shortages of basic materials are frequent and severe, and hospitals can barely cope with the sick and wounded.

Nearly two million Palestinians are incarcerated in the open-air prison that is Gaza today for no crime other than that they are not Jews. It is a wonder the cries of the frightened children, the amputees and the wounded of Gaza do not reach the revellers in Tel Aviv.

One year ago on 14 May 2018, the exact opening date of Eurovision this year, Israeli snipers stationed on the self-styled border with Gaza, shot and killed over 60 unarmed Palestinian demonstrators.

Then, too, another celebration was taking place in Jerusalem at the same time: the US illegal recognition of the city as Israel's capital and the announcement of the US embassy move there. In the year since that time, Israeli forces have killed a further 267, according to Gaza's ministry of health, and over 30,000 wounded with more than 7,000 people shot with live ammunition.

Was the cultural boycott not accepted as part of the anti-apartheid movement in South Africa?

But the most significant coincidence of timing this week is the 71st anniversary of the Palestinian Nakba. On 15 May 1948, the second day of the Eurovision contest, the state of Israel was established, and with it the catastrophe that has blighted Palestinian lives ever since was set in motion.

Each year, at about this time, Israel celebrates its so-called Independence Day, oblivious to the tragedy its establishment caused for Palestine's indigenous people.

Once a settled, cohesive society, Palestinians today are fragmented over different countries, 5.3 million of them still living in refugee camps. For years Israel has striven to escape or cover over its responsibility for this tragedy, and in that sense, the Eurovision contest has been a godsend.

Israelis have spared no effort to exploit every opportunity to show themselves off as a part of the Western world. Tel Aviv is bristling with signs in English, an army of local volunteers has been raised to assist visitors, and a free bus service provided, even on the Sabbath - to objections from Orthodox Jews.

A teaser video on Israel TV displays one of the Eurovision hosts, a token Arab in the shape of Lucy Ayoub, the daughter of an Arab-Christian father and a Jewish mother, singing a welcome to the guests. It tells them that, despite what they've heard, Israel is a "land of honey and milk, always sunny, and as smooth as silk." 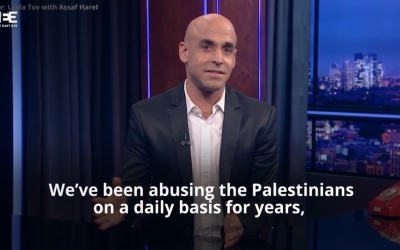 Many people are aware that the reality of Israel is very different. In 2017, the UN released an authoritative report on Israeli's apartheid system that permeates its laws and conduct towards its non-Jewish citizens.

This was compounded in the summer of 2018, when Israel passed its Nation-State law, affirming its status as the nation-state of the Jewish people. In practice and in law, Israel is a state that discriminates against non-Jews in favour of Jews: apartheid in anyone's understanding of the term.

Meanwhile, crimes against the Palestinian people and their culture continue apace. In August 2018, Israeli bombing destroyed the Said al-Mishal cultural centre in Gaza.

Palestinian artists are routinely denied exit visas to participate in cultural events abroad, and the Palestinian poet, Dareen Tatour, is in prison for "inciting terrorism" through her verse.

On what basis should a state of this kind be rewarded by the glitz and glamour of the Eurovision song contest? What message does this pretence that Israel is a normal state give when its policies and conduct obviously clash with so many civilised norms that the international community aims to live by?

What delusion drives people like the British celebrities, who include Stephen Fry and Sharon Osborne, to write a letter of protest defending Israel against a boycott of Eurovision as advocated by Palestinians and their supporters, on the grounds that Eurovision's "spirit of togetherness" was under attack?

What togetherness is found under apartheid? Was the cultural boycott not accepted as part of the anti-apartheid movement in South Africa? 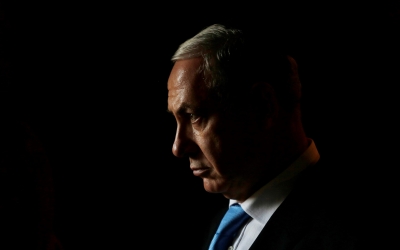 Netanyahu's Israel will declare an apartheid state. Will the West do nothing?
Read More »

Other artists have not been fooled. In January, a number of writers and artists such as fashion designer Vivienne Westwood and film director Mike Leigh, called on the BBC to cancel its planned coverage of the contest.

The musician Roger Waters has urged Madonna not to participate in Eurovision, and in September 2018, he wrote to all 41 contestants asking them to stand with the Palestinians.

If anyone doubts Israel's need to use the Eurovision contest for propaganda, its deputy minister of public diplomacy, Michael Oren, gave the game away.

As Israel agreed ceasefire terms with Hamas to end the military flare-up on 5 May, he said, "Hamas must go, but right after our holidays and Eurovision." 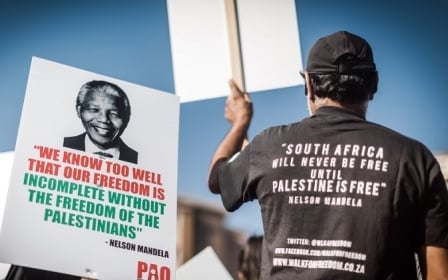 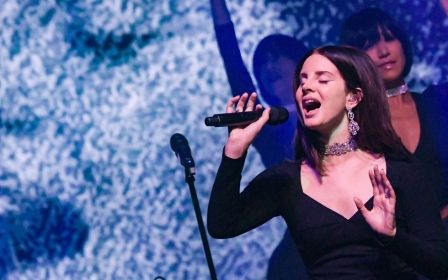 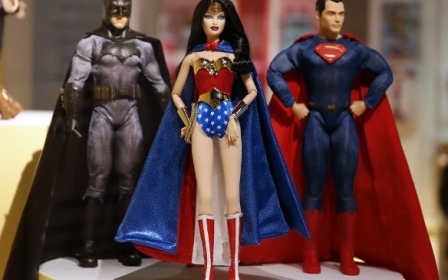 Boycott
Wonder Woman: To boycott, or not to boycott
Nada Elia