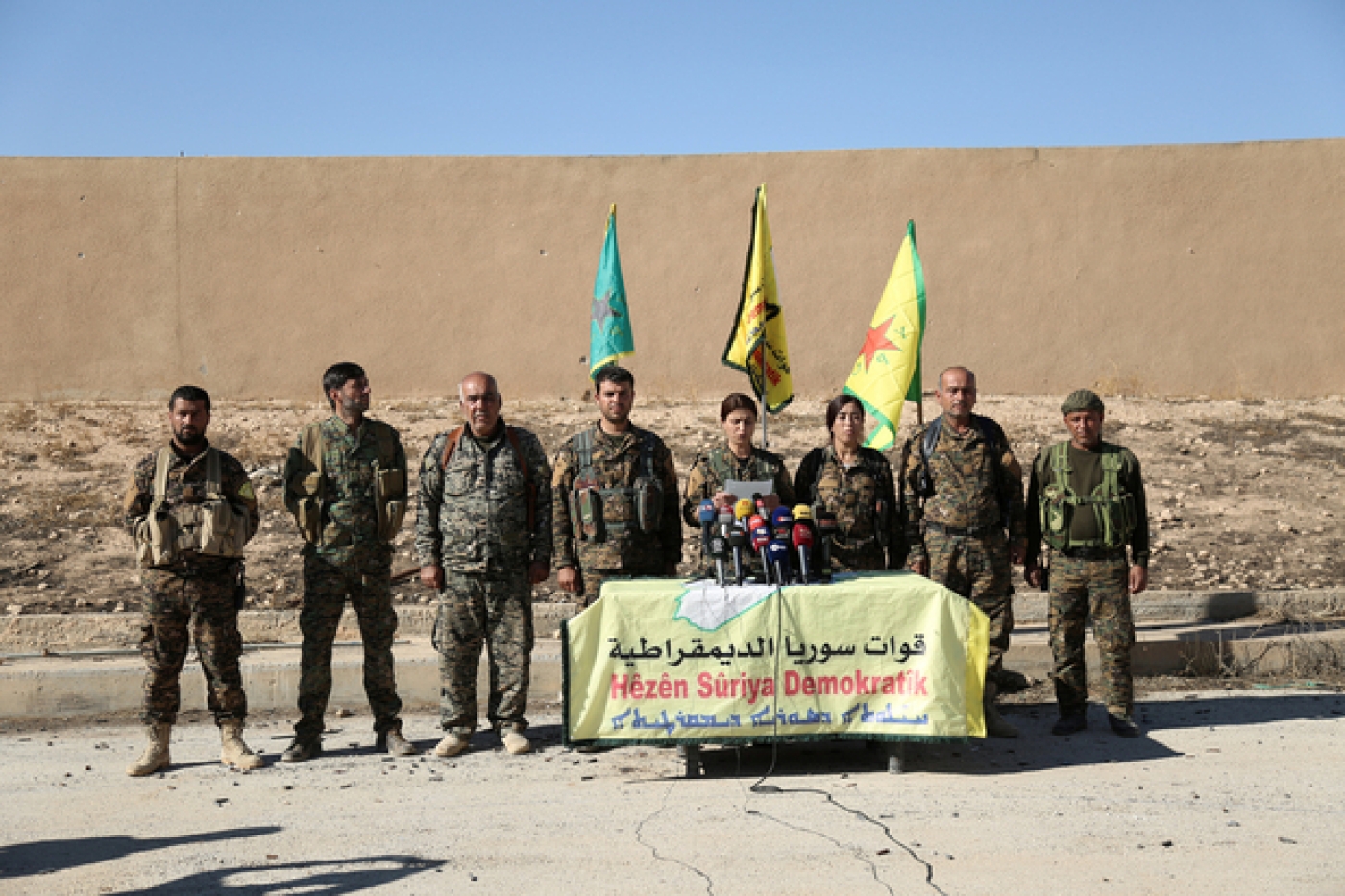 The battles against the Islamic State group (IS) in Syria are winding down, but new challenges are appearing for those who brought IS to its knees.

Among these fighters are the Syrian Democratic Forces (SDF), a Kurdish-dominated military force confronting IS in its last Syrian holdouts in alliance with the US-led coalition and US ground forces. For the SDF, the defeat of IS has opened the door for new challenges.

On Sunday, 24 September, a conspiracy of collusion between IS and the very forces destroying it - the SDF - appeared on Facebook.

The post alleged that drone footage had captured evidence of SDF units passing through IS-held territory without facing resistance. The implication: that IS and those giving their lives to defeat the terror group were one and the same.

This accusation would be easily dismissed if not for the source: the origin of these conspiratorial charges was none other than the Russian Ministry of Defence (MOD). The story, once published by the MOD, spread rapidly through Russian state media channels.

The content of claims of SDF collusion with IS merits less attention than the intention behind them. When Russian state institutions and media launch a campaign of hostile rhetoric, it is always a means to an end.

Worse for the SDF, Russian antagonism is not a mere war of words. The SDF claimed to have been targeted by Russian air strikes twice in September, causing injuries in its ranks.

An uptick in hostile words and actions from Russian actors marks a shift against their one-time Kurdish partners. How can we read these statements and events as they relate to Russian policy for Syrian Kurdish groups?

Russia's relationship with Syrian Kurds in the recent past was one of benevolence and approval. Russia initially vied with the US for influence with Kurdish groups after the former’s entry into the conflict in 2015.

One consistent example of conflicting Kurdish and Syrian regime interests has been that of Kurdish autonomy. Actors at the highest levels of the Assad regime have stated time and again that the Syrian government will not tolerate division of the country's territory.

Kurdish groups, on the other hand, are aligned with the end goal of Kurdish autonomy or even separation from Syria. Russia, in contrast, pursued a cooperative relationship with Kurdish groups.

Russia has sought to expand its zone of influence in Syria. This requires balancing the demands of its regime partners on the one hand and courting the Kurds on the other. To this end, the Russians have even attempted to broker a compromise on Kurdish autonomy between the Kurds and the regime.

The tone seen in Russian state media has reflected this goodwill. Russian media has even lavished praise on the SDF and its efforts - until recently. Other indicators of intent beyond the media sent similar positive signals. Russian Foreign Minister Sergei Lavrov, for example, is one whose words and actions have been supportive of Kurdish groups.

In one instance, Lavrov pushed to elevate Kurdish groups to an international level of diplomatic recognition by arguing to include Kurdish groups in the Syrian peace talks in Geneva in October. These groups, according to Rudaw news agency, would include the Kurdish Democratic Union Party (PYD), as well as its armed branch, known as the People's Protection Units (YPG) - a major constituent of the SDF.

Another signal of goodwill from the Russians to the Kurds that received little attention appeared in the Russian state media outlet Sputnik. The outlet's Turkish-language platform reported that a delegation of the YPG had visited Moscow at the invitation of Russian officials in October.

Superficially, this gesture may seem insignificant. However, it carries with it the gravity of the YPG's formal recognition by one of the most important players in the Syrian arena.

Even as it makes positive overtures to Syrian Kurds, so too does Russia send much more ominous signals. The relationship between the US and the SDF is one aspect that Russian officials are attempting to exploit.

The SDF has enjoyed significant US support in the form of airpower and arms during the war against IS. Protection for the SDF by the US has even appeared in the form of cover from the Syrian regime air strikes. Once IS's last remnants are cleared from the battlefield, though, there is a question of how long US support for the SDF - and Kurdish aspirations of autonomy - will last.

Lavrov and his Syrian counterpart, Walid Muallem, hinted in a recent meeting at a possible fracture between the US and SDF, as reported by the Russian outlet Tass.

The Russian strategy of 'good cop, bad cop' stems from the country's lack of negotiating leverage with the SDF

"At the moment, they are apparently intoxicated with US aid and support. However, it is must be understood that this aid will not last forever," Muallem said of the SDF, as quoted by Tass. The ministers also noted that "the Kurds have never had a major power as their reliable ally," commentary denigrating current US-Kurdish relations.

This type of allusion to diminishing US support can be understood as a veiled threat against US-backed Kurdish groups, given what is at stake.

Furthermore, the Russian MOD has doubled down on the inflammatory accusations collusions it made against the SDF in September. On 10 October, it released a statement charging that the US and its allies - implying the SDF - were "pretending to fight the Islamic State".

Russian overtures of inclusion and armed aggression are not contradictory, but rather serve as a complementary strategy. A common theme in hostile Russian media, for example, is to accuse the SDF of collaborating with terrorists. All options are on the table in confronting terrorism, including military options. This type of rhetoric therefore serves as a basis for justifying future violence against the SDF.

On the other hand, inclusive rhetoric also serves a purpose: to demonstrate to Kurdish actors that it's not too late to join the fold. In the midst of new Russian-Kurdish tensions, Russia's top diplomat has kept the door open for Syrian Kurds to join the fold of Russian alignment. It is as if to say that confrontation need not be a foregone conclusion.

The Russian strategy of "good cop, bad cop" stems from the country's lack of negotiating leverage with the SDF. However, it has not given up on including Syrian Kurds in its cohort. In an effort to bring Syrian Kurds into the fold, it is alternating hostility with benevolence to nudge the Kurds toward inclusion in Russian alignment.

- Alexander Schinis is a researcher and journalist. Former research associate for the non-profit Physicians for Human Rights and a former editor at Muftah Magazine.