Russia-Ukraine war: Are we really surprised by the racist media coverage?

Hamid Dabashi
By this point in history, western double standards on European and Arab conflicts should be apparent to all 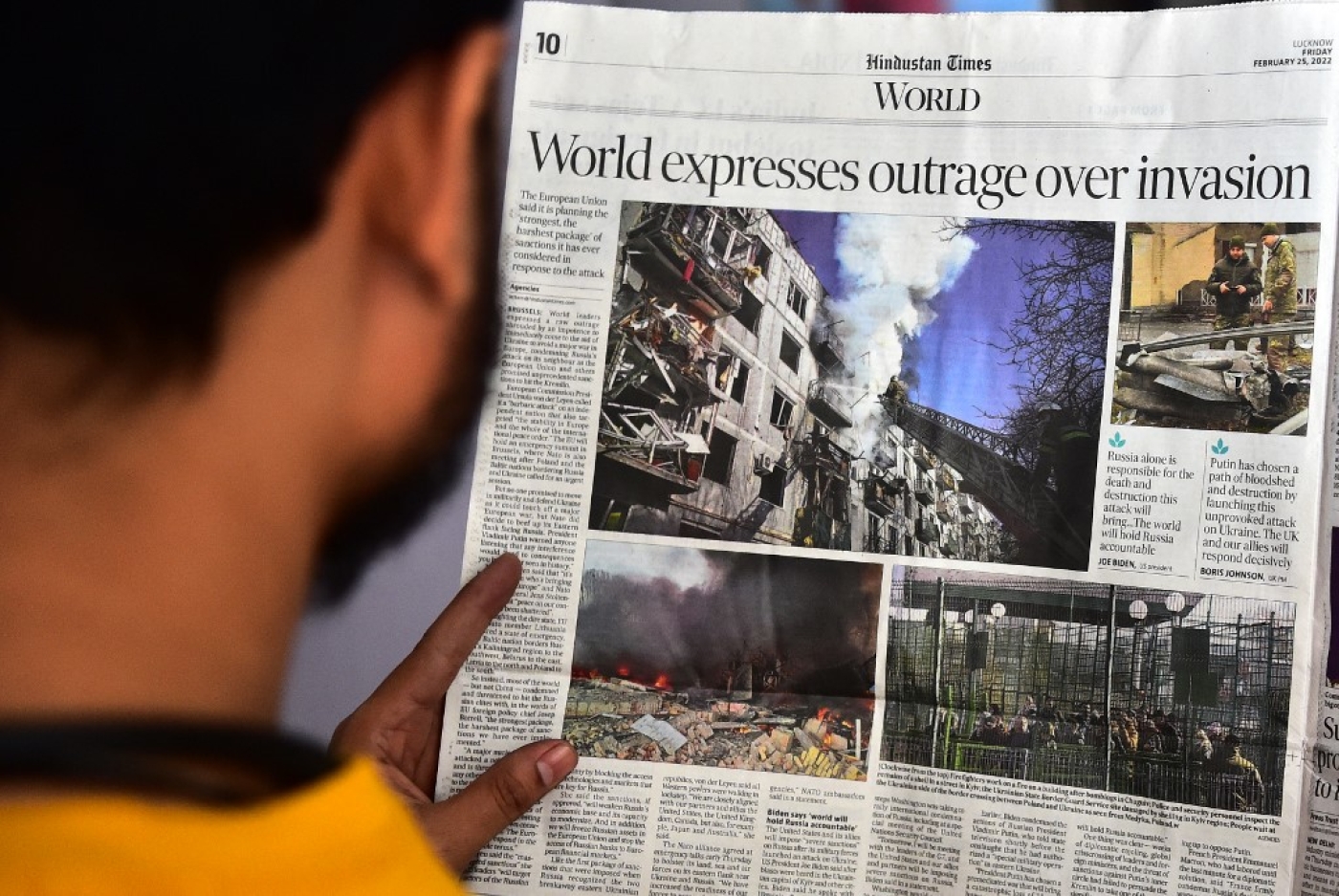 A man reads about the Russia-Ukraine war in Allahabad, India, on 25 February 2022 (AFP)

I have lost count of how many timely essays I have read protesting the barefaced duplicity of European and American politicians, and particularly media, who celebrate Ukrainians fighting against Russia’s invasion of their homeland, while renouncing and vilifying nearly identical acts by Afghans, Iraqis, Yemenis or Palestinians against the US, Israel or their client Arab states.

What is the difference between Ukrainians defending their homeland against Russia, and Afghans and Iraqis against the US, or Palestinians against Israel, or Yemenis against Saudi Arabia and the UAE? If we are not blinded by hatred and xenophobia, by imperial hubris and a false sense of civilisational superiority, and by a nasty streak of white supremacist racism, then there should not be any difference between Iraqis, Palestinians, Yemenis or Ukrainians defending their homeland against foreign invasion and occupation.

I am not surprised to see that US and European pundits and politicians are racist hypocrites. Of course they are

But many European and American politicians and journalists are patently blinded; they do not see the rest of humanity as fully human. A countless number of essays by leading critical thinkers have recently called out this rank hypocrisy.

In the Guardian, Moustafa Bayoumi highlights “how Ukraine’s neighbors are now opening their doors to refugee flows, after demonizing and abusing refugees, especially Muslim and African refugees, for years”.

In Middle East Eye, Jonathan Cook observes that journalists are cheering on the arming of militias and civilian resistance in Ukraine, acts typically treated as “terrorism” in Middle Eastern states. Even more pointedly, he notes: “Condoleezza Rice, an architect of the criminal invasion of Iraq, has not been challenged by the media over her utter hypocrisy in agreeing that ‘When you invade a sovereign nation, that is a war crime.’ If that is the case - and international law says it is - then Rice herself should be on trial at the Hague.”

Also in Middle East Eye, Peter Oborne points to the “blatant racism of the West” as it rushes to aid Ukraine against a foreign invader, while failing to prioritise mercy missions to countries such as Yemen, Gaza and Syria. In Al Jazeera, Patrick Gathara highlights the “racist exceptionalism” on display amid the Russia-Ukraine war, while a piece by Andrew Mitrovica sarcastically notes that “some lives are more valuable than others - according to Western media’s coverage of the Ukraine war”.

The list goes on. People are disgusted and fed up with the baldfaced vulgarity of pundits, reporters, editorial boards and politicians alike. Articles calling attention to this hypocrisy receive thousands of likes and retweets. But should we really be so aghast to see European and American journalists and politicians being who and what they are - constitutionally racist to the bone?

Let me put it bluntly: I am not surprised to see that US and European pundits and politicians are racist hypocrites. Of course they are. I am just surprised by the reactions of critical thinkers of my own ranks and convictions. Why are they surprised, aghast, plaintive? Why, in short, are they disappointed? Did they expect differently, and if so, why?

Personally, I have never been surprised to see images of Israelis picnicking on a hill, drinking champagne or sipping cappuccino, as they watch their army butcher Palestinians in Gaza. I have always known that many do not even see Arabs as human beings.

Has it not become abundantly clear by now that the idea of journalistic objectivity, neutrality and fairness is a bad joke? When we write articles pointing out such vulgar hypocrisies, to whom are we really talking and trying to convince? What is the point of this repeated preaching to the choir?

A whole generation of “postcolonial thinkers” from South Asia and Africa have made their academic careers out of being disappointed at Europeans for creating what they believe to be “universal” ideals and concepts, and yet not applying them to people they have brutalised and conquered. Yet such principles and ideals were never universal. They were always European, Christian, white supremacist, xenophobic, homophobic, antisemitic and Islamophobic.

Seeing other races and cultures as subhuman is written deeply into celebrated European philosophies. Enlightenment thinker Immanuel Kant once wrote about a Black carpenter: “It might be that there was something in this which perhaps deserved to be considered; but in short, this fellow was very black from head to foot, a clear proof that what he said was stupid.” 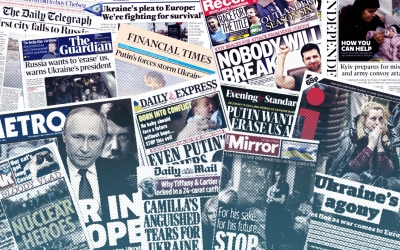 Indeed, many European philosophers thought non-Europeans were subhuman - as do millions of Europeans and Americans who are philosophically beholden to them. But my concern is not with them; it is with those who seem so utterly disappointed that Europeans do not live by their own standards. I believe they do.

I don’t think Americans and Europeans are being hypocritical about Ukraine at all. In fact, they are being very consistent in their racist, white supremacism. How many times and in how many places must we see this before it finally sinks in?

We must stop thinking European “values” are universal. We must learn and understand that they are exclusively European, and for Europeans alone.

That recognition does not compromise our ability to have a humane reaction to ugly or uplifting realities around us. I am severely critical of the Russian thuggery in Ukraine, and I fully support Ukrainians defending their homeland, as I do Afghans, Iraqis, Yemenis or Palestinians. But this is not out of any false assumption of the universality of European humanism. I am not partaking in western “values” when I express such reactions. I do so strictly as a Shia Muslim and as an Iranian - and entirely based on my own moral, political, cultural and civilisational convictions.

The very name “Europe” is an icon of racism and white supremacy. Yes, there is a civilisation to that name, too; but as philosopher Walter Benjamin said: “There is no document of civilisation which is not at the same time a document of barbarism.” Europeans are the beneficiaries of their own civilisation, and people around the globe are at the mercy of their barbarism.

End of conversation. Wouldn’t you say so? 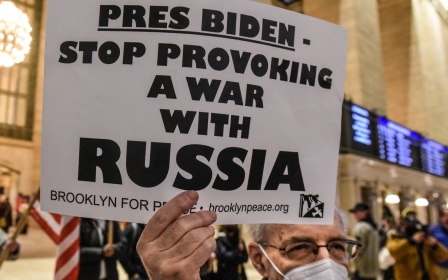 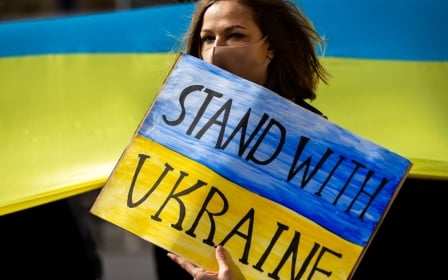 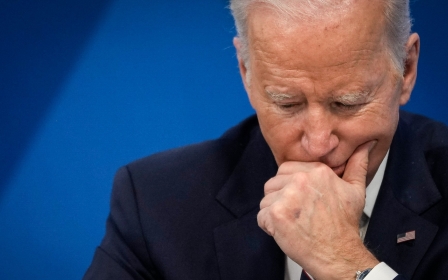 Russia-Ukraine war
In the Ukraine crisis, the West sees its chance for redemption over Iraq
Andrew Hammond