Seven years on: Why Tunisians are still angry

Sami Hamdi
Neglect, regionalism and disappointment at Nahda's failure to meet people's expectations have all contributed to the latest wave of popular resentment in Tunisia 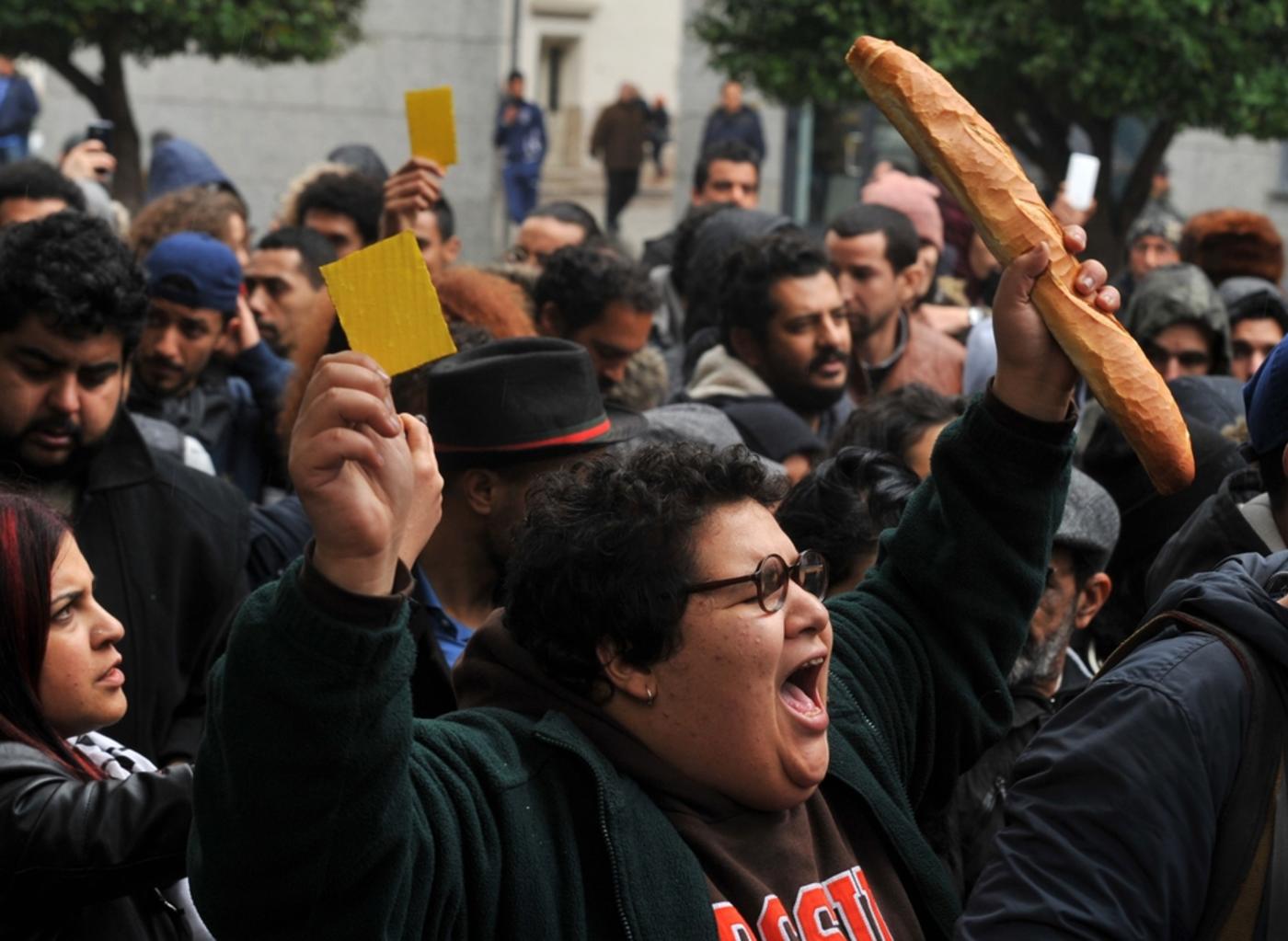 Tunisians are in a renewed state of anger. During the past few days, protestors took to the streets across the country, with over 300 arrested by security forces. Their demand remains the same as in 2011: employment.

However, although the slogan is simple, the dynamics behind the protests and the situation in Tunisia that has sparked such discontent is far more complex.

Tunisia is in an impossible economic situation. With its tourism sector that employs more than 200,000 people held ransom by an increasingly cautious Europe, and the wider economy by a $2.8bn IMF loan that imposes crippling austerity measures, the Tunisian government finds its economic options limited.

This leaves little room to invest in the vast and underdeveloped central and southern areas that make up the hotbed of simmering discontent and despair.

The protests offer an opportunity to rally the divided central areas and, as always with Tunisian politics, nothing is impossible

This situation is compounded by an embedded regionalism that has festered for over 60 years. Since independence, every president and prime minister has hailed from Sousse, Monastir or one of the other coastal cities.

All the developed cities are along the coast, while the inner regions have borne the brunt of economic neglect. In the central and southern areas, this policy is referred to as hogra (to be ignored in arrogance).

This sentiment of hogra is most pronounced in the surreal disconnect between glossy dance festivals, game shows, expensive party conferences broadcast on TV channels like Wataniya, Hannibal, Nessma, Hiwar al-Tounsi, and the conditions in which viewers live, in run-down buildings, cafes crowded with unemployed youths, and litter as far as the eye can see.

Those watching in one of these run-down cafes in Sidi Bouzid or Kasserine or Tattaouine ask: "Is this really Tunisia?"

Additionally, there is a pervasive feeling that the elites simply do not empathise. When in need of medical treatment, France is their preferred destination. To the Tunisians who live in the neglected regions, this is perhaps the clearest indictment of the country's medical services.

The carné system of employment-based healthcare is prohibitive given that an overwhelming number of people in the poorer areas simply do not have it, nor qualify for the card due to a lack of jobs, denying thousands access to basic medical treatment.

Coupled with chronic unemployment, not only is seeing a doctor difficult, so is buying medicine.

If this were not enough, large swathes of communities across the central and southern areas do not have access to basic sanitary and water facilities resulting in unnecessary deaths that are declared an unfortunate symptom of difficult times.

With unemployment soaring to 14 percent (with a higher rate among Tunisian youths), a prevailing sense of hopelessness and neglect, rising suicide rates and a sharp increase in the price of everyday goods, Tunisians appear to be in an endless cycle of despair that shows no sign of ending.

If there was any hope, it was in the Nahda party. Nahda was swept into power in the elections following the 2011 revolution. However, optimism has been replaced with a perception that Nahda, which was supposed to be the country's saviour, was more concerned with political manoeuvring than implementing any serious economic policies.

A disastrous three years, that saw Nahda' Interior Minister, Ali Araiedh, justify the security forces opening fire on protestors, as well as Nahda Prime Minister Hamadi Jebali’s derogatory comments of Sidi Bouzid voters who did not vote for his party, served as a grim reminder of the former regime. And to cap it all came the selection of Beji Caid Essebsi’s Nidaa Tunis (Essebsi was the speaker of parliament when Ben Ali came to power in the late 80s) as a president.

Nahda has some justification for seeking to embed itself politically. The party found itself having to navigate the repercussions of the military coup in Egypt in 2013 that saw the overthrow of the Muslim Brotherhood's Mohamed Morsi as well as the wider regional backlash against the Islamists.

The party opted for a conciliatory policy of collaboration first with Mustapha Ben Jafar and former president Moncef Marzouki in the first years following the revolution, and then with Beji Caid Essebsi post-2014.

However, the party has borne the brunt of popular dissatisfaction at the disparity between expectations following the revolution and the reality on the ground, reflected in the party losing its majority in the 2014 elections to Nidaa Tunis.

Nahda remains unsure what to make of the protests. Although the party does not dispute the reasons for them, it remains fully aware that it is being perceived as the key partner to this government and to Essebsi's reign in general.

To back the protests risks rupturing the delicate relationship between Nahda and Nidaa, which Nahda may well pay for if the protests fizzle out. To stand with the government, however, has dire consequences for the party if the protests take on a larger and more potent dynamic.

Moreover, with Essebsi's son Hafedh vying to be his father's successor, several factors such as the fact that some Tunisian businessmen are "investing" in politics, outside interference from the UAE, and the impact of Libya's civil war and the influx of smugglers and refugees, Tunisian politics for any party is akin to walking across hot coals.

It is unlikely that these protests will bring about any real change. As Tunisia spirals into economic despair, the tragedy is that Chahed's government, which is desperate for investment, will seek to focus on the more attractive and already developed coastal cities as opposed to the inner regions that suffer from chronic neglect, poor infrastructure, broken roads, and lack of efficient transportation networks that impact negatively on trade.

Moreover, the political landscape remains unchanged. Nidaa Tunis takes comfort in its wide power base in the north. Nahda enjoys an impenetrable stronghold in the south.

However, the protests offer an opportunity to rally the divided central areas and, as always with Tunisian politics, nothing is impossible.

With shocking results in the 2014 presidential elections including Sidi Bouzid’s very own candidate, Hechmi Hamdi, coming fourth, and leftist Jabha Chaabiya's Hamma al-Hammami (Popular Front) occupying the third spot on the list of candidates, there is a very real possibility that one of these two could well capitalise on the rampant discontent directed at both Nidaa and Nahda, and go on to unite the votes of the central areas in the presidential elections expected in 2018-19.

Such a feat, which would translate to more than a million votes, would amount to a very real challenge to the established powers and offer the prospect of genuine change, however good or bad.

- Sami Hamdi : is the Editor-in-Chief of the International Interest. An experienced geopolitical risk consultant.He has extensive experience in the MENA region, having been a television reporter and talk-show host for over 10 years.

Photo: Tunisian protesters shout slogans outside the governorate's offices in Tunis during a demonstration over price hikes and austerity measures on January 12, 2018 (AFP) 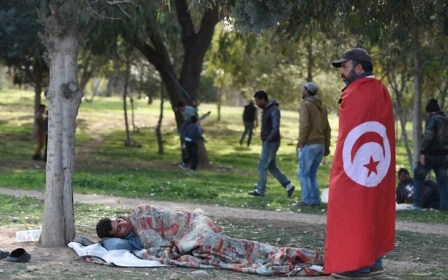 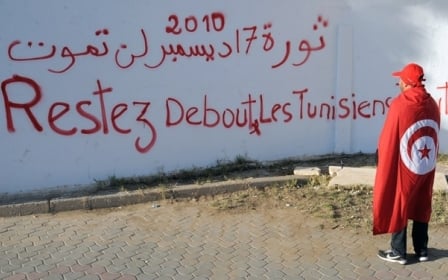