Azad Essa
South Africa's struggle credentials, 'miracle' transition and human rights centred foreign policy was surely enough to make it a dream mediator to the Palestine-Israel conflict. Not any more 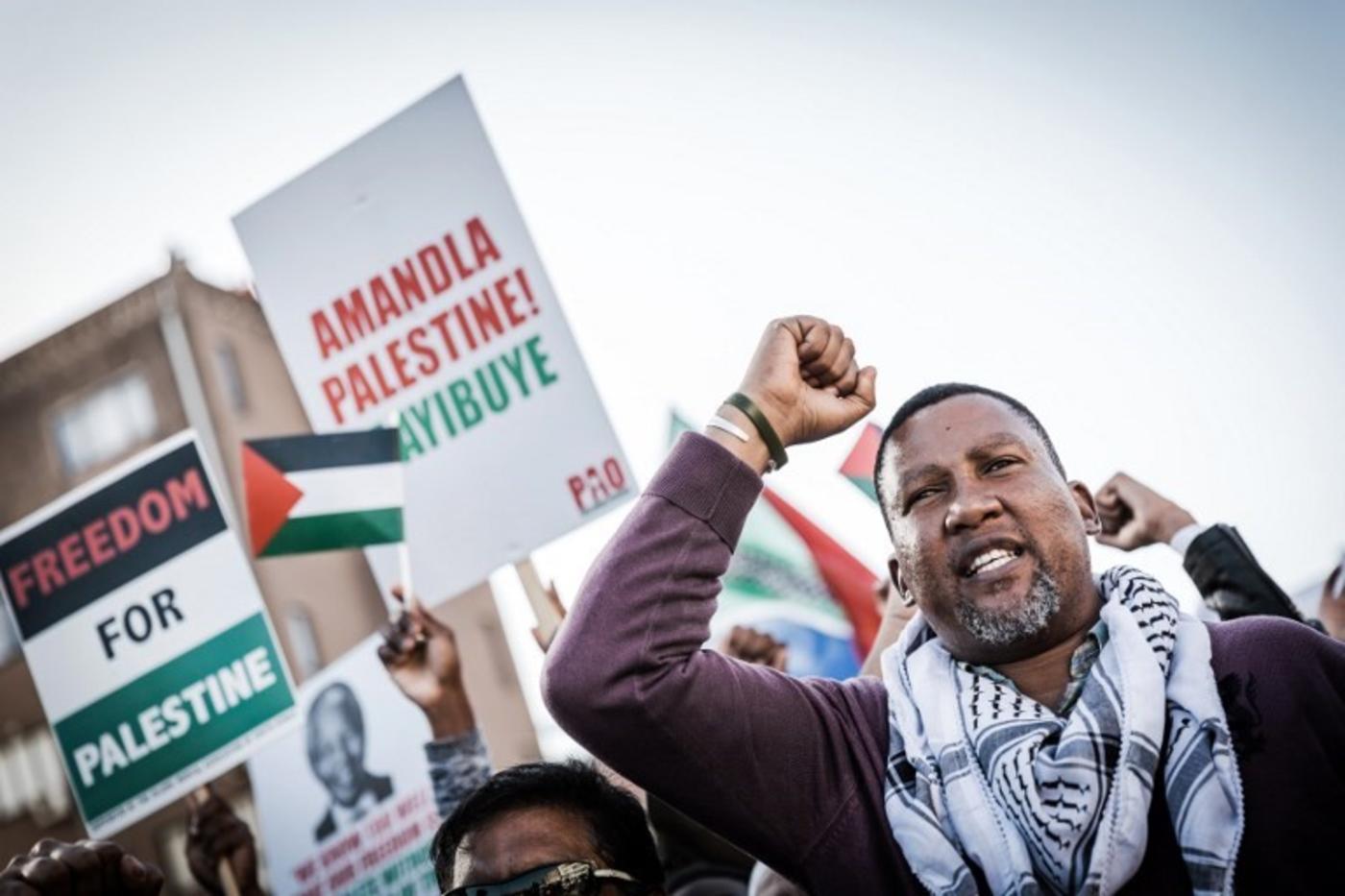 Post-apartheid South Africa is the land of duplicity. Be it on land reform, on equality, on justice or the economy. Progressive policies are rarely followed through in practice.

And so, too, when it comes to the South African government’s stance on Israel.

On 23 September, Sisa Ngombane, South Africa’s ambassador to Israel, returned to Tel Aviv, some four months after he was recalled in response to Israel’s brutal actions against Palestinian peaceful protesters participating in the Great March of Return in Gaza along the separation barrier with Israel.

At the time around 41 Palestinians had been killed by Israeli soldiers. Today, that number stands at 193 killed and thousands injured. Ngombane’s recall, at the time, was viewed as part of the government’s pursuit of the African National Congress (ANC)’s resolutions in December 2017 to downgrade relations with Israel.

Commenting on the decision in July, South Africa’s foreign minister, Lindiwe Sisulu, described Israeli violations as having “been going on for a long time, and [that] we can’t be looking away."

"We are holding back on our ambassador until we are certain that we are making headway. For us this is an unacceptable situation, completely unacceptable,” the minister said.

Israel and South Africa have relations that date back to 1948, when the apartheid government became the seventh country to recognise the state of Israel. When the world grew increasingly hostile towards apartheid South Africa in the late 60s and 70s, it was Israel that remained among its strongest allies.

The connections, synergies and similar struggles of the Palestinian Liberation Organisation (PLO) and the African National Congress (ANC), post-apartheid South Africa's ruling party, meant that when apartheid collapsed, the South African government ensured that the Palestinian cause would become a central tenet of its foreign policy.

But while the South African government have consistently called out Israel for its occupation and crimes against the Palestinians, it has also found economic and diplomatic benefit in maintaining healthy relations with Israel.

In a statement released on 25 September, presumably as a result of a stream of outrage from civil society organisations, the Department of International Relations and Cooperation (Dirco) said that the ambassador "travelled to Israel to deal with urgent family and personal issues". The statement added that he was "still recalled for consultations and has not resumed his duties as an Ambassador for South Africa in Israel."

But a number of questions, that poke holes in the official and clumsy narrative advanced by the South African government, remain unanswered.

For starters, if the ambassador returned for private reasons, why was this not declared at the get-go, before he went to Tel Aviv? Secondly, if he is returning to handle private affairs, why were the Israelis sent an official letter announcing his return to the country? Thirdly, how can South Africans be assured that he won’t engage in any formal activities while he is in Tel Aviv, given that the diplomatic relations have not yet been downgraded nor has there been any announcement of a change to his mandate. He is "still recalled for consultations".

A number of questions, that poke holes in the official and clumsy narrative advanced by the South African government, remain unanswered

As the official communique from Dirco says: "Any change in status in our diplomatic relations with the State of Israel will be communicated by the department after due consultations with the President of South Africa."

Dirco spokesperson Ndivhuwo Mabaya told MEE that a second letter had been sent to Israeli foreign ministry clarifying Ngombane's return was for personal reasons. Mabaya declined to share the contents of the letter but said his department had "wanted to clear it that he is not on formal duty [but] to us the letter was clear".

Middle East Eye is yet to receive confirmation from the Israeli foreign ministry that they had received a second letter from the South African government.

Dirco has repeatedly said that the ambassador had been recalled for "consultations" but as of yet there is no timeline as to when a decision would be made on diplomatic relations. According to Mabaya, multiple stakeholders would need to be consulted, including cabinet and parliament, before the president can make the final decision about the status of the mission.

Ever since the ANC’s historic resolutions to downgrade relations with Israel late last year, observers have been waiting for some indication that relations would be downgraded. Even if Pretoria has been fairly consistent in condemning Israeli crimes against Palestinians, there is no evidence to suggest that the South African government has any intentions to isolate that country.

It was in 2012 that the ANC resolved to endorse the Boycott Divestment and Sanction (BDS) campaign but there has been no movement on this. Instead, Ngombane, during his four years as ambassador, has called for increased trade between the two countries.

Time and again he has expressed sympathy with the Israeli narrative, speaking on one occasion of having been shocked by air raid sirens in Tel Aviv. He has never been held accountable by Dirco or the ANC for holding positions that contradicted the government or the ANC.

This duplicity has become part and parcel of South Africa’s foreign policy. Even though it's a signatory to the Arms Trade Treaty, South Africa has cooperated militarily with South Sudan even when the latter used child soldiers in the civil war, and continues to sell arms to Gulf nations currently waging a devastating war on Yemen.

South Africa's president, Cyril Ramaphosa, seems to be a proponent of this duplicity, too. The way in which he chose to talk about the Palestine-Israel conflict demonstrated this government’s two-faced approach towards the issue. Addressing a Jewish community gathering in mid-September, Ramaphosa described how the Jewish community has an "affinity and a commitment and a loyalty and a continued bond with the state of Israel."

"As South Africans, we recognise, acknowledge and applaud you for that because that is your destiny. But you are South Africans as well, at the same time.” Ramaphosa said.

Then, when he discussed resolving the conflict, he chose to describe Palestinian statehood as predicated on resolving Israel’s existential threat at the hands of its Arab neighbours. "We are clear and unequivocal in our support for the achievement of a Palestinian state alongside the right of the state of Israel to exist in peace and security with its neighbours," Ramaphosa said. "As we grapple with our own challenges, we must continue to play a constructive role in the quest for peace in the Middle East."

This "quest for peace" sounds noble, but as of now, no one seems to know what it means.

Ramaphosa didn’t use the words "occupation" or "settlements". His reference to apartheid was limited to South Africa’s past and not Israel’s present. Ramaphosa has previously said that “gross apartheid was taking place there [in Israel]” and described the ANC’s position as “cast in stone”.

And it is about to become even more complicated.

Angela Davis: 'This is the South Africa moment for the Palestinian people'
Read More »

Last June, South Africa was admitted to the UN Security Council (UNSC) for a two-year term in which its role is about to expand and its responsibilities multiply.

With Donald Trump’s administration pulling its funds from the United Nations Relief and Works Agency (UNRWA), the agency that supports Palestinian refugees, the US is on its last legs as the de facto mediator to this conflict. At one point, South Africa would have been touted as its natural replacement.

Its struggle credentials, "miracle" transition and human rights centred foreign policy was surely enough to make it a dream mediator to one of the most seemingly intractable conflicts.

But surely, not anymore.

- Azad Essa is a journalist based in New York City. He has written for Al Jazeera English, The Washington Post and The Guardian. Follow him on Twitter: @AzadEssa

Photo: Former South African President Nelson Mandela's grandson, Chief Mandla Mandela joins hundreds of demonstrators at an inter-denominational march of members of pro-Palestinian groups in Durban on 2 June 2018, to protest against Israel's handling of protests and violence in the Palestinian territories (AFP) 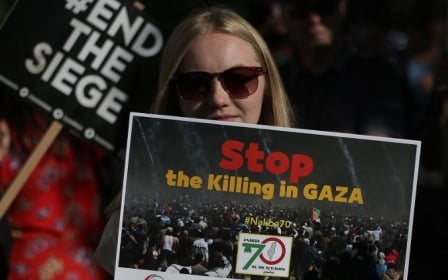