Those wearing the white helmets in Yemen’s war

Nawal al-Maghafi
Amidst all the tears, blood and destruction in Yemen, there are heroes who have dedicated their lives to helping fellow civilians 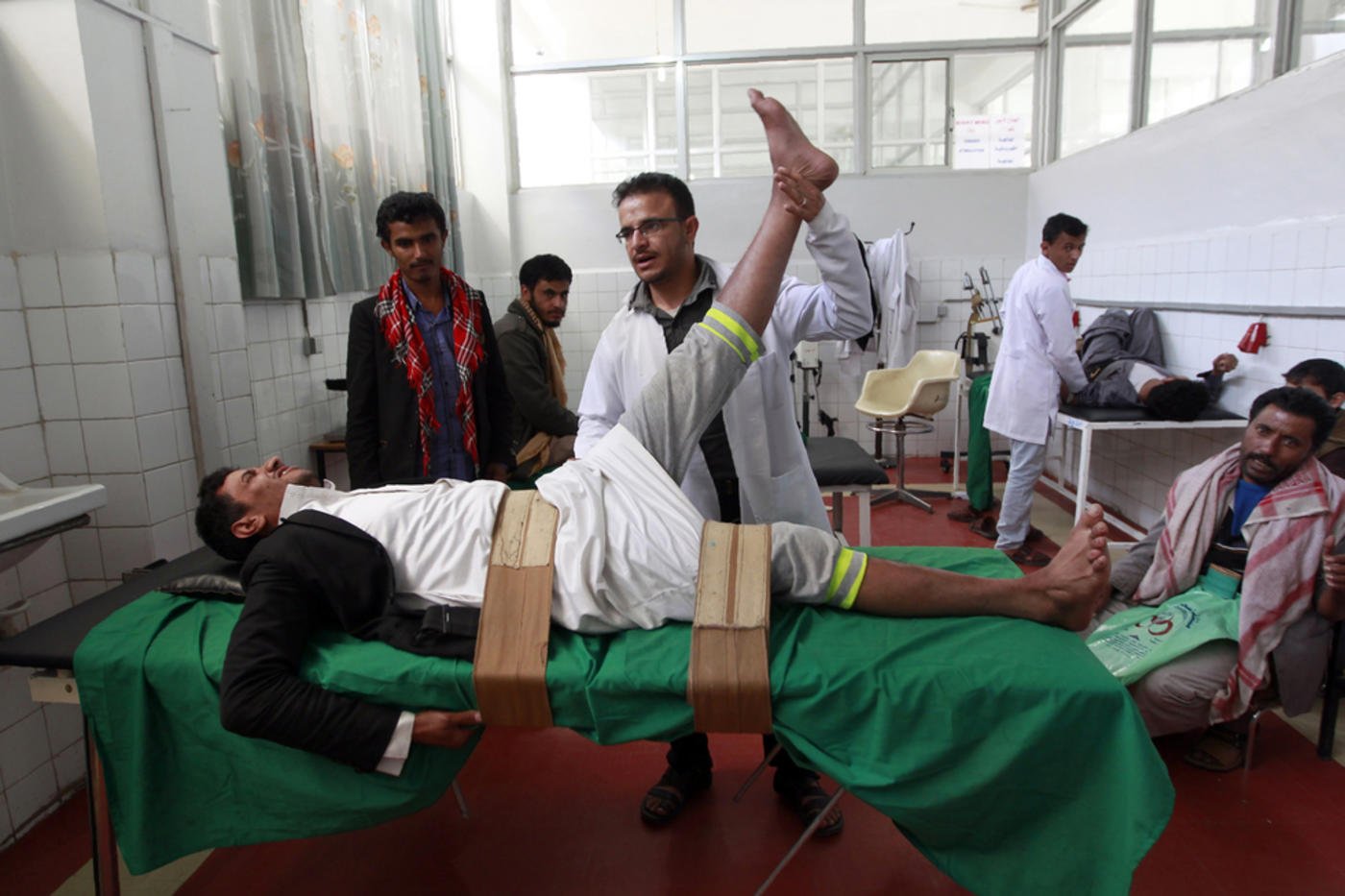 We are now a week into the second year of the Saudi-led coalition’s rather indecisive "Decisive Storm" operation. In a mere 12 months, Yemen has seen enough destruction and turmoil to set it back decades and mark it for generations to come. The numbers alone are harrowing: more than 8,100 people dead, 35,000 injured and 2.5 million displaced.

Yemen is one of the biggest man-made humanitarian catastrophes of this century, yet the response to it has been scant - a purposefully forgotten war.

However, amidst all the tears, blood and destruction, there are heroes, too; people who have dedicated their lives to helping other Yemenis and relieve the suffering of their fellow civilians. They are the ones wearing "white helmets".

I first met Abuthar al-Janadi in 2011, at the Yemen International Hospital in Taiz. At the time, he was at the forefront of the protests against the then-president Ali Abdullah Saleh. One of Yemen’s leading heart surgeons, al-Janadi had studied in Russia and worked abroad; but when the uprising against Saleh began, he felt compelled to return and support the movement for change.

He was definitely needed, too. At the time, I filmed him as he treated wounded protesters in Change Square, many of whom had been injured during what is now infamously known as the "Burning of Taiz" day. His optimism was unwavering, however.

In 2011-2, during the national dialogue when the new constitution was being drafted, al-Janadi left for Turkey to resume his professional career. "My work was done, the revolution had succeeded and we were building a new future for Yemen, so it was time for me to go and gain more skills," he had said at the time. Little did he know that, months later, he would be desperately needed again by his country.

Over a year ago, a Saudi-led coalition of 10 countries launched a military campaign in support of the Yemeni government and against Houthi militias who had taken over the state’s institutions and kept the president hostage in his own home. What was meant to be a quick decisive war, however, has now lasted well over a year, with both sides in the conflict facing war crimes accusations.

Al-Janadi returned to Yemen right away, he went back to his hometown of Taiz, which had borne the brunt of the devastation, including not only a blockade imposed on the country by the Saudi-led coalition, but another by Houthis militias on the city itself. This past year, the city has faced both a relentless aerial bombing campaign by the coalition, but ground shelling and sniper fire too by the Houthis, who are battling the Popular Resistance.

Al-Janadi was initially based at the Yemen International Hospital until it was forcibly shut down, having been directly targeted by air strikes. Of the city’s 40 hospitals, 37 are no longer operational, as well as 95 percent of all private health facilities, which were responsible for three quarters of healthcare provision in the community.

After the closure of the international hospital, al-Janadi knew it was urgent for him to move his work elsewhere. He decided, with a group of fellow doctors, to reopen the al-Jumhury hospital, which had closed but still had functioning machines. Located within striking distance of the frontline, the hospital receives patients of all affiliations and backgrounds. "We treat everyone," al-Janadi explained, "it is not for me to be political, I’m a doctor".

Not only does the team often operate under fire, but it does so largely without the most basic of hospital supplies: there are no oxygen cylinders, no water and, for the past year, no electricity.  Improvisation has become essential: many of the patients have had to endure undergoing critical surgery without the benefit of anaesthetic.

"I followed the deterioration of health conditions in my city feeling very sad. The number of martyrs has reached 1536, 148 of whom children and 135 women. More than 10,000 have been wounded by the end of last month, 288 of whom are currently in urgent need to travel abroad for further treatment," al-Janadi explains. "We do the best we can, but a lot of the time it is not enough."

What the world doesn’t want to know

In what has often been a brutal war that has taken a disproportionate toll on civilians, efforts to ensure official accountability have continuously been stalled. In September 2015, a draft Dutch resolution that instructed the UN’s human rights chief to send experts to investigate war crimes committed by both sides in Yemen was blocked. In a farcical move, the UN has instead accepted an investigation due to be conducted by the Yemeni government, despite the latter being a party in the conflict alongside the Saudis.

In the absence of an independent UN effort, global NGOs such as Amnesty International and Human Rights Watch (HRW), as well as local organisations such as Mwatana, have carried out investigations and research into reported violations of international humanitarian law.

In late November 2015, HRW released a report featuring first-hand interviews with victims, witnesses and medical staff. HRW’s investigators also visited sites that were hit by air strikes, including residential homes, city centre markets, a factory and a civilian prison. In all of these cases, HRW either found no evidence of a military target, or concluded that the attack had failed to distinguish between civilian and military targets.

Belkis Wille, HRW’s Yemen researcher, began her work in Yemen before the latest conflict began. "Before the beginning of this war, working in and on Yemen was wonderful, while of course challenging," she explains. "The people, particularly members of civil society and the human rights community, are wonderful to work with. I was so lucky that they welcomed me, trusted me, and worked alongside me as partners in this fight for human dignity."

Wille had been a witness to Yemen’s transitional period after Saleh’s ousting in 2012, and saw first-hand the efforts put into formulating a new constitution and a brighter future for Yemen. "Since the war," she reflects, "the saddest thing is to see that the incredibly hard work that all of Yemen, particularly civil society, put into the transitional period, despite the presence of spoilers, and into the drafting of a new constitution that among other things enshrines equality of women and prohibits discrimination, has been completely derailed."

Wille has become a very important voice on the war in Yemen, speaking out on humanitarian violations and resolute in holding both sides accountable for their crimes, especially when no one else seems inclined or willing to do so. However, like her counterparts in other NGOs, she has been facing great difficulty in confronting those involved. As she points out:

"The hardest thing at the moment, particularly when it comes to coalition violations, is that we cannot do our traditional advocacy, which includes us entering into a dialogue with the side perpetrating the violations, discussing our findings with them, presenting our recommendations, and seeing if we can encourage them to improve their behaviour. This is because the Saudis and the Emiratis, the most active members of the coalition, completely refuse to respond to any of our requests for information or for meetings."

Informing the world, even if no one wants to listen

While editors and the world’s largest media agencies have been busy with other conflicts around the world, Yemen’s crisis has sadly been "the forgotten war". However, there have been a handful of journalists who have been tirelessly working to get the country, and its people, in the headlines. A personal favourite is the work of Iona Craig, who has put her life at risk on numerous occasions, travelling across the country to seek out and tell the stories of the people of Yemen.

Others on the ground have resorted to social media to keep the world informed. Yemeni political analyst Hisham al-Omeisy’s Twitter account has been the go-to source for the latest updates on Yemen.

For al-Omeisy, the last 12 months have been about survival, protecting his children and keeping the world informed about the daily realities that his fellow Yemenis are living through. As he puts it: "To many of you, Yemen is some distant and remote land where war is least of your concern. To us, it's a nightmare. But where you would once in a blue moon wake up from a nightmare, we wake up into one that is our reality and go to sleep to forget, every single day for the past year."

This coming month, a new round of peace talks among the warring factions is due to start. For people like al-anady, al-Omeisy and Wille, these talks are not mere political theatre but an attempt to save a nation they have spent their lives fighting for.

But Wille knows that even if the talks end successfully, so much damage has been done that it will take generations to mend its effects. "This conflict has polarised the country so much, exacerbating political, religious and north vs south tensions. I am concerned about what the Yemen of tomorrow will look like given that reality, and the complete erosion of law and order over the last year." For al-Janadi, he knows that it is vital to negotiate: "Neither side will win, a complete victory is impossible, but as they continue to fight…we will lose everything and I will continue to receive the wounded and dead."

Image: A Yemeni physiotherapist helps a man, who was injured during the ongoing conflict in the country, during his physical training at a clinic for prosthetic limbs on February 20, 2016 in the capital Sanaa. (AFP) Yemen War
Walking a tightrope: To be Yemeni, a journalist and objective
Nawal al-Maghafi