Trump in the Middle East: From 'America First' to Saudi and Israel first

Trita Parsi
Saudi and Israel are once again painting Iran as an existential threat to draw the US back to the region. But is that really in America's interests? 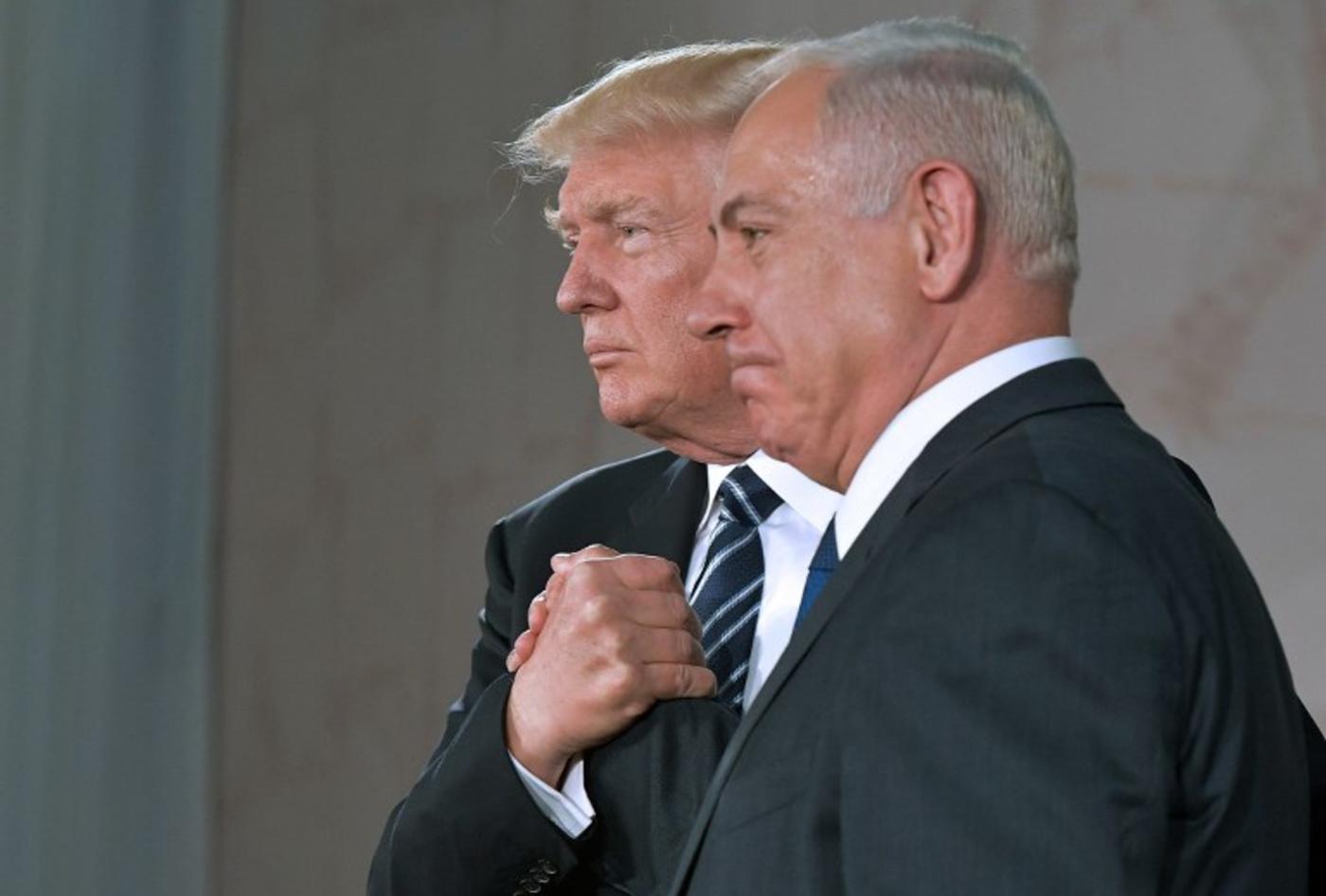 President Donald Trump’s visit to the Middle East has turned out as expected: no single act of outreach to the Muslim world could undo his fueling of Islamophobia and no amount of Iranophobia could cover up the irony of Trump and Saudi Arabia uniting against intolerance.

It is clear what Trump wanted from the trip: massive arms sales and Saudi investments in the US economy. But it is less clear why Saudi Arabia and Israel once again depict Iran as an existential threat even after Tehran’s nuclear programme has been checked.

The answer lies not in Iran’s regional policy, but Israel and Saudi Arabia’s wish for the US to re-establish hard, American hegemony in the Middle East. That is, for the United States to lead and underwrite the Herculean task of sorting out the chaos in the region. In short: Saudi and Israel first.

A key factor explaining the violence in the Middle East in the past few decades is that the region has lacked a sustainable, indigenous order. The process of establishing an order is by definition disruptive and the Middle East has almost continuously been in this state since the end of the Cold War.

While some American allies prefer that the US pays for the security of the region with its blood and treasure, few in Washington ask whether this policy benefits America

To make matters worse, the temporary equilibriums that briefly provided a resemblance of order were established and sustained by an external power - the United States - rather than by the states of the region themselves. As a result, these temporary periods of stability could only last as long as the external power was willing to sustain the order with its own blood and treasure.

This was certainly the case with Washington’s Dual Containment policy in the mid-1990s. After the end of the Cold War, the United States had the option of establishing a new, inclusive security architecture for the region. Instead, it opted to pursue an order centred on Israel, Egypt and Saudi Arabia while keeping Iran and Iraq in continued isolation.

Not surprisingly, Iran emerged as the main opponent to the American order as it viewed itself as a regional power that should help lead the region rather than be excluded from its security and political structures.

Iran calculated that the weakest link in the American strategy was the Israeli-Palestinian peace process. If the peace process failed, so would Washington’s efforts to establish an order based on Iran’s prolonged isolation. Iran began to heavily support Palestinian rejectionist groups who used terror against Israel in the hope of collapsing the peace negotiations.

As the US sought to isolate and contain Iran, and thwart its efforts to challenge the US-led order, Washington began portraying Iran as the number one threat to the region’s security, categorising it as a pariah and rogue state.

"Wherever you look, you find the evil hand of Iran in this region," Secretary of State Warren Christopher said in March 1995, essentially blaming all of the region’s woes on Tehran.

All-out isolation of Iran could not be achieved unless the broader international community began viewing the clerical regime as a rogue actor, which in turn necessitated them buying into the American and Israeli line that Iran was the root cause of all of the region’s ills.

Today, even prior to the visit to Saudi Arabia, Trump’s Defense Secretary Jim Mattis had begun echoing Warren Christopher's rhetoric on Iran.

“Everywhere you look if there is trouble in the region, you find Iran,” Mattis told reporters in Riyadh last week.

Just as Christopher and the Clinton administration’s approach towards Iran in the 1990s was heavily influenced by Israel, Mattis and the Trump administration appear to be heavily coloured - if not directed - by Saudi Arabia.

Washington’s talking points on Yemen are now mirror images of Riyadh's: the Houthi rebels in Yemen are Iranian proxies rather than independent Yemeni actors, the Yemeni civil war is the result of Iranian meddling rather than the result of a power struggle between various Yemeni factions, and the defeat of the Houthis is necessary to prevent “Iranian hegemony” in the region.

Mattis has even repeated the blatantly false assertion that the only country the Islamic State (IS) group hasn't attacked is Iran.

“I consider ISIS nothing more than an excuse for Iran to continue its mischief,” Mattis said in 2015. “Iran is not an enemy of ISIS; they have a lot to gain from the turmoil that ISIS creates…. I would just point out one question for you to look into. What is the one country in the Middle East that has not been attacked by ISIS? One. That is Iran. That is more than happenstance, I’m sure.”

In reality, not only has IS tried (and failed) to attack Iran, Tehran played a critical role in preventing IS from capturing Baghdad in 2014, according to Iraqi officials.

Music to Saudi and Israeli ears

Moreover, the Trump administration’s rhetoric increasingly paints Iran - and not IS - as the main threat in the region. Some supporters of the Trump administration have long played down the threat from IS, arguing that IS is a short-term problem, while Iran poses a longer term challenge precisely because of its opposition to American hegemony.

This flip flop echoes the line taken by Israel (and even some GCC countries) ever since the rise of IS. Israel is not threatened by Islamic State and Iran is a larger threat to the Jewish state, Israel’s Defence Minister Moshe Yaalon said in November 2015. The West's excessive focus on IS is benefiting Iran, Israel maintains, and gives Tehran an opportunity to portray itself as an ally of the West while in reality it continues to destabilise the region.

But just as Washington’s depiction of Iran as the culprit behind regional instability was widely exaggerated in the 1990s and aimed at masking US frustration with Iranian opposition to the specific regional order Washington preferred, Trump’s desire to blame Iran for the region’s instability and suggest that Iran has a tacit alliance with IS is equally - if not more - questionable.

Not because Iran is a constructive player in the Middle East (arguably, only Oman qualifies for that title) or because it hasn’t contributed to the region’s conflicts, but because putting all the blame at the feet of Tehran is simply too convenient.

It is, however, music to Saudi and Israeli ears. Trump dusting off Christopher’s talking points on Iran signals that he’s acquiescing to Saudi and Israeli demands to re-establish American hegemony in the Middle East and revert back to a policy of seeking Iran’s complete isolation.

"Until the Iranian regime is willing to be a partner for peace, all nations of conscience must work together to isolate it,” Trump said in Riyadh.

For the Saudis, this is more important than scrapping the nuclear deal because in reality it targets the very core of that agreement. The nuclear deal aimed to resolve the nuclear dispute with Iran in order to pave the way for a new, inclusive regional security dialogue - one that would include Iran. It signalled an end to hard American hegemony and the policy of Iranian isolation. A nightmare, in short, for the Saudis.

The nuclear deal signalled an end to hard American hegemony and the policy of Iranian isolation. A nightmare, in short, for the Saudis

But while it is understandable that some American allies prefer that the US pays for the security of the region with its blood and treasure, few in Washington ask whether this policy benefits America.

Clearly, the Middle East - with its vast energy resources - has been a strategic region for decades. And while the region had strong states, maintaining a balance of power was not too costly. But today, the value of hegemony in the region is questionable. The energy resources are less valuable. And the cost of security has skyrocketed as a result of the collapse of states and societies in the region. On top of that, no state or movement in the region is in a position to challenge the US global position.

Bottom line is: the cost-benefit analysis of hegemony in the Middle East no longer holds up.

But Trump doesn't seem to care. As long as he gets the arms sales, he seems indifferent to the cost this questionable alliance with Saudi Arabia will impose on the US in the long run.

It’s an aspect of the art of the deal only he seems to understand and very few question.

- Trita Parsi is the president of the National Iranian American Council and author of the forthcoming book  Losing an Enemy - Obama, Iran and the Triumph of Diplomacy (Yale University Press, 2017).

Photo: US President Donald Trump (L) and Israel's Prime Minister Benjamin Netanyahu shake hands after delivering a speech at the Israel Museum in Jerusalem on 23 May 2017 (AFP) 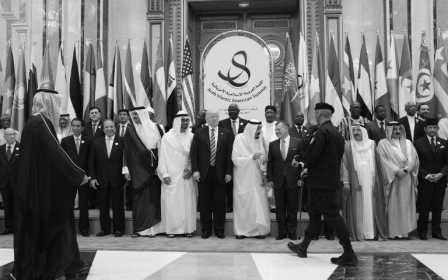 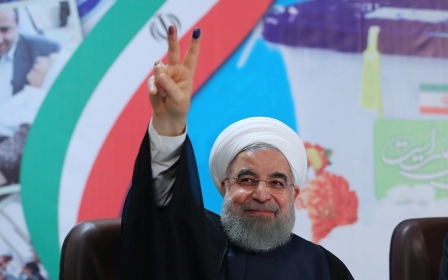 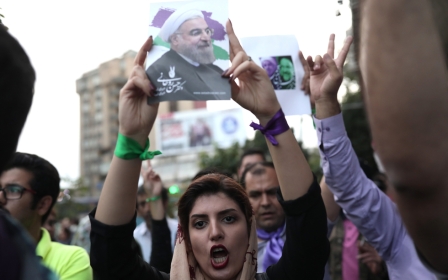 Inside Iran
Iran reformists sweep to power in major cities