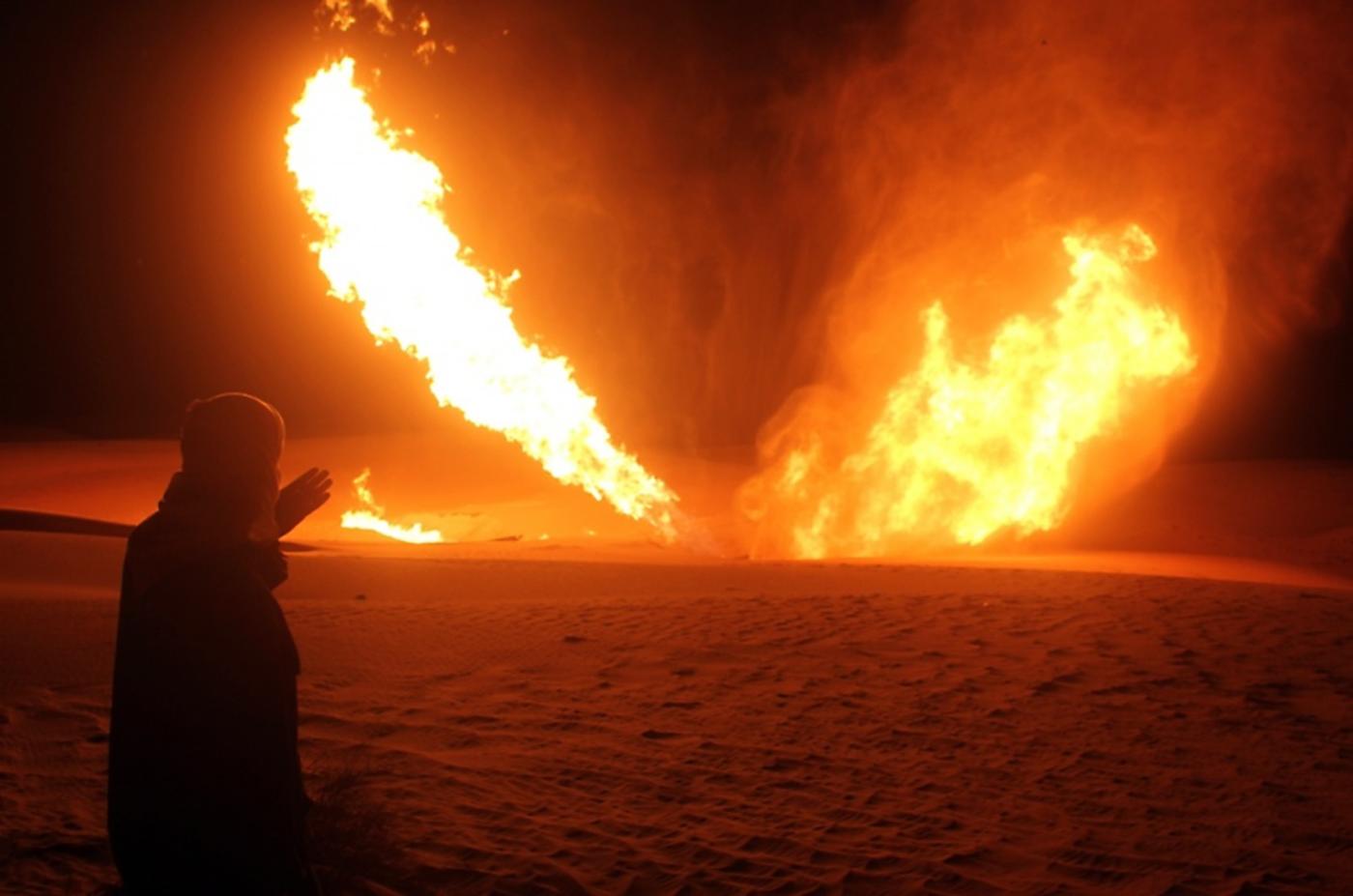 A new report by the US Army War College’s Strategic Studies Institute emphasises the need for “US security and military support” to its key allies in the Eastern Mediterranean, particularly Israel, over access to recent vast discoveries of regional oil and gas.

The Army study, released earlier in December 2014, concludes that extensive US military involvement “may prove essential in managing possible future conflict” in case of “an eruption of natural resource conflict in the East Mediterranean,” due to huge gas discoveries in recent years.

Visible US engagement is also necessary to ward off the regional encroachment of “emerging powers and potential new peace brokers such as Russia - which already entertains a strong interest in East Mediterranean gas developments - and notably China.”

Fossil fuel bonanza in the Levant

Since 2000, the Levant basin - an area encompassing the offshore territories of Israel, Palestine, Cyprus, Turkey, Egypt, Syria, and Lebanon - has been estimated to hold as much as 1.7 bn barrels of oil and up to 122 trillion cubic feet (tcf) of natural gas. As much of the region’s potential resources remain undiscovered, geologists believe this could be just a third of the total quantities of fossil fuels in the Levant.

The new US Army report argues that these hydrocarbon discoveries are of “tremendous economic and geostrategic significance,” not just for its allies, but for the United States itself. Israel especially stands to “gain considerably from their newly discovered gas wealth” in terms of cost-effective energy for domestic consumption and revenues from gas exports.

But while the discoveries offer the prospect for closer regional cooperation, they also raise “the potential for conflict over these valuable resources.” The potential for resource conflicts over oil and gas relates directly to intractable border conflicts between Israel, the Palestinians, Lebanon and Syria, as well as the unresolved Cypriot question between Greece and Turkey. US interests are to minimise the risk of conflict between its core allies, while maximising their capacity to exploit these resources.

“Israel, Cyprus, and Turkey are key strategic US allies,” the report says. “Neighbouring Egypt, Syria and Lebanon play important roles from the European and US perspective, both as direct neighbours to Israel and the Palestinian Territories as well as because of their strategically important location as the geographic interconnection between Europe, North Africa, and the Middle East.”

The new US Army report is authored by Mohammed al-Katiri and Laura al-Katiri. Mohammed al-Katiri was previously research director at the UK Ministry of Defence’s (MoD) Advanced Research and Assessment Group (ARAG), but now heads up two private intelligence consultancies, MENA Insight and the Conflict Studies Research Centre  (CSRC), both of which provide services to government and commercial sectors, including the oil and gas industry.

The Strategic Studies Institute (SSI) which published the report, calls itself an Army “think factory” for “commanders and civilian leaders.” SSI uses independent analysis to help “develop policy recommendations” for the US Army on national security and to “influence policy debate” across the military.

The SSI report on the risk of Middle East resource conflicts notes that Israel’s massive offshore gas discoveries “have yet to translate into proven gas reserves,” but that it’s total of 9.48 tcf of proven and 30 tcf estimated reserves, positions Israel “ahead of all East Mediterranean countries in terms of gas reserves and resource prospectivity.”

The Army report also reveals that Syria could hold significant offshore oil and gas potential. In 2007, before the outbreak of hostilities, President Bashar al-Assad launched a first bidding round to secure investment into new exploration efforts, and another in 2012 that was cancelled due to deteriorating security conditions.

“Once the Syria conflict is resolved, prospects for Syrian offshore production - provided commercial resources are found - are high,” observes the report.  Potential oil and gas resources can be developed “relatively smoothly once the political situation allows for any new exploration efforts in its offshore territories.”

The report also mentions significant gas finds in the offshore territories of Lebanon and Palestine, including the Gaza Marine, which holds over 1 tcf – production of which has been “obstruction by Israel over concerns regarding the flow of revenues to Palestinian stakeholders.” But in addition to the Gaza Marine, “Palestinian offshore territories near Gaza are believed to hold substantial hydrocarbon potential,” whose total quantities are still unknown because a lack of exploration there:

“Both Israel and Cyprus are key US allies and pillars of US foreign policy in the region: Israel, with its long history of close political ties with the United States, historically has stood at the heart of American efforts to secure regional peace; while Cyprus forms the most eastern part of Europe and is an important strategic location for both US and British military interests.”

The region faces four main potential arcs of conflict. Firstly, in Israel-Palestine, the US Army study warns that “the presence of valuable natural resources in disputed territory may further feed the conflict.”

Secondly, rival claims between Israel and Lebanon over maritime boundaries could “complicate” the development of regional offshore hydrocarbon resources and result in military confrontation.

Fourthly, in 2013 Israel granted oil exploration licenses in the Syrian-claimed Golan Heights, spelling “potential for another armed conflict between the two parties should substantial hydrocarbon resources be discovered.” According to a report to the UN Security Council in early December, Israel has been in regular contact with Syrian rebels, including Islamic State fighters, raising the question of Israel’s role in supporting anti-Assad extremists to cement its control of Golan’s potential fossil fuel resources.

The US Army study highlights a real risk that tensions across these flashpoints could escalate into a wider regional conflict:

“In the case of an armed conflict between Israel and Lebanon, the security of the wider Levant region could once again be at stake, with a possible escalation of the conflict into neighbouring Syria and the Palestinian Territories, as well as (with historical precedents) Jordan and Egypt. In combination, the pre-existing political problems in all of these countries – Syria destabilizing into de facto civil war, Egypt in the midst of political instability, the Palestinians and Lebanese lacking stable political cores – the potential for a new, escalating regional war is a threatening scenario indeed.”

War for peace (for gas)

To stave off this disturbing prospect, the US report recommends that Israel and other Levant gas hubs like Lebanon and Cyprus play a key role in exporting Eastern Mediterranean gas to their Arab neighbours, such as Egypt, Turkey and Jordan, given that Middle East demand for gas is projected to rise dramatically in coming decades.

Further, the report highlights the possibility of Israel piping gas to Turkey, where it can be exported to European markets, making Turkey a regional gas transhipment hub. This would allow both Turkey and Europe to wean off their Russian gas dependence, and integrate instead into a “peaceful” US-Israeli dominated regional energy architecture.

As has been confirmed by Quartet Middle East envoy Tony Blair’s energy advisor, Ariel Ezrahi, Gaza’s offshore gas resources are seen as a potential bridge to overcome popular Arab public opposition to gas deals with Israel. “Israeli as well as Palestinian offshore hydrocarbon resources could play a significant role in facilitating mutual trust and the willingness to cooperate,” the US Army study suggests, “including between Israel and a few of its other Arab neighbours, Jordan and Egypt.”

But ultimately this architecture cannot be installed without extensive US intervention of some kind. “US diplomatic and military support has a pivotal role to play in the East Mediterranean’s complex geopolitical landscape, and its importance will only grow as the value of the natural resources at stake increases,” concludes the Army report:

“US security and military support for its main allies in the case of an eruption of natural resource conflict in the East Mediterranean may prove essential in managing possible future conflict.”

Diplomatically, the US could play a significant role in mediating between the various parties to facilitate successful oil and gas development projects across the East Mediterranean, not just for “Israel’s sake,” but also to shore-up allies like Jordan and Egypt with “low-cost Israeli gas,” contributing to regional economic and thus political stability:

“US support - diplomatic and, where necessary, military - can form a potentially powerful element in the safeguarding of these long-term economic benefits, at little cost in relative terms.”

If regional tensions escalate though, the report warns that “the United States also holds an important military position that could have an impact in securing the East Mediterranean,” including “military training and equipment support” to defend Cyprus and Israel from attacks on “their energy infrastructure and gas developments.”

This Orwellian document thus reveals that in the name of maintaining regional peace, a new Great Game is at play. To counter Russian and Chinese influence while cementing influence over its Arab allies, US military strategists are contemplating the threat of war to redraw the Middle East’s energy architecture around Israel.

- Nafeez Ahmed PhD, is an investigative journalist, international security scholar and bestselling author who tracks what he calls the 'crisis of civilization.' He is a winner of the Project Censored Award for Outstanding Investigative Journalism for his Guardian reporting on the intersection of global ecological, energy and economic crises with regional geopolitics and conflicts. He has also written for The Independent, Sydney Morning Herald, The Age, The Scotsman, Foreign Policy, The Atlantic, Quartz, Prospect, New Statesman, Le Monde diplomatique, New Internationalist. His work on the root causes and covert operations linked to international terrorism officially contributed to the 9/11 Commission and the 7/7 Coroner’s Inquest.

Photo: An Egyptian man looks at flames rising from a pipeline that delivers gas to Israel and Jordan after it was hit by an explosion some 40 kilometres (25 miles) west of the town of Al-Arish in the north of the Sinai peninsula, early on 10 November, 2011 (AFP)