Trita Parsi
It may have been a 'dumpster fire' for the Trump administration and an embarrassment to Europe, but Israeli premier stands out as summit winner 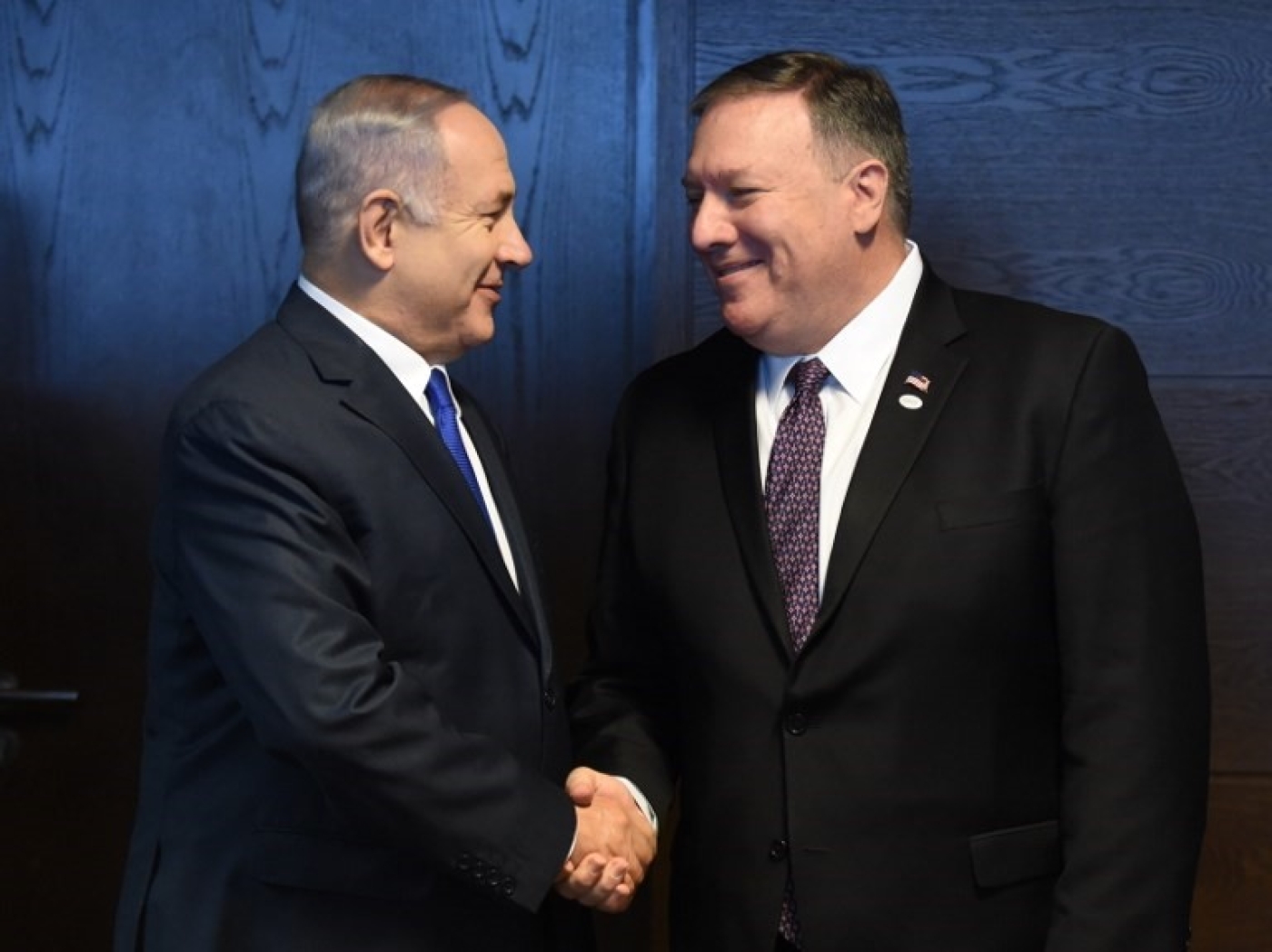 With a joint statement that did not even mention Iran, there is little doubt that the Trump administration's anti-Iran Warsaw summit was an abject failure - at least when measured against the objective of creating an anti-Iran alliance.

That, however, does not mean that the summit wasn't useful to some of its key supporters. Above all, Israeli Prime Minister Benjamin Netanyahu stands out as a clear winner of the failed summit.

As I have explained elsewhere, using an anti-Iranian alliance as an organising principle to unite Israel and the Arab states is not a new idea. It has been tried several times by the United States, going all the way back to the 1990s.

Indeed, the parallels between the language of the Trump administration today and that of senior Clinton officials in the mid-1990s are eerily similar. Then too, the US tried to sell a hysterically simplistic analysis of the region that identified Iran as the root cause of all problems.

"Wherever you look, you will find the evil hand of Iran in this region," then-secretary of state Warren Christopher said in 1995 as he tried to defend Washington's infatuation with Iran.

Echoing the same line of thinking, Secretary of State Mike Pompeo told reporters in Warsaw this week that: "You can't achieve peace and stability in the Middle East without confronting Iran."

Similar to today, this almost obsessive focus on Iran was sold to Washington by US allies who wanted the United States to use its power to tip the geopolitical scales in their favour, particularly in terms of weakening Iran and preventing the US and Iran from resolving their problems.

Which is precisely why the failure of the Warsaw summit does not mean that it lacked utility for Iran's geopolitical rivals in the region. Netanyahu, in particular, scored five central victories in Warsaw.

First and foremost, the summit provided Netanyahu with much-desired optics: the fact that Arab leaders were willing to share the stage with an Israeli prime minister at a summit that didn't even pretend to address the Palestinian issue clearly signalled that autocratic Arab rulers have openly abandoned the Palestinians.

To Netanyahu's supporters, this vindicated his strategy: patiently refusing to compromise with the Palestinians while aggressively expanding illegal Israeli settlements would eventually force the Arab side to succumb to Israel's demands and dominance.

"Yesterday was a historical turning point," Netanyahu proudly told reporters. "In a room of some 60 foreign ministers, the Israeli prime minister and foreign ministers of leading Arab countries stood together, and spoke with unusual force, clarity and unity against a common threat of the Iranian state."

Second, even short of establishing a real coalition against Iran, the summit succeeded in deepening US-Iran enmity and rendered any prospects for a rapprochement all the more implausible.

As long as US-Iran tensions remain high, Washington is further pushed away from any thaw with Tehran that could result in the US ceasing its unquestionable support for Israel. This fear of "abandonment" was a key factor behind Netanyahu's opposition to the 2015 Iran nuclear deal.

Shifting the balance of power

Third, increased US-Iran tensions also achieve another objective: it moves the US closer towards a military confrontation with Iran that for Netanyahu is the ultimate tool to shift the balance of power in the region in Israel's favour. Netanyahu's advocacy for a US-Iran war is neither new nor a secret.

At the summit, he told Israeli media that Arab states and Israel are coming together "in order to advance the common interest of war with Iran". On his Twitter account, he later changed the translation of his comment to read "common interest of combating Iran". 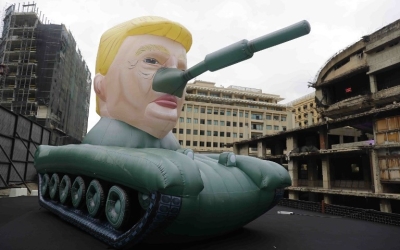 The US intelligence community has been very worried about Netanyahu's manoeuvres to drag the US into war with Iran. Last month, Dan Coats, the director of national intelligence, told the US Senate Select Committee on Intelligence that: "Iran seeks to avoid a major armed conflict with Israel" but that "Israeli strikes [in Syria] that result in Iranian casualties increase the likelihood of Iranian conventional retaliation against Israel."

Such an escalation sparked by Israel, in turn, carries a likelihood of the US getting dragged into the conflict. Much to Netanyahu's satisfaction, presumably.

Fourth, Netanyahu calculates that all of the above benefits him politically at home at a time when he is facing both a potential prison sentence for corruption charges and upcoming elections in April.

Finally, the Warsaw summit didn't just increase US-Iran tensions, it also intensified the rift between the US and the EU - and within the EU.

Vice President Mike Pence - standing on European soil - blasted the EU effort led by Germany, France and the UK to create an alternative payment system for legal trade with Iran, calling it an "ill-advised step that will only strengthen Iran, weaken the EU and create still more distance between Europe and America". 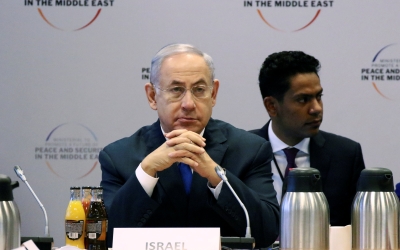 The Europeans, in turn, blasted the conference as "an unhelpful sideshow announced without any consultation or regard for America's traditional partners".

Netanyahu believes Israel benefits from widening the rift between the EU and the US, as it protects him from any remaining EU pressure on Israel to end the occupation of Palestine.

Like Trump, Netanyahu's goal has been to weaken and divide Europe, and like Trump, he has allied himself with the right-wing, anti-democratic governments in Poland and Hungary.

All in all, the Warsaw summit may have been a "dumpster fire" for the Trump administration and an embarrassment to Europe. But for Netanyahu, he could hardly have wished for a better gathering. 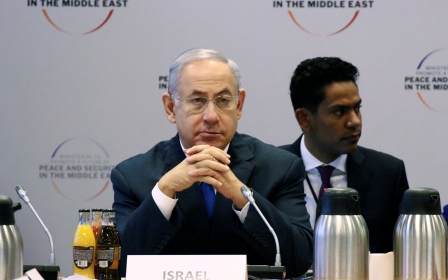 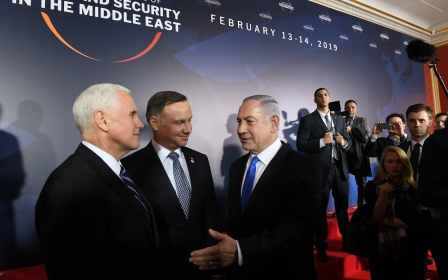 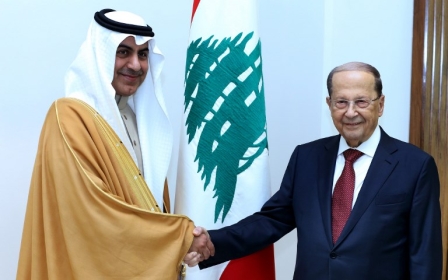