What Morocco's monarchy should do instead of repressing protesters 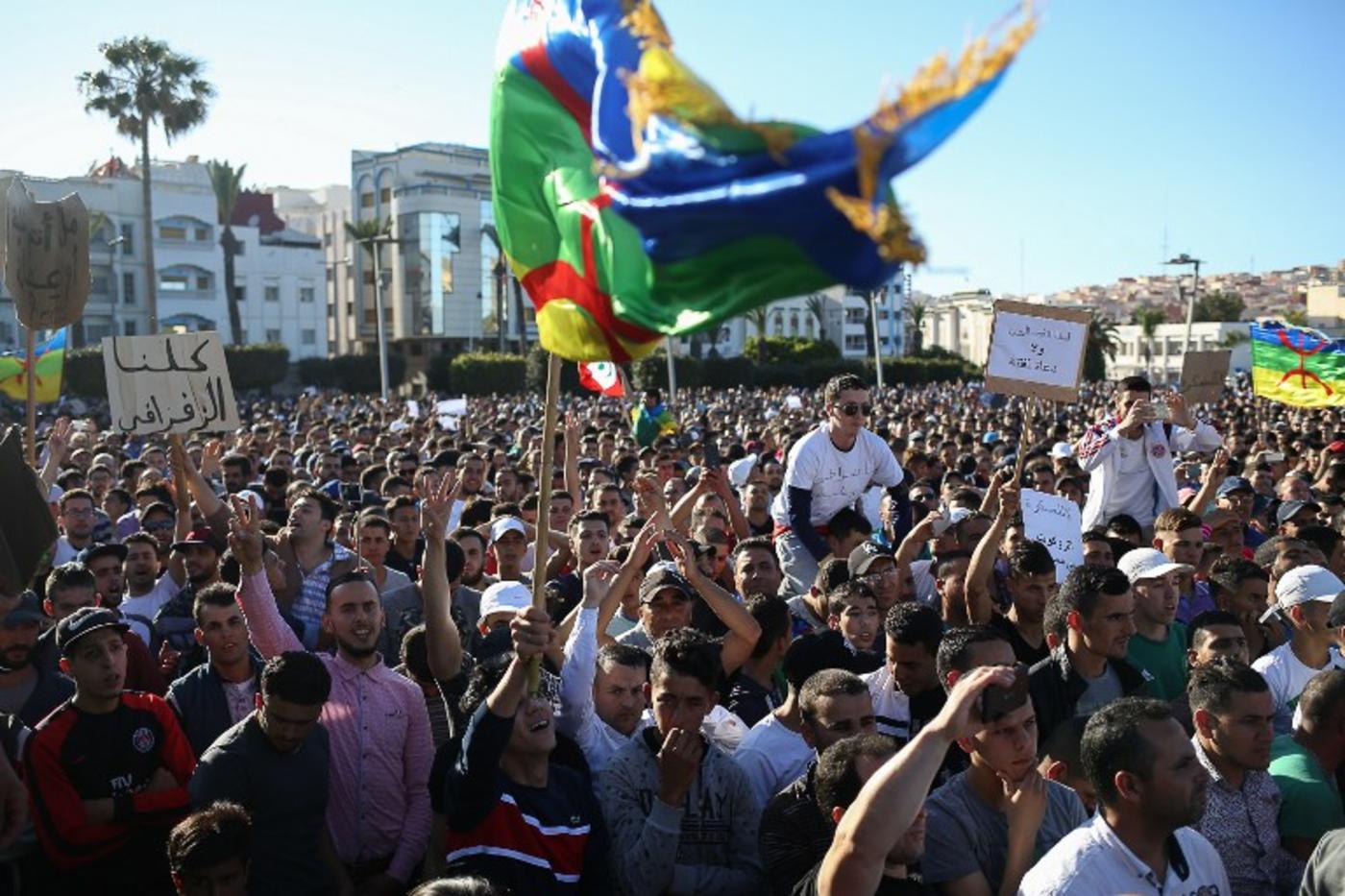 The ongoing protests in the Rif region of northwestern Morocco that erupted in October are the largest since the 20 February Movement protests in 2011. At their heart, they are about socio-economic grievances, but they could easily fuel wider political upheaval if escalations continue.

For decades, the central government has neglected this region, which has fostered distrust of state institutions among local residents. Given the tensions that already exist, the authorities' repressive response to the current protests might only lead to escalations and risk intensifying protesters' demands.

Whether events will lead to greater turmoil is uncertain, but it is clear that, after government parties labelled the protests as being driven by "separatists" and said they were "funded" by "foreign agents", relations between protesters and authorities are strained.

The trigger for these protests was the gruesome death of Mouhsine Fikri, a young fishmonger, who was crushed last October when he tried to save his goods from a garbage truck after they had been seized by the authorities.

The precise circumstances of his death are still unknown, but there is a widespread rumour that a policeman ordered the killing by saying "tahan-moo" (and also tweeting #طحن_مو), which means literally "crush his mother". Whatever the exact circumstances, it was an act that sparked nationwide outrage against authorities’ perpetual abuses.

After Fikri's death, King Mohammed VI called for a thorough investigation, which led to the arrest of some public servants, but this has not quelled protesters' anger. In response, demonstrators have called for comprehensive changes, including political reform, developments such as building hospitals and universities, and more investment in the Rif region, which has a high rate of youth unemployment.

However, the deeper reasons behind the ongoing protests lie in the region's political history. In the early 1920s, during the protectorate period when the country was divided between French and Spanish control, the Rif region (overseen by Madrid) declared independence from Morocco and established the "Rif Republic".

The newly created republic was headed by Muhammad Ibn 'Abd El-Karim El-Khattabi, a famous politician and military leader who had led a revolt against the Spanish colonisation of the Rif.

After years of war between Rifains and the Spanish (joined by the French), the republic was defeated and returned to the control of the monarchy. Its relationship with central government has remained strained ever since, even after Morocco declared independence in 1956, and especially after the government’s lethal crackdown during the 1958 and 1959 Rif revolts.

These historical events weigh heavy in the memory of Rifains, who have nurtured for decades feelings of victimisation and marginalisation. Recent events have only fuelled the old woes embedded in the region.

Yet there are deeper reasons beyond history for the current outrage, namely the anger of Moroccan citizens towards the increasing authoritarianism in the country and the administration’s abuse of power and corruption.

The protests have coincided with, and were sparked by, the six-month political deadlock that began after elections in October.

The absence of the government since then has hindered the possibility of a genuine engagement with protesters and their demands. It has also left a void that was filled by the Ministry of Interior using repressive measures like those seen when clashes erupted at a sit-in in Al-Hoceima on 5 February.

When similar protests erupted one year earlier in Tangier, the then prime minister, Abdelilah Benkirane, met with the local population and mediated a solution that defused tensions. But the current prime minister, Saad Dine El Othaman, lacks the charisma to lead such an initiative.

Corruption is not only present in the small bribes that riddle Morocco's public administration. It is also present in the country's political economic model

The protests have also been a result of the country's structural corruption. In 2016, Morocco ranked 90th out of 176 countries in the Transparency International Corruption Perception Index.

Corruption is not only present in the small bribes that riddle the administration, whereby civil servants benefit from bureaucracy. It is also present in Morocco's political-economic model, which is based on cronyism and rentierism rather than meritocracy and transparency.

Protesters have used Fikri's death as an example of structural corruption. They accept that he did not possess the correct authorisation from the Ministry of Maritime Fishing for his business (no easy task for a small businessman), but argue that abuse of power, impunity and the rule of law led to his death.

Corruption is just one facet of dysfunctional state institutions. Ironically, just two weeks before Fikri's death, King Mohammed made a speech in parliament calling for reform of the administration and warning against the exploitation of citizens.

The king strongly criticised the state administration's shortcomings, lack of efficiency and failure to deliver services to citizens. However, the speech has had no effect in deterring civil servants from abusing their power.

Dialogue instead of repression?

With the ongoing protests in the Rif, the challenge is no longer simply about conducting a reliable investigation into the death of Fikri, but also about focusing on how to solve the long-term grievances of this region.

The monarchy should urgently opt for dialogue instead of repression. As a sign of goodwill, the monarchy should address the protesters' demands to annul a royal decree of 1958 that designates El-Hoceima province (part of the Rif) as a military zone. This symbolic move would demonstrate that the monarchy is willing to turn the page of misunderstanding and might even attract investment to the region.

In the long-term, only comprehensive political and economic reforms can assuage the protesters' anger. In particular, the government should take its responsibility for overseeing public administration seriously. This will require the palace to stop intervening in day-to-day politics, which happens when cronies are nominated to key positions.

Whether this will be feasible will depend on the will of the palace and the government.

- Mohammed Masbah is an associate fellow at the MENA Programme of Chatham House as well as a junior research fellow at the Crown Center for Middle East Studies in the United States. Previously, he was a non-resident scholar at the Carnegie Middle East Center and a fellow at the German Institute for International and Security Affairs (SWP). Dr Masbah’s research interests are in the area of Salafism, political Islam, authoritarianism and youth movements in North Africa. He earned his PhD in Sociology from Mohammad V University in Rabat.

Photo: Moroccans take part in a demonstration against corruption, repression and unemployment in the northern city of al-Hoceima on 18 May 2017 (AFP) 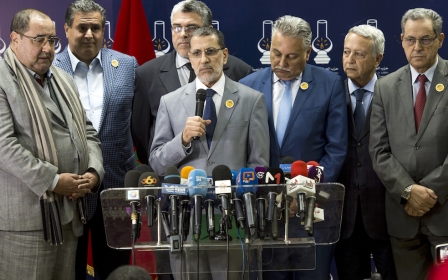 Inside Morocco
Morocco's new coalition: How change of leadership broke months of deadlock 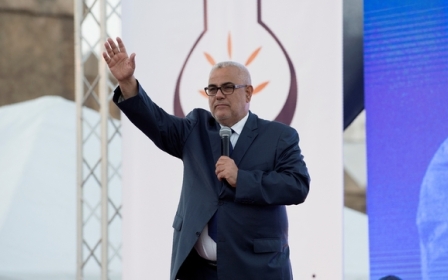 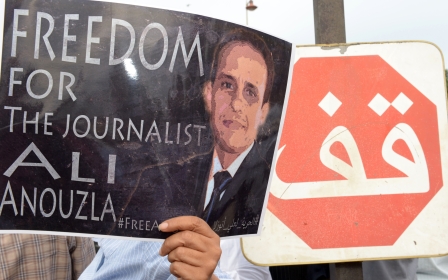 Media
A free press in Morocco? Up to a point, Lord Copper