Why Khaled Ali is a source of anxiety for Sisi's regime It was with battling feelings of fury and capitulation that I read the news last week about the conviction of Khaled Ali, a lawyer, activist and advocate for government reform, social justice and labour issues. Ali was sentenced to three months in prison on a charge of “offending public decency”, which was brought last May.

The shambolic case for which he received this sentence was brought by a private citizen who accused him of making an "obscene hand gesture" as he celebrated his victory in a case he had brought against the government for agreeing to hand over the two Red Sea Islands of Tiran and Sanafir to Saudi Arabia in April 2016.

The decision sparked the largest public protests against the coup-leader-cum-President Abdel Fattah al-Sisi. Although that victory was later reversed on appeal by the Cairo Court of Urgent Matters and endorsed by a parliamentary majority, it represented a sharp thorn in the side of the regime, as it became a source of tension with its main benefactors in Riyadh.

As Sisi's regime has shown over and over again, it has zero tolerance for dissent, a policy that has led to the most brutal crackdown on opposition across the political spectrum in the past century.

The fact that Ali was convicted now comes as no surprise. In less than a year, Egyptians are expected to return to the polls to “elect” our next president (as if nobody knows who that will be). Ali’s conviction, if upheld following an appeal process, will however, obstruct his eligibility to join the so-called “presidential race”.

In 2012, the day after he turned 40, Ali announced his bid for the presidency, becoming the youngest candidate to qualify for the race. Like nine other candidates who contested Egypt’s only democratic elections that year, he lost to the Muslim Brotherhood’s presidential candidate Mohamed Morsi.

He ran as an independent at a chaotic time when political alliances worked against people like him, despite his unwavering dedication and resolve. He belonged to a niche of true revolutionaries who worked tirelessly towards their ideals before and after the 2011 uprising, but with little street cred or access to funding he didn't stand a chance                  against the conventional power blocks: holdovers from a decadent regime on the one hand, and the grassroots appeal of the Islamists on the other.

Ali now heads the Bread and Freedom Party, eight of whose members were arrested earlier this year on charges including “misusing social media to incite against the state and insulting the president,” according to a Reuters report.

Like all cases of this kind, Khaled Ali’s trial was, as Amnesty puts it, riddled with flaws. “The court issued its decision without hearing the defence lawyers’ final pleadings or allowing them to cross-examine witnesses for the prosecution about disputed video evidence submitted against Khaled Ali, which his defence lawyers argued was fabricated.”

While it is difficult to imagine that Ali would have posed any real threat to Sisi (who has yet to announce his candidacy) in the 2018 elections, the mere symbolism of his existence in the race would have been enough to rattle an administration scrambling to placate masses drowning under increasingly difficult economic conditions resulting from its radical policies.

A recent Bloomberg report stated that Egypt’s urban annual inflation rate accelerated to its "highest level in decades" in July, fuelled by subsidy cuts that are part of an IMF-backed economic reform program. Annual core inflation rose to 35.26 percent with Egyptians across the socio-economic scale feeling the brunt in electricity bills and gas prices, as the flotation of the Egyptian pound led to cutting its value in half relative to the US dollar.

A candidate running on a social justice agenda and fighting government corruption, and who defied the powers that be on their most controversial decision yet, would be a source of anxiety. As Sisi's regime has shown over and over again, it has zero tolerance for dissent, a policy that has led to the most brutal crackdown on opposition across the political spectrum in the past century.

The latest victims, a group of 25 peaceful Nubian activists who sang and beat drums for the right to return to their ancestral land earlier this month, were swiftly beaten and taken into police custody. They now face charges of illegal protest for violating a notorious protest law that was put in place within six months of the 2013 military coup.

Twelve years ago another would-be candidate who had contested what was allegedly Egypt’s first multi-candidate presidential race in 2005 against incumbent Hosni Mubarak, was also slapped with a lawsuit that put him behind bars for five years and practically ended his political life. As soon as Ayman Nour, then leader of Al-Ghad Party, was announced second runner-up at the polls, garnering a mere 7.3 percent of the vote, he was convicted on politically motivated charges of forgery, and imprisoned until 2009 when he was released in a health amnesty. It was said that US President Barack Obama had personally intervened in the decision to release him.

But in the case of socialist Khaled Ali, and considering the current administration in the White House, it’s unlikely that the US will lift a finger in objection to his disqualification. Not only would US President Donald Trump himself be opposed to the very notion of appearing to support a virulent anti-capitalist candidate, he is also clearly a big fan of the "fantastic guy" doing his bidding in Cairo, whether it’s for the benefit of Israel, his allies in Saudi Arabia or to support him in the US's current nuclear standoff with North Korea.

And if anyone was counting on the people’s elected representatives in parliament, that battle was lost long ago. Last August lawmakers belonging to the pro-government majority parliamentary bloc “In Support of Egypt” called for an amendment to Article 140 of the Constitution to extend Sisi’s four-year term by another two years and to lift restrictions on his re-election.

As Mohamed Abul Ghar, the co-founder and former leader of the liberal Social Democratic Party, summed up in an interview he gave to Al-Monitor: "No one will dare run against Sisi for fear of being jailed on trumped-up charges. Moreover, with security agencies now in full control of the media, rival candidates will not be given equal opportunities to disseminate their messages through the various media outlets that are all toeing the state line,” he said. “The current dismal conditions guarantee another landslide victory for Sisi." 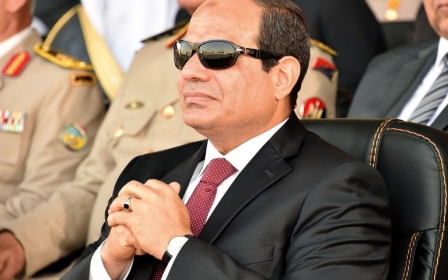