Why Netanyahu really pushed for a Gaza ceasefire

Meron Rapoport
For the continuation of his creeping but secure annexation policy, the Israeli prime minister needs quiet, not war 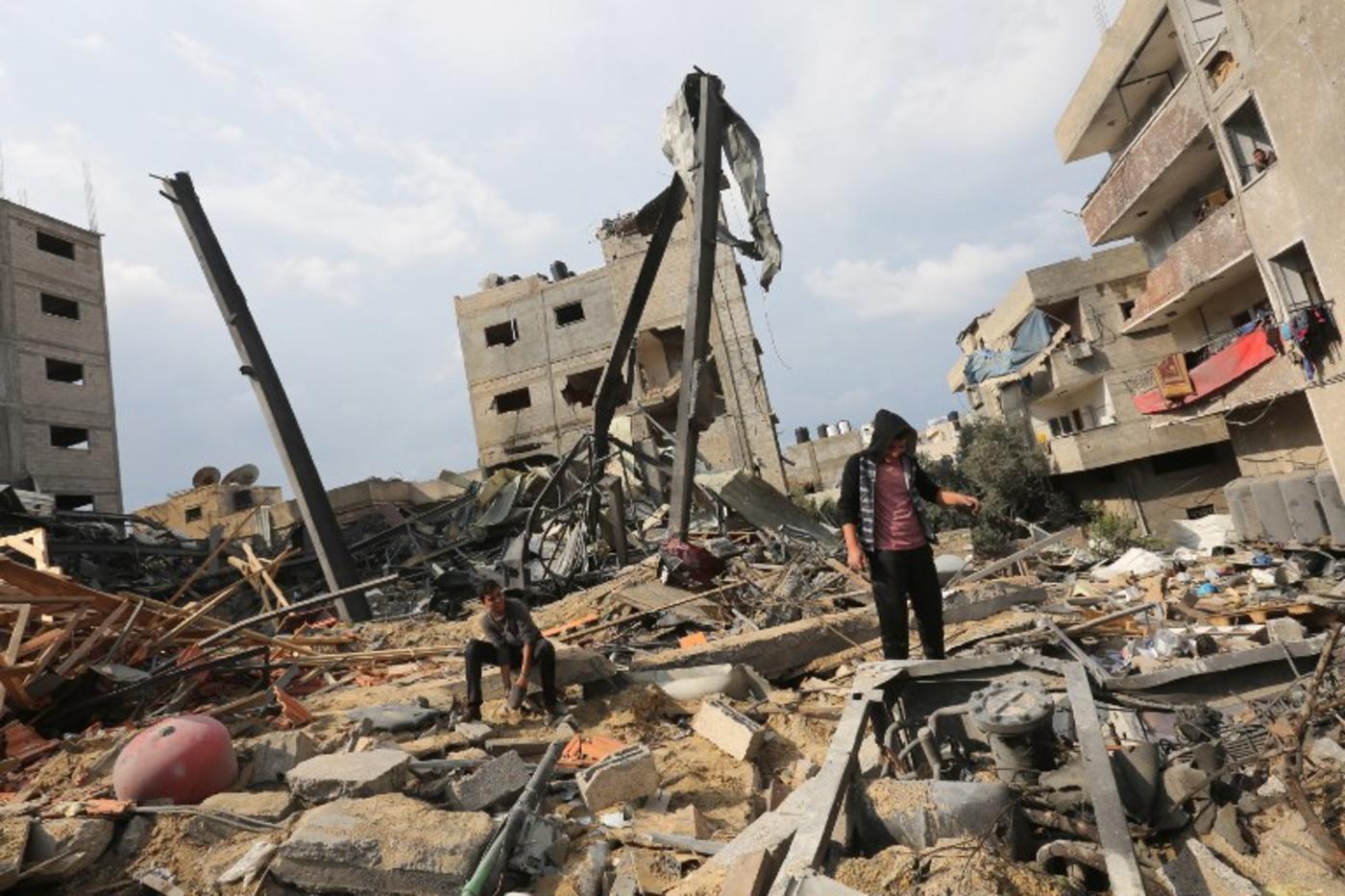 “Surrendering to terrorism” and “gutless” - these were the terms used by Avigdor Lieberman to describe the behaviour of the Israeli government and Prime Minister Benjamin Netanyahu, and to justify his own resignation as defence minister.

One may reasonably assume that Lieberman’s resignation is primarily about political considerations. With elections approaching, he wants to be seen as someone who did not surrender to Hamas. Lieberman, a seasoned political creature, understands that casting Netanyahu as a coward can be exploited for his own purposes.

Since as far back as the 2014 Israeli assault on Gaza, Bennett has been trying to present Netanyahu as an irresolute prime minister who lacks the courage to 'do the right thing', meaning to destroy Hamas

He is not alone. In Sderot on Tuesday, hundreds of demonstrators gathered at the city’s entrance, burning tires and shouting: “Bibi Go Home.” They appeared to have accepted the portrayal of Netanyahu as a cowardly leader. Education Minister Naftali Bennett, likewise, emphasised that the cabinet decision to accept a ceasefire in Gaza was not to his liking.

This is not new. Since as far back as the 2014 Israeli assault on Gaza, Bennett has been trying to present Netanyahu as an irresolute prime minister who lacks the courage to “do the right thing”, meaning to destroy Hamas.

But it was not only on the right that Netanyahu was portrayed as a weak leader. Yesh Atid’s Yair Lapid, Labor’s Avi Gabbay and others competed to criticise Netanyahu’s “gutlessness” in facing Hamas. “Netanyahu is bankrupt and has caved in to Hamas under fire,” former prime minister Ehud Barak said in response to the ceasefire decision.

Every five minutes or so, someone was posting the video to Facebook in which Netanyahu, as head of the opposition in 2009, vowed to “destroy the Hamas regime”, holding this clip as further proof of the gap between his warlike pronouncements and vacillating, cowardly character.

Columnist Gideon Levy has highlighted the positive side of Netanyahu, describing him as a “man of peace” in a recent Haaretz article. It was written a few days prior to the start of the current round of violence, but I would assume that the rapidly adopted ceasefire with Hamas only reinforced his central arguments.

Levy reminds us, and justifiably so, that during his 12 years in office - including his previous stint as prime minister from 1996 to 1999 - Netanyahu launched only one war, compared with the two wars Olmert managed to launch in the three years he was prime minister. Netanyahu, Levy noted, has been “one of the most pacifist prime ministers we’ve ever had”.

However, the critique of Netanyahu’s cowardice on the one hand, and the praise for his moderation on the other, both miss the main point that explains his behaviour. Netanyahu is an ideologue - a “Land of Israel” ideologue. From the moment he first took office in 1996, and certainly since his return to power in 2009, he has been determined to prevent the establishment of an independent Palestinian state between the Jordan River and the Mediterranean Sea.

Netanyahu sees this as a historic mission, handed down to him by his father, who in turn received it from late Zionist leader Ze'ev Jabotinsky. In the Land of Israel, Jewish sovereignty is the only possible sovereignty, to the exclusion of any other. Preventing foreign sovereign rule in the Land of Israel is crucial to the existence of the Jewish people and, indirectly, to all of Western civilisation. The nation-state law is a manifestation of this ideological process.

But Netanyahu is not a fanatic. He acknowledges reality. He understands that the international community will not accept a nullification of the Oslo Accords alongside a dismantling of the Palestinian Authority (PA) and annexation of the West Bank by Israel. Even under Donald Trump, who has done more to encourage this project than any previous US president, international recognition of a process leading to the destruction of Palestinian sovereignty is next to impossible.

Hence, what Netanyahu must do is gain time - on the one hand, to enter into a political process that creates a deep freeze, and on the other, to continue the settlement enterprise and the creation of facts on the ground in the West Bank and East Jerusalem, hoping that in another 10, 20 or 30 years, there will be no other option than a state of Israel with sole and exclusive rule over the historical Land of Israel.

To continue this creeping but secure annexation, Netanyahu needs quiet. Annexation outright makes noise, so he opposes it, even at the price of venomous attacks from Bennett and from leaders within Likud itself. A war makes noise, so he works to diminish war-making, even if it means that a sergeant in the reserves, like Lieberman, will portray him as gutless.

Netanyahu’s attitude towards Hamas must be viewed in that context. Netanyahu nearly always retreats from an all-out war of annihilation against Hamas rule in Gaza - but not because he flinches at the prospect of violence or a show of power. On the contrary - in his view, a show of power is more important than principles.

“Other nations respect principles to a certain extent, but they respect power much more,” he said only a few days ago at a Likud faction meeting. But Netanyahu does not want noise.

Soldiers dying in Gaza is noise, thousands of Palestinian civilians dying is noise, occupation of the Gaza Strip is an earthquake that would draw the whole world’s attention to the Palestinian situation, to the occupation, to the fact that negotiations are frozen. That is the last thing Netanyahu wants.

But there is another matter here, something deeper. Netanyahu “inherited” the rift between Hamas and Fatah, between the West Bank and Gaza, when he resumed the prime minister’s job in 2009. In his view, this rift is a major political asset.

Since the early 1990s, Israel has aspired to cut Gaza off from the West Bank by withholding exit permits and imposing closures, and then through its siege on the Gaza Strip. The thinking was that as long as the two parts of the Palestinian body politic are separated from one another, the ability of the Palestine Liberation Organisation, and Palestinians in general, to demand a state diminishes.

The fact that today there are two separate governments operating in Gaza and the West Bank is a political goldmine for anyone wishing to derail any process that would lead to an independent Palestinian state. And Netanyahu, as we have seen, is precisely that man.

Thus, from Netanyahu’s standpoint, preserving Hamas rule in Gaza is a strategic asset of the first order. In his view, any process that is likely to lead to the establishment of an independent state in Gaza, separate from the West Bank, is a blessing. If Gaza becomes its own “emirate", as right-wing people like to say, it would be a death blow to the pretensions of Mahmoud Abbas, or any potential heir, to represent the Palestinian people in negotiations to end the occupation and establish an independent state.

This thinking explains Netanyahu’s sudden concern for the “rehabilitation” of Gaza - and also points to the reason he agreed to the entry, with cameras rolling, of suitcases stuffed with $15m sent by Qatar, intended solely to pay Hamas employees in Gaza.

In the latest round of violence, Hamas proved again that it could quite easily bring daily life to a standstill in broad areas of Israel

It also explains why Netanyahu again drew back from an occupation of Gaza. If such a military step were somehow to succeed without costing the lives of hundreds of Israelis and thousands or perhaps tens of thousands of Palestinians - and without becoming an international media catastrophe - Israel would ultimately find itself handing Gaza over to Abbas and the PA, thereby strengthening their political standing in the world. This is precisely what Netanyahu is trying to prevent.

That is not to say that Hamas is a creature of Netanyahu or of Israel, as Fatah people are wont to say in every private, and occasionally public, conversation. Hamas is a thorn in Israel’s side.

In the latest round of violence, Hamas proved again that it could quite easily bring daily life to a standstill in broad areas of Israel. The impression given is that its military capabilities are only improving, and that in the future, it will be even more dangerous - perhaps not like Hezbollah, but not far from that level.

Netanyahu, however, is in a bind. On the one hand, for all the reasons discussed above, it is very important to him to keep Hamas in power in Gaza. On the other hand, so long as Hamas rules Gaza, Netanyahu won’t be able to impart a sense of security to hundreds of thousands of Israelis in the country’s south. And yet, because he is opposed in principle to any political negotiations with Palestinians, Netanyahu has no path to a long-term agreement that would calm the situation. He has no choice but to agree to terms with Hamas.

Hamas understands Netanyahu’s dilemma well. The Palestinian faction knows that Netanyahu knows he will not attempt to wipe them out. Thus, Hamas could launch hundreds of rockets at Israel under the current circumstances, knowing that in the end, Netanyahu would agree to a ceasefire as soon as Hamas, via Egyptian mediation, offered him one. Hamas exploited this catch-22 to achieve a clear political victory in the latest round of violence, and in so doing, exposed Netanyahu’s weakness.

Netanyahu might be aware of this catch-22, but given what he views as his historic mission to prevent the establishment of an independent Palestinian state, he is prepared to pay the political price for what the public may see as gutlessness or cowardice. The political price this time around has been particularly high.

It’s reasonable to assume that Lieberman’s resignation will prompt new elections and an end to Netanyahu’s fourth administration, which, until not long ago, seemed so stable. It would certainly be ironic if it were Hamas, which Netanyahu has worked so hard to keep alive and to defend from threats from Abbas, that finally leads to the end of Netanyahu’s reign.

Photo: A Palestinian stands amid the rubble of a Hamas-run television station, destroyed by an Israeli airstrike, in Gaza on 14 November 2018 (AFP)