From militants to student activists: The women who fought for Algeria

Throughout history, Algerian women have fought injustice at work, in the home and on the battlefields, yet their contributions are relatively uncelebrated 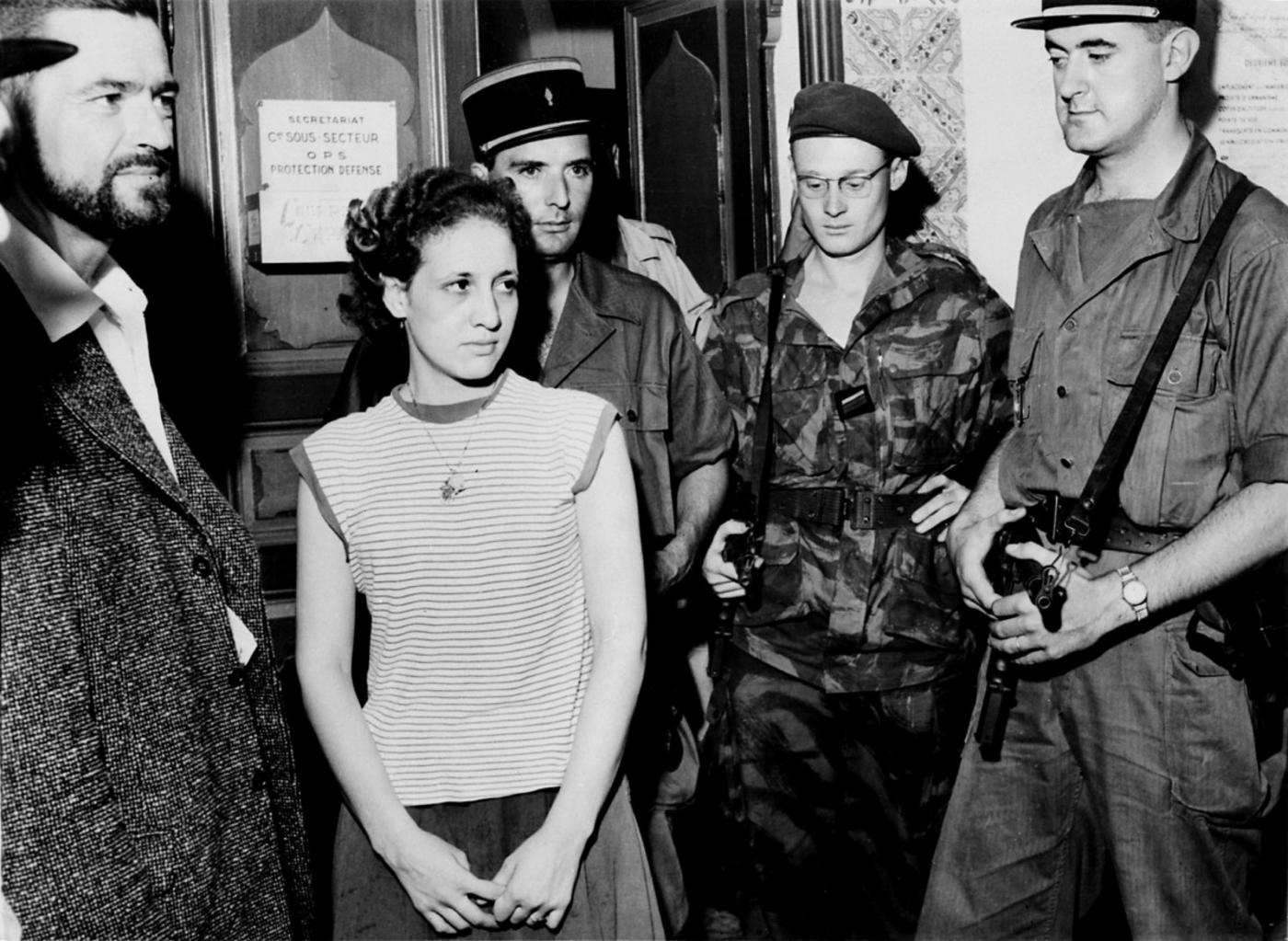 Zohra Drif was one of thousands of women who were active agents during the independence war, many of them imprisoned and tortured by the French (AFP)
By
Ouissal Harize

Throughout Algeria’s history under French colonialism, women played a vital role in the quest for self-determination, as well as in protecting and developing the country’s culture and traditions.

This was particularly apparent during the War of Independence (1954-1962), when Algerians fought to free the North African country from 132 years of French rule in a battle that would come to represent the epitome of fierce revolutionary resistance.

Driven by the resolve to liberate Algeria at all costs, women took to combat in an expansive range of roles including as paramilitary fighters, transporters, fundraisers, nurses, cooks and communicators.

One of the many tactics often adopted by female agents during the war was to act as communicators between the Algerian soldiers and the population as a whole, in order to raise funds and propagate news about the revolution. Ironically, by taking part in such high-risk operations, Algerian women strategically subverted the colonial stereotype of the tepid and submissive native woman afforded to them by the unsuspecting French army.

On 5 July 1962, the revolution ended in liberation for Algeria. But while one battle ended, others would soon begin for the country’s female population.

Algerian women would continue to actively engage in national politics in the years following independence, fighting patriarchy, misogyny and political alienation by ex-fellow combatants who were dismissive of their seat at the governing table of the new state.

Despite the many obstacles Algerian women have faced, they have remained socially and politically active. This can be seen by the return of women to the political forefront at the launch of the popular movement, known as Hirak, as well as the Revolution of Smiles.

The protests were triggered by former-president Abdelaziz Bouteflika’s announcement on 10 February 2019 that he would seek a fifth term in office. The Hirak succeeded in ousting Bouteflika, but the struggle to bring the structure of the entire regime down continues.

Despite their enormous historical contributions, Algeria’s iconic women remain somehow uncelebrated outside of the Grand Maghreb and the Arab world.

Born into a family of religious marabouts in 1830 (during the fall of Algeria to French colonisation) in a town called Soumer in the Kabylie region, Lalla Fadhma N’Soumer is renowned as an icon of female armed militancy and an Islamic religious authority of her time.

Known for her intellect and ferocity, she led the first wave of resistance (1850-1857) against the French after the death of Cherif Boubaghla in a battle on 26 December 1854.

While her enemies called her the Joan of Arc of the Djurdjura mountains for her military campaigns, she was also referred to as “lalla” or “lady” to signify her honour and sanctity.

In her article about Lalla N’Soumer, author Samia Touati recounts that on the day she was captured by the French army, Marshal Jacques Louis Cesar Alexandre Randon (1795- 1871) asked Lalla N’Soumer why her men violently resisted the French troops.

She replied: “God wanted it. It is neither your fault, nor mine. Your soldiers went out of their ranks to penetrate my village. Mine defended themselves. I’m now your captive. I have no reproach to you. You shouldn’t have any reproach to me. It was written this way!”

Born Yamina Echaib in 1911 to an educated family in Hadjout, Zoulikha’s commitment to freedom fighting began as a mediator between the National Liberation Front (FLN) and the Algerian population.

A nationalist party formed in 1954 and which went on to rule Algeria after independence, the FLN initially resisted French colonialism through paramilitary guerrilla warfare.

The secrecy of Algerian independence operations warranted the need for mediators such as Oudai to contact Algerian families individually and confidentially to raise funds for the FLN.

In October 1957, the French army arrested Oudai and tortured her for ten days.

After refusing to divulge secret information, French soldiers pushed her from a helicopter, earning her the title of “mother of martyrs”.

Algerian writer Assia Djebar evokes the figure of Zoulikha Oudai in her 1977 film, La nouba des femmes du Mont Chenoua (The Nouba of the Women of Mount Chenoua) and her 2002 novel, La femme sans sepulture (The Woman Without a Tomb).

Born in 1935 in the historic neighbourhood of Al-Casbah in Algiers, militant Djamila Bouhired showed signs of political leadership in the early years of her childhood. As a pupil in a French school, Bouhired once rebelliously sang “Algeria is our mother” instead of “France is our mother.”

At the age of 20, Bouhired enthusiastically joined the FLN and later on the Fedayeen (armed militants) to take part in guerrilla warfare against the French colonists.

After she was arrested in 1957, Bouhired was tortured by being beaten, burnt and electrocuted at the Rheims prison where she was incarcerated.

She was honoured by key personalities in the region: Nasser once received her in Egypt, Qabbani wrote a poem about her, the Lebanese musician Fairuz dedicated a song to her, and Chahine directed the 1958 film, Jamila, the Algerian, about her life. Bouhired was also featured in the 1966 Italian-Algerian production, The Battle of Algiers.

But after independence she was deliberately alienated from the political scene by fellow male FLN combatants. Bouhired decided to fight yet another battle against Bouteflika’s election when she marched alongside young student activists last year.

Exasperated by the injustice of patriarchy, Bouhired asserted women’s role in liberating Algeria by announcing during protests last year: “Our blood is the same as men’s. Our blood is not water. Our blood is blood."

Born in 1936, militant and author Louisette Ighilahriz devoted her youth to helping the Algerian revolution by working as a courier to transport the FLN’s documents and weapons.

Ighlahriz documented her incarceration and torment at the hands of the French army in her autobiography, Algerienne. This account not only testifies to women’s active engagement during the Algerian war, but it also highlights the widespread use of torture committed by the French, which was finally acknowledged in 2018.

It was decades before Ighilahriz was finally ready to speak about the horrors she faced. In her book she gives a painful account of the dehumanising treatment, the beating and rape at the hands of French army captain Jean Graziani, while in prison.

In addition to the physical torment, Ighilahriz was forced to live in her own excrement: “My urine leaked through the sheet covering the bed, my excrement mixed with my menstrual blood and formed a stinking crust” which pushed her to the edge of insanity.

This account of torture is similar to other narratives on the experiences of other activists, including the biography, Pour Djamila Bouhired, by Jacques Verges (1957) La question by Henri Alleg (1961) and Djamila Boupacha (1962) by Gisele Halimi. Ighilahriz was, however, the first Algerian woman to speak out about rape in a personal autobiography.

Today, the 83-year-old remains active, talking about the betrayal of the revolution by its own militants after independence and participating in today's revolution.

Born into an upper-class family in 1934, it was retired lawyer and politician Zohra Drif’s education that led her to develop staunch feminist and anti-colonial positions that propelled her active engagement with the FLN. 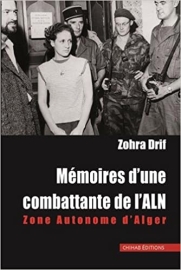 In her memoir, Inside the Battle of Algiers, Drif recounts the joys of having access to information on resistance while at university:

“We finally had access to the publications of the many parties and associations comprising our national movement: the UDMA’s La Republique Algerienne, the PPA-MTLD’s L’Algerie Libre; and El Bassair, published by the oulema. The press brought us information, opinion pieces, and analyses from various perspectives, while lectures by the very individuals engaged in the early struggle gave us the means to separate the wheat from the chaff.”

After independence, Drif continued her political engagement both as a lawyer and as a member of the Algerian Council of the Nation. Her autobiography Memoirs of a combattant of the ALN: Autonomous zone of Algiers is a testimony of her struggle during the Algerian revolution. Her feminist activism continued after independence as a critic of some of the government’s policies.

When a new Islamic family code was proposed in 1981 that would ultimately limit women’s rights within the household, Drif joined fellow feminists as they swarmed the streets of Algiers calling it “the infamy code”.

Drif also joined the masses that marched against former president Abdelaziz Bouteflika’s bid for a fifth term in Algeria last year, calling for the president’s resignation and opposing having a military state.

A founding member of the group Women in Europe and the Maghreb and president of the Association for the Advancement of Women, in Algiers, Salima Ghezali is known for her active role in fighting against fundamentalism during the 1990s civil war in Algeria.

The rise of Islamist patriarchy in Algeria was demarcated, on the political scene, by the proposition of a new family code in 1981 which designated the male patriarch as the head of each family, thus giving him authority over women.

Working as the editor of Algerian French-language weekly La Nation put Ghezali’s life in great danger because of her unyielding political opposition to the government of ex-president Chadli Bendjedid and the Islamist party (FIS). Her dissent against censorship infuriated both the Islamists and government officials.

Ghezali’s bravery as a journalist and a feminist was acknowledged worldwide; she received accolades from the World Press Review and the European parliament.

Today's revolution is built on the back of the struggles of the past. The young students Nour El houda Dahmani and Nour El houda Oggadi are two women who joined the anti-corruption marches last year to demand long-overdue democratic reforms and a political system representative of its young population.

Law student and activist Nour El Houda Dahmani, 22, was arrested in September 2019 while marching in the Hirak student-led protests against the militarily imposed presidential elections.

Dhamani, who was holding a poster at the time of her arrest, reading: “All of the corrupt shall be held accountable", soon became one of the many iconic faces of the Revolution of Smiles.

Although Dahmani stated that she was not mistreated in prison, the experience of incarceration was traumatic. She was supported by vast numbers of people, as she explained in an interview with Berbere Television: “When I read the articles written about me, and I heard that people marching in the Hirak were asking for my release, even my incarceration did not seem cruelly bad anymore."

Upon her release, Dhamani only had one goal: to return to university despite missing an entire term.

Like Dhamani, Nour El houda Oggadi is a student and activist who was arrested a couple of months later, on 19 December. She was charged with “demoralising the army” because of her social media posts and signs she carried while marching, which were part of demands calling for Algeria to function as a civilian, not a military state. Oggadi served 45 days in prison.

Prison did not deter Oggadi; after her release, she stated her pride in her role in this Hirak, which she describes as “the birth of a new generation."

The two students became powerful symbols of female resistance in Algeria, just two in a long line of women fighting tyranny and injustice. 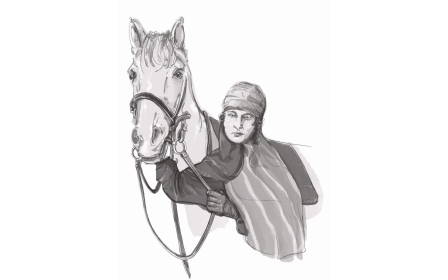 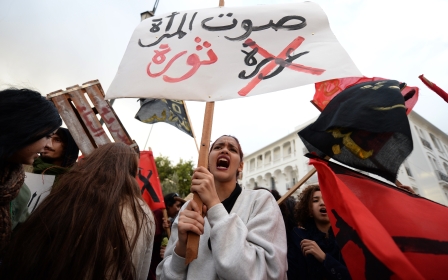 Women
In pictures: The women driving protests across the Arab world 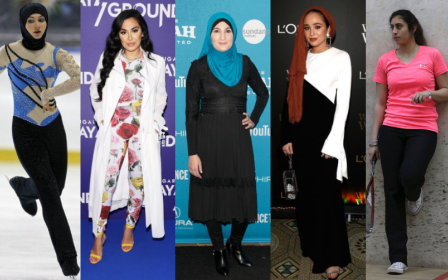