Yemeni merchants arrived in the country in the 19th century and are now an integral part of society, living in harmony with Ethiopians 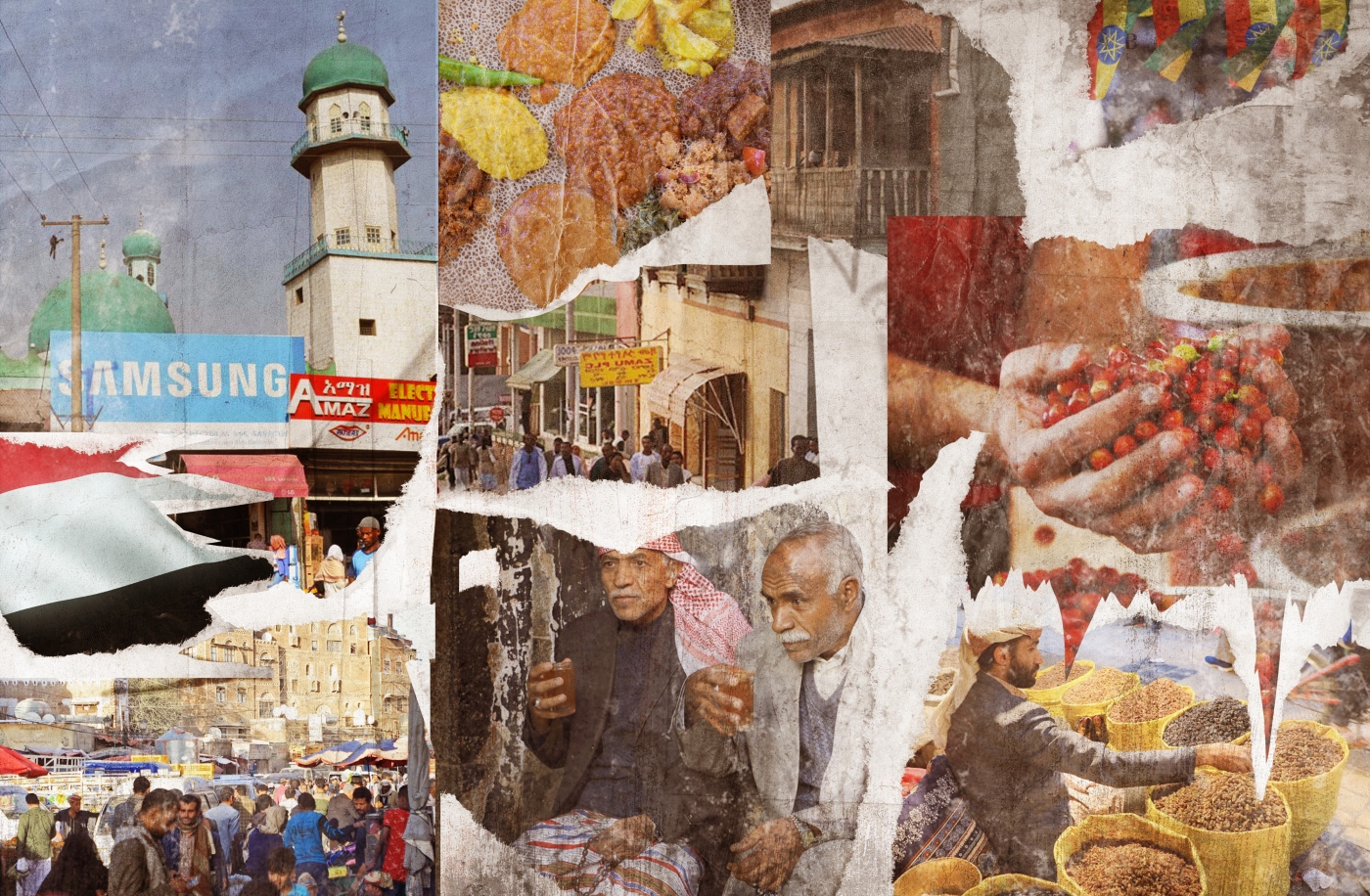 Sonia Khaled, 55, leans across the balcony of her villa in Legetafo. On a good day, it's a 25-minute drive from Ethiopia's capital Addis Ababa, but the city's growing traffic problem means it can take up to an hour and a half.

Khaled sips her coffee. It’s sweet and her first of the day.

The beans are Yemeni of course, she smiles. It's a point of contention in Addis Ababa, as Ethiopians say their country is the birthplace of coffee, while Yemenis claim it as their own.

Khaled is a mother of four and her family have been living in Ethiopia for decades, after her grandfather arrived from the Yemeni port city of Aden in 1947.

Raised in Addis, as it’s called by the locals, Khaled returned to Yemen for a time before marrying her husband when she was 28. After a spell in the United States, the couple have been living back in the Ethiopian capital for 27 years.

They are just one of many Yemeni families who have made Addis Ababa their home, and the influence of the cuisine and culture of Yemen can be felt across the city.

The arrival of the Yemenis

With a rich intertwined history and trade and travel always flowing between the two, it’s hard to pinpoint the arrival of Yemenis in Addis, especially when paperwork and regulations weren’t as stringent.

The first documented account of Yemeni arrivals was of Shaykh Said Ahmad Bu Zara from Hadramout (which at the time fell neither under the British nor the Sultanate’s rule) claiming he’d been in Addis since 1903.

Just before his death in 1913, Emperor Menelik II issued a decree ordering non-Ethiopians to register their country of origin on arrival.

Yemen was divided at the time between the British in the south and the Sultanate of Qu’aiti and Kathiri in the north, so traders from the region would declare themselves as either British or Qu’aiti, writes anthropologist and academic Samson Bezabeh.

Although figures remain scarce and inaccurate, Bezabeh says there were around 800 registered British Yemenis by 1920.

Khaled’s own grandfather, Abdullah Abdulrahman, travelled from Aden with his British passport and settled in Dire Dawa, a city in eastern Ethiopia, where many Yemenis started their Ethiopian life.

Abdulrahman was a merchant at the time, importing carpets and rugs from Belgium and jewellery and beads from Germany. “Today, we’d call it import-export,” Khaled explains.

There were thousands arriving then and it was an easy journey by boat, says Khaled. The traders brought with them spices and silks from India, and hides from Yemen. The Yemeni community quickly began to flourish, some became shopkeepers, sweet sellers, launderers and butchers.

Those that ventured further, into the capital, settled in the Arada neighbourhood of Addis and would pray in one another's homes before the first mosque, Masjid Anwar, was built in 1922 in nearby Mercato. There are now 140 mosques spread across the city.

Today, Yemenis in Ethiopia are well accustomed to the country’s cuisine. In the early days, it was common for merchants to prepare traditional Yemeni meals using spices brought with them.

They’d cook mandi – rice and meat slow-baked in a pit and flavoured with coriander, paprika, and cinnamon – sanuna, a rich meat and okra stew, and mutaffayah, a tomato based spiced fish dish that’s best prepared with tuna but became substituted with local Nile perch.

The men would also happily eat traditional Ethiopian meals like the distinctive, slightly sour and spongy injera bread, made from teff flour, served with a wide array of dishes.

“Years ago, before Biblical times, the land was one”, Khaled tells Middle East Eye. “The powerful Aksumite kingdom once ruled over what is now modern-day Yemen and Ethiopia.”

“So, trade and social exchanges date back to even before Christianity. And like our claims over coffee, which is always done in a playful way, it's the same case with Saba [Queen of Sheba], we both say she belongs to us. We’re interlinked, we always have been,” says Khaled.

Today the country has a Muslim prime minister, Abiy Ahmed, whose wife is Christian. Islam is the second largest religion after Orthodox Christianity, with around 36 million Muslims, mainly in the capital and in Harar in the east.

Yemeni Quarter in the city

When the Italians briefly tried to reoccupy the country in 1936 (they stayed for five years), they divided Addis Ababa, forcing Ethiopians, Yemenis and anyone they deemed as "native" or non-white into the Mercato area. 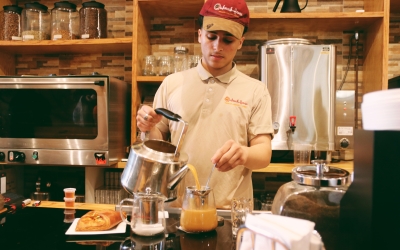 Qahwah House: A Yemeni cafe bringing New Yorkers together, one sip at a time
Read More »

The Italians encouraged Yemeni migration to Ethiopia, by offering jobs on their construction projects, building roads and a railway line from Djibouti, which later became the main point of entry for Yemeni travellers.

Yemenis arriving at this time became rich through construction, and many went on to become successful businessmen and even government officials.

When the Italians were pushed out in 1941 with the help of British forces, Mercato became the city’s main Yemeni quarter, with its own school and mosque, which still exist.

“Traditionally Mercato was known as a Yemeni area”, says Saeed Al Ajdel, a civil engineer by profession, “but as the Yemeni community became more established and mobilised it spilled into different areas of the city.”

By the end of the 60s, Yemenis and other Arabs were expelled from the country after the Syrian Front for Liberation of Eritrea were implicated for planting a bomb on an Ethiopian Airlines flight.

“The Yemenis left entrusting their shops and livelihood mainly to those from the Argoba community. Argoba are a mix of Yemeni and Ethiopian descent,” says Al Ajdel.

But by the 70s some of those who had left had started to return to their shops and businesses and continued work. Today, Yemenis are integrated into the very fabric of Ethiopian society and there remains no single Yemeni Quarter.

Khaled says there’s never been any tension between Yemenis and Ethiopians.

“We feel at home here, and Ethiopians feel like we are one of them. There are thousands of Ethiopians in Yemen too, we have friendly relations which I think go back to our shared history.”

Yemeni migrants arriving most recently to Ethiopia following Yemen’s civil war, already have family connections, a shared lineage. The Ethiopian government has supported Yemeni migration, as it had done in the past, by granting prima facie refugee status to Yemeni asylum-seekers.

Thanks to early Yemeni migration and integration, the extensive, established shops and services dotted around the city are no longer limited to a neighbourhood.

“We feel at home here, and Ethiopians feel like we are one of them"

Eateries like Nakhla, Al-Jerief and most recently the Yemen Kings chain owned by a Yemeni-Ethiopian family, offer hot bowls of fahsa, a stew made out of beef or lamb, and spicy salta (a highland soup) to Yemen’s latest arrivals.

The Yemeni community has continued to flourish in recent years, with many young people learning to speak their native Yemeni dialect of Arabic as well as Amharic, Ethiopia's national language.

However, for the Yemenis in Addis Ababa, holding tight to their roots is still essential.

“I make a point of speaking Arabic at home with our four children, and with my husband and family, it’s important for them, for us not to forget it,” says Khaled. 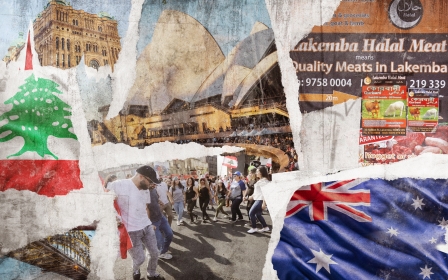 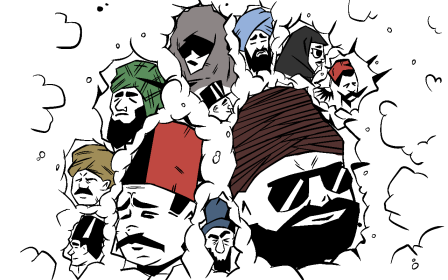 Arts
The surprising link between Japan's manga and Islam 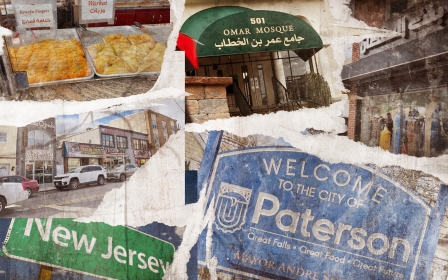 Culture
Inside the diverse Arab community of New Jersey