Yallah, brudi: How Arabic and Turkish took over German hip-hop 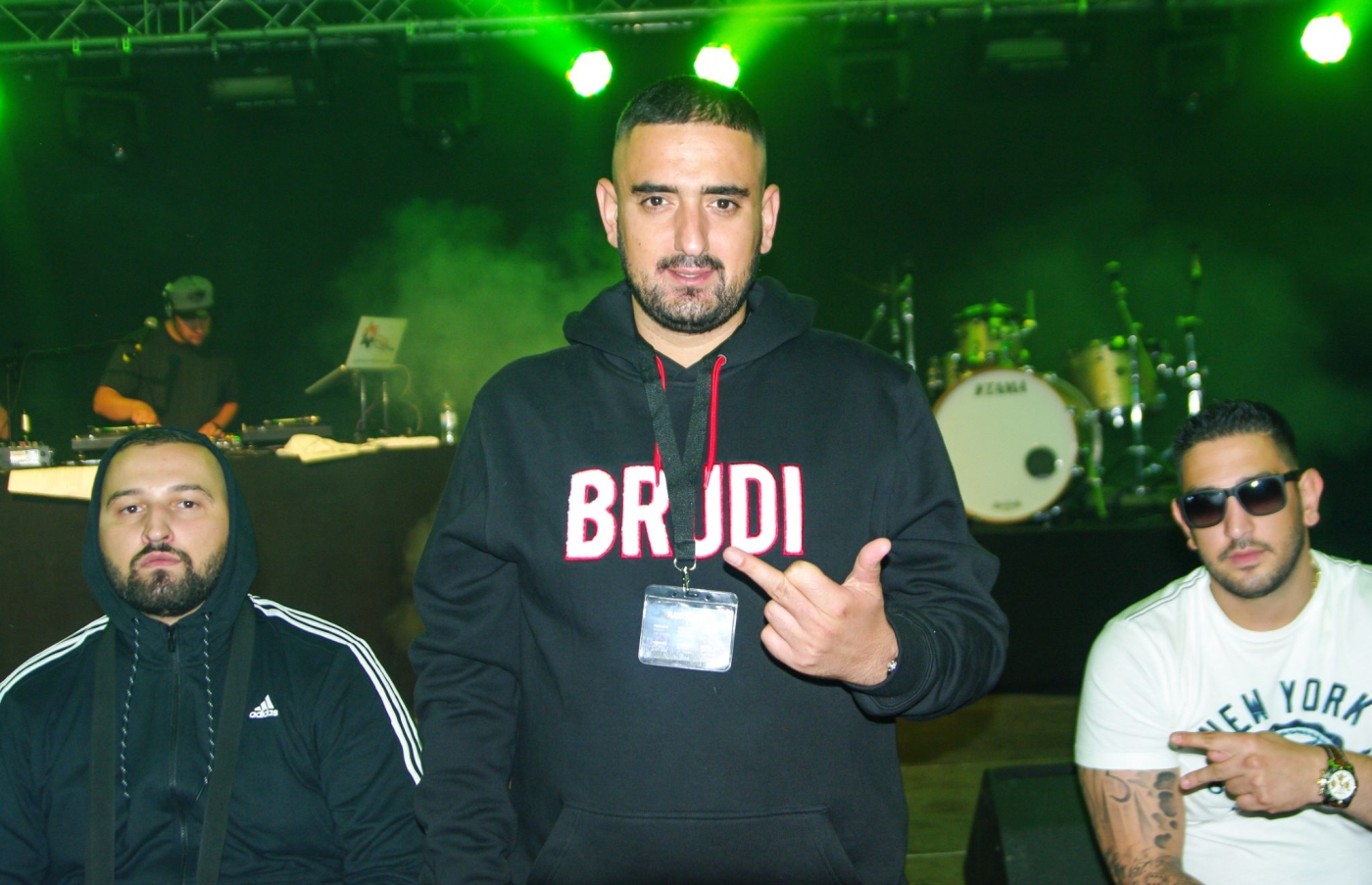 Haftbefehl is a German rapper who peppers his music with Turkish, Kurdish and Arabic words (WikiCommons)
By
Matt Unicomb

Eighty seconds into Veteranos, a hip-hop track by the German rappers Celo & Abdi, the melody drops out, leaving nothing but bass and percussion. Suddenly, Brudi030, a guest artist who raps the track’s second verse, slips into Arabic:

Big problem, because of a few grams of green

You sheep, don’t be a macho man

This blend of German and other languages, usually Arabic and Turkish, has come to define Germany's thriving hip-hop scene, a corner of mainstream culture unimaginable without the children and grandchildren of migrants from Turkey and the Arab world.

Three decades after Californian group Cypress Hill had teenagers in Ohio using Latino street slang like loco and ese between high school classes, German rappers like Gringo and Haftbefehl have youngsters in Bielefeld shouting wallah and mashallah as they fist bump on city streets.

Snippets of languages once reserved for private conversations with family are broadcast to millions of hip-hop fans through immensely popular tracks, as rappers who grew up speaking German as a second language shape the language of the country’s youth.

“German is the frame that holds everything together,” explained Murat Gungor, a writer and former rapper based in Frankfurt. “But if you only grew up monolingual, there are many rap lyrics you simply won’t understand.”

Together with his writing partner Hannes Loh, you could describe Gungor as a hip-hop historian. The pair have covered  the relationship between hip-hop, identity and integration in a number of books and essays published in German.

Both authors were rappers in the foundational years of German rap and have tracked the scene’s development from the late 80s to today.

"Most of the people who built German hip-hop in its early stages had at least one parent who wasn’t born in Germany," Loh told Middle East Eye. "From the beginning, hip-hop was full of different diasporas."

From mono to multilingual

During the 90s, Germany was home to a number of renowned groups who exclusively rapped in Turkish. One of the best known was Islamic Force, a four-piece outfit that combined classic hip-hop beats with Turkish-style melodies.

Like many rappers at the time, Islamic Force began their career in the late 80s rapping in English, but eventually switched to Turkish, in turn drawing a huge fanbase in Turkey. Their following in Germany was significant but smaller.

"But these groups felt they didn’t have success," says Gungor, who once rapped in Turkish as part of a duo called DJ Mahmut & Murat G. "They weren’t taken seriously or played on the radio."

That had changed by the early 2000s, when rappers representing a new wave of gritty underground labels rose to national prominence. This marked the emergence of so-called strassenrap, or street rap, where lyricists from a range of linguistic backgrounds injected their own slang into songs that reached millions of fans.

One label in particular, Aggro Berlin, turned little-known rappers like Sido and Bushido into superstars who, two decades later, are among Germany's most famous musicians. Active between 2001 and 2009, many credit Aggro Berlin with shaping the sound of modern German rap.

"Labels like Aggro Berlin spilled into the mainstream with a new characteristic: a mix of languages," Gungor says. "They weren’t monolingual rappers, but with a mix that reflected how people spoke on the street."

Until then, the 90s scene had been dominated by mainstream groups like Die Fantastischen Vier, who once told MTV they proudly represented Germany’s middle class. Their lyrical content was lighthearted, mostly revolving around themes like parties and romance.

Parallel to Die Fantastischen Vier, but less known, was Advanced Chemistry, a 90s group featuring the German-Haitian rapper Torch, who rapped about identity and belonging; topics that would become more prevalent as the 21st century grew older.

Some of Berlin’s emerging street rappers found inspiration in neighbouring France, where MCs, especially those with roots in North Africa, were shaping a new style of youth slang.

"Specter, the founder of Aggro Berlin, grew up in Paris," Loh says. "He saw the French style of street rap, which he brought with him to Berlin."

Within a few years, when German street rap had gone mainstream. Its mix of languages became one of the genre’s quintessential traits.

German hip-hop, often dubbed Deutschrap, would not exist in its current form without Germany’s Arab and Turkish diaspora, communities that began with the arrival of migrant workers in the late 60s.

Many of the scene’s most famous MCs are direct descendants of this controversially named "guest worker" generation, which recently celebrated its 60th anniversary.

In October 1961, Germany and Turkey signed an employment agreement that eventually brought 867,000 Turks to what was then West Germany, contributing to a diaspora of around three million residents of Turkish descent today. Agreements with Morocco and Tunisia, along with other countries like Italy and Spain, also existed.

The treaty came as a result of a labour shortage in Germany following World War II, and although the agreement was originally designed to limit the workers' stay to two years, that was soon scrapped, as it became time consuming and expensive to bring new workers in and train them.

Since then, the number of Turkish people in Germany has only grown, particularly as a result of family reunification and waves of political exiles making it their new home. Their presence is felt throughout modern Germany. The Turkish doner kebab, developed in Berlin in the 70s, rivals currywurst as Germany’s favourite street food.

In addition to rap, where they are particularly prominent, Germany’s Turkish diaspora includes hugely popular names across sports, arts and politics, from authors and journalists like Souad Mekhennet and Fatma Aydemir to superstar footballers like Ilkay Gundogan and Mesut Ozil.

The founders of BioNTech, Ugur Sahin and Ozlem Tureci, are the children of Turkish migrants and developed the world’s first Covid-19 vaccine. And as of December 2021, the Greens politician Cem Ozdemir is the first German federal cabinet minister of Turkish descent.

Researchers say it’s difficult to estimate the exact number of Turkish speakers in Germany. Many Turkish-German families speak German at home, or may speak a minority language in Turkey. Even so, Turkish is most likely Germany’s most-spoken minority language.

There are also more than a million German residents of Arab descent, including several hugely popular rappers. Arabic words feature in many of their tracks, even leading to what the Berlin rapper Mudi has dubbed “Arabesque rap”.

One of his most popular tracks is titled Warde, the Arabic word for rose, which has been streamed across Spotify and YouTube over 24 million times.

But this appreciation for languages like Arabic and Turkish has not crossed over into the rest of society, where foreign languages like English, French and Italian are considered more prestigious.

“Not all foreign languages are valued the same,” wrote the Turkish-German author Kubra Gumusay in her 2020 book Language and Being. “If a German child knows second and third languages like Romanian, Polish, Turkish, Arabic… are they equally considered to be a sign of outstanding ability?”

German hip-hop is a bold exception to this sentiment, as rappers proudly introduce words once reserved for their own communities to millions of listeners.

"We have these languages injected into the cultural mainstream through rap, but they haven’t been connected to, for example, education," rap author Gungor says. "Arabic and Turkish are great languages, and could be more widely taught. But they’re not."

Rappers have themselves become informal language teachers, acknowledging the sway they have over youth culture in a handful of songs that directly influence this phenomenon. Some online interviews specifically quiz rappers on their slang.

“I’ll explain the jargon for Franz and Hans,” proclaimed the Moroccan-German rapper Abdi in the track Hinterhofjargon (Backyard Jargon).

"Arwena" means party till it pops off

There are more examples. “We’ve developed our own language,” explains the Cologne rapper Eko Fresh in Strassendeutsch / Turkenslang (Street rap / Turkish slang), a 2011 track that teaches listeners some of his favourite words.

"For Germans we’re Turkish, for Turks we’re Germans," raps Eko Fresh in Strassendeutsch / Turkenslang. In the 90s, Advanced Chemistry explored the same theme on their best-known track, Stranger In My Own Land.

In addition to the languages themselves, hip-hop tracks have provided an uncensored window into the lives of Germany’s Arab and Turkish diaspora long before themes like integration and anti-racism entered mainstream German discourse.

German tracks stretching back to the 90s are peppered with terms like auslander (foreigner) or immigranten (immigrants), reflecting Germany’s social landscape, where discrimination is coded into the language.

Germans of Turkish, Arab or African descent are commonly referred to as auslander, or the more subtle “person with migration background”, even generations after their families came to Germany.

"My mother was born here," the Hamburg rapper Nate57 said in a 2013 interview. "Plenty of ‘foreigners’ are in their third generation, [and are] well-integrated German citizens. And they are still told to go back home. How can that be?"

That’s no longer the case, but being a German rapper now means dropping a Yallah (come on) every now and then.

"I recently showed some rap videos from the 90s to some school kids I teach," Gungor says, referring to rap clips with white, German MCs. "Music videos from friends, for example. The kids were completely shocked. In their world, there are only rappers with migrant roots." 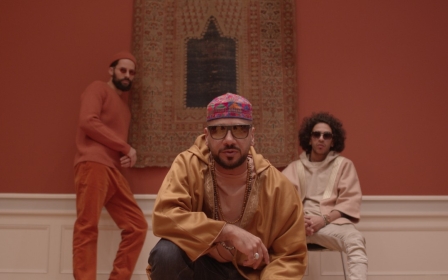 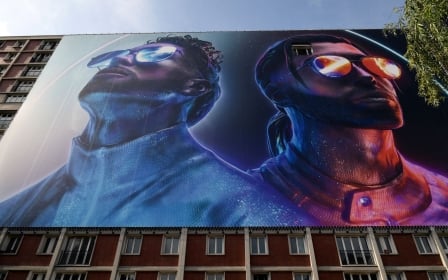 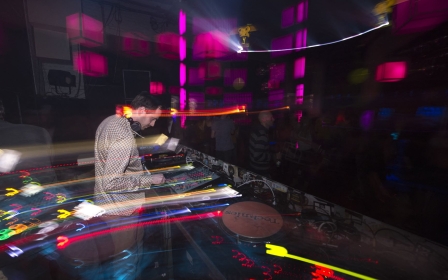 Music
In Berlin, the DJs for Palestine movement is growing