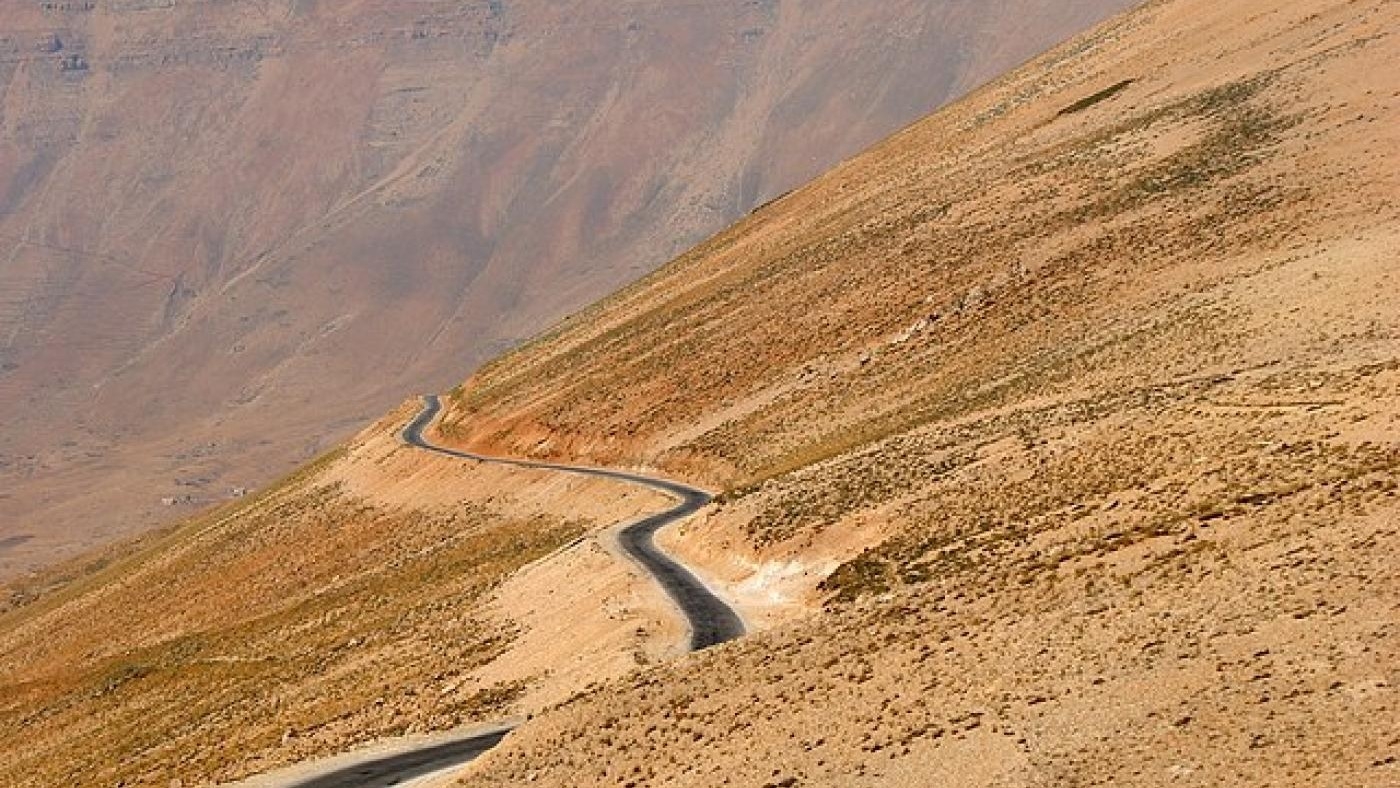 The road trip has long been a staple of the coming-of-age story and has featured in some of the Middle East and North Africa's most famous travelogues.

The North African writer and jurist Ibn Battuta spent three decades going wherever his curiosity led him, while travellers like Ibn Fadlan provided crucial historic details about medieval peoples, such as the Rus north of the Black Sea.

Those travellers, and others, used archaic roads or caravans to traverse large distances and were pitted against dangers, such as the weather or armed robbers. Today, things are much easier, but that does not mean the risks have totally disappeared or new ones have not surfaced.

Winding, mountainous roads can be nerve-racking for even the most experienced traveller, while the possibility of breaking down in the middle of the desert can be a death sentence.

Here, Middle East Eye takes a look at five of the most treacherous roads in the region.

Route 704 in the Moroccan Atlas Mountains is a road that even those wanting to play it safe are unable to avoid.

The route is the only way through the famed Dades gorge, which attracts tourists from all over the world. The road is known for its zigzag turns, which seem almost endless, and goes up to 2,910 metres above sea level in mountainous terrain, requiring the utmost concentration and precision from drivers.

An inattentive eye risks plunging a vehicle into deep gorges flanking the road, a risk especially palpable given the lack of barriers on the roadsides.

Those risks matter little to daredevils among the locals, of course, who use the mountain road as a race track, racing each other with tourists in tow as they drop off passengers to hotels.

For those brave enough to attempt it, Route 704 provides travellers with views of stunning mountainous landscapes.

This Lebanese route winds around the Barouk mountain, which stands at around 1,943 metres above sea level. Positioned close to the Syrian border, the Maaser-Joub Jannine Road is an alternative to the busy Beirut to Damascus highway.

Travellers are greeted with spectacular views of the region in the winter, with snow blanketing the nearby peaks and valleys.

However, the route that connects the Mount Lebanon Range to the fertile Beqaa Valley is not easy to  navigate. After passing through the village of Maaser el-Chouf, the road rises 600 metres in continuous zigzags, and on scaling the heights, drivers are often met with thick walls of fog.

While the roads are scenic, they are also narrow and can be thick with traffic. Cars will often be seen reversing for long stretches in order to allow oncoming traffic to pass by, and drivers can be stuck there for hours.

Despite this, many Lebanese still use the route. Some even park their cars on the road and enjoy shisha and coffee amid the snow-covered mountains.

Road 77, also known as the Haraz Road, is an alpine route that links the Iranian capital Tehran to the city of Mahmudabad on the southern coast of the Caspian Sea.

This high-altitude route is an essential highway, as it is the shortest way for people to travel from Tehran to the northern coast, which is blocked by the intimidating Alborz mountain range, home to the tallest volcano in Asia – Mount Damavand.

At 2,701 metres above sea level, at its heighest, Road 77 cuts right through this magnificent mountain range, making it a key access point for anyone wanting to hike, or catch a closer view of Mount Damavand.

But its many tunnels have destabilised surrounding terrain with rock falls, and even avalanches are possible. Those lucky enough to evade a wayward rock can be stuck in traffic for hours, and sometimes days, as debris is cleared from roads.

Congestion can also be an issue during public holidays and weekends. In response, Iranian authorities sometimes turn the major highway into a one-way road for hours at a time, leaving people waiting in the freezing mountains until the traffic clears up.

Those risks have not stopped Road 77 from becoming one of the most important routes in the country, and those patient enough are rewarded with some of the most spectacular scenery in West Asia on their way.

This road blends unassumingly into the landscape, with its wide, asphalt-covered lanes, but the D915 has been called the world’s most dangerous road, even beating Bolivia’s Death Road according to some.

Halfway through the journey, the route becomes extremely narrow and turns into a dirt track. Not that unusual; except the D915 was mostly built on cliff edges and has no barriers to protect those brave enough to attempt to cross it.

The road is also frequently covered in snow and fog, making the journey arduous for even the most careful drivers. On a clear day, some stretches can take hours to drive on, particularly on the Derebasi bends, which has over 13 turns on the single stretch of road and reaches an elevation of around 2,035 metres above sea level.

Despite the risks, brave locals have not been deterred, especially as the road is an essential route linking the Anatolian town of Bayburt with the Turkish Black Sea region.

The Bayburt-Of road has become popular in recent years among thrill-seeking tourists.

The Trans-Sahara Highway is a 4,500km-long international road that crosses Algeria, Niger and Nigeria, with around half of it running through the barren deserts of Algeria.

The desert climate gives motorists two unique challenges to deal with; the extreme heat of the day, and frequent sandstorms, which can obscure visibility and cause confusion. As a result, many choose to drive at night, but that comes with risks too, as the road has barely any lights and a breakdown in the darkness can leave travellers stranded in formidable desert.

For those not put off by the risk of being stranded in the desert, banditry is also common along some spots. The route is around 80 percent tarmacked, with the rest, particularly in Niger, being dirt-tracked.

Like the other routes that appear here, the extreme conditions on the road have not discouraged local traders and tourists from travelling on it.