World Cup 2022 qualifiers: How did Middle East and North Africa teams do?

Tunisia and Morocco join Iran, Qatar and Saudi Arabia at this year's tournament - as Egypt and Algeria crash out in dramatic circumstances 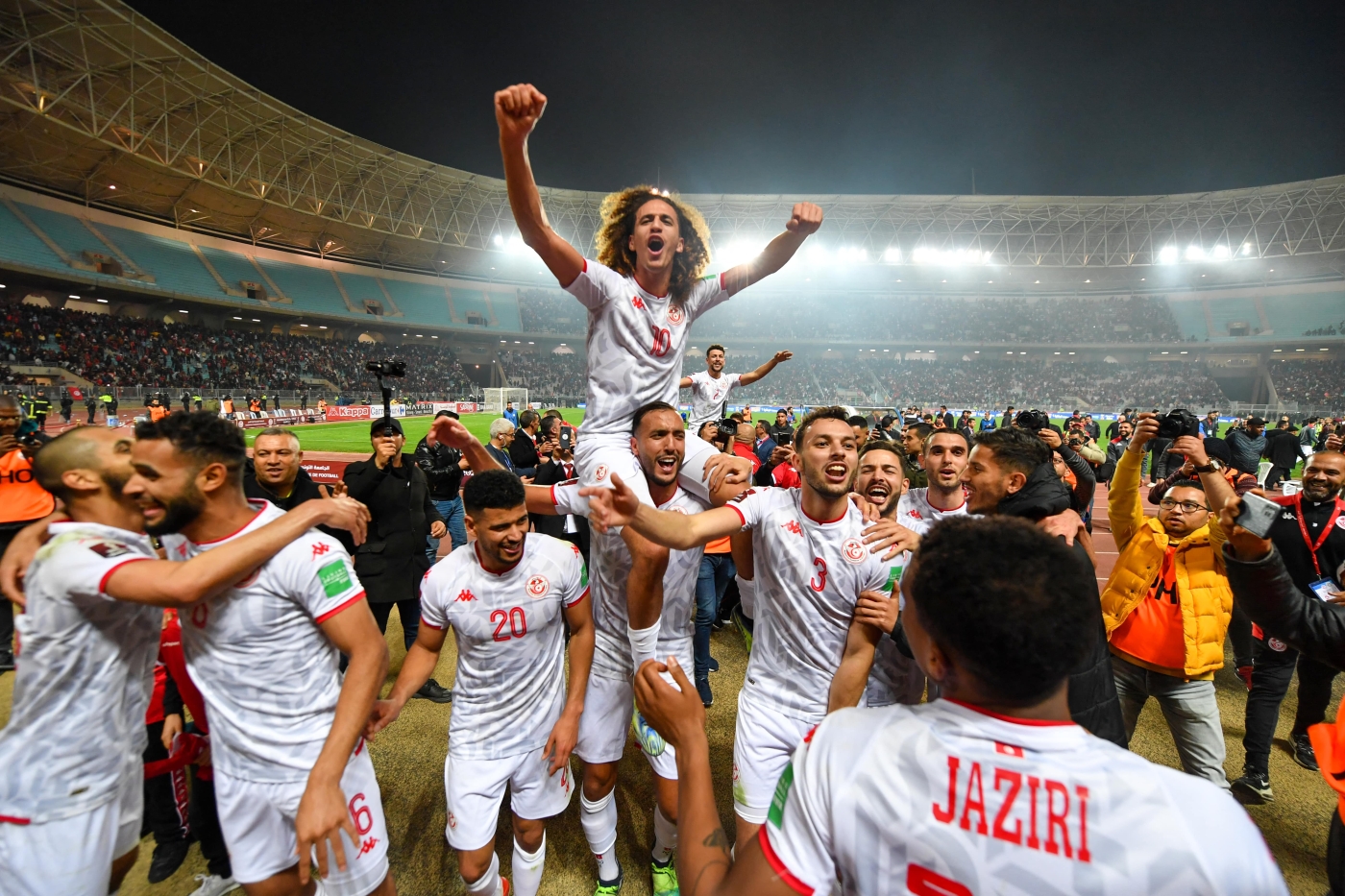 Tunisia celebrate qualifying for Qatar 2022 after their match against Mali in Rades, on 29 March 2022 (AFP)
By
Rayhan Uddin

An eventful and action-packed week of World Cup qualifying matches has come to a close, as nations from across the globe battled it out to make it to Qatar 2022.

From lasers distracting players on the pitch to dashed dreams, the past week has seen dramatic matches play out for several countries across the Middle East and North Africa region.

The World Cup will take place in the northern hemisphere's winter months for the first time, and it will be the first time the quadrennial event takes place in an Arab country.

Here’s what you need to know about how the MENA teams fared, and who made it to the tournament.

Tunisia secured their place in Qatar after a hard-fought 0-0 draw against Mali in Tunis. They had won the first leg in Bamako by a single goal. Mali had beaten Tunisia just weeks earlier, in the group stages of the Africa Cup of Nations (Afcon).

Meanwhile, Morocco cruised into football’s biggest international tournament with a dominant 5-2 aggregate win against Congo. After the first leg in Kinshasa finished 1-1 last week, the Atlas Lions won the return leg 4-1 on Tuesday night, with Paris Saint-Germain’s Achraf Hakimi among the scorers. This is the sixth time that Morocco and Tunisia have each qualified for the World Cup.

Egypt dumped out amid laser controversy

Egypt failed to make it to the World Cup after losing a penalty shootout against Senegal - for the second time in six weeks.

The Pharaohs won the first leg 1-0 in Cairo, while Senegal matched that result over 120 minutes in the return leg in Dakar, following extra time.

It forced Tuesday’s game into a tense penalty shootout, in which all of the first four penalties were missed - including one by Egyptian superstar Mohamed Salah, which sailed over the bar.

I mean, just look at this. Salah sails his penalty over… and surely anybody would, given the lasers.

Mane scores, Senegal wins the shootout, Egypt out of the World Cup pic.twitter.com/tgHmCmW8uu

Just like he did in the Afcon final last month against the same opponent, Liverpool’s Sadio Mane scored the winning penalty, to claim a well-deserved victory.

The biggest talking point after the game was lasers: the game was marred by scores of Senegalese fans shining green lights on Egypt’s players throughout the match. This intensified during the shootout, and may well have contributed to the Pharaohs’ penalty misses.

The lasers became a subject of memes and criticism following the final whistle last night. Many were quick to point out that Egypt fans were no strangers to using the distraction tactic against opposition players in the past.

As well as lasers being the centre of controversy on the pitch, Egypt also lodged an official complaint against Senegal after the match, stating that they were subject to racism and "terrorised" by the home fans in Dakar.

"The Egyptian team was subjected to racism after the appearance of offensive banners in the stands aimed at the players, specifically Mohamed Salah," Egypt's Football Association said in a statement. "The Senegalese fans terrorised the Egyptian players by throwing bottles and stones at them during the warm-up, as well as attacking the Egyptian team bus, which caused glass shattering and some injuries."

Algeria failed to qualify for this year’s tournament, in even more dramatic circumstances than Egypt.

Having beaten Cameroon 1-0 in Yaounde last week, Algeria were a goal down after the 90 minutes were up in the return leg, in the city of Blida. That forced the game into extra time, in a match dominated by the North African team.

In the 118th minute, Ahmed Touba thought he had scored the goal which would send the Fennec Foxes to Qatar.

But Cameroon’s Karl Toko Ekambi scored deep into injury time, with virtually the last kick of the game - bringing the aggregate score to 2-2, dumping Algeria out on the away goals rule.

Algeria’s manager, Djamel Belmadi, was inconsolable after the match, sinking to his knees following the late twist.

After going unbeaten for 35 games, which included winning the 2019 Afcon title and the inaugural Fifa Arab Cup, Algeria have had a torrid start to the year - crashing out in the group stages of this year’s Afcon, and now failing to make the World Cup.

Saudi Arabia, Iran and Qatar through

Tunisia and Morocco will join three other teams from the Middle East and North Africa at the World Cup.

As hosts, Qatar were the first team to be guaranteed qualification for the tournament, and have steadily improved their squad since winning the bid to host the event over a decade ago.

Over the past decade, the country has invested heavily in the Aspire Academy in Doha, with the ambition of developing top-class footballing talent.

Meanwhile, Iran secured their spot at the tournament back in January, after a 1-0 win against Iraq meant they were guaranteed to finish in the top two of their qualifying group.

They followed that victory with a 2-0 win against Lebanon on Tuesday, in a match overshadowed by female fans being pepper sprayed by authorities and denied entry into the stadium. Despite 2,000 tickets being reserved for women, thousands were blocked from entering the stadium in Mashhad, northeastern Iran.

Saudi Arabia also confirmed their qualification over the past week, finishing top of their group ahead of Japan, who also qualified.

Meanwhile, the United Arab Emirates’ hopes of making it to their first ever World Cup are still alive. A 1-0 win against South Korea now means the Emiratis will play a one-off play-off match against Australia in June - and the winner will play Peru to secure one of the final places at the tournament.

In the European play-offs, Turkey failed to advance to the final stages of qualification after losing 3-1 to Portugal.