Poetry of protest: The award-winning photo that captured Sudan's revolution 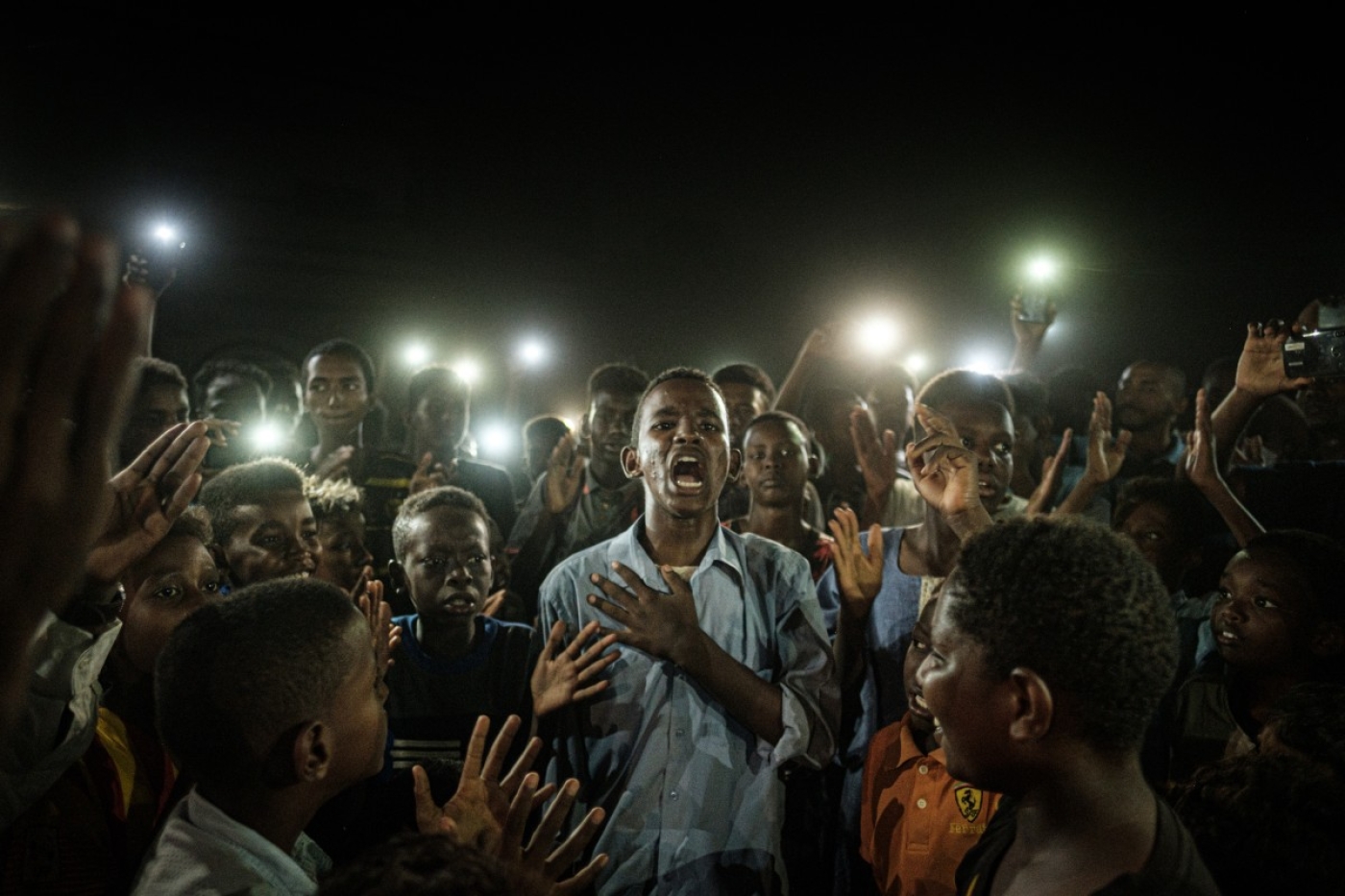 By
Mohammed Amin
in
Khartoum

It was two weeks after a brutal dispersal of a protest sit-in outside Khartoum's army headquarters on 3 June 2019. Thousands of Sudanese protesters were still on the streets defying military rule, in a months-long movement that had removed long time dictator Omar al-Bashir in April.

A young man was reciting poetry surrounded by listeners who provided light with their phones. This was the moment captured by Agence France Press photographer Yasuyoshi Chiba.

Did we not all come from Adam,
Isn’t Adam the father of humanity?
[...]
Raise your hand, son of Adam:
Freedom, Peace, Freedom.

In Chiba’s photograph, Youssef is illuminated by torches from dozens of mobile phones while he recites poetry. "Though I could not understand him at the time, his facial expression and voice impressed me. I could not stop focusing on him to capture the moment,” Chiba writes.

He continues: "When my colleague explained they were reciting poems, it surprised me … These people were using poetry, their cultural background, as a form of protest. It was beautiful."

Sudan: Hundreds of protesters take to streets for those missing since sit-in dispersal
Read More »

Like on other nights, Youssef had marched with other teenagers from his neighbourhood, Gabra, in the northern part of Khartoum, chanting slogans that called for freedom, peace and justice.

“I began to chant with some friends and recited poetry in order to mobilise the people, it motivated the people really and they began chanting with me and their fears left them,” he says.

Hundreds of youth chanted after him, but he didn’t expect that this night would be captured and seen by the world.

Photos from the Middle East have won the international competition in the past, including 2011’s winner - an image of a mother cradling her 18-year-old son, who appears to struggle after inhaling tear gas at a protest in Sanaa - taken for the New York Times by photographer Samuel Aranda.

In 1993, the winning photo by Magnum photographer Larry Towell was of a group of Palestinian boys raising toy guns in a gesture of defiance. The picture was taken after Israel closed its border with Gaza, causing economic hardships and unemployment for Palestinians.

Judges select their shortlists based on the image’s ability to offer a “visually compelling insight” to the world. “It’s about the potential impact of the image on society,” writes Lekgetho Makola, chair of the 2020 Photo Contest jury.

"It reinstates the strength that I think people need to see more often to be able to keep the hope alive, to fight these big battles that people are fighting.”

But for Youssef, the photo - let alone the award it would garner - was a complete surprise: “I didn’t notice that the photographer was taking these photos, and I never imagined I would be a symbol of the struggle of this great nation,” he says.

Youssef, a secondary school student, told MEE that on the day the photo was taken protesters had organised a political gathering, to call for government accountability for those who were killed on 3 June.

That was the day hundreds of protesters lost their lives when military forces opened fire on unarmed pro-democracy protesters, who were staging a sit-in near the army headquarters in the capital.

The days following 3 June were filled with fear and uncertainty. “The atmosphere in the entire capital of Khartoum was very tense in the days that followed the dispersal of the sit-in,” Youssef says.

“The Rapid Support Forces (RSF), [a paramilitary force] and the agents of the old regime were everywhere, firing live bullets and cracking down on the protesters, the internet was down and the entire capital witnessed a full power blackout.”

Following another crackdown on 30 June, which left seven people dead and scores injured, the opposition and the ruling military council signed a power-sharing agreement on 17 August 2019.

Youssef’s mother Lubna Medani, 43, told MEE that she has always worried about Youssef, the youngest of her five children, as he has actively been involved in the protests since they began at the end of 2018.

“Even though I’d been worried and very tense, when I knew Mohamed’s photo won the [World Press Photo] award for 2020, it was the proudest moment in my life as a mother,” she says.

His father, Youssef Osman Youssef, a 58-year-old facial reconstructive surgeon, believes the atmosphere of revolution and change that his son has grown up in has helped shape his willingness to sacrifice for the Sudanese people: "Me, my wife, his brothers and sisters, all participated in the revolution from different perspectives.”

Youssef’s older siblings were part of resistance committees at university, and his father was one of the organisers of the Sudanese Professionals Association (SPA) that led the protests.

“But Mohamed began his contribution from a younger age,” his father says. “His sacrifices have become part of the Sudanese revolution.”

Youssef, now back in his second year of high school, however, expresses his discontent with the post-revolutionary transitional government, saying the pro-democracy protesters are disappointed most of their demands haven’t been implemented, including justice for those who were killed in the revolution.

“After the many sacrifices we made - including the death of thousands of people from Darfur to Khartoum - the government we brought in is not doing well in achieving our goals in freedom, justice and peace,” he says.

“We are sad to see that the old regime agents are still free to destabilise the country, the economic hardship is still there and the health, education and other sectors haven’t been improved at all."

But one thing that has been achieved is his image immortalising their struggle, a symbol of the sacrifices made by the Sudanese youth.

Youssef now wants to use his fame in the local community - as the face of the prize-winning photograph - to honour the Sudanese revolution and those that lost their lives in the protests.

“I feel very proud to appear in the photo but, more importantly, I feel proud of the Sudanese revolution, and I hope that the dreams of the Sudanese people for freedom, justice and equality will soon be achieved,” Youssef told MEE.

“What I did that night [19 June 2019] is what we normally did every night back then. That moment wasn’t about me, but it was about hundreds of thousands of youths who were fighting for their freedom and dignity.” 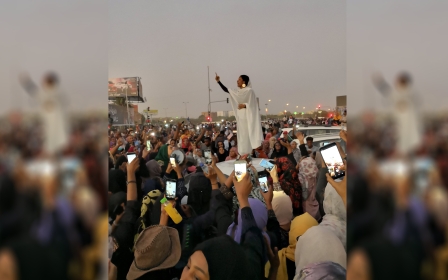 Sudan Protests
Scared, worried and hopeful: A Sudanese photographer's view of the uprising 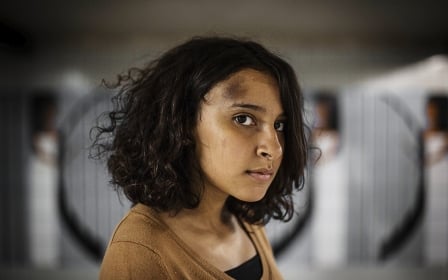 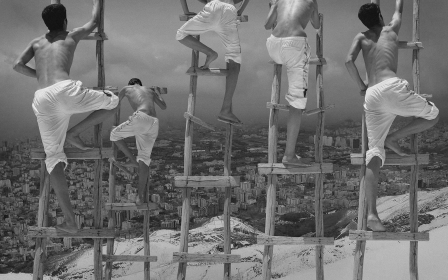