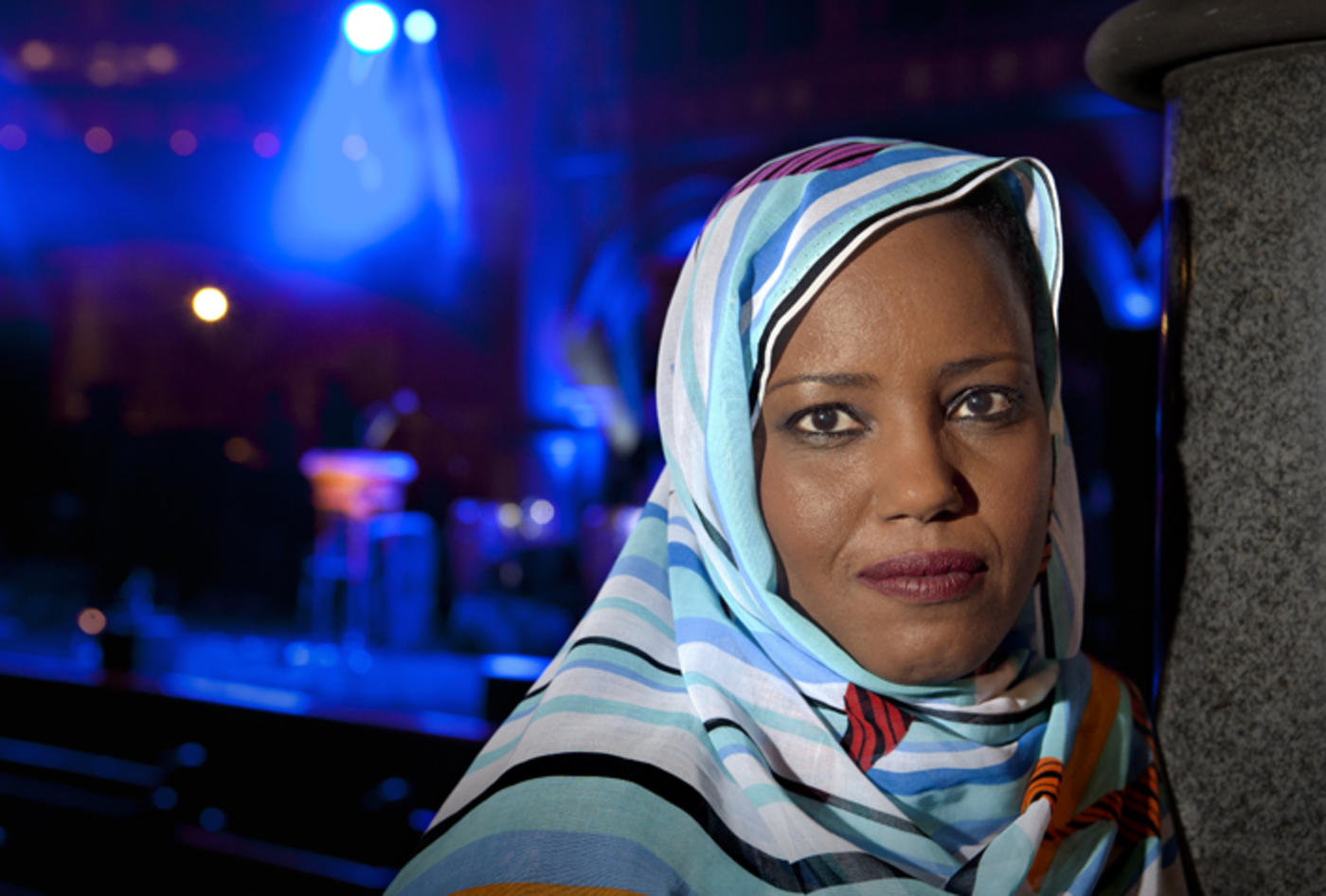 Aziza Brahim after her concert at the Union Chapel, part of the London African Music Festival in London. She says that Western Sahara is her true home (MEE/Angeles Rodenas)
By
Angeles Rodenas

As with most children, the first instrument Aziza Brahim learned to play were the palms of her own hands, clapping and beating out a rhythm that came naturally to her. Next came a rudimentary version of the traditional Saharawi drum tbal which was, for her, an improvised upside-down plastic bucket. Even in the harsh corner of the Saharan desert where Brahim was born a refugee, desperately scarce resources could not silence her music.

Back in 1975, her then-pregnant mother was forced to flee her native land alongside more than half of the indigenous population of the Western Sahara, when the war against the occupying forces of Morocco - and briefly Mauritania - broke out soon after Spain abandoned their colonial protectorate.

Across the border, the refugees set up camps in the Hamada, the rocky desert of Algeria’s southwest area where Brahim was born one year later. She would never meet her father, who stayed behind to defend their homeland and died fighting against Morocco.

But these hurdles clearly have not stopped Brahim from becoming one of the best-known Saharawi voices and representatives of her people’s plight. Her fourth album, Abbar el Hamada (Across the Hamada), has topped the world music charts in Europe twice this year. It follows on from the successful Soutak (Your Voice), which propelled her to international recognition.

A promise of self-determination

In her latest work, Brahim reflects on the recent history of the Saharawi people. The armed conflict ended in 1991, with the promise of a referendum for self-determination supported and monitored by the UN special mission MINURSO that is yet to be implemented. Morocco administers the region unilaterally while Saharawi citizens say they have been subjected to abuse, detention and mistreatment on a regular basis.

The unresolved political situation has separated families and left 160,000 people living in limbo under the self-proclaimed government-in-exile of the Saharawi Arab Democratic Republic (SADR), the Polisario Front, a government without a state that this year commemorates its 40th anniversary. It is the last territory in Africa pending decolonisation and holds one of the biggest phosphate reserves in the world, as well as gas and oil.

And yet, Brahim's songs sound hopeful and energetic rather than angry or sad, for a positive attitude is crucial to conveying her message. "I firmly believe in peace and in the fairness of my people’s cause and I try to elevate that plight through my songs in a musical environment without borders," she tells Middle East Eye.

She sees peace as being the only way forward. "The Saharawis who have been living in the Hamada for 41 years are a clear example of how difficult it is to achieve peace. All we know is that wars don’t restore peace. Instead they bring more injustice, displacement and suffering."

The tireless resistance of peace

There is a powerful serenity in her explanations that the three-hour flight delay in her already tight schedule cannot disturb (the interview takes place before her concert at the Union Chapel in late September). Perhaps it is in the nature of the generations born in the Algerian camps, who have made peaceful resistance the centre of their tireless demand for a vote to decide whether they want to integrate with Morocco or be independent.

Social commitment is embedded in Brahim’s songs as a necessity and responsibility. "I need to talk about the suffering of my people because, although I live in Europe, my whole family is still in the refugee camps. But I also see it as something I must do and I feel proud to be representing my people and being the ambassador of our cause."

Music has always played a big part in Brahim’s life. Her grandmother, the poet Ljadra Mint Mabruk, was a decisive influence. Now in her eighties, she is also known as "the poet with the rifle". She fought at the beginning of the war and wrote poems that documented what was happening in the 70s and 80s. They were read in the camps and on the battlefield to raise people’s moral.

"My grandmother is a great source of inspiration," says Brahim, who paid tribute to her in her second album, Mabruk. "She motivated me to learn music when I was a little girl and passed on her passion for creativity and ethical commitment to me.

"She would encourage me to create music for her poems and used to take me to her poetry readings. When I started creating my own music she listened to me. She has always been very supportive of my work."

From Havana to Barcelona

Like many Saharawi children, Brahim moved to Cuba at the age of 11 to continue her studies with a scholarship from the government in Havana. An important ally in the decolonisation process of many African countries, Cuba supported the Saharawi cause from the beginning and since 1977 has granted thousands of scholarships to Saharawi children and undergraduates, an experience that Brahim cherishes.

"I learnt to be stronger, more supportive towards others and to confront the difficulties that life throws at you. I also received an education. In a refugee camp everything is very limited and comes from humanitarian aid. Cuba contributed massively to our lives," she reminisces.

But she could not formally study music on the Caribbean island, despite having achieved very high grades in secondary school. Brahim was instead advised to pursue a career in law or medicine as the best way to help build the emerging Saharawi state. That seemingly pragmatic logic seemed to ignore the fact that in her culture, traditions had been passed on verbally from generation to generation, and music has always been a way of preserving that cultural heritage.

Undeterred, Brahim returned to the refugee camps in the 90s and began to sing and play in different bands before settling in Spain in 2000 to develop her own project. She now lives in Barcelona, has dual nationality and in her concerts is introduced as a Saharawi/Spanish musician, although this does not stop her from criticising the Spanish authorities for not taking action in the conflict.

"Spain bears the blame almost entirely for handing our territory to Morocco during Franco’s dictatorship, and all the consecutive governments have ignored what today still is province number 53 of the Spanish state. However, civil society has always been very supportive of our people through different NGOs," she concedes.

Why music works better than politicians

Brahim is convinced that music is a powerful tool to spread the message of people's plight because people listen and engage with it. "Many of us are so disappointed with politicians that we don’t believe in them any more.

"However, we do believe in music. It is a universal dialogue where all the needs, concerns, experiences and wishes really flow. Music is created by the people and for the people, and that makes it a much better way of raising awareness."

'Nobody abandons their homeland for pleasure, but out of extreme necessity that also is often caused by the great economic powers'

Apart from some songs in Spanish, she sings mainly in her mother tongue Hassaniya, an Arabic dialect originally from Bedouin tribes that is spoken in the northwest of Africa. Aware of the importance of getting her political message across, Brahim includes in her albums translations of the lyrics into English, Spanish and sometimes even French.

Inspired by her own world, her songs connect with other realities. Such is the case with The Walls, a piece that refers to the 2,720km military wall - the longest in the world and surrounded by minefields - that Morocco built around the Western Sahara. But it also reaches out to other physical and mental blockades.

"The wall is a disgrace for humanity, as are the barriers that European countries are building to stop the human flow that stem from the current wars," says Brahim. "It is a tragedy not properly addressed, and it will have terrible consequences for all of us."

"Nobody abandons their homeland for pleasure, but out of extreme necessity that also is often caused by the great economic powers. These countries reap the benefits of their bad practices that spread hunger, displacement, segregation… And then they don’t accept the consequences of it in a responsible manner."

While Brahim's lyrics delve into political struggle, the rhythms and sounds in her pieces echo her life experience. In Abbar el-Hamada there are Cuban and Mediterranean rhythms, West African percussion and, of course, her Saharawi roots represented in two "celebratory" and "belligerent" rhythms called Asarbat and Sharaa, as well as in her always present tbal, the instrument she learned to play at a very early age that provides the base to most of her songs.

Traditionally played only by women, the tbal symbolises the unusual status that Saharawi women play in this Muslim and Arab society. They were the ones who raised the children and provided for the family in nomadic times, and they set up the camps and organised life in exile after the Moroccan occupation.

'I have lived in many places and each one of them has been very generous to me... I only know that I belong to a place called Western Sahara'

After the war, many men joined their families in the camps, but mothers and daughters worked hard to maintain their rights. "Women set the rhythm in the Saharawi society," says Brahim. They keep the spirit of the resistance alive and strong, as Brahim is doing now and as did Mariem Hassan, "the biggest artist that my country has produced".

But for someone who has never been allowed to set foot in her homeland, it is difficult to know where home is. "I only know that I belong to a place called Western Sahara because that is where my parents, grandparents, great grandparents… come from.

"I have lived in many places and each one of them has been very generous to me, so I feel I belong to all these places to a certain extent. But my true home is Western Sahara," where she hopes to sing one day."

Then she pauses for a moment and adds: "In a free Western Sahara." 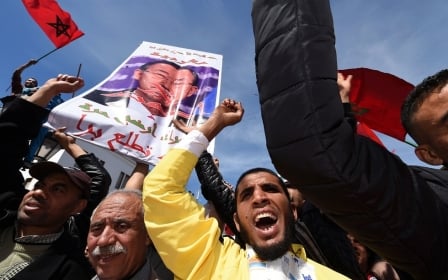