Both a testimony and a reminder of the 51-day conflict in 2014, this is a first-class insight into the struggles of the health sector in besieged Gaza 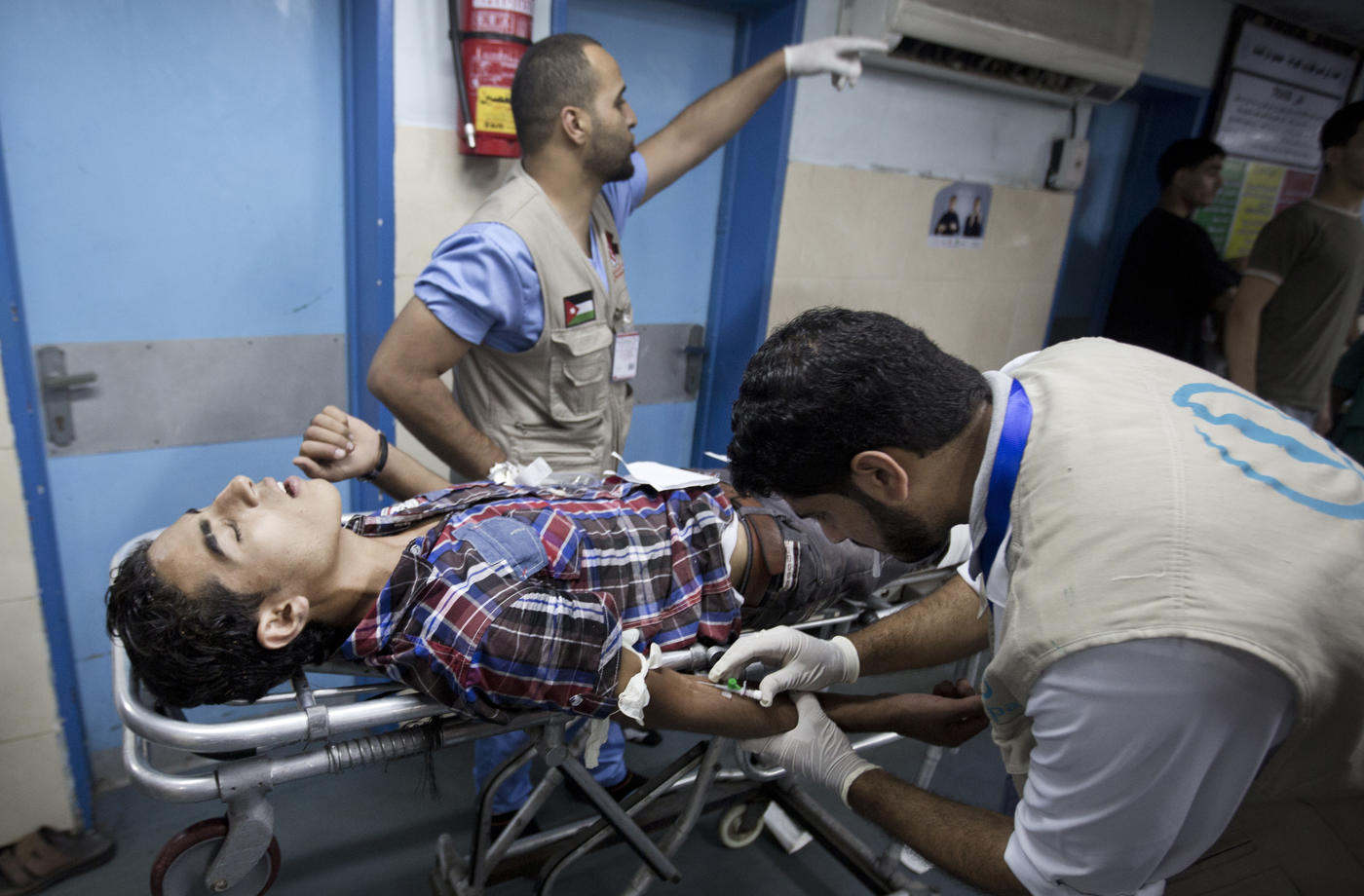 Night in Gaza by Mads Gilbert

There is a compelling genre of conflict literature by surgeons and doctors who have served during the unimaginable horrors of war. Typically their accounts are harrowing and an all too devastating reminder of the real costs, not just to those killed but those left behind.  Perhaps not holiday reading then.

The Norwegian surgeon Dr Mads Gilbert has added to this genre with his experience of events last summer during the Israeli bombings of Gaza, following on from his 2010 book, “Eyes in Gaza,” about Operation Cast Lead.  He is clear from his first words. “This book is a testimony, not an academic thesis or a neutral journalistic report.”

Dr Gilbert is no stranger to conflict.  Aside from working in Gaza during the 2009 and 2012 conflicts as well as the second Intifada, he was also treating patients in Beirut as far back as the Israeli invasion of 1982.  He has also worked in Burma, Cambodia and Angola.

This is a raw look at what happened through his experiences during Israel’s 2014 war on Gaza while based in Al Shifa hospital. Imagine the chaos, the huge numbers of casualties, exhausted staff barely being able to sleep, children with no parents, all with the background music of bombs, shells and drones. The life and death choices – who gets the treatment, who does not?

It is published almost one year after “Operation Protective Edge” and coinciding with the eighth anniversary of the blockade of Gaza. Regular fact boxes of key statistics remind all of the scale of that onslaught from the United Nations. It was the most aggressive and destructive of all Israel’s 12 wars on Gaza.

Gilbert is clear that the mass conflict and the injuries were exacerbated by the blockade. It meant that the population were already in varying states of malnutrition or ill health. Some 3500 children were injured, but nearly all of these children had a diminished starting point when handling the trauma. They needed their immune systems to be healthy, they needed a protein reserve to build new tissue and they needed proper reserves of blood yet 75 percent of those under two suffered from anaemia.

The blockade meant that electricity supply even in the hospitals was erratic. The electricity generators have no spare parts. The ventilators in the intensive care unit frequently stop. At times he and his Palestinian colleagues had to operate only with the light of their mobile phone screens. There is the shortage of everything from medicines to single-use sheets. He has to give stitches to a small boy without anaesthetic - there is not enough for all.

The trauma does not end with surgery. As the head of the hospital Dr Sobhi Skaik tells Gilbert, “Where can they go if we discharge them?” Over 500,000 were displaced in the conflict, and 20,000 homes destroyed.

The book is an exhibition space for powerful human photographs, some of them deeply harrowing images of wounds of every conceivable type but others showing Palestinian strength, dignity and defiance in the face of such carnage. Taken by the author or with his camera, they are considerably more telling than any prose and are the stand out part of the work.

Where the text is most powerful and memorable is when Gilbert gives voice to individual Palestinians. To his credit he never forgets that the story is about them not him. He meets many he had treated in previous conflicts, following up on how they have fared. He recalls visiting Samar in Brussels years after he treated her in 2009. She remembers every moment even though she was only four at the time. There is Amal. Her head still hurts. She still has a huge piece of shrapnel close to her brain that cannot be safely removed. He returns to see Jumana Samouni, injured in 2009, who had had to have her left hand amputated but more terrifyingly lost 30 members of her family.

The 2014 war resulted in huge damage in the health sector with 17 hospitals, 56 primary healthcare facilities and 45 ambulances damaged or destroyed in Israeli strikes. Aside from being based at Shifa, Gilbert visits a paediatric hospital hit by Israeli shelling.

Such doctors and health workers work in such situations at increasing risks. In modern conflicts health workers have been increasingly targeted. According to the ICRC, there are over 2,300 incidents involving serious acts or threats of violence in healthcare settings between January 2012 and July 2014. Syria and the Central African Republic have been devastating examples but sadly in Gaza too, and not just during the 2014 war. The Fourth Geneva convention seems to be a forgotten text.

Mads Gilbert has at times been a controversial figure, often the target for attack by supporters of Israel. (Indeed Israel banned him for life from entry to Gaza in October 2014 for security reasons). They argue that Hamas had a headquarters under Al Shifa. Dr Gilbert hits back that “these allegations from Israel about Shifa are old and never proven. I have never seen any traces of a headquarters, nor firing from Shifa”. He sticks rigidly to the Fourth Geneva Convention and that he “would have quit if any signs or proofs of breaches of international law was evident to me”. As yet Israel has not produced any evidence that proves Shifa hospital was used by Hamas, although there were myriad claims even in 2009. Who knows if it is true, it is just a claim, but it should not diminish from the bravery and dedication of the health workers inside.

Night in Gaza is not the definitive account of that 51-day conflict in the summer of 2014. It does not pretend to be.  As an insight into the struggles of the health sector, it is first-class although other works are required reading for a full picture. But it is both a record and a reminder. If pasted together with other testimonies and evidence including from Israeli soldiers themselves, it highlights just how much Israel’s leaders have to answer for. Once again Dr Gilbert has reinforced his inestimable work as a physician with this simple but damning work.  Let us hope he does not have to repeat the dose in 12 months’ time.

Perhaps appropriately it is a Palestinian who has the afterword in the form of the journalist Mohammed Omer. “A nation which can recycle old spent missiles into flower pots, for buds to bloom in, shows constancy in its dedication to resilience and optimism.”