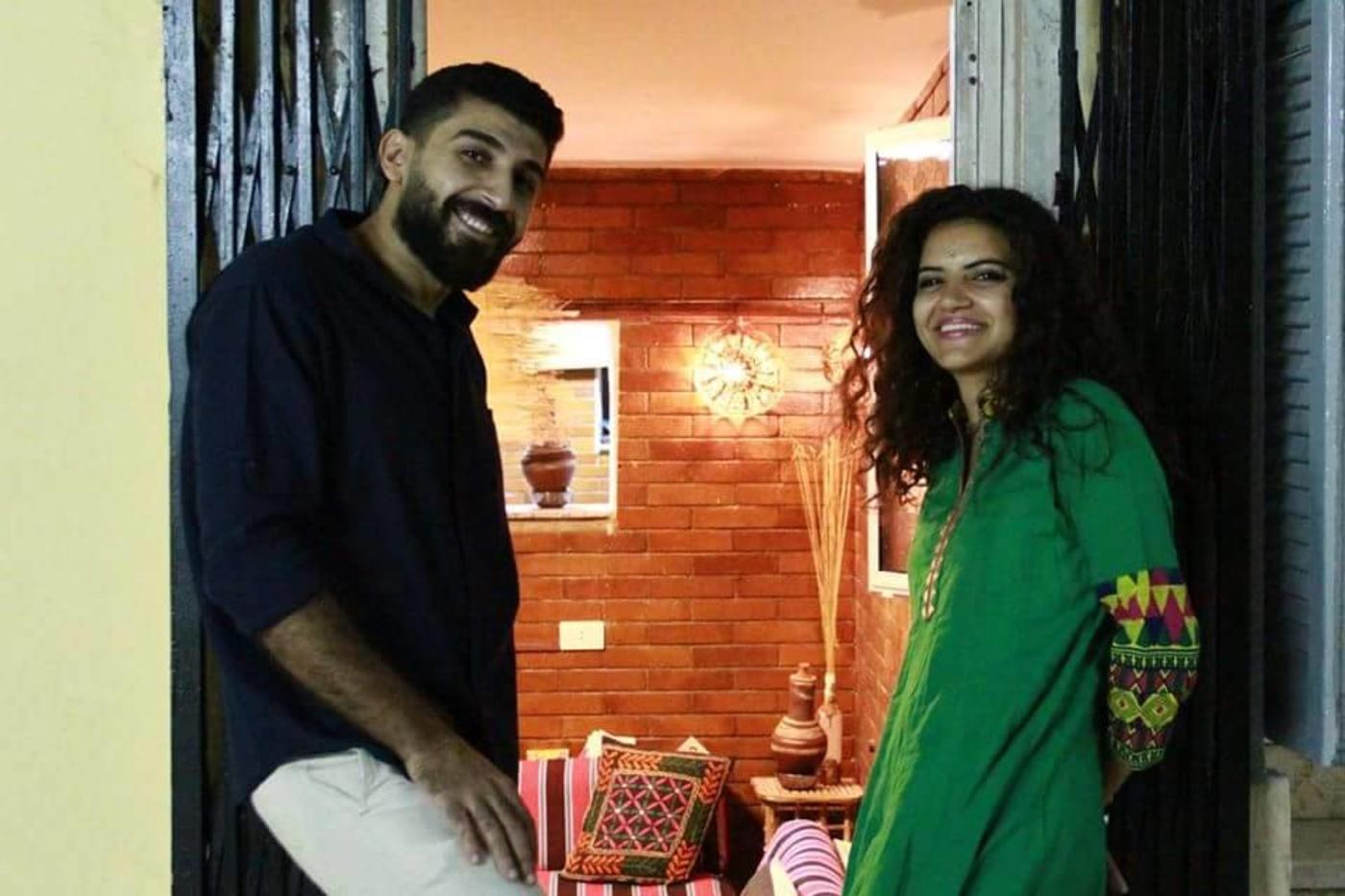 Catherine Raafat and Bishoy Refat at the opening of their restaurant in Cairo in June 2016 (photo courtesy of Restaurant Project)
By
Mohamed Mahmoud
CAIRO - With its dimmed lights, old tunes and lack of wifi, it is the perfect haven for those seeking a quiet space and a good meal after a long day at work. Welcome to Restaurant Project, a small eatery in the basement of one of Cairo's busy downtown buildings that the owners consider to be a "friend of nature".

'The restaurant is entirely made of recycled materials'
- Catherine Raafat, co-owner of the Restaurant Project

"When we thought of establishing a restaurant, we decided to introduce a place that brought us back to nature," said Catherine Raafat, co-owner of the Restaurant Project, while preparing a plate of pasta in the open kitchen. The restaurant was previously just a bunker flooded with sewage.
"The restaurant is entirely made of recycled materials: the seats, tables, kitchen holders and the small library stand," she added.
When Catherine, 26, and her friend Bishoy Refat, 34, inaugurated their "friend of nature", back in June 2016, their ideas were clear: no carbonated soda drinks would be served in the new space, which featured old car tyres and recycled wood as part of its decor. Another strict rule for the restaurant: having face-to-face conversations.

'In other restaurants, people are very busy staring at their mobiles, people are disconnected from each other'
- Amr Ahmed, news producer

For news producer Amr Ahmed, the restaurant is a "calm haven" where he replenishes his energy while talking to friends. "In the beginning, the restaurant attracted me with its simple design. It's amazing that we are eating on a table made from old car tyres," he said, referring to the yellow, blue and brown table where his coffee sits.
Another two tables also made from recycled car tyres fill up the room and there are plenty of chairs to go around. Clients enjoy the idea of disconnecting and some have made it a ritual of it.
"I feel it's a haven after my annoying day, with no mobile connection or wifi. I feel disconnected and this eases me a lot," added Ahmed, who visits the place three times a week. Ahmed and his friends always gather at the restaurant at the end of the day.
"In other restaurants, people are very busy staring at their mobiles, people are disconnected from each other," he said.

'We decided not to install any wifi connection to keep the people connected'
- Catherine Raafat, co-owner of the Restaurant Project

While other restaurants attract clients by advertising they have wifi, this restaurant proudly says they do not have it. "We decided not to install any wifi connection to keep people connected," Catherine said.
Finding a signal from a 3G network proves impossible once taking three steps down through what looks like a big hall. A rectangular table forms a repository for mobile phones. Unable to connect to the bustling city just outside the door, the phones lay flat like silent metal boxes.
"It's very nice to see the clients chatting and talking as if we were in the last century," Catherine said. University students, youth, and young couples looking for tranquillity have made it their go-to hangout.
To most clients, prices are very reasonable when compared with other restaurants. A cup of coffee costs 10 Egyptian pounds (0.55 cents), whereas elsewhere in the area it would cost around 15 pounds.
A special atmosphere is created by the vocal brilliance of legendary Egyptian singer Om Kalthoum and Lebanese singer Fayrouz playing through the speakers. For engineer Mohamed Megahed, "the whole atmosphere puts me in a bubble", he said.
'Back to nature'
"When we decided to establish the restaurant, the revenues weren't our first goal. We decided to offer something new to the community, from freshly delivered food to friendly service," Bishoy said.

'The whole atmosphere puts me in a bubble'
- Mohamed Megahed, engineer

With the help of friends, Catherine and Bishoy bought used wood from ports and recycled it as furniture; old black tyres were amazingly transformed into colourful seats. In case of future expansion or repairs, a small room in the restaurant is used as storage, where unused wood and paints are kept.
"It cost us nothing, if we bought ready-made seats and tables, we would have paid a lot," Catherine said. Energy-saving lamps light up the room, while the floor is covered by colourful handmade carpets and mats from Kedasa district, a renowned destination for artisan products, located west of Cairo. "We really want to help the environment," Catherine added.
Catherine decided to start the restaurant after her career hit a roadblock. She was a tour guide in south Sinai, but the whole tourism industry was plagued by the unrest that hit Egypt in 2011.

'It cost us nothing, if we bought ready-made seats and tables, we would have paid a lot'
- Catherine Raafat, co-owner of the Restaurant Project

Additionally, following the downing of a Russian passenger plane in Sinai in October 2015 that killed 224 people, the whole sector received a severe blow. But when opportunity beckons, Catherine also works as a freelance tour guide, as it is still a passion she holds dearly. "I hope the industry flourishes again. In the end, this is the career I love.”
'Environmental design'
The open design of the restaurant's kitchen allows for clients to be exposed to the cooking process. Old barrels are used as stools surrounding the kitchen's grey marble table where glass jars are filled with an assortment of fresh pickles and herbs. Plastic products are rarely seen in the restaurant.
Catherine's business partner and friend Bishoy believes in recycling containers, as if they were in their own homes.
"We re-use glass jars to store food like at home. It's a kind of recycling that reduces the use of plastic within the place," said Bishoy. Nothing goes to waste in applying this green attitude, and they reap the benefits in myriad ways.
"We don't even throw away cooking oil - we make candles and soap out of it; it's a long, tiring process, but we feel success when we see the final outcome," he added.

'We don't even throw away cooking oil - we make candles and soap out of it'
- Bishoy Refat, co-owner of the Restaurant Project

"I reconstructed the whole place. I fixed the plumbing system and put thermal bricks that smooth the temperature," Bishoy said. For environmental reasons, keeping the space cool without the use of an air conditioner during summer was important to Bishoy. After carefully determining the best location for air redistribution, he put in new windows.
"I called on my studies to figure out how to redistribute the air inside the place so that it is moderate throughout the year's seasons; as a result we achieved our goal not to install air conditioners," he said.
"We only use a fan during the summer, so we don't produce any freon that's harmful to the environment," he added.
Bishoy took off his black jacket and rolled up his sleeves to wash some plates that had piled up in the sink. The two business partners like to get involved in every aspect of their project. "We are very happy when the guests feel like they are at home," Bishoy said, as white plates and cups hung on the wall behind him.
On the left corner of the door, three shelves make a small library with dozens of books on diverse topics. The books are stacked in a way that is meant to encourage clients to grab a book and read. "We want people to read," Bishoy said.

From time to time, Catherine and the staff introduce cuisine from different countries. There is a high demand from clients for Indian food, for example.
"When we held an Iranian day, we played Iranian songs. Food and music are both part of the culture," Catherine said. Catherine and Bishoy say they insist on serving fresh food.
"We don't serve carbonated soda beverages or canned juices or frozen meat," she said.

To help the clients feel at home, they can even participate in cooking their food. "Preparing your meal in a restaurant is always a crazy idea I like to practise," said a petite, veiled lady, while drinking fresh mango juice. Ragia Tarek, a 28-year-old accountant, feels comfortable in her home away from home. "It's nice you feel like the place is yours," he said.
The lack of modern connectivity forces people to socialise and create relationships. "Here we are connected to each other. We can talk, chat and socialise,' said 28-year-old Mosa Ibrahim.
"I feel I'm at home," he added. 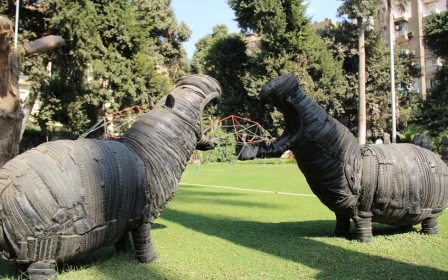 Culture
Why Egypt's modern art is much more than just rubbish 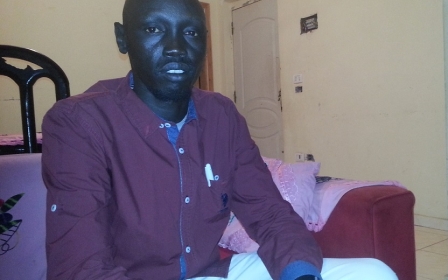 Racism
When they call you 'Negro': Egypt’s Sudanese are prisoners of racism 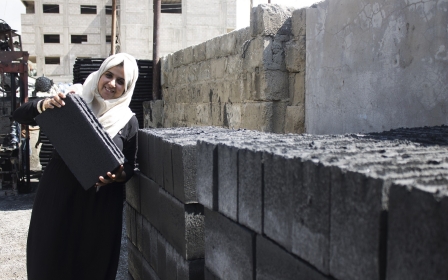