From Gaza to the moon, Palestinian women take the lead at London film festival

Directed by twin brothers Tarzan and Arab Nasser, 'Dégradé' centres on a dozen women at a hair salon on a brutally hot summer’s day in the Gaza Strip (Courtesy of Palestine Film Festival)
By
MEE correspondent

LONDON - This year's London Palestine Film Festival (LPFF) has focused on the resilience of Palestinians in the face of adversity – particularly women.

Of the 11 full-length feature and documentary films and the 21 shorts shown during the 12-day event, more than a third were directed by women or featured strong female leads and themes related to womanhood.

Among the lead roles, there were women astronauts, defiant hairdressers, mothers raising children behind bars and a woman willing to do whatever it takes to conceive a child while her husband is in prison.

The resilience of Palestinian women in this year's LPFF is perhaps a fitting motif: in the past year, Ahed Tamimi, a 17-year-old Palestinian activist, became the face of protests after she was imprisoned for eight months for slapping an Israeli soldier.

In July, hundreds of Palestinian women – many of whom had lost relatives during the Great March of Return demonstrations – participated in the "Palestinian Women for the Return and Breaking the Siege" protest, calling for an end to the Israeli blockade on Gaza and the right of return for refugees who were displaced when the state of Israel was created in 1948.

The festival made a comeback in the UK capital following a two-year hiatus due to funding issues. The rich array of offerings at LPFF, which will end on 28 November, has included docudrama, science fiction, animation, shorts, and feature films as well as the launch of author and professor Nadia Yaqub's book, Palestinian Cinema in the Days of Revolution.

Of all the films, Dégradé (2015), directed by twin brothers Tarzan and Arab Nasser (also known as Ahmad and Mohammed Abou Nasser), stole the show with the acting prowess of its majority-female cast.

Screened at East London's Rio cinema, the film centres on a dozen women at a claustrophobic hair salon on a brutally hot summer’s day in the Gaza Strip. The directors have said the film encapsulates the diversity that exists among women in Gaza, challenging prevailing stereotypes.

The women – one pregnant, one about to get married, one divorced, and one overly devout – are increasingly irritated by each other as they await their turns to be made over by the Russian hairdresser who owns the salon and her assistant, a young Palestinian woman who appears to be in a co-dependent, suffocating relationship.

Outside the salon, tensions between a mafia-esque family, which has stolen a lion from Gaza's zoo, and Hamas brew until they escalate into full-on violence. The bizarre subplot is in fact rooted in real-life events from 2007.

The women's bickering and the street violence crescendo in tandem. The salon is masterfully used as a vehicle through which the directors illustrate the cruel isolation and political desperation endured by Gaza and Palestinians who have little control on both internal and external forces.

There are, of course, subtler ways to tell this same story, which at times feels like a heavier, grittier and more jarring version of Nadine Labaki's Caramel. But the performances, particularly those of Hiam Abbass, an ageing and agitated single woman, and Manal Awad, a victim of domestic violence who buries her woes in her sense of humour, are haunting.

Bonbone (2017), a 15-minute short film directed by Rakan Mayasi, which was also screened at the Rio, features Lebanese-American actress Rana Alamuddin (also known as Raya Meddine), who starred in Nazareth-set father and son drama Wajib, as well as Sex and the City 2 and The Young and the Restless. Alongside her is the formidable Palestinian actor Saleh Bakri, known also for his performance in Wajib and The Band’s Visit.

The protagonists go to extreme and creative lengths to ensure they will have a child together, as the husband is in jail and conjugal visits are forbidden.

In this deeply dark depiction of the difficulties of living under occupation, Alamuddin's character utilises her sexuality in public spaces to ensure procreation on her own terms – and not Israel's. It is a gripping and artful narrative that renders Palestinian women the masters of their own fate.

Again carrying the theme of motherhood is 3000 Nights (2015), Palestinian director Mai Masri's first feature-length film, which tells the story of a Palestinian schoolteacher who is unjustly sentenced to jail for eight years for being an accomplice to a crime she was not involved with. While in a women's prison, she gives birth to a baby boy whom she fights to protect as she raises him behind bars.

The movie, Jordan's official entry to the 2017 Oscars, was shot in a real prison and inspired by the true story of a woman whom the director met while filming a documentary in her hometown, Nablus.

3000 Nights sheds light on the conditions endured by Palestinian women prisoners, of whom some 10,000 have been incarcerated or detained by Israeli authorities over the past half-century. There are currently 52 Palestinian women who remain in detention.

Nation Estate (2013), Larissa Sansour's futuristic reimagining of a Palestinian state in a high-rise tower overlooking Jerusalem, filled with holograms of the Al-Aqsa Mosque and other historical sites, stretches the mind with its ambitious and fresh dystopian take on a decades-old political crisis.

The film is fascinating to watch from a visual perspective: in Sansour's absurd, twilight world, existential anxieties are addressed with keycards, holograms, electronic passports and ready meals.

In addition to sci-fi, Sansour's at times obscure and lofty work more broadly fuses art installations, computer-generated imagery and electronic music with an Arab edge, making her one of the most daring Palestinian directors in the festival and indeed beyond.

In another two Sansour shorts screened at the festival, A Space Exodus (2008) and the somewhat cerebral In the Future, They Ate from The Finest Porcelain (2015), both of which were also crowd pleasers, the director skilfully thrusts her epistemological ideas of Palestine and its people into both the past and the future.

A Space Exodus sees Sansour plant a Palestinian flag on the moon, echoing Neil Armstrong's 1969 moon landing. "Jerusalem, we have a problem," she says, to no one in particular. Through this absurd prism, the absorbing film forces us to contemplate the West's role in the Palestinian predicament, the solitary nature of living in exile and having to contend with a fractured identity and political crisis with no solution in sight.

In the Future, They Ate from The Finest Porcelain, in which a resistance group led by a woman deposits porcelain into the ground for future archaeologists to excavate, similarly transports viewers to a vast and futuristic landscape. The occasionally abstruse dialogue is overshadowed by Sansour's stunning and otherworldly visuals, making for a riveting cinematic experience.

The metaphysical and surreal nature of her work brings to mind the films Blade Runner, which she cites as an influence, The Shining, and 2001: Space Odyssey, as well as hints of Charlie Brooker's Black Mirror and David Lynch's Twin Peaks. Notably, all of Sansour's leads are women, and she stars in A Space Exodus and Nation Estate herself.

Sansour, who is also an artist and was shortlisted for the MAC International Prize this year, said during a Q&A after the screening at Rio Cinema that "science fiction can offer its own universe, where I don't have to be dictated by the general political rhetoric that relates to Palestine."

The audience had far more questions than the Rio's schedule could allow for, a sign that Sansour's work, though niche, is in demand.

Sansour is in the process of securing funding for her first full-length feature film. Though she didn't elaborate on what the film will be about, she did say the required budget is sizeable.

Also focused on the Gaza War and based on true events is One Minute, in which a mother panics as she is instructed by the Israeli army to evacuate her home. The Chair tells the story of a Jamaican-born Palestinian woman who visits her homeland and is abruptly confronted by traditions wholly unfamiliar to her.

The HOPING Foundation, also known as Hope and Optimism for Palestinians in the Next Generation, will host the festival's closing night on 28 November at SOAS University, with a spotlight on Palestinian refugees.

Campaigner and designer Bella Freud, a co-founder of HOPING, will be in conversation with BAFTA award-winning writer and director Peter Kosminsky, UNRWA spokesman Chris Gunness and director Samer Salameh, whose film, Us, Children of the Camp, is the festival's last.

The panel discussion will focus on "the power of film as a means to show the daily reality of Palestinian refugees".

The London Palestine Film Festival opened on 16 November and concludes on the 28th. 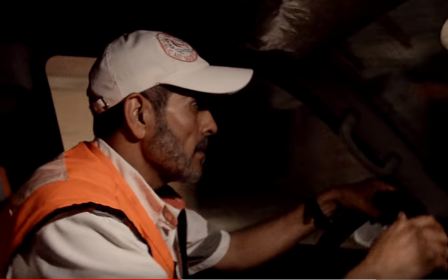