Gaza's man from NASA: ‘We must see past the drones and reach for the stars’

After years of working at NASA, Professor Suleiman Baraka has returned home and is now bringing astronomy to the people of Gaza 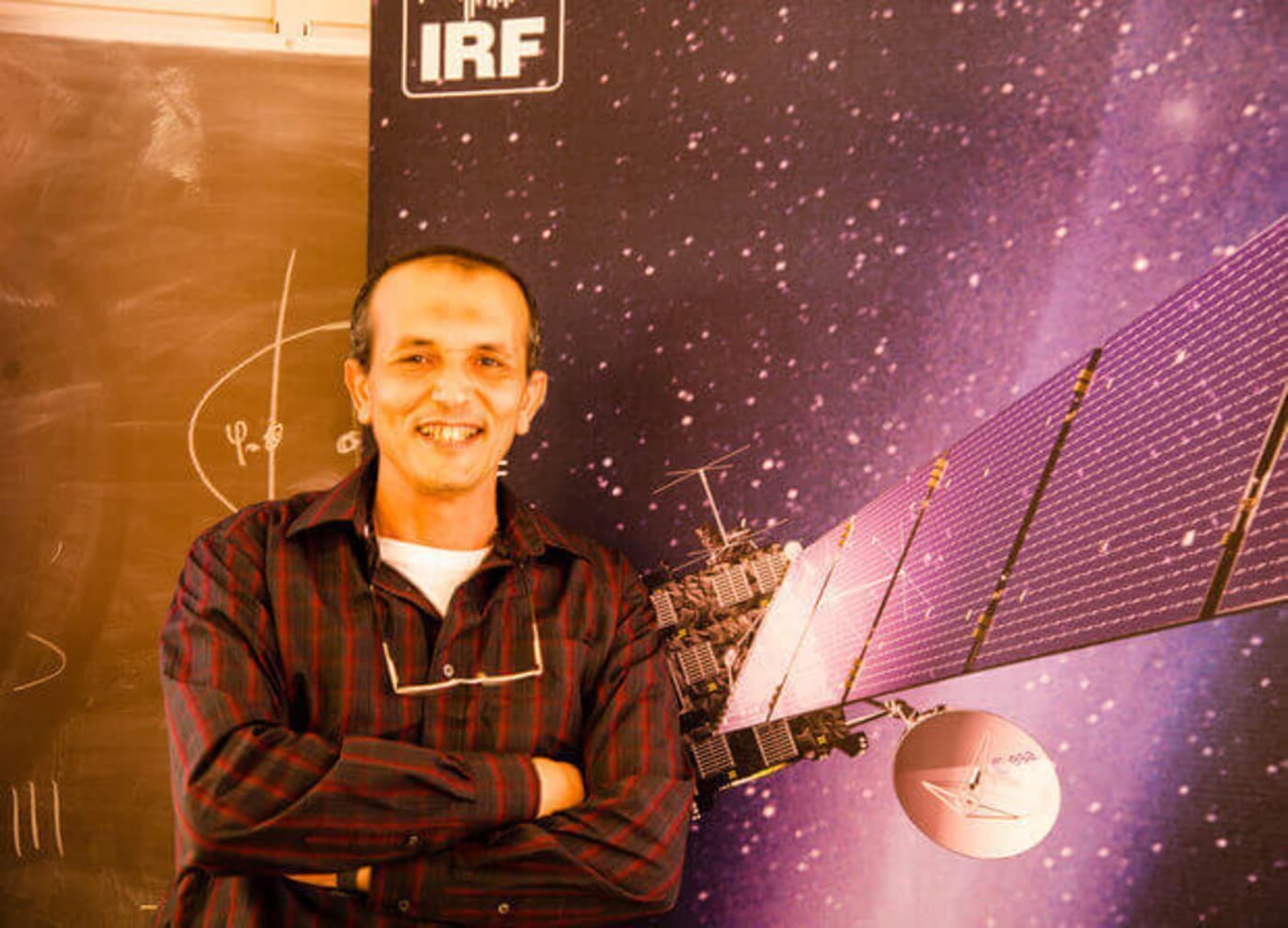 Professor Suleiman overcame personal loss and discrimination and has now returned to Gaza to bring astrophysics to his people (Photo courtesy of Prof. Suleiman Baraka)
By
Mohammed Omer

“I have decided to move from the great expanse of the universe to a small pocket of land on earth,” says the well-known Palestinian astrophysicist and NASA scientist Professor Suleiman Baraka.

In early 2016 he left America, where he worked at the NASA space agency, and returned to the blockaded coastal enclave of Gaza, saying he always felt a magnetic pull calling him to return home.

As a child, he had a passion and wonder for physics. “It's something that I've always been very interested in, contemplating how and why things happen,” he says.

He got his Bachelor's degree in Gaza in 1978, then his Masters degree, and thereafter was offered a place on a PhD study programme in France.

Later, he moved to work in the US, at Virginia Tech, with the NASA space agency.

“That was a turning point in my life - in the life of any young man - to work with an organisation that has developed, and is developing, some of the most extraordinary modern-day visions with a real capacity to change history,” he says, as he sits in his office, making use of what little electrical power he has between blackouts, to transmit his data to his scientific colleagues abroad.

He recalls the first time one of his American professors nicknamed him the “PLO guy,” making light of the fact that some Israeli classmates expressed dissatisfaction about having a Palestinian in their midst. Now, Baraka jokes about it.

“That night the American security agencies contacted my supervisor because there were pro-Israelis who said their children didn't feel secure with a Palestinian in class who they feared might blow everyone up!” he said.

“Of course, this is a stereotype which has no meaning, and we as Arabs should not accept this,” he told MEE with a smile and a shake of his head.

However, his American scientist colleagues recognised his abilities as an astrophysicist and researcher, specialising in the magnetosphere that surrounds the earth. Dr David Sibeck, NASA’s mission scientist for the THEMIS space weather project, said: “Dr Baraka represents exactly the kind of researcher suited for research on space-age projects: energetic, ever curious, able to communicate with both the general public and the specialist.

"His talents lie in using numerical simulations to predict phenomena that can be confirmed with NASA’s spacecraft observations. As such, he embodies the best in the long tradition of rigorous intellectual inquiry dating from the times when the Arabs were the leaders in preserving and enhancing our understanding of the world around us.”

The successful career of this 51-year-old scientist in the world outside Gaza took a horrific turn after he lost his 11-year-old son in an Israeli air strike in 2008. He knew he would eventually have to come home to Gaza.

In late December 2008, he was sitting in his US office at NASA in Hampton, Virginia when he heard about the bombs targeting eastern Khan Younis, and moments later he learned that his family home had been hit in an Israeli airstrike. After approximately 10 hours, incommunicado with his family, he knew his son, Ibrahim, had died.

“There was always a debate inside my head, tossing around the thought that the missile which hit my son could have been developed by colleagues I lived and worked with on a daily basis. I couldn’t reconcile that thought,” he says.

Among Palestinians, Baraka is seen as a hero who, in conscience, left behind a prestigious job and, like the missile that killed his son, headed to Gaza, back to his homeland.

“My son was killed here,” he points out, as he walks around the house which is now surrounded by trees. All the dreams to bring his family to the US, faded away with Ibrahim’s death.

Professor Baraka is the only Palestinian from Gaza who has worked for NASA, although since the 1960s a significant number of Palestinians have worked for the space agency. It is an achievement that has been recognised with his nomination for UNESCO's first Middle East chairmanship, among other awards.

He passionately believes that Gazans should again look to the stars and learn to remaster the science of space, as he explains the long ancient history of astronomy and its historical place in the Arab world.

“If you look at the catalogues and analogs of astronomy, you will find the most prominent names are Arabic,” he says with pride about his ancient ancestors’ focus on the ancient light of the stars. “Our history is up their too.”

After years of working abroad, and finishing his work for NASA, with all of the wonderful space facilities available to him, he came home and planned to open Gaza’s first university astronomy department. However, one stumbling block was obtaining a telescope in the Gaza Strip.

“Gaza is like a concentration camp, closed off from the rest of the world and the global economy. In the USA, or UK, you can purchase a telescope from any Optics shop and simply take it home… but in blockaded Gaza, enthusiastic, intelligent students, are deprived of those rights of choice,” he says.

But Baraka has not given up on his goal of bringing space science and the universe back into local schools and university classrooms. A breakthrough came in February 2010 when, "after four months of contacts with diplomats who are friends, we were able to get our first educational telescope through which to view the stars, planets and near galaxies,” he says with a broad smile. “A telescope is an important tool through which to feel freedom and sense mobility from our tiny place on the ground.” There are now seven telescopes in Gaza.

His passionate drive to establish an astronomy department in Gaza has received enthusiasm and interest from many people.

The first night he turned the telescope to the skies, hundreds of people - including mothers and their children - gathered around, eager to examine the stars and planets, using Gaza’s first telescope.

“I want Gaza to contribute to the knowledge production of global science,” he says, as children gaze at red Jupiter, the Milky Way, hazy Andromeda and Cassiopeia, eyes wide with amazement and curiosity.

The public further appreciated the importance of the work of Professor Baraka after his profile and vision was raised when he became UNESCO’s first Middle East chair-holder.

“Now I need to build a new infrastructure for young scientists - men and women - who want to contribute to making a difference in human civilization,” he says. “It is work, devotion, management and leadership that makes the difference,” he adds, between filing his work to his colleagues in France.

He still feels the deep pain from losing his son, the event which changed his horizons and ultimately brought him home to Gaza, leaving NASA and its technological treasures behind.

“I never forget my son. He is there among the stars, and I have enough strength to bear my loss and carry my soul forward into exploring my research.”

Part of his decision, in coming back, was to honour the school where his child, Ibrahim, was a student before the missile took his life.

“I gathered my son's former classmates together and, with the help of the telescope, took them closer to the moon. I want them to feel relief among the stars and heavens above, and to scan the skies freely,” he adds as he hugs the children and they talk about his son, recounting their favorite memories of him.

Baraka wants the children to see the beauty of the skies, beyond the fear of Israeli F16s, surveillance drones and armed Apache helicopters.

“If you truly believe that you are living in the land of prophets, then you have to be a messenger,” he says. “I have my message, and that is to establish the educational infrastructure for an astronomy in Palestine.”

“I want to teach these children peace and love - nothing else,” he says. “We must see past the drones, and reach for the stars.” 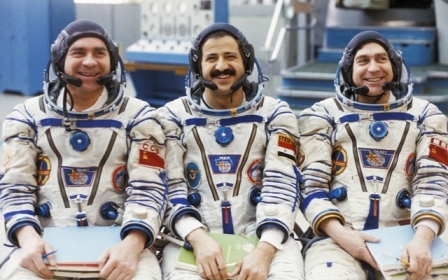 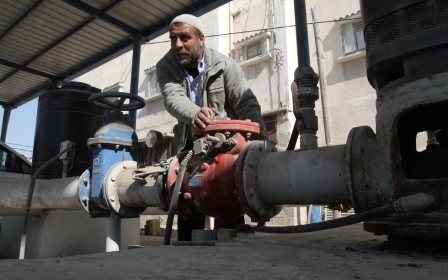