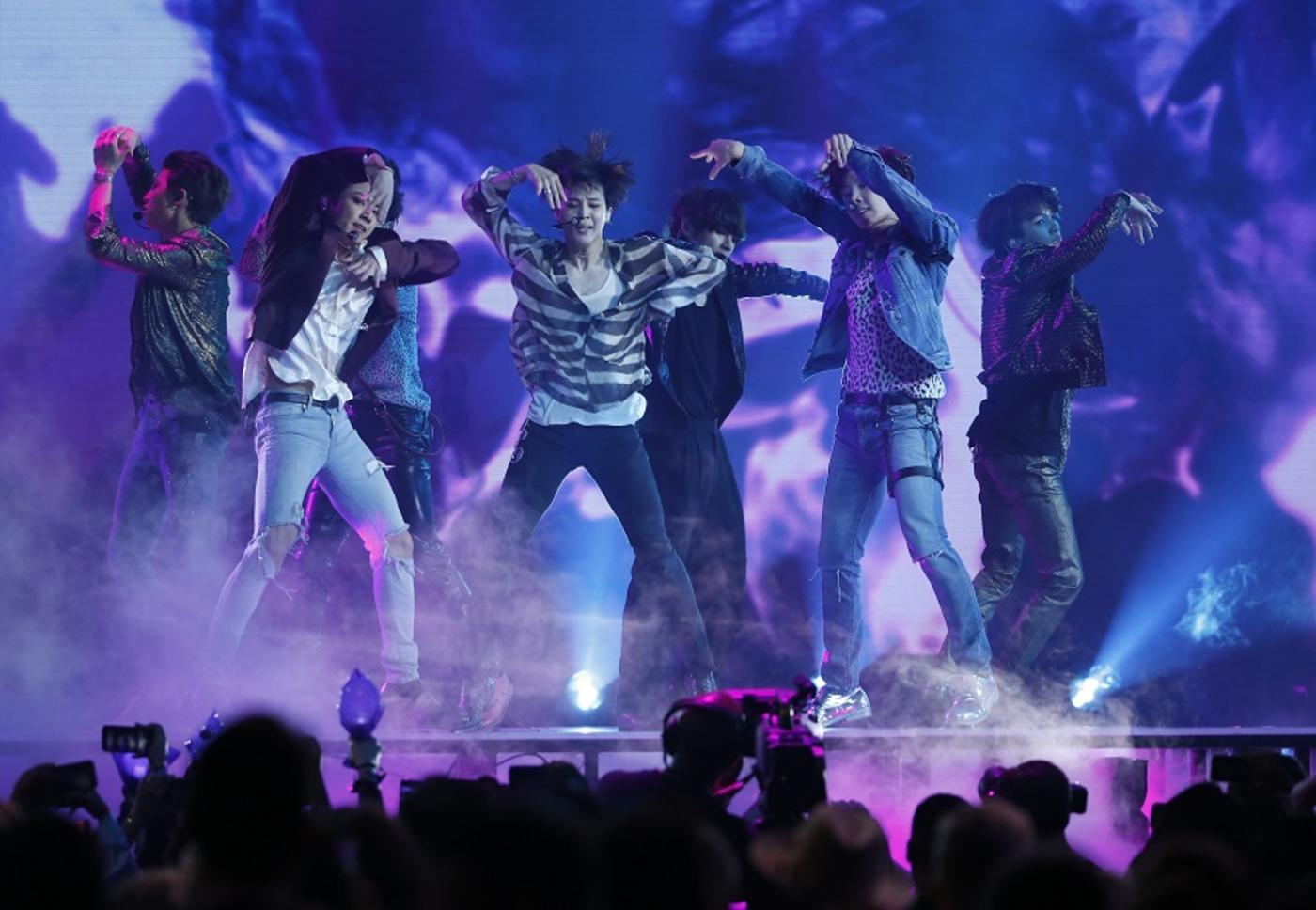 BTS performs "Fake Love" at the 2018 Billboard Music Awards in Las Vegas, Nevada, US, on 5 May 2018 (Reuters/Mario Anzuoni)
By
Victoria Yan

BEIRUT – A group of teenagers take centre stage in a Beirut hotel conference room, dancing to the choreography of Gashina, a hit song by South Korean pop star Sunmi.

“When you get into K-pop, you’re basically immersed into another world,” Rany Jaber says laughing.

Swaying side to side, the 17-year-old is surrounded by dozens of other enthusiasts who are dancing in sync to other hits such as Fake Love by Korean boy band BTS.

This might be more difficult to do in public on a normal day, but on Saturday, Jaber is safe.

For five hours, he and fellow fans indulge in all things Korean pop. Tired of American mainstream pop, a niche group of Lebanon’s youth has chosen to jump on the “K-pop” wave - a subculture with a global fandom.

When you get into K-pop, you’re basically immersed into another world

Together, they exchange dance tips and compete in trivia games, showing off the depths of their knowledge of the K-pop world at the informal convention for Lebanon’s young K-pop fans.

The 13th Lebanese K-poppers tri-annual meeting is a melting pot of people from around the country between the ages of 14 and 24.

If not connected by anything else, they are bonded by their esoteric interest, creating a space to fully engage in a subculture little-known across Lebanon.

The scene is as much a cultural exchange as it is a venue of self-expression. In one corner, Jongin Park, a Korean national who has long lived in Lebanon, is selling homemade Kimchi that he made with his wife. The food is a traditional Korean side dish made with fermented vegetables.

Next to him is a group of young girls mimicking dance moves as they laugh and wield their bodies in unconventional ways.

The growing popularity of the K-pop phenomena can directly be attributed to Hallyu, literally translating to “flow of Korea,” or more colloquially – the Korean Wave.

American culture is based on a lot of this swag or underground attitude. K-pop takes a bit from that but it also has so many roots elsewhere

In the early 1990s, Korean pop music saw a growing fandom – and economic revenue – in neighbouring Japan and China. Quickly, the South Korean government moved to escape an economic slump by feeding the success of its new future export, K-pop.

By 2016, it had grown into a nearly $5bn industry, extending way beyond music and into television with its own reality shows. Most notable is K-pop Star, a televised competition to find South Korea’s next K-pop star that ran from 2011 to 2017.

The fan base expanded beyond Asia across the world with songs of popular groups like BTS being translated into English. Songs have climbed the US Billboard Top 100 as well as the UK Top 75 Chart.

The Middle East was certainly not immune to the music's bubbly over-the-top visuals, synchronised dancing and western beats mixing RnB, rap, rock, reggae, Latin and pop, with a distinct Korean flair. In the past year alone, over four K-pop boy bands and girl bands have put on shows in Dubai.

I started listening to K-pop in 2012. I was so into YouTube at the time

“I got into K-pop when I was living in Kuwait,” 20-year-old Yara Akar, an organiser of the Lebanese K-poppers meeting tells Middle East Eye.

“They used to play Korean dramas on [Saudi Arabia’s private channel] MBC4 because they were so popular, but everything was dubbed in Arabic which was kind of weird.”

While K-pop has not taken over Lebanon, many other participants in Saturday’s meeting agree they had caught onto the subculture because of friends and, of course, the internet.

“I started listening to K-pop in 2012. I was so into YouTube at the time. I watched so many videos that eventually a random K-pop video popped up,” 21-year-old Malak Hazime, another organiser, recalls.

“I was basically just hooked after that.”

In 2012, several veteran members of Lebanese K-poppers were introduced to a Whatsapp group between friends and acquaintances. Linked by their interest in the Korean phenomena, the small group held get-togethers at Dunkin’ Donuts in Beirut’s Hamra neighbourhood.

They increased in numbers over the years and began to outgrow their venue.

According to 22-year-old Rida Farhat, one of the organisers, they were kicked out in 2015.

“Yeah, we definitely were too big of a group, like 20 people," he laughed.

"We were too noisy and the space was tight so they told us to leave. This is how we ended up at this hotel.”

Other cultures might perceive [it] as childish, but it just opens the different attitudes and emotions we can express

Since then, they have run get-togethers about three times a year at the Golden Tulip Serenada hotel in Beirut's Hamra. Each meeting averages about 50 to 60 participants in addition to the five organisers.

While not all were present during this meeting, many regularly post videos and memes of their favourite “idols,” catalysing discussion on the latest gossip in the K-pop world.

Completely self-run, Lebanese K-poppers have no affiliation with any Korean cultural associations, nor do they receive regular funding from any institution.

“We reached out to the Korean embassy in the past. They support us, but they don’t have the capacity to really finance us,” Farhat says.

“Anyways, we like keeping the group autonomous,” he adds.

With his honey-orange hair and dramatic facial expressions, Jaber attempts to emulate artists he and other fellow K-pop fans refer to as “idols,” such as Xiumin, a member of EXO bans.

“American pop is so simple, it’s so generic. But in K-pop, there are so many concepts, attitudes, visuals; it takes from American pop, but it has everything. When I dance K-pop, I can be everything from sexy, very cute to something very masculine – swaggy.”

Because of the diversity in personas within the K-pop world, Jaber, who identifies as bisexual, explains that engaging in the subculture has allowed him to grow more comfortable in his own skin.

In K-pop, you can be straight and also dance like a girl. Men can be very feminine, men can wear makeup, and it’s accepted

“K-pop has allowed me to become much more confident about myself in singing and dancing. I also find confidence with my attitude and with my sexuality,” he says.

“In K-pop, you can be straight and also dance like a girl. Men can be very feminine, men can wear makeup, and it’s accepted. Here, [in Lebanon] you’re automatically perceived as gay in a derogatory way if you act that way.”

Twenty-year-old Maroon Sayah, who identifies as queer, agrees that the blurring of gender roles in K-pop allows for further self-expression. Also, he adds, K-pop’s use of pop culture around the world gives it an edge.

“American culture is based on a lot of this swag or underground attitude. K-pop takes a bit from that but it also has so many roots elsewhere,” he says, referring to the music genre’s use of jazz, Latin music and nearly everything in between.

“There is also a very kawaii or cute aspect of K-pop,” Sayah continues, referencing the Japanese term for cute.

“Other cultures might perceive [it] as childish, but it just opens the different attitudes and emotions we can express.”

Attempting to summarise the phenomena briefly, 24-year-old Imad al-Fil, another veteran of the group, defines K-pop as a “complex bundle of music, choreography, dance, fashion, lifestyles and attitudes”.

“The whole world of K-pop is a bit like a reality TV show,” al-Fil explains.

“The ‘idols’ are another genre of human beings. In public they never show their authentic lives, instead, they’re characters of a different story. The whole thing is a bit of a fantasy, which is symbolised through the hairstyles, the outfit changes, and the music videos being very fictional and fantastical.”

Akar says that despite their lack of authenticity, they make their fans happy, which is sufficient for him.

“What they give me and what they do to make the fans happy is good enough,” Akar says.

“I don’t have to know who they really are, or what they actually do. What's more important is all the effort they put into playing these personalities in their concerts, and TV shows... all of this effort they put making their fandom happy." 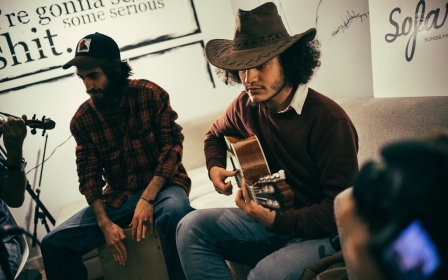 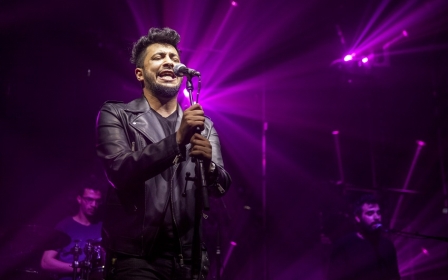