From Sarajevo to Syria: War through a child’s eyes 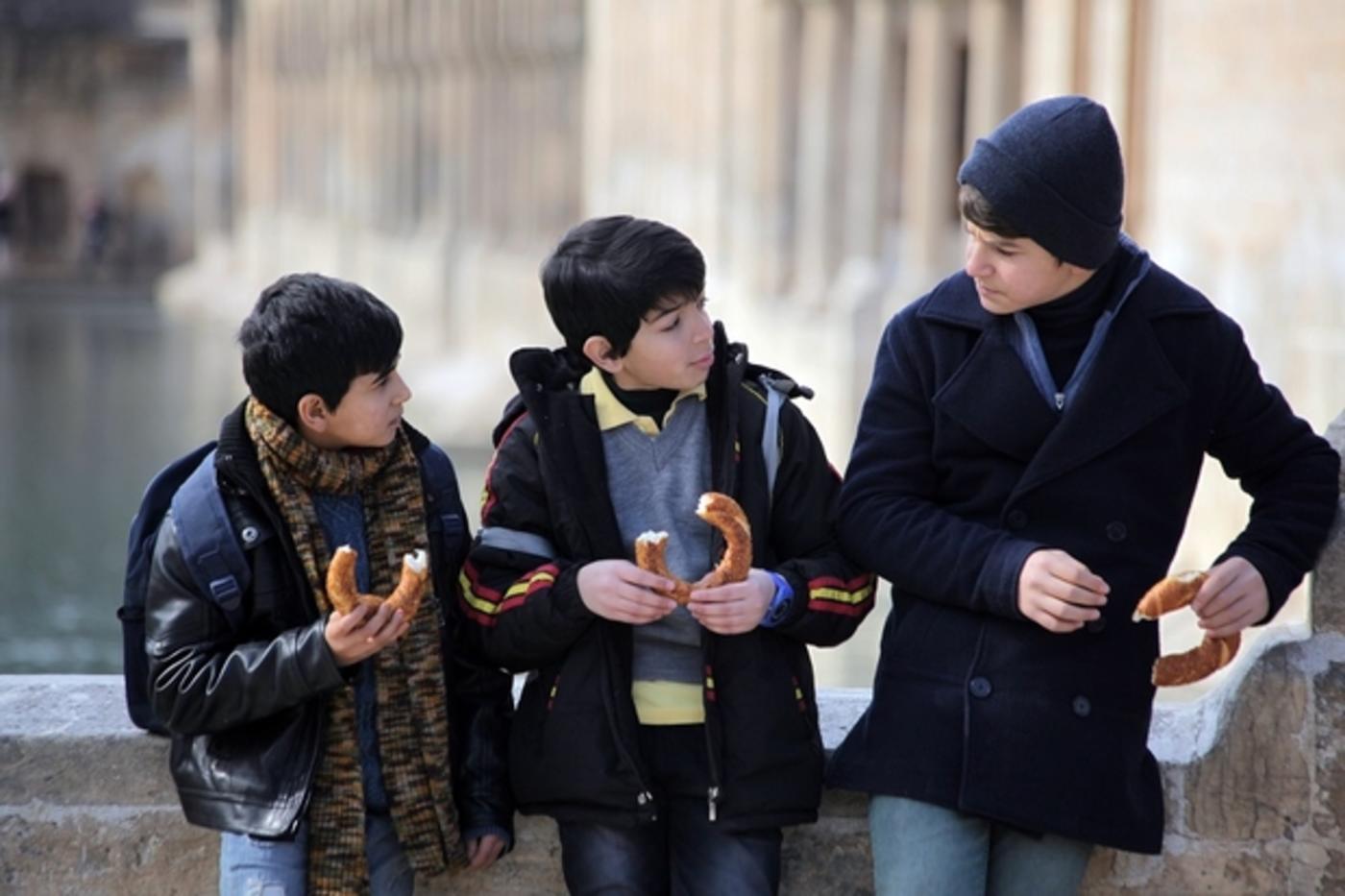 The plight of the characters played by actors (L-R) Ahmed Husroom, Motaz Faez Basha and Isa Demlakhi in the film was fictional yet very close to the reality of the lives they had in Syria (Photo courtesy of Adis Dapo)
By
Joseph Ataman

ISTANBUL, Turkey - For the three young actors that portray the Syrian boys in Never Leave Me, the latest film from Bosnian director Aida Begic, the movie is far from fictional.

The film charts the daily traumas, tragedies and triumphs of three Syrian refugees in Turkey, and the movie’s main roles were played by three boys who fled Syria with their families, escaping the violence that has engulfed their homeland.

Filmed and directed by Bosnians who had lived through the Balkan wars as children, the film - which premiered at last October’s Antalya Film Festival in Turkey - thrusts the audience into a child’s experience as a refugee.

The story of the orphans told in Never Leave Me is frighteningly common. According to the United Nations, as many as one million children have lost a parent to the conflict in Syria, which is now nearing its seventh year.

In the film, the actors are not merely trying to reproduce realism but recall experiences close to their own.

I wanted them to see that us who went through the same thing 20 years ago, now are people who have jobs, that a future is possible

Rather than pure fiction, the film’s screenplay is a composite of the stories of hundreds of Syrians that the director Begic spent time with over the course of a year.

After spending time in several refugee camps along the Turkish-Syrian border and even living for a while with a refugee family, Begic sought to win the trust of the children at the heart of her film.

From the stories shared with her by the Syrians she met, Begic knitted together a narrative around three young orphans in Sanliurfa, a province in southeast Turkey, that is home to nearly half a million registered Syrian refugees.

She organised acting and play workshops for close to 500 Syrian children in camps and towns across three Turkish provinces, whittling down this cohort to a handful of young boys who filled the main roles, playing characters with their real names, and in some cases re-enacting their own experiences as refugees.

Interweaving events from the actors' own lives, Begic was able to construct a story whose realism verges on the autobiographical.

“A lot of it is based on their real-life stories. The actual story is of course fiction but it uses these elements in creating a narrative,” Begic told Middle East Eye.

We were those kids 20 years ago

The result is a “fiction inspired by reality” and something akin to a collective experience of these refugees, she said.

“This role that I played was like my life in Syria and like many people’s life in Syria, so it felt like I wasn’t playing a role but doing the same thing I was doing in Syria during the war,” said 15-year-old Isa Demlakhi, who plays Isa, the film’s protagonist.

While most directors fret over capturing reality, for Begic the challenge was completely different.

With her young lead actors recalling and re-enacting situations that threatened to recall past traumas, Begic was worried about producing emotions that were too close to reality and how this might affect the young Syrians. That's why she says she ensured that counselling was available for the boys during filming and worked according to their comfort levels.

Children who have lived through conflict are particularly vulnerable to long-term trauma. International aid organisations have warned of irreversible damage to an entire generation of Syrian children such as Isa. According to the Lancet, one in three children is suffering from post-traumatic stress disorder.

Adis Dapo, the Bosnian producer of Never Leave Me, said the film’s realism has been a powerful selling point and a potent boost for its goal of shining a light on the plight of Syria’s youth.

“We didn’t really want to go into the politics - it’s really just about the kids and the experience of being a refugee,” Dapo added.

Isa, the lead actor, said that only two scenes blackened an otherwise fulfilling experience. One, in which a bomb strikes the car his character is travelling in, killing his father, was particularly difficult. Back in Syria, an air strike on his hometown of Aleppo killed Isa’s father in 2014 and buried shrapnel in his leg, leaving him with a permanent limp.

However, elements of kindness also run through the film, as after the bombing Isa's character was cared for by a group of Turkish women at an orphanage. In real life, Isa was treated in a Turkish hospital as well, so the scene was very close to home.

The film was also at times a painful reminder of the difficulties of daily life for Syrians in Turkey. In one scene, Isa’s character borrows money from a local Turkish gangster who then beats him, acting out a violent scene that is all too familiar to Isa. “This is how Turks treat Syrians, they hit children,” he said.

Filming the movie proved to be a transformational process for many of the children involved. Isa said the film took him away from the depression that marks his daily life as a refugee and allowed him to dream again. He now has his sights set on becoming a professional actor.

Producer Dapo said the film crew really wanted to put this return to hope front and centre in the film. “It’s about how you can go on after such a tragic event in your life,” he said.

A lot of the kids we met, they’re traumatised and couldn’t really see a future for themselves

“A lot of the kids we met, they’re traumatised and couldn’t really see a future for themselves, so in a way this process was as much of a healing process as possible as well,” he added.

For the movie’s director, who lived through the siege of Sarajevo as a child, this kind of therapy was an essential part of the project. For over three and a half years (1992 to 1995/96), Bosnian Serb forces besieged the largely Bosnian Muslim city of Sarajevo, blockading the capital city and killing more than 10,000 people, who were living under daily artillery and sniper fire for much of it.

“I know how art is essential for people during the war because for us during the siege we didn’t have food, water, electricity, and coal for heating, but we still made theatre. We made movies because this is what brings you back your dignity,” Begic said. “Since we are artists, I think we should bring joy to people’s lives,” she added.

Like Begic, some of the film crew had survived the conflict in Bosnia, which she said was a source of hope for the child actors.

“I wanted them to see that us who went through the same thing 20 years ago, now are people who have jobs, that a future is possible,” she said.

Members of the crew struck upon an immediate affinity with the child actors, based on their shared experiences. Begic highlighted the story of one crew member whose father had disappeared during the conflict in Bosnia. One of the Syrian children involved in the production had gone through a similar tragedy and the two formed an immediate connection.

For us during the siege we didn’t have food, water, electricity, and coal for heating, but we still made theatre. We made movies

“The crew were people who could connect with the Syrian children because some of us were refugees;,some of us grew up under the siege, some of us had family members who were lost or wounded,” Begic said. “In that sense it was a very unique process.”

Yet the movie project also proved to be therapeutic for those behind the camera.

“We were those kids 20 years ago,” Begic said, adding that working with the Syrian boys during the film had been a “flashback” for many of the crew.

Working along the Syrian border was the closest Begic had been to war for more than 20 years, reawakening memories she had hoped to forget.

“I thought I had overcome the traumas and stress and fear, but I realised it’s very deep and very present. For us it was kind of flashback.”

“It can be kind of a selfish thing - you think that no one goes through the same thing as you did,” Begic said, but making the movie “woke us up to be more aware and engaged in other people’s suffering”. 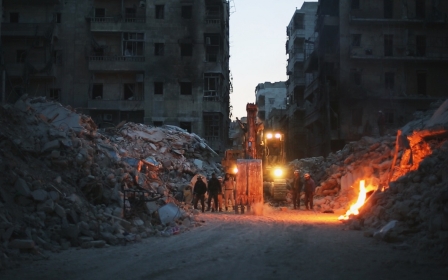 Syria War
'Last Men In Aleppo': 'One day this film will be a document to punish war criminals' 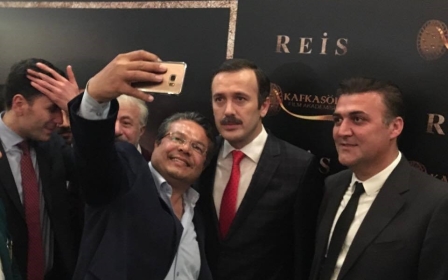 Culture
Being Erdogan: Actor says biopic of president is not AKP propaganda