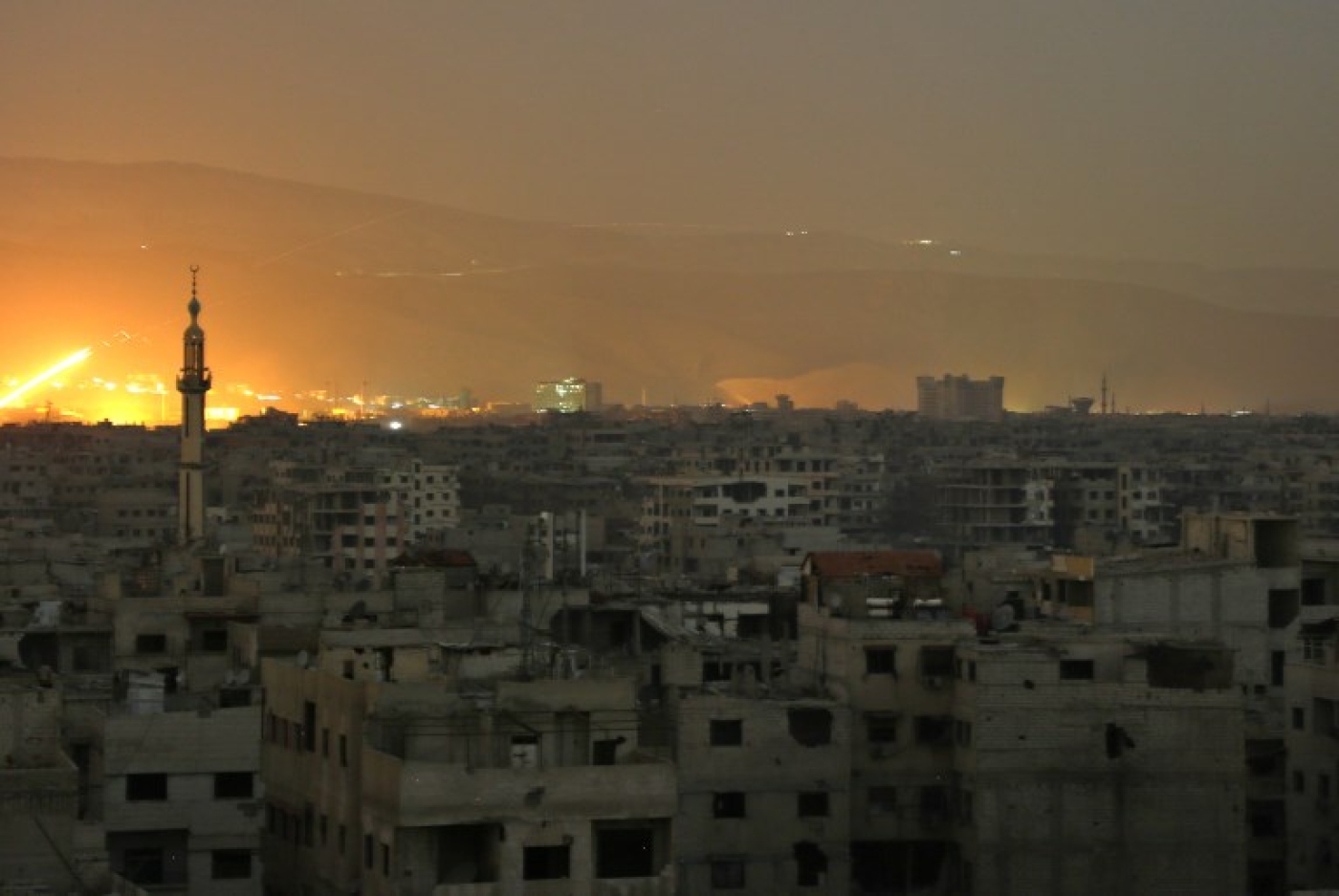 Activists and locals raised alarm on Monday, saying more than 30,000 people under siege in the town of Harasta in Eastern Ghouta may be facing a "genocide" after the Syrian army split the rebel enclave on Sunday.

“We are particularly worried about the situation in Harasta. About 5,500 families are under siege with no food or supplies,” said Syrian activist Ibrahim al-Fawal.

“All telephone lines have been cut and we simply haven’t heard anything from a single one of them since Sunday,” he told Middle East Eye.

The warning comes as the Syrian Observatory for Human Rights said on Monday that about 511,000 people had been killed since the Syrian war began seven years ago.

More than 1,100 civilians have been killed in the onslaught on the biggest rebel stronghold near Damascus since it began three weeks ago with a withering bombardment, said the Syrian Observatory for Human Rights.

It said there was intense fighting on several fronts accompanied by a government artillery barrage, continuous air raids and attacks by helicopters.

The advance on Mudeira, after the capture of the neighbouring town of Misraba on Saturday, has driven a wedge deep inside rebel territory, leaving the major towns of Douma and Harasta cut off.

Rebel groups in Eastern Ghouta have vowed they will fight on. A statement issued by Free Syrian Army factions there late on Saturday said they had taken a decision not to accept a surrender and negotiated withdrawal.

We may be hearing of mass killings in the town within the next 24 hours. I’m afraid that the more than 5,500 families are facing a potential genocide

Zaher Hassoun, whose family and friends are all still inside Harasta, told MEE: “The last I heard from my family and friends in Harasta was Saturday night, just before the government forces and pro-Assad militia surrounded the town.

“We may be hearing of mass killings in the town within the next 24 hours. I’m afraid that the more than 5,500 families are facing a potential genocide,” added Hassoun.

"We call on the international community to act quickly before something irreversible happens in Harasta," said Hassoun.

According to activists in Eastern Ghouta, the families under siege in Harasta include locals as well as hundreds of internally displaced families who were forced to leave their homes in the towns of Mudeira and Misraba as government forces captured those areas over the weekend. 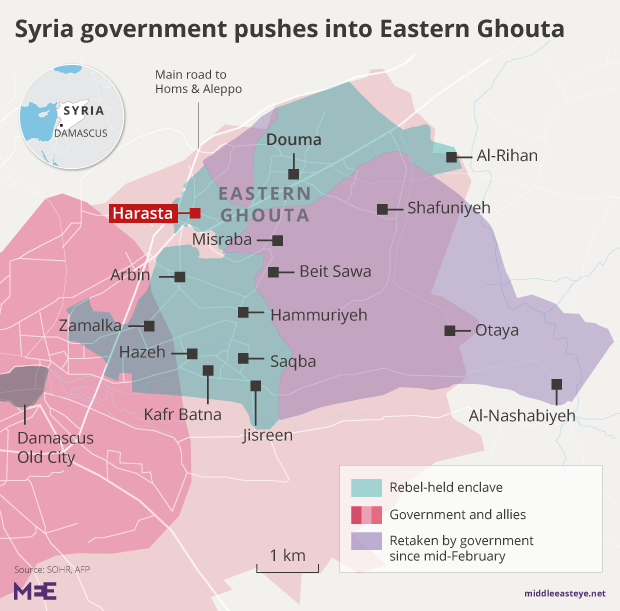 As the Syrian army pushes deeper into Eastern Ghouta under cover of a hammering bombardment, the 400,000 civilians the United Nations says live in the enclave have been crowded in dark basements to cower from the ceaseless bombing.

Syrian government forces have taken farmland and marched into towns, squeezing the pocket in the eastern suburbs of Damascus. Thousands of families fled their homes and moved deeper into the enclave, residents say. The cellars were already packed before that.

Reports on Sunday alleged that dozens of civilians had managed to flee Eastern Ghouta through a humanitarian corridor.

But sources on the ground disputed these claims, saying that no civilians have attempted to leave the rebel enclave but instead remain holed up in underground cellars.

The people in Harasta have very few options. They can either remain and die under the air strikes or they can hand themselves over to government forces and face mass arrests, torture and killings

“Civilians across Eastern Ghouta are too afraid to leave the cellars and do not know anything about what is happening over ground other than through the sound of bombs that have continued to pound the area for weeks,” said Fawal.

According to Hassoun, the situation in Harasta is becoming increasingly difficult as hundreds of families are facing one of two options: remaining in their homes and underground refuges as air strikes target them or handing themselves over to government forces.

“The people in Harasta have very few options. They can either remain and die under the air strikes or they can hand themselves over to government forces and face mass arrests, torture and killings,” said Hassoun.

Dozens of barrel bombs and air strikes have targeted the town since Sunday morning. The number of victims injured or dead are unknown.

According to Hassoun, some former residents of Harasta - who had left the town five years ago - are trying to negotiate with the Assad government on behalf of those still in the town so that they might be allowed to leave the enclave safely.

No deal has been reached however, he said.

On 26 February, Russia, which backs the Syrian government, offered rebels safe passage out while ordering a daily "humanitarian pause" within the enclave and saying it was also guaranteeing civilians safe passage if they wanted to flee.

Evacuations have taken place in other parts of Syria, where fighters and civilians have withdrawn to rebel territory near the Turkish border.

Such deals, in which the choice is usually to accept state rule or leave, have helped Assad's military claw back control of major cities, with support from Russia and Iran.

People in Eastern Ghouta say they dread a similar fate.

The Observatory said on Monday that about 511,000 people had been killed since the Syrian war began.

The monitor, which tracks death tolls using a network of contacts inside Syria, said about 85 percent of the dead had been killed by government forces and their allies.