As 10 planes full of Algerians arrive in Cairo for tournament final, many head straight for Tahrir Square While Algerian fans in Cairo prepared for game, people in Algiers take to streets (AFP)
By
MEE correspondent
in
Cairo

As far as football goes, for Algerian fans, Egypt's national team is rival number one.

Over the years, the two teams have clashed several times, leading to violent confrontations between players and fans, on and off the pitch.

But among the 10 chartered planes filled with Algerians that arrived in Cairo this week for tonight's Africa Cup of Nations final, in which their team will play Senegal, the mood was less about rivalry - and more revolutionary.

It was 23-year-old Mehdi Omar's first time out of Algeria since months of protest earlier this year toppled longtime president Abdelaziz Bouteflika. What was his first stop after the football pitch? Tahrir Square.

"The first time I wanted to visit after attending the matches, of course, was Tahrir Square," said the computer science student. "In Algeria, we are still fresh from protesting and demonstrating, so we relate to what happened to Egypt."

On Thursday, Omar and dozens of other Algerian fans chanted from the square at the centre of the 2011 uprisings that brought down longtime Egyptian leader Hosni Mubarak.

They chanted for their team, for Palestine and for Egyptian football star Mohammed Aboutrika.

Friday night's game, fans told MEE, has much more meaning this year because of the changes unfolding in their country after the fall of Bouteflika.

"I hope that political forces will be united and set aside the differences, so we are not controlled again by the army," Omar said.

On the flight to Egypt, Algerians of various political affiliations were united in their excitement to cheer on their team, added Mossab, Omar's friend.

"I hope this tournament will be a chance for people to continue their dreams for a better Algeria," said the 30-year-old teacher.

After Tahrir, Mehdi and Mossab met another crowd of Algerian fans also roaming the old streets of downtown Cairo, and took a rest by a street vendor selling grilled corn.

"God willing, Algeria will bring the cup home. But it should be for the people, not for the regime," said Mossab, as the circle of fans nodded in agreement while gnawing on their corn.

"The normal working people like us who save money to go after their passion are the ones who deserve to take credit, not the Football Federation or the Sports Ministry." But along with reflection on the political developments at home, there was also a lot of fanboy love for Aboutrika.

For years, Aboutrika captained the Egyptian team at international competitions, gaining massive support from Arab fans before he was placed along with 1,537 others on a state terrorism list in 2017.

He appealed the decision and last year the Egyptian court reversed it. Still, Aboutrika, who is now retired and lives in exile in Qatar, would face arrest if he were to return to Egypt.

On Wednesday, Mehdi, Mossab, and their friend Abdel Khaliq Farouq piled into a taxi and headed for Nahia - and the home of Aboutrika's mother.

As the three pulled up, another group of fans was just leaving the home. Mehdi said they took photos with Aboutrika's mother and told her how loved he was in Algeria - even if he gives them sleepless nights when Algeria plays Egypt.

Like Egyptian fans, Algerian fans cheer for Aboutrika during games at minute 22, his longtime jersey number, and also at minutes 20 and 74 - to observe the Ahly and Zamalek martyrs.

After a league game in the city of Port Said in February 2012, hundreds of fans of Port Said-based al-Masry attacked fans of Cairo side al-Ahly with sticks, knives and swords, killing 74; al-Ahly had unexpectedly won 3-1.

And in February 2015, 22 Zamalek fans were killed when a stampede broke out after riot police fired tear gas at fans who were crammed between metal barriers during a league match.

But despite the support they showed on Friday, the Algerians said their historical animosity with Egyptian fans is still burning, even if it is a bit under wraps.

The rivalry began during a qualifier for the 1990 World Cup when Algeria – which had qualified for the tournament in 1982 and 1986 - was trounced by the Egyptian squad.

In 2001, when the teams faced each other in northeast Algeria at the African Cup of Nations, violence broke out on and off the field.

And eight years later, in 2009, Algeria knocked out Egypt during the qualifying rounds ahead of the World Cup. After the game, clashes between the fans escalated, leading to diplomatic tensions between the two countries - fuelled by media outlets and politicians.

"Lots of people harass us either verbally or by scamming us and then they remind us of the 2009 game," said Saed Bou Saad, an Algerian vet.

Saed said that he met lots of Egyptians in the stadium who cheer for any team that plays Algeria. "Someone even told me that they [Egyptians] would be happy to see any team win but not Algeria," he said.

Last Sunday, when Algeria played Nigeria, Riyad Salama, an Algerian who works as a truck driver in Saudi Arabia, watched from the stands as Egyptian fans cheered on Nigeria and fights broke out with Algerians.

"I was very disappointed to hear that they would cheer for a non-Arab country," said Salama.

Several Algerian fans sustained minor injuries and some were detained until the end of the match. Some Algerian fans said the Egyptian police attacked them.

"After Nigeria scored, the Egyptian fans started throwing water bottles so [we] threw them back and later the police attacked us and dragged us out of the stadium," said Ben, an Algerian fan who declined to give MEE his last name for security concerns.

He and 22 other fans were then taken to a police station in Cairo.

"We spent a night of insults with no food or water, and then a representative from the embassy came and told us that the best option is to agree to be deported," he said.

"We were locked in the same cells with thieves and thugs who intimidated us and stole our money and phones." 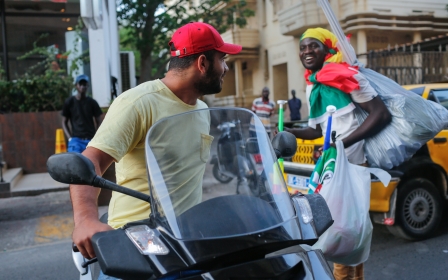