The role of Islamist parties, boycotts and predictions of a historically low turnout. Here's what you need to know about the vote for the next Algerian parliament 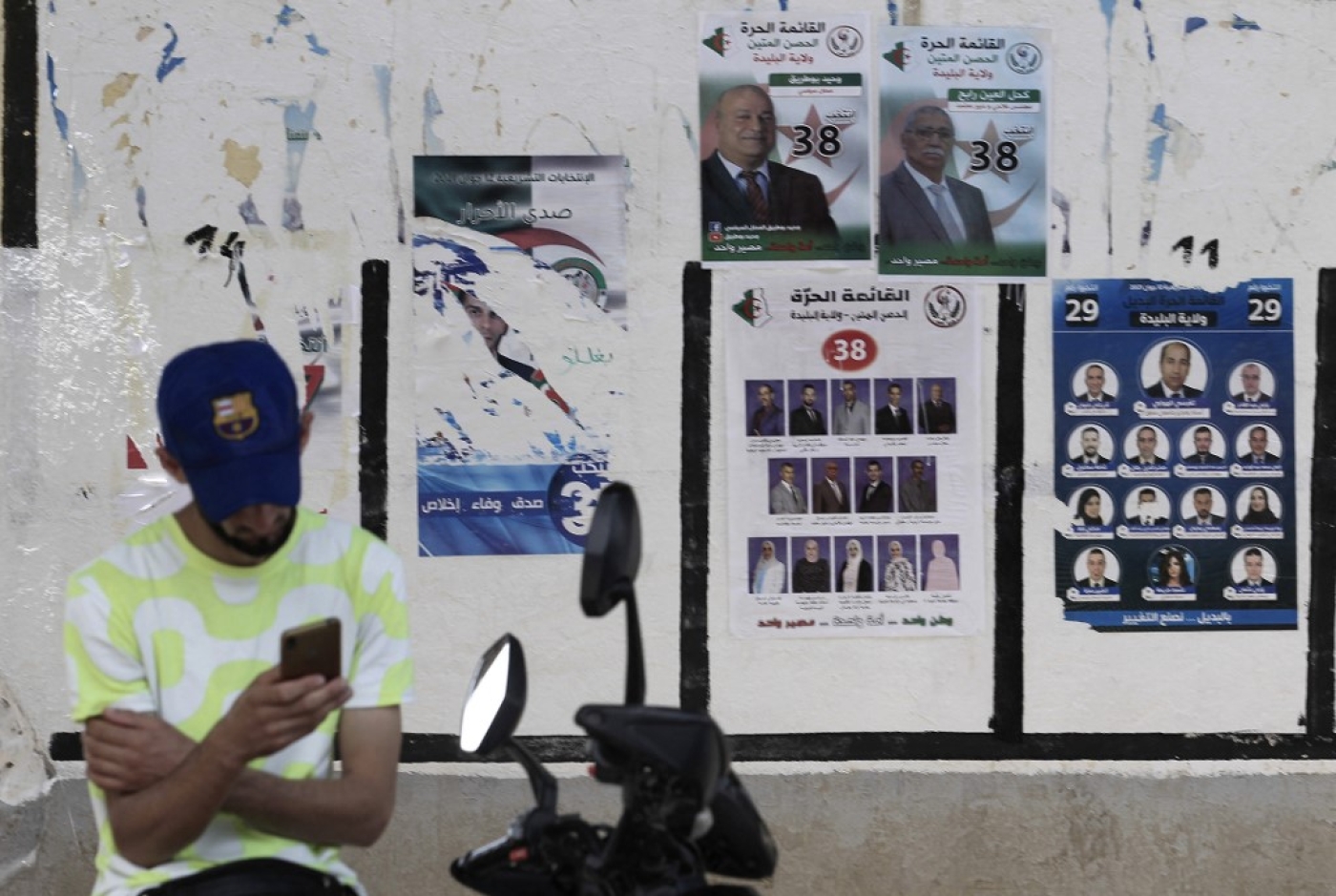 An Algerian looks at his phone in front of election posters, 31 May 2021 (AFP)
By
Malek Bachir
in
Algiers

Algerians go to the polls on Saturday 12 June to vote in legislative elections. Here's what you need to know about the vote.

Can the elections be described as free and fair?

Yes, in the sense that the candidates are free. There are a large number of hopeful candidates (in excess of 2,200), the majority of whom are listed as independents. Meanwhile the significant participation of young people (under the new electoral law, half the candidates on the lists must be under 40) will be nothing if not a shake-up of the parliamentary scene.

That said, an observer of the political scene, who prefers to remain anonymous, explained to Middle East Eye that despite this unique situation, “the ‘executive power’ isn’t taking any risks”, referring to President Abdelmadjid Tebboune's government.

“After the presidential elections [of December 2019] and the referendum on the review of the constitution [in November 2020], the forthcoming legislative elections are the third phase of the agenda set by the authorities, designed to show that it is holding all the cards in this game and that all the players are under its control,” the observer said.

Will Algerians go out and vote?

In view of the poor voter turnout for the referendum on changes to the constitution in November, which saw only 23.7 percent of eligible Algerians vote, experts are already expecting a historically low turnout.

However, these elections may see higher participation. “Algerians could very well turn out in numbers greater than expected, because they have greater proximity to MPs. However, they harbour few illusions about the nature of our parliament, which operates as little more than a rubber stamp,” said a government official, who requested anonymity.

“Given the political scene, a turnout rate of 10-15 percent would already be huge,” comments an Algerian journalist. “Radical Algerians will go out to vote, as they always have done. People will vote either because they know the candidate and support their network - or out of fear of the government.”

Will the Islamists win a parliamentary majority?

“In Algeria, there are no opinion polls,” Algerian political scientist Cherif Dris tells MEE. “But there are two things we can already deduce: that the new parliament will be hybrid, without a hegemonic party, and that the Islamic conservatives will be very much present, though not in a monolithic bloc."

They could end up being spearheaded by two parties, Dris adds: the Movement of Society for Peace (MSP, Muslim Brotherhood affiliate) and El Bina (MSP dissenters).

This emergence of an Islamist front can be broadly explained by two phenomena.

Firstly, the implosion of the parties of the former presidential alliance (FLN, RND, MPA, TAJ), which crumbled when protests forced Abdelaziz Bouteflika to step down as president in April 2019.

Some figures from those parties remain. “Their names figure on some independent lists, but they no longer have a solid power base within the government,” says an ex-FLN official.

Second is the absence of the veteran heavyweights of the opposition, classified as “democratic secularists" (mostly belonging to the Socialist Forces Front (FFS), Rally for Culture and Democracy (RCD) and Workers Party (PT), who have chosen to boycott the elections, stating that they are neither free and fair nor transparent.

The FFS and other parties have denounced the increasing repression in the country. For the past three weeks, the weekly Hirak protests - the vast popular movement that led to Bouteflika's resignation - have been banned. According to the National Committee for the Liberation of Detainees (CNLD), more than 200 people have been arrested while protesting or attempting to protest.

“The elections offer no solution to the multi-dimensional crisis in which the country is mired,” the FFS said.

Questioned on the potential for seeing Islamists take the parliament, Tebboune told weekly magazine Le Point: “Did political Islam block the development of countries such as Turkey, Tunisia, Egypt? No. This political Islam [as opposed to the insurrectional Islam that tipped Algeria into a civil war in the 90s] doesn’t worry me, because the laws of the republic will be applied, to the letter.”

A government official told MEE they predict “a strong presence of Islamists with a dozen seats for the independents and a handful of seats for the ex-FLNs and Jil Jadid," the latter referring to a democratic party that chose to participate in the elections.

Can parliament push to share power with the executive?

The Algerian political system is "presidential", she explains - in other words, the head of state centralises numerous functions and powers.

Dris similarly expects little movement on that front. “A new parliament won’t change much,” he says.

“The new constitution safeguards the executive power, in part represented by the president of the republic. I don’t foresee any major changes: the new parliament won’t have the wherewithal to push back against ‘le pouvoir’,” he adds, using the Algerian term for the country's ruling oligarchs.

Regardless of the forces keeping parliament at bay, its splintered makeup hinders any chance of creating pressure. "It will be impossible for such a fragmented parliament to establish a united vision or push to share any power with the executive,” says the leader of a democratic party.

Under the new constitution, unless the president's party wins a majority (Tebboune has no party), he must appoint a prime minister and ask him to form a government depending on whatever majority emerges.

On paper, if the Islamist MSP emerges with the most seats, Abderrazak Makri, who has led the party since 2013 and described it as the "premier political force in the nation", could naturally aspire to take up this position.

He recently set forth his ambitions: “To govern is the aspiration of all politicians," he declared on public radio station Chaine 3. “If we win, we will form a consensual government," he added on Tuesday.

In practice, however, few political observers believe this could ever happen. “The ‘pouvoir’ would never give the post of prime minister or any sovereign portfolio to an Islamist,” one journalist categorically states.

However, there’s no risk of this leading to the tensions or even violence of the type seen in Algeria after the 1992 elections - the army cancelled those polls after 48 percent of votes were cast for the Islamic Salvation Front (FIS) - because the Islamists within the political classes are now enmeshed with the power elite.

In the event of a fragmented parliament, the parties will have to negotiate to form alliances.

“If this happens, the prime minister could be a less ‘prominent’ political figure than Makri,” observes a source close to the presidency. “Perhaps someone who is both a technocrat and a conservative.”