Algerians, some resigned, others indignant, are split on whether or not to turn out for this Saturday’s elections 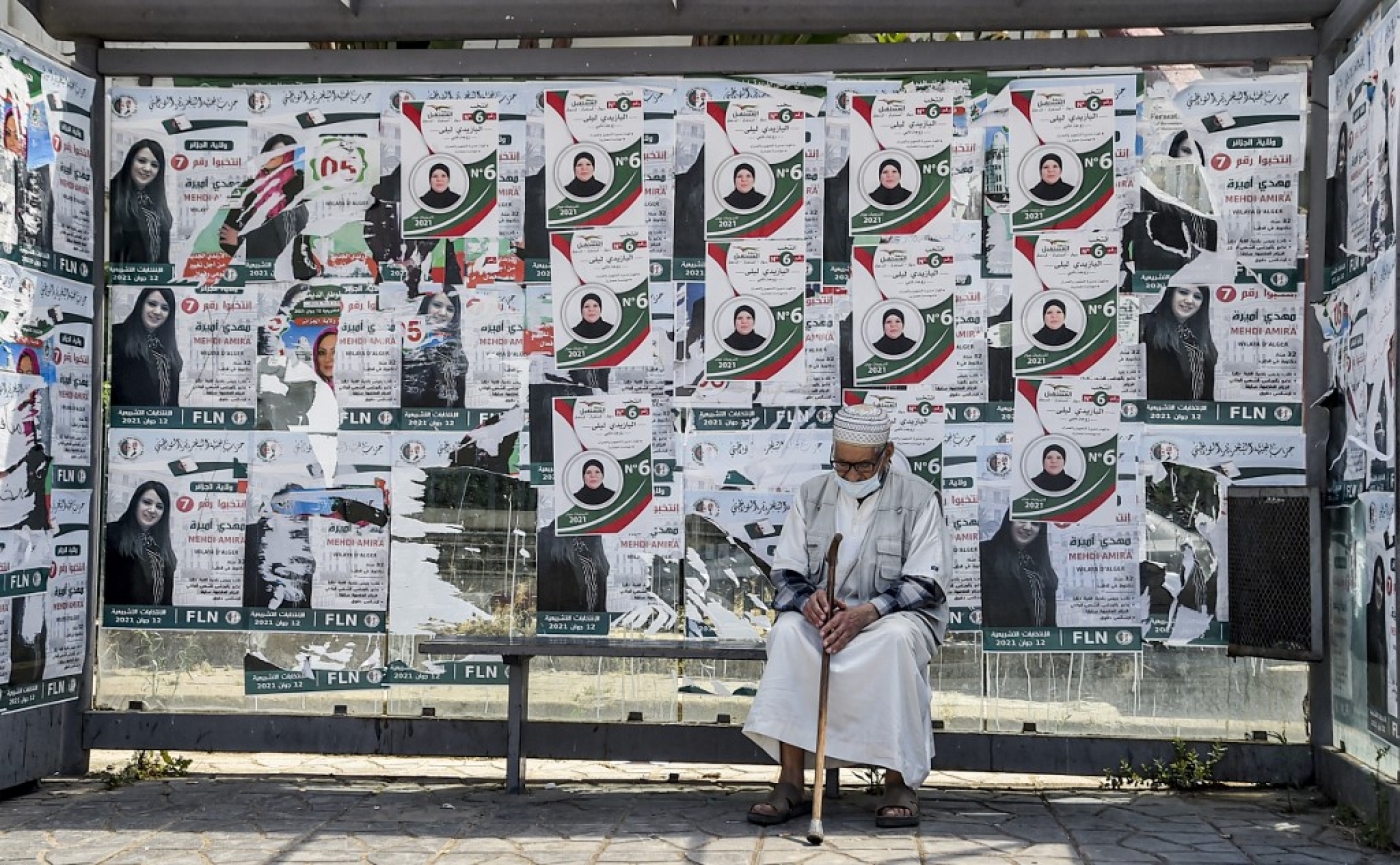 Some 24 million Algerians are eligible to vote on the 407 deputies of the National People's Assembly. They must choose from more than 2,200 lists, more than half of which claim to be "independent" (AFP/Ryad Kramdi)
By
Zohra Souamès
in
Algiers

On the streets of central Algiers, it feels like the beginning of summer. Clothes shops display their new collections and cafe terraces are packed.

Election billboards and posters line the walls ahead of Saturday's legislative elections. Each candidate poses alongside their name, position and sometimes even degree qualifications.

No fewer than 1,080 party candidates and 1,208 independent candidates have registered across the vast country for this election, which will choose the 407 new members of the People’s National Assembly (APN, the lower house of the Algerian Parliament) for a mandate of five years.

Some passers-by glance briefly at the posters, others linger, their attention perhaps captured by the slogans: “Opportunity for change", "For a Fair Algeria", "Choose Algeria", "Your Voice, Your Future", etc. Hakim, a man in his forties, says that he “has never had any interest” in the elections.

“My family are abstainers, like father like son,” he says, with some glee, to Middle East Eye.

“But that’s something that could change. For the first time, I’ve followed the electoral campaign. I follow some of the candidates on social media, particularly the younger ones. The programmes are interesting and I have my chosen candidate in mind,” he says, without revealing who.

Turnout, in the absence of opinion polls, is one of the great unknowns in this election. “[It] could be greater than the 2017 elections [38.25 percent] because young people could vote in greater numbers,” speculates a source within the Algerian Independent National Authority for Elections (ANIE).

The two previous elections didn’t garner a particularly impressive turnout: 39.83 percent in the presidential elections of December 2019 and 23.70 percent in the referendum on the reform of the Constitution in November 2020.

'These politicians know nothing about our problems'

Asked about whether he intended to vote or not, a middle-aged man near Algiers' al-Rahma Mosque, initially caught somewhat off-guard, answered with a categorical no.

“Voting is for change and I no longer believe any change is going to happen. Look at this tent," he said, gesturing, "it’s been pitched outside this building for years. It houses either families, or young homeless people. Every morning as I leave the house, that’s the image that greets me. It grinds you down. So no, I won’t vote because I no longer believe in change and the proof of it is right in front of me.”

In Bab El Oued, a working-class neighbourhood of the capital, Rachida, a woman of around 50, deplores the disparity between the people and the ruling elite. “These politicians live a million miles away from our problems! They promise us the moon while we live without even the bare minimum,” she says bitterly to MEE.

She is referring to the availability of public transport and water in the taps. For several weeks now, the supply of drinking water has been severely compromised.

The reason, according to media reports, is a lack of water in the dams that supply the city, caused by the scarcity of rainfall, and operational difficulties at the desalination plant.

Communication blunders between the Ministry of Water Resources and the Algerian Water Company (SEAAL) in charge of distribution on important water service interruptions have caused alarm among residents of the capital.

“We've had cuts in our water supply for several days, the metro hasn’t run for a year and many other problems are making our daily life more difficult," added Rachida, angrily. "And nobody gives us any explanation. How do you think we’re going to have confidence [in the political system] again? So no, I won’t be voting."

In most cases, Algerians justify not voting on the basis of social failings, and some believe this has hamstrung dialogue with public authorities for years. They don’t point the finger at the candidates standing for election, citing instead "bad government".

The last few weeks have been marked by tensions between protestors and the security forces during Friday protests organised by Hirak, the popular movement which led to the resignation of former president Abdelaziz Bouteflika.

According to the National Committee for the Liberation of Detainees (CNLD), which maintains and updates a list of arrests, trials and convictions of protestors in several Algerian cities, more than 200 people are currently detained.

“I don’t believe you should see members of society who vote as enemies. Among them are people who believe they can perhaps drive change from within. It doesn't matter that this is an illusion.”

“You could gloss over some of the things that put us off from going out to vote, such as the lack of transparency, or perhaps the electoral programmes that bear little relation to our daily reality. But in the current climate, it’s difficult to go and vote at a time when there are imprisonments and convictions,” laments Meriem, 36.

For Farid, a retired man, "violation of freedoms" are "sufficient grounds for abstention".

“I won’t be going to vote on 12 June," he told MEE. "I know absolutely nothing about any of the candidates standing in my district. In terms of police and judicial repression, I might have been more interested in candidates who came out in opposition to the violation of freedoms. But these potential candidates belong to the parties and to the civil society movement that boycott these elections. So it’s a total stalemate."

“So I’m not getting involved in any debate pitting voting against abstaining. Although it’s true that numerous parties condone repression and are therefore in conflict with my political beliefs, I don’t believe you should see members of society who vote as enemies.

"Among them are people who believe they can perhaps drive change from within. It doesn't matter that this is an illusion. The important thing is not to paint the future bleakly and to remain open to change. Essentially, no vote and no false divisions.”

Meriem says she has “always voted”. For her, abstaining is dangerous. She believes that turning out to vote does not in any way mean you are condoning the current political situation.

“The problem we face is that, whatever happens, these candidates will be elected and will vote for laws that you won’t have chosen, so I wonder if abstaining is really a solution,” she says to MEE. It’s important to engage with these elections, to start the process of change, she adds.

Although he claims “not to believe [politicians'] promises”, Hakim agrees: “I think that we’ve never known how to deal with our leaders. We’ve gone down the confrontational route and tried total disinterest. Neither of these have, in my opinion, got us any further forward. That’s why I’ve decided to go and vote. Because it will give me the right to judge them later. But I won’t stop there. I will monitor the candidate I choose very closely and this time, if the promises aren’t kept, I’ll be holding them to account.”

Hakim says his friends consider him "naive". But, he adds: “These elections are an opportunity to find out more about the intentions of these politicians. They talk about a new Algeria that will hold the interests of the people in high regard, now’s a chance to find out if such an Algeria really exists.”