Depending on whom you ask, Trump either created the crisis or handled it with courage and resolve Iraqi security forces guard the US embassy in Baghdad amid angry protests, 31 December (Reuters)
By
Ali Harb
in
Washington

On the last day of the decade, a divided Washington woke up to the news of angry Iraqi protesters attempting to storm the US embassy in Baghdad after Donald Trump authorised fatal air strikes against an Iran-backed Iraqi paramilitary group.

But depending on whom you ask, the US president either created the crisis or handled it with courage and resolve.

Later on Tuesday, the Pentagon said it was deploying additional troops to Baghdad to ensure the safety of American personnel in the embassy.

In a tweet that summed up the partisan divisions in Washington, Trump described his own handling of the situation as the "Anti-Benghazi!" - a clear dig at Democrats.

In 2012, four Americans were killed at the US diplomatic mission in Benghazi, causing an uproar from Republicans who accused Democrats - particularly then-Secretary of State Hillary Clinton - of not providing adequate security to US diplomats in Libya.

On Sunday, US air strikes killed 25 fighters from the Popular Mobilisation Units (PMU), a mostly Shia umbrella group of paramilitaries that formed in 2014 to counter the advances of the Islamic State group (IS).

Washington had blamed the Iran-backed PMU faction Kataib Hezbollah (KH) for a rocket attack in Kirkuk that killed an American contractor and injured several Iraqi and US service members.

The American attack came against the warnings of the Iraqi government, which vehemently condemned the air strikes.

"Trump has rendered America impotent in the Middle East. No one fears us, no one listens to us," Democratic Senator Chris Murphy tweeted on Tuesday.

The attack on our embassy in Baghdad is horrifying but predictable.

Trump has rendered America impotent in the Middle East. No one fears us, no one listens to us.

America has been reduced to huddling in safe rooms, hoping the bad guys will go away.

Republican Congressman Lee Zeldin responded to Murphy by suggesting that IS militants did not fear the United States under former Democratic President Barack Obama.

"The victims in Benghazi btw never safely made it out of a safe room & the bad guys did get away," Zeldin wrote.

He went on to accuse many Democrats of "rooting & working against America" because they hate Trump.

For her part, Senator Elizabeth Warren, who is seeking the Democratic nomination for president, blamed Trump for leaving the Iran nuclear deal.

"Trump's reckless decisions to walk away from the Iran Deal and now to launch air strikes in Iraq without Iraqi government consent have brought us closer to war and endangered US troops and diplomats," she wrote on Facebook.

"We should end the forever wars, not start new ones."

Tensions between Washington and Tehran have been intensifying since May 2018, when Trump left the multilateral nuclear agreement, which curbed Iran's nuclear programme in exchange for the lifting of sanctions against its economy.

Since then, the US administration has imposed damaging sanctions against various Iranian industries and individuals.

In turn, US intelligence officials say, Iran responded by threatening regional security. Earlier in 2019, Tehran was accused of several attacks in the Gulf, including the sabotage of two oil tankers off the coast of the UAE.

Riyadh and Washington also blamed Tehran for an attack on major Saudi oil facilities in September.

Trump's malpractice in the region is making us less safe. Time for Congress to stop this foolish rush to war

Moreover, the Kirkuk rocket strike that Washington has attributed to KH is not the first incident against US forces that the Americans have blamed on the Iran-linked PMU.

US officials pointed the finger at Iran-backed fighters for several rocket attacks near the US embassy in Baghdad earlier this year.

On Tuesday, Democratic Senator Tim Kaine cited the Iraqi government's rejection to the air strikes, calling on Congress to intervene and stop the escalation.

"The US conducted air strikes in Iraq over the objections of the Iraqi government. Now Iraqi protesters broke into the US Embassy," he wrote. "Trump's malpractice in the region is making us less safe. Time for Congress to stop this foolish rush to war."

"The attack on the US embassy in Baghdad is a tragedy and a result of the Trump administration's reckless escalation and incoherent foreign policy," Castro said.

"I'm praying for the safety of our diplomats and service members in Iraq."

Democratic Congresswoman Tulsi Gabbard, who is running for president as well, said the US air strikes were "impulsive, short-sighted, and lacked strategic purpose". 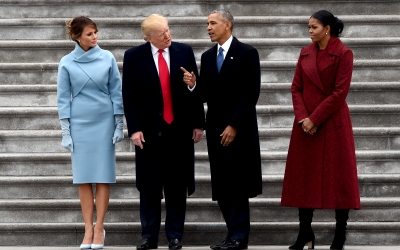 "It has led to our embassy being besieged and undermined our relationship with the Iraqi government and people," she wrote in a series of tweets.

"Serving the interests of Saudi Arabia and Jihadists like AQ, Trump is taking us deeper and deeper into mid-east quagmire."

But as criticism from Democrats grew, Republicans pivoted back to Benghazi.

"President Trump is determined to protect American personnel and expects our Iraqi partners to step up to the plate," key Senator and Trump ally Lindsey Graham wrote. "No more Benghazis." 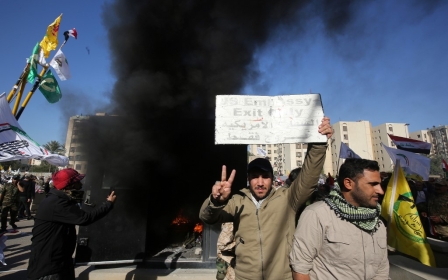 Inside Iraq
Thousands of Iraqis storm US embassy over air strikes