Fifty people were killed in air strikes on Azaz children's hospital and others in northern Syria on Monday, says UN The UN says that 50 people were killed in attacks on at least three medical facilities including a children's hospital in northern Syria on Monday, with one medical charity saying it appeared they had been deliberately attacked by Russian or government jets.

On Monday evening, UN chief Ban Ki-Moon called the strikes "blatant violations of international law", with a UN spokesman saying the attacks had "cast a shadow" on the ceasefire agreement made between the 17-country International Syrian Support Group last week.

Fears of an escalation of the five year civil war were further sparked as Syrian government forces and Kurdish People's Protection Units (YPG) fighters reportedly took Tel Rifaat on Monday night, a key town enroute to the city of Azaz where air strikes fell on Monday.

As Turkey shelled Syrian targets across its border for the third day in a row, Turkish Prime Minister Ahmet Davutoglu said on Monday his country would not allow Azaz to fall to Kurdish fighters. Meanwhile, Russia's defence ministry said Turkey's shelling was "open support to international terrorism".

Syrian government forces reportedly told Al Jazeera late on Monday that they planned to continue their march to Azaz, a flashpoint town in Aleppo province near the Turkish border, where it would appear a major escalation in fighting could occur.

Earlier in the day, at least 14 people were reported killed when bombs hit a children's hospital in Azaz.

A video posted by a French NGO operating in Syria reportedly captured the first moments after the attack, saying that there were "no terrorists or combatants, only babies".

"We have been moving scores of screaming children from the hospital," medical aid worker Juma Rahal told Reuters.

Two other hospitals in Maaret al-Numan, Idlib province, were also hit. At least seven people were reported killed when four bombs destroyed a hospital supported by the Doctors Without Borders (MSF) charity.

MSF said it believed its hospital was attacked by either Russian or Syrian government forces, while Turkish officials separately said Russian planes hit the Aleppo hospital.

Neither report was independently verified or confirmed by the Russian government.

Syria's ambassador to Moscow, Riad Haddad, said the hospital had been the target of a US raid.

The United States, which like the UN did not identify who carried out the air strikes, said two civilian hospitals were hit in and around Aleppo in northern Syria: one run by medical charity Doctors Without Borders (MSF) and another in Azaz city.

Such action "casts doubt on Russia's willingness and/or ability to help bring to a stop the continued brutality of the Assad regime against its own people," the State Department said.

Russia has been conducting an intense bombing campaign against rebels in the nearby province of Aleppo, and has also hit targets in Idlib.

Rescue workers and rights groups say the bombing has killed scores of civilians at market places, hospitals, schools and residential areas in Syria. Massimiliano Rebaudengo, the head of MSF's Syria mission, said the Idlib attack "appears to be a deliberate attack on a health structure, and we condemn this attack in the strongest possible terms.

"The destruction of the hospital leaves the local population of around 40,000 people without access to medical services in an active zone of conflict."

MSF said at least seven people were killed and at least eight members of staff were missing after four rockets hit the 30-bed facility, which had 54 staff, two operating theatres, an outpatients' department and an emergency room.

The charity's president, Mego Terzian, said he believed Russia or Syrian government forces were behind the attack.

The MSF organisation supports about 150 hospitals in Syria, with 16 hospitals - or about one every three days - hit this year alone.

A video shared by investigative website founder Eliot Higgins reportedly shows the aftermath of the bombing on the MSF hospital, although the footage is yet to be verified by the group. 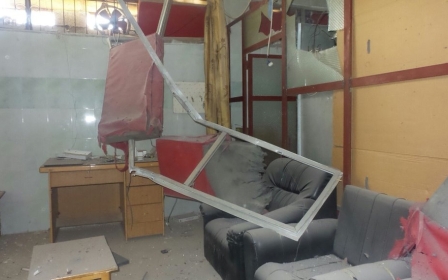