A British umbrella group representing the country's Muslims on Friday called on Boris Johnson to reassure the community of its place in society following the Conservative Party's election victory.

The prime minister and his party have been accused of propagating and ignoring Islamophobia, both during the election campaign and before, and the Muslim Council of Britain said British Muslims were now fearful for their future.

"Mr Johnson commands a majority, but there is a palpable sense of fear amongst Muslim communities around the country," Harun Khan, the group's secretary-general, said in a statement.

'Mr Johnson commands a majority, but there is a palpable sense of fear amongst Muslim communities around the country'

"We entered the election campaign period with longstanding concerns about bigotry in our politics and our governing party. Now we worry that Islamophobia is 'oven-ready' for government."

Johnson on Friday hailed a political "earthquake" after securing a sweeping election win, which clears the way for Britain to finally leave the European Union next month after years of political deadlock.

With all results declared for the 650-seat parliament, Johnson's Conservative party had secured 365 seats, its biggest majority since the heyday of Margaret Thatcher in the 1980s. 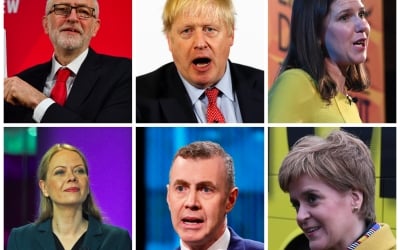 Standing outside Downing Street, Johnson said he wants to lead a "one nation" government and bring the country together after a particularly divisive political period.

However, Khan urged him to redouble his efforts to "heal the country and bring communities together".

"We understand that the prime minister insists that he is a one nation Tory. We earnestly hope that is the case and urge him to lead from the centre and engage with all communities," Khan said.

An early result had set the pattern for the night after Labour lost Blyth Valley in northeastern England, a traditional mining community which it had represented since the constituency was created in 1950.

The anti-Brexit Liberal Democrats announced they would replace Jo Swinson as leader after she lost her seat in western Scotland to the Scottish National Party (SNP).

The pound rose late on Thursday on hopes that Johnson would now deliver his promise to "Get Brexit Done" after years of uncertainty over Britain's future.

With a large majority of MPs, he seems certain to be able to get the divorce deal he struck with Brussels through parliament in time to meet the next Brexit deadline of 31 January.

Ratifying the deal would formalise the end of almost five decades of EU-UK integration, although both sides still need to thrash out a new trade and security agreement.

Johnson became prime minister in July, replacing Conservative predecessor Theresa May who had lost the party's majority in the last election in 2017 and had subsequently been unable to deliver the UK's exit from the European Union due to parliamentary stalemate and opposition to her negotiated deal.

Johnson called the election after winning an initial parliamentary vote to take the UK out of the EU, and ran his campaign on a promise to "get Brexit done" by the end of January. Parliament is required to approve the final terms of the UK's exit from the EU, which British voters narrowly supported in a 2016 referendum.

In pressing for Brexit, Johnson alienated and forced Conservative moderates out of the party, adopting populist right-wing rhetoric which saw former colleagues accuse him of "inciting violence".

His leadership of the Conservatives has also been dogged by complaints that the party has failed to get to grips with Islamophobia within its ranks.

Johnson has himself been blamed for an increase in hate crime attacks against Muslim women after comparing women who wear the niqab to "letter boxes" and "bank robbers" in a newspaper column which he wrote in 2018 when he was not a member of the government.

Johnson is seen as a close ally of US President Donald Trump and has talked about securing a future trade deal with the US.

Israel and the Gulf states are also likely to be British targets for post-Brexit trade deals.

As foreign secretary from 2016 to 2018, Johnson was seen as gaffe-prone. He was accused in 2017 of undermining diplomatic efforts to free a British-Iranian woman held in Iran on espionage charges after saying that she was teaching people to be journalists. He later retracted the comments.

In the same year, he commented that Libya's war-stricken city of Sirte could be a "new Dubai" once the dead bodies had been cleared up. Johnson subsequently apologised.

Labour's campaign was damaged by criticism accusing Corbyn of failing to tackle antisemitism in the party, which led to several MPs quitting the party, condemnation of Corbyn by the UK's chief rabbi, and Labour being referred to the UK's equalities watchdog.

Supporters of Corbyn, a longstanding advocate for Palestinian rights, complained that his campaign was also undermined by hostile media coverage.

Writing for Middle East Eye on Thursday, political commentator Peter Oborne said that Corbyn had been subjected to "character assassination" on a scale unprecedented in British political history.

"He is one of a handful of British politicians who has repeatedly tried to do the decent thing. He deserves credit for the determined and morally courageous way he's conducted himself," Oborne wrote.

While the Conservative manifesto was light on foreign policy commitments affecting the Middle East, Labour had pledged to ban arms sales to Saudi Arabia, over its war in Yemen, and Israel over human rights abuses in occupied Palestinian territories.

The SNP, which opposes the UK's exit from the EU and wants a referendum on Scottish independence, will be the third-largest party in parliament after it took 48 seats, an increase of 13 over the last election. Politics
Boris Johnson may win the election. The rest of us will lose
Peter Oborne 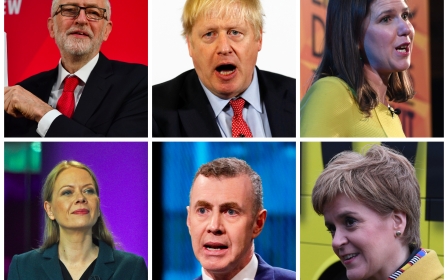