Forced to alter their plans, Palestinian couples bring back beloved yet forgotten traditions to celebrate love 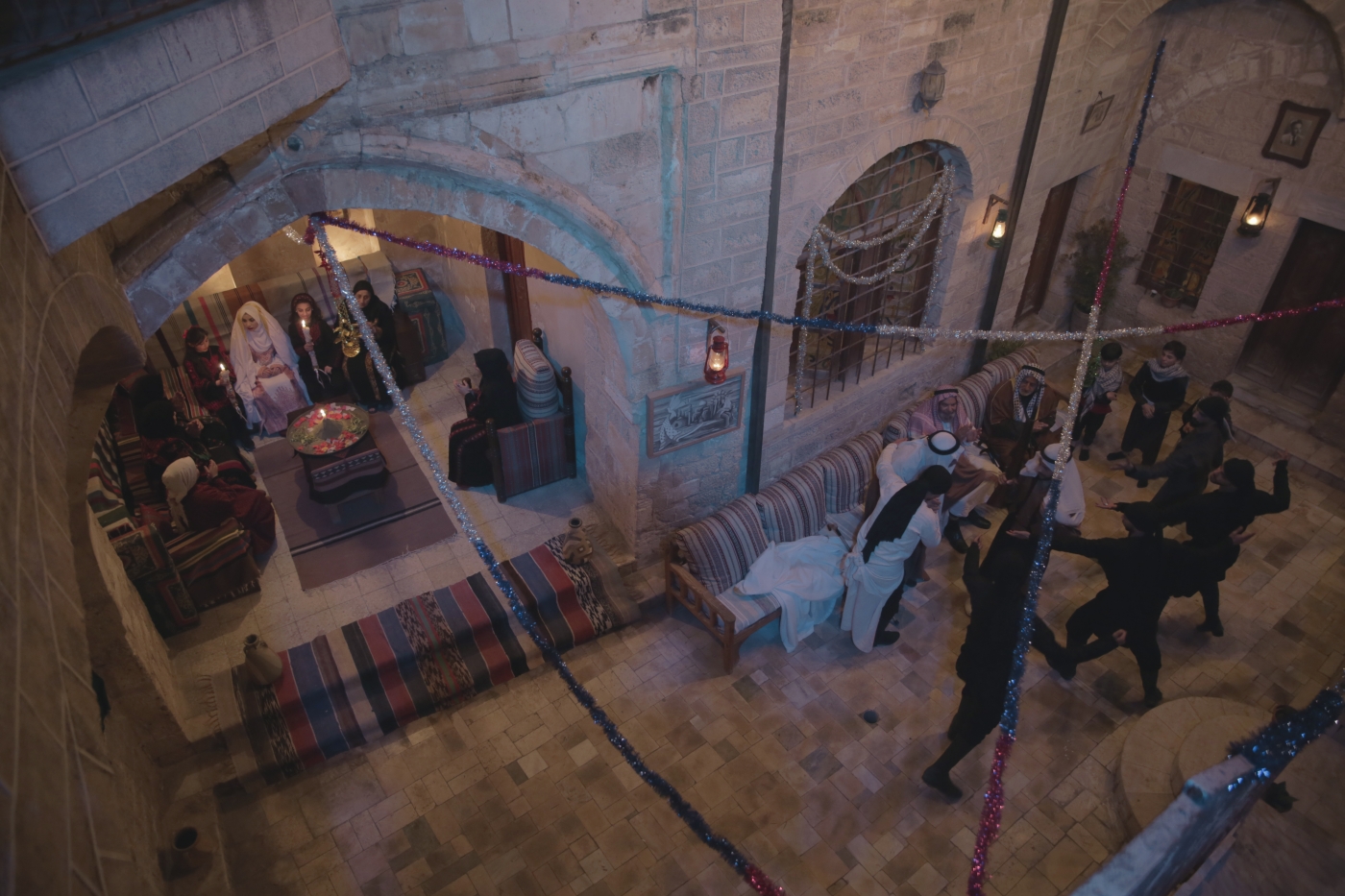 "This is how joy enters a home" (Mohammed Salem/MEE)
By
Tareq Hajjaj
in
Gaza, Palestine

In the humble courtyard of their home, trilling cries of joy and the voices of women singing traditional Palestinian songs reverberated as the family celebrated two young newlyweds set to begin their life together.

The pair were greeted at the husband's home with the familiar faces of their close friends and family, away from the hustle and bustle of wedding halls, loudspeakers and modern music.

With the closure of wedding halls in the Gaza Strip as part of coronavirus measures, couples have resorted to celebrating in their homes, particularly those who were engaged to be wed before the outbreak.

The Ministry of Health banned all gatherings in mid-March and ordered the closure of all halls, restaurants and hotels.

For the older women in the family, the return to wedding ceremonies that are more intimate is even more reason to celebrate.

"These weddings take us back to the past; this is how I got married," says the groom's mother, Ezdihar Yaseen, who also goes by Umm Mohammad.

"My husband's and my female relatives gathered around me, singing to me, their voices merging with the music of the oboe and drums, clapping and singing. I really felt like a bride amongst them," she tells Middle East Eye, describing her wedding 53 years ago.

"I got married here, in this house, grew older, gave birth to my children, and here I am, marrying my son off in the same place. This is how joy enters into a home – not by taking our joy and celebrating it in a rented hall, then returning to our empty homes without instilling memories of happiness in them."

Umm Mohammad believes modern-day weddings have caused the humbler ceremonies to become "absent from the Palestinian imagination" and to lose their "traditional Palestinian identity".

"The weddings started taking place outside the home, in luxurious wedding halls, tempting younger people who have not experienced the charm of traditional Palestinian weddings," she says.

Over time, this has deprived young people of the charm of traditional celebrations, Umm Mohammad says.

For her, celebrating this way is more beautiful, elegant and cost-effective.

Highlighting the difference in the price tags, the mother of the groom says that, under the current circumstances, many men in the community "have been able to get married quicker because the financial costs are very little".

"I've married off three of my children, but I did not taste the same happiness as I did this time; this joy has taken me back to my youth."

The Gaza Strip has been under a stringent Israeli blockade for nearly 13 years. Those who want to wed in Gaza must bear costs that are comparatively high for young men, amid difficult humanitarian conditions and high unemployment rates.

The groom’s father, Darwish Yaseen, says that the weddings of his other sons had cost multiple times the amount of that for his son Mou'nes.

While some financial aspects of getting married have remained the same, conditions under Covid-19 have eased the financial burden of the event.

Darwish, or Abu Mohammad, explains that the dowry paid to a bride in Gaza ranges between 3,000 and 5,000 Jordanian dinars (about $4,000 to $7,000), mentioning one of the currencies used in the Palestinian territories. This amount hasn't changed, he says, as it is part of traditional values.

"Everything after that step has changed completely," Abu Mohammad tells MEE.

He says that, after the dowry is paid, the groom must bear the burden of costs that amount to three times the value of the dowry: paying for the wedding hall, renting buses to transport guests to the wedding, a party and dinner held by his family the day before the wedding, and, on the wedding day, lunch is hosted for the two families and relatives.

"The corona crisis caused all these formalities to be dropped," says Abu Mohammad, adding that the change preserves the traditional form of Palestinian weddings, whereby the family sent food and sweets to neighbours and relatives, brought the bride to the decorated home, and a group of women carried out the procession for a few hours.

It was a joyful time, he says

Mou'nes, the 24-year-old groom, says his wedding was just as pleasurable and joyous in his home amongst his family.

During the weddings of his older siblings, Mou'nes enjoyed when his mother would recall and reminisce over the traditional ceremonies of her time.

The scenes of his wedding, he says, were in line with the weddings his mother would describe, adding to the happiness his felt at his own ceremony.

"Many of my friends wish to get married, but their financial situations do not allow them to due to the high cost of weddings," Mou'nes says.

Upon hearing of his wedding, some of his friends started thinking about their own plans to start a family.

"I told my friends about my wedding, and I found that they have the desire to take advantage of the current situation to get married."

Sumayya Munther, Mou'nes' 19-year-old bride, says that while she was excited about her older sisters' weddings in fancy halls, her traditional ceremony was the most intimate, particularly celebrating in the home in which she started her new life.

"I was delighted with all the singing and joy in the house that I would live in. I remember all the details – my laughs and dancing in the courtyard [of] the home I will live in and start my family. This place will hold many memories that I will tell my children," she says.

Munther says the ceremony has inspired one her friends to consider bringing forward the date of her own wedding.

She could not have imagined that when all the plans changed, her wedding would turn out to be more beautiful than she envisioned.

Munther says the traditional songs sung by the women in the family were much more meaningful.

"It was the joy of a lifetime, and it was rooted in Palestinian heritage. The songs were close to the heart, bearing the scent of Palestine and Jerusalem." Covid-19
Coronavirus and Gaza: A besieged health system facing the threat of pandemic