Three inmates dead as parliament prepares to pass a controversial bill that would see the release of 100,000 prisoners First aid workers wearing protectional equipment looks after a woman suspected of being infected with COVID-19, as she is evacuated by ambulance on April 12, 2020 in Istanbul. (AFP)
By
Ragip Soylu
in
Ankara

Turkey revealed on Monday that there had been outbreaks of coronavirus in its prisons, with a total 17 confirmed cases among inmates, including three deaths.

In televised remarks, Minister of Justice Abdulhamit Gul said all cases were registered at open prisons, where the restrictions on inmate movement are at a minimum. Inmates in those prisons usually serve for light offences.

He added that the authorities were unable to avoid outbreaks, despite carrying out several measures to protect the 70,000 inmates in those prisons, such as suspending all visits and requiring staff and prisoners to wear masks at all times.

“However, we don’t have any cases in other [regular or high-security] prisons,” Gul said.

Turkey's prisons are overpopulated, currently operating at around 120 percent capacity. A government-drafted bill to reduce prison sentences that could free nearly 100,000 inmates was fast-tracked last week. The bill is expected to be passed by parliament at the latest on Tuesday. However, human rights groups and opposition parties have criticised the bill for ruling out the early release of politicians, activists and journalists who have been jailed on charges of "terrorism propaganda".

“Thirteen out 14 patients are in good condition. However, one inmate is in intensive care,” Gul said.

The minister also said that 14 judges and prosecutors, 32 courthouse employees, 79 prison employees and 34 members of the council of forensic medicine had tested positive for the virus.

With 97 more deaths, the total death toll has reached 1,198. Koca said the number of intubated patients had decreased in the last two days, with early treatment being more available thanks to an increase in daily tests, which now exceeded 35,000 every day.

Last Friday, Turkey announced a weekend-long curfew in its 30 biggest cities. It is now the second hardest-hit country in the region after Iran, where Covid-19 has killed more than 4,500 people.

Ankara has imposed strict measures to curb the spread of the virus - banning all public gatherings, shutting down travel in and out of dozens of cities, closing schools, suspending flights from many countries and imposing a curfew on citizens under 20 and over 65. Everyone is now required to wear a face mask while at the marketplace. 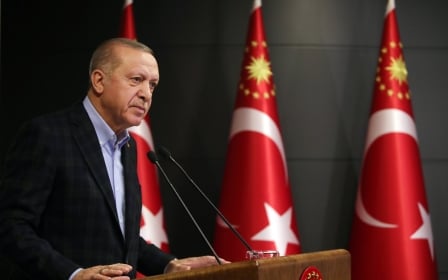