David Cameron urges Putin to not back Assad They are backing the butcher Assad, which is a terrible mistake for them," said Cameron (AA)
By
AFP

Moscow said its airstrikes are targeting the Islamic State group (IS) fighters, but British intelligence forces claim that only five percent of the Russian airstrikes thus far have hit the group.

"Tragically, what has happened is that most of the Russian airstrikes, as far as we have been able to see so far, have been in parts of Syria not controlled by ISIL but by other opponents of the regime," Cameron told BBC television.

"They are backing the butcher Assad, which is a terrible mistake for them and for the world. It is going to make the region more unstable, it will lead to further radicalisation and increase terrorism.

"I would say to them: 'Change direction, join us in attacking ISIL, but recognise that if we want to have a secure region, we need an alternative leader to Assad.

"He can't unite the Syrian people. Assad has driven far more people from their homes with the barrel bombs and the brutality than even the brutal death cult of ISIL."

Cameron said he would not order airstrikes against Islamic State in Syria without a parliamentary vote to do so.

"Assad, with his barrel bombs and his chemical weapons and his wholesale slaughter of civilians is the recruiting sergeant for ISIL," Hammond added.

"And Russian support for him will drive the opposition in Syria into the arms of ISIL, strengthening the evil that Putin says he wants to defeat."

Hammond said Britain would pressure Putin to end "aggression in Ukraine", where Moscow-backed separatists are warring with Kiev's forces for territory.

Speaking later at the conference, Defence Secretary Michael Fallon said it was wrong for "anybody, including Russia" to "prop up the tyrant (Assad)".

"Syria deserves to be free of both ISIL and Assad," Fallon said in a speech.

The Conservative Party, which won its first majority in almost 20 years in a general election in May, is gathering its members in Manchester until Wednesday to discuss its policies for the year ahead. 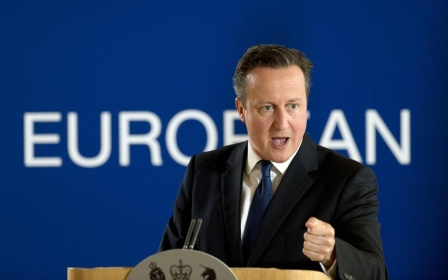