Tuesday's US drone strike marks a departure from normal attacks, which target vehicles thought to be carrying small numbers of militants The early morning raid at a camp used by "more than 70" Al-Qaeda in the Arabian Peninsula (AQAP) fighters "deals a blow to AQAP's ability to use Yemen as a base for attacks that threaten US persons," Pentagon spokesman Peter Cook said in a statement.

Government officials said the raids hit a training camp in Hajr, west of Hadramawt's provincial capital Mukalla that has been held by al-Qaeda since April.

They said the strikes killed and wounded dozens of people but did not divulge any details on whether any civilians were part of the death toll.

Around 230 people are thought to have been injured in the strike, and witnesses saw dozens of AQAP fighters rushing to hospital to give blood.

Tribal sources said wounded militants were taken to a hospital in Mukalla, while witnesses spoke of around nine vehicles rushing casualties out of the area.

The United States has waged a long-standing drone war against AQAP militants, killing several of its leaders.

But Tuesday's raid was unusual because US strikes usually target a small number of suspected Al-Qaeda members while they are travelling in a vehicle.

"The Americans felt that Al-Qaeda has started to expand its influence in an unacceptable manner after it established fixed camps to train its supporters," said Mustafa al-Ani, an analyst at the Gulf Research Centre.

He said Tuesday's strike was the first by Washington in nearly a year against a fixed Al-Qaeda position in Hadramawt.

The attack comes after war planes from the Saudi-led coalition struck al-Qaeda in Aden for the first time since the pro-government air campaign was launched, targeting fighters from the rebel Houthi movement.

The World Health Organisation says fighting in Yemen since March 2015 has claimed the lives of almost 6,300 people, while the UN human rights chief last week said half of all those killed were civilians with the vast majority of those deaths caused by coalition strikes.

On Tuesday, Amnesty International and Human Rights Watch urged the United States, Britain and France to halt arm deliveries to Saudi Arabia that could be used in the Yemen conflict.

Riyadh launched the intervention in Yemen last year after Houthi rebels seized control of large parts of the country, including the capital Sanaa, and forced the government into exile.

Loyalist forces backed by coalition strikes and ground troops have since retaken much of the south but have failed to dislodge the rebels from other areas including Sanaa.

They have recaptured the port city of Aden and the southern port has been declared the permanent seat of the government of President Abd Rabbuh Mansour Hadi.

But in the past few weeks, fighters from AQAP and the Islamic State (IS) group have bolstered their presence in southern and eastern Yemen.

The fighters have also reinforced their grip on parts of Aden in defiance of the authorities and the Saudi-led coalition, as the latter were busy pounding the Houthi rebels.

AQAP, which is well entrenched in Yemen where it has been active for years, is classified by the United States as al-Qaeda's deadliest franchise and has claimed attacks on the West in the past, most recently the attack on French satirical magazine Charlie Hebdo in January 2015.

Ani, from the Gulf Research Centre, warned that AQAP could retaliate over Tuesday's drone strike "if the human losses are as big as the Americans say".

Hopes for an end to the fighting have been raised as Houthis and Yemeni government officials have reportedly agreed to begin a ceasefire ahead of the resumption of peace talks expected to begin in April.

The agreement for a ceasefire in the near future came as Houthis met with the UN envoy to Yemen, Ismail Ould Cheikh Ahmed, in the Yemeni capital Sanaa on Sunday, AP reported. 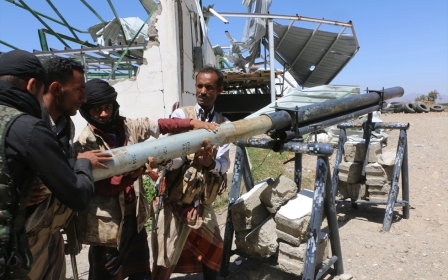