Influential groups and figures in Algeria - including within the ruling party - piled in on the country's beleaguered President Abdelaziz Bouteflika on Wednesday, joining the army's call for him to be declared unfit to rule.

Under severe pressure after army chief Gaid Salah on Tuesday called for the president to be removed, Bouteflika faced a fresh blow from within his own FLN party as members of its central committee backed the demand.

"We announce our support for the initiative as a start to a constitutional plan that will allow us to protect our country from dangers," they said in a statement.

Algerian media has speculated that the members are oppositional figures within the ruling party, though in the statement they claim to represent the opinions of the majority of the central committee. In Algiers, the 'revolution of smiles' spreads everywhere
Read More »

Public haemorrhaging of support from the elements of the FLN and the army, two of Bouteflika's longest and closest allies, is the latest major setback since huge crowds began to protest his candidacy for a fifth presidential term last month.

In response, the 83-year-old promised not to run again, though vowed to oversee a period of reform that would result in elections at an unspecified date in the future.

Government sources told Middle East Eye that a "consensus had to be reached" between Algeria's different decision making bodies before Salah made his speech.

Ahead of the FLN statement, former Prime Minister Ahmed Ouyahia and the ruling party's coalition partner the RND added their names to the list of influential groups and figures declaring their opposition to Bouteflika.

Ouyahia, who was recently fired from the premiership, was once considered a key ally to the president and has served as prime minister under him three times.

In a statement signed by Ouyahia on behalf of the RND, he said the party "recommends the resignation of the president ... with the aim of smoothing the period of transition".

The General Union of Algerian Workers (UGTA), a powerful syndicate seen as close to the government, has also supported calls for Bouteflika to step down.

Meanwhile, EU representative for foreign affairs Federica Mogherini called for "free, fair and inclusive elections" to be held for the Algerian presidency, "within a reasonable time".

Algeria's Constitutional Council on Wednesday said that it would discuss whether to invoke Article 102 of the Algerian constitution.

Based on the constitution, the chairman of parliament's upper house Abdelkader Bensalah would be caretaker president for at least 45 days should Bouteflika be removed from office, Ennahar TV station reported.

Bensalah, 76, is one of the founders of the RND (Democratic National Rally) alongside Ouyahia. He is still regarded as a Bouteflika loyalist.

A key part of his role as leader of the upper house includes being the figure who "represents" the head of state during official visits by foreign dignitaries.

However, sources told MEE that his allegiance to the president, as well as his own fragile health, may lead him to be quickly cast aside in the brewing transition process. 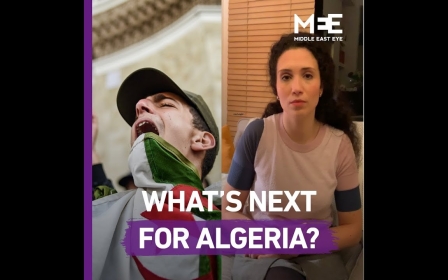 Algeria
'Flip the system on its head': Why are Algerians protesting despite President Bouteflika's promise to go?