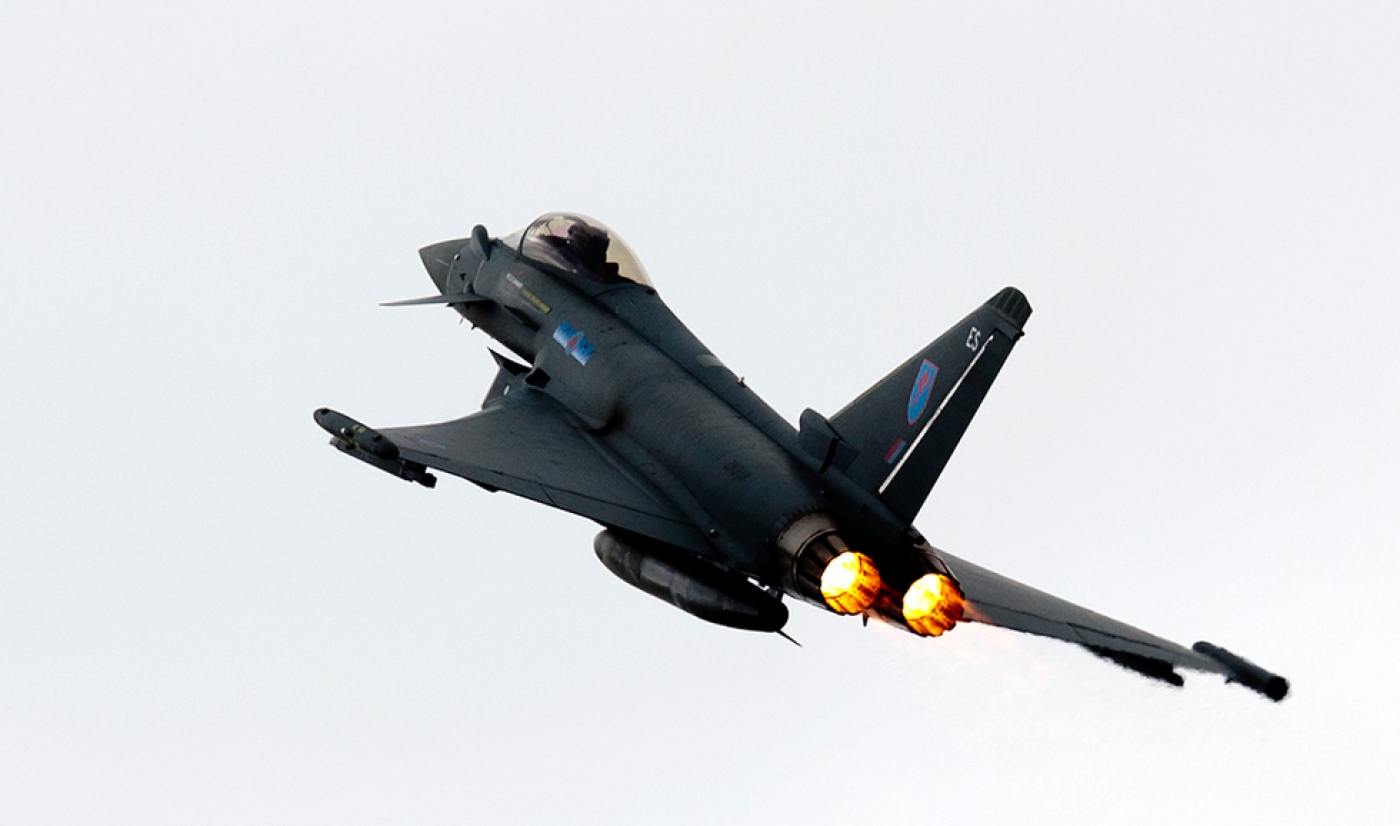 A Eurofighter Typhoon takes part in a flying display at the Farnborough airshow in 2012. (AFP)
By
Jamie Merrill

Some of the world’s largest defence firms will descend on the small English town of Farnborough this week in what human rights campaigners have labelled the “oil in the machinery” of the global arms trade.

This week’s Farnborough International Airshow, held 30 miles west of London, will bring together major arms exporters, including BAE Systems of the UK and US giant Lockheed Martin, with a string of Middle East governments accused of committing war crimes in Yemen and human rights abuses at home.

The five-day event, which opens on Monday, will see a significant presence from some of the world’s major arms firms, with many exhibiting a range of advanced weaponry that includes jet fighters, missile systems, armoured vehicles and drones.

Officials from Saudi Arabia are expected to attend the event, which comes less than a week after Campaign Against Arms Trade (CAAT) won a judicial review of UK arms exports to the country amid allegations its armed forces were involved in air strikes in Yemen that hit schools and hospitals. Saudi Arabia and its allies have denied causing large-scale civilian deaths in their support for the government against rebel Houthis and other armed groups.

Andrew Smith, spokesman for CAAT, said: “UK arms exports to Saudi are subject to a judicial review, yet the government is pulling out all stops to promote and sell more weapons.

“The government is always talking about human rights and democracy and telling us how rigorous and robust its arms export criteria are, but nothing could be further from the truth. The sort of arms on sale at Farnborough have been central to the devastation of Yemen.”

The list of the military delegations invited to attend has not been published yet, but among those invited to attend the event in 2014 were Saudi Arabia, Bahrain, Oman, Qatar, Libya and Algeria. Bahrain and Qatar are both members of the Saudi-led campaign in Yemen.

Officials from Saudi Arabia have attended the event every year since 2004, while this year’s event is expected to be the third in a row that British Prime Minister David Cameron will attend.

“Events such as Farnborough International are the oil in the machinery of the international arms trade," said Smith. "They wouldn’t be possible without government support. Civil servants and arms dealers will be using it as a chance to promote arms sales to human rights abusers and dictatorships like Qatar, Bahrain, and Saudi Arabia.”

One of the major attractions at the show will be the Eurofighter Typhoon jet, produced by a European consortium including BAE Systems. An advanced model of the jet will display its ability to carry an expanded range of air-to-ground weapons as its manufacturer hopes to secure orders from Kuwait, Oman, Saudi Arabia and Qatar.

Kuwait ordered 28 of the aircraft in April in a £5.6bn ($7.3bn) deal that was described as a “massive boost” to the Eurofighter programme. Saudi Arabia has already ordered 72 of the jets, which have been used in its bombing campaign in Yemen.

In February, Amnesty International said BAE-Systems had seen a major boost in its profits thanks to continuing sales and engineering support of its Eurofighter Typhoon jet to the Royal Saudi Air Force.

Bahrain is still understood to be considering the purchase of up to several dozen Eurofighter Typhoon jets in a move that would be seen by some as a reward for the UK’s relative silence over human rights concerns in the country. However, last month a senior engineer in charge of the Eurofighter programme did not list Bahrain among potential customers.

The Typhoon sales drive at Farnborough comes as the White House is dragging its feet in approving a major sale of jet fighters to three Gulf states, according to a group of US senators who say the delay will harm Washington’s relationships in the Gulf as it seeks to fight the Islamic State group and curb Iranian influence.

The sale of advanced F-16 fighters to Kuwait, Qatar and Bahrain has been pending for two years, primarily because federal rules prohibit US arms sales that could undermine Israel’s military advantage in the region, the Wall Street Journal reported last month.

Meanwhile, after years of delays, technical problems and massive cost overruns, the US Air Force is using Farnborough Airshow to display its new F-35 stealth fighter, in what will the biggest attraction for aviation enthusiasts.

The UK has already committed to purchasing 24 of the aircraft at around $85m per aircraft, but the Pentagon hopes that Iranian investment in advanced surface-to-air missiles will prompt many of the Gulf states to consider investing in the fifth-generation fighter. 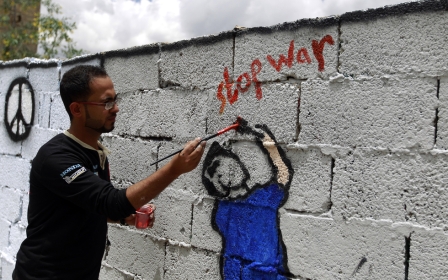 Abdullah's War
Jordan's arms expo: Where war is business, and business is good