The FBI has inadvertently named a Saudi embassy official in Washington suspected of orchestrating support for the 9/11 attackers, a report by Yahoo News revealed.

“The disclosure came in a new declaration filed in federal court by a senior FBI official in response to a lawsuit brought by families of 9/11 victims that accuses the Saudi government of complicity in the terrorist attacks,” the report, authored by Michael Isikoff, said.

The Saudi official’s identity was deemed a “state secret” since last year.

Families of 9/11 victims had been given his identity in September, but under the condition that they would not disclose it.

The declaration names Mussaed Ahmed al-Jarrah, a mid-ranking Saudi diplomat who served at his country’s embassy in Washington DC between 1999 and 2000.

Jarrah was in charge of overseeing Saudi-funded activities at mosques and Islamic centres in the US. Lawyers for the 9/11 families have previously identified Jarrah as one of nine Saudi officials suspected of having key information related to the case.

A spokesperson for the victims’ families told Yahoo News that the declaration represents the first time FBI investigators believed they discovered a link between 9/11 hijackers and the Saudi government.

“This shows there is a complete government cover-up of the Saudi involvement,” said Brett Eagleson, a spokesman for the affected families and whose father was killed in the attacks. “It demonstrates there was a hierarchy of command that’s coming from the Saudi embassy to the Ministry of Islamic Affairs [in Los Angeles] to the hijackers.”

The 40-page declaration, filed by Jill Sanborn, the assistant director of the FBI’s counterterrorism division, hides the Saudi diplomat’s name in all instances but one. The discrepancy was first noted this week by a Yahoo News reporter.

The US government has never released documentation indicating that the Saudi government was involved in 9/11.

Still, last year, during a meeting at the White House with the families of the victims on the anniversary of the attacks, US President Donald Trump promised the visitors that he would order the attorney general to release the name of a Saudi diplomat who had apparently been linked to 9/11 in an FBI report years earlier.

The next day those hopes were dashed as Attorney General William Barr said the release of such records would not be possible.

Their disclosure risked "significant harm to the national security", Barr said at the time.

The Saudi government has long denied involvement in the 9/11 attacks. 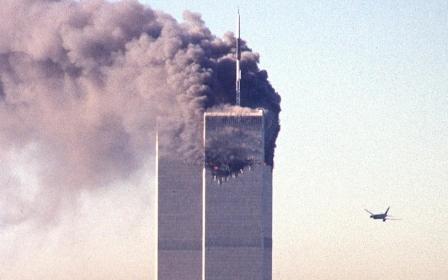