Happily never after: In Gaza, marriage becomes an impossible dream 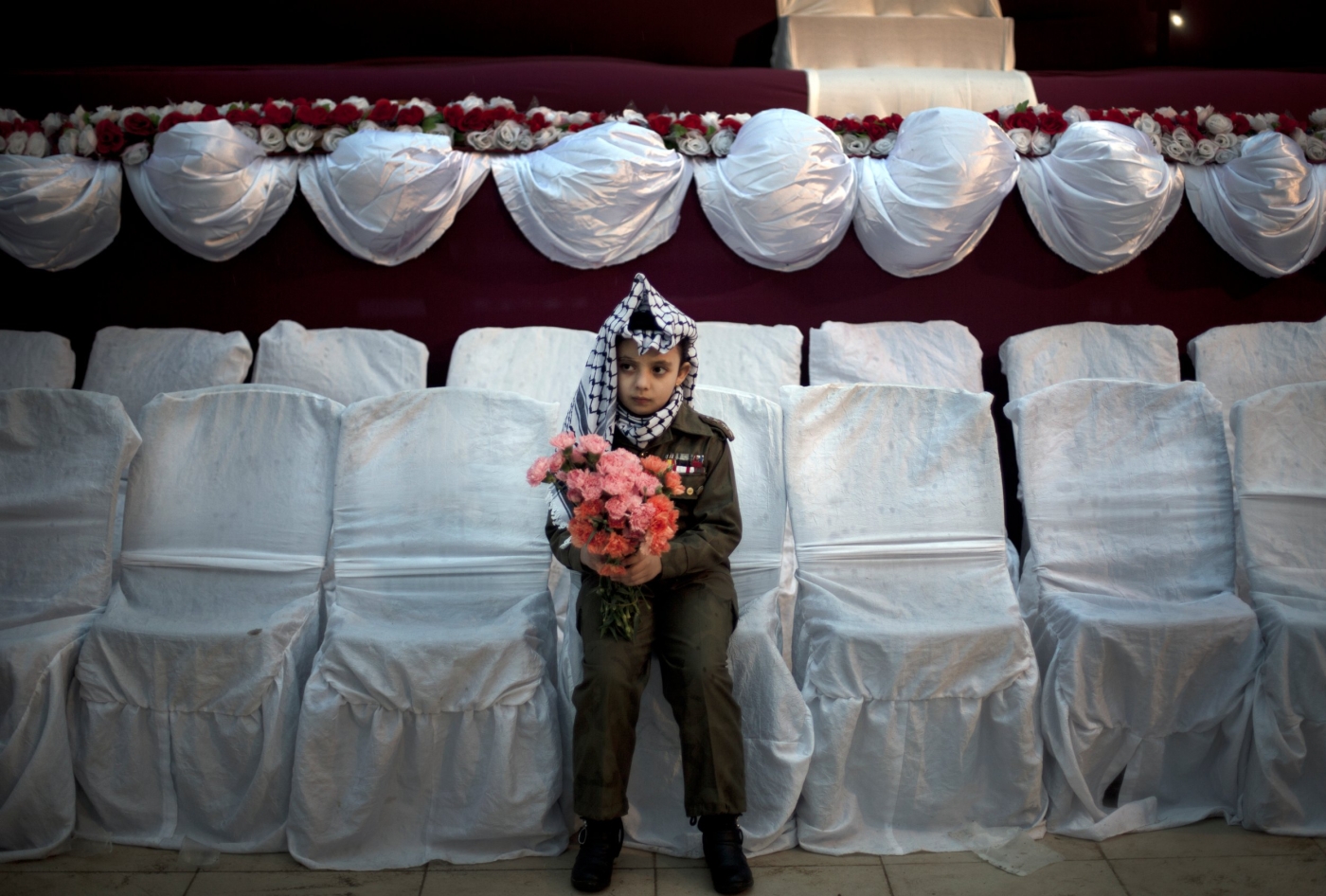 Hussein Qandeel has a simple dream: to earn a decent living, get married and start a family. But in the Gaza Strip, the 39-year-old's aspirations are a luxury.

Caught between recurring bouts of violence and constantly deteriorating economic and social conditions caused by more than 12 years of Israeli-led siege, young Palestinians in Gaza are struggling to survive, let alone build a future and find a partner.

The issue has grown to worrying proportions, as authorities point to ever-decreasing marriage rates as dowries, weddings and housing grow out of reach for Gaza's youth, with wide-reaching consequences for Palestinian society in the blockaded enclave.

Qandeel graduated from university more than 15 years ago with a degree in marketing, but never was able to find a position matching his studies and interests.

"I used to work during my studies to pay my tuition by myself, and after my graduation I embarked on my frustrating journey of job searching, to no avail," he told Middle East Eye bitterly. 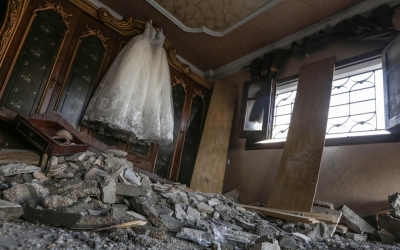 When Yara met Fadi: The story of a Syrian wedding dress under Gaza rubble
Read More »

As years passed, Qandeel's humble hopes for a stable source of income, an apartment, and a wife remained out of his reach, and he sank further into despair as hardships piled on.

"My father is old and sick, and I struggle with my brother to put food on the table every night for our family," he said. "With these mounting responsibilities, the last thing on my mind is marriage."

In order to help provide for his sisters and elderly parents, Qandeel took on some hazardous jobs in construction.

As a result of the protracted physical labour, the young man had to undergo two surgical operations, following which doctors forbade him from exerting such intense physical efforts.

These health restrictions have further narrowed Qandeel's options, leaving him and his family to sink further into despondency and shattering his dreams of marriage.

Meanwhile, Mahmoud al-Leli said he was still dealing with the pain and disappointment of a failed marriage proposal.

The 27 year-old man had fallen in love with a 20-year-old woman from a nearby neighbourhood.

"I loved her so much, and I have long dreamed that we would be together forever," he told MEE. "But it seems that I was aspiring to too much."

Leli still lives with his parents, and the family mainly relies on assistance provided by UNRWA, the UN relief agency, for survival in the absence of stable sources of income, but the young man convinced his father to ask the woman's family for her hand on his behalf.

Leli and his family did their best to present a good marriage proposal, offering $2,200 as a dowry and suggesting that the couple live in one room of the family home until their situation improved.

"Her father barely agreed regarding the meagre dowry, and was still reluctant for the room," Leli said. "But when he found out that my father had borrowed money from relatives and neighbours to cover the dowry and other wedding ceremony expenses, he was angry."

The woman's father broke up the engagement and broke Leli's heart in the process.

Qandeel and Leli are far from alone in their plight; the downward trend in marriages is well documented by local authorities in the Gaza Strip.

Sheikh Hassan al-Jojo, the head of Gaza's High Judicial Council, told MEE that the number of marriages has been declining by at least 10 percent each year.

"More Palestinian young adults of marriageable age now fail to achieve their dream of getting married and raise children for our society," Jojo said. "We are extremely concerned about the decline in the number of couples coming to courts to get married."

Jojo attributed the steep decline to the crippling Israeli blockade since 2007, as well as the three devastating wars and recurrent military strikes on the Palestinian enclave since 2008.

The United Nations warned in 2012 that Gaza would become unliveable by 2020. With the symbolic deadline fast approaching - and many arguing that the enclave has already reached the point of no return - familial structures are eroding as marriage and children become luxuries few can afford.

The average dowry in Gaza nowadays ranges between $5,000 and $7,000, and the cost of wedding parties may exceed $6,000, not to mention that aspiring newlyweds need housing, with rent for an apartment in Gaza coming in at around $300 per month.

With the average monthly salary in Gaza at about $174 in 2014, and some 80 percent of the population living under the poverty line, such staggering costs have led many young adults to put marriage on the backburner, possibly permanently.

Gaza 2020: How easy it is for the world to delete Palestinian pain
David Hearst
Read More »

Jojo called on the international community and official bodies in Gaza to act to provide Palestinian youth with real work opportunities and affordable housing, as he pointed to the negative consequences of having a generation mired in poverty with few hopes for the future.

"Where deep poverty and widespread unemployment prevail, you expect crime, addiction and emigration to emerge," he said. "This is why we should work tirelessly and systematically to save our youth from such deadly choices."

The decreasing rate of marriages has a psychological effects on single Palestinians in Gaza, Jamil Tahrawi, a psychology professor at the Islamic University in Gaza, told MEE.

He said many young Palestinian adults are afraid to get married and start a family in circumstances where they would find themselves unable to provide children with basic standards of living, let alone protect them from the ever-present threat of conflict.

"Developing such an attitude towards marriage is unusual in a culture that sanctifies marriage and ingrains it in people's psyches since childhood," Tahrawi said.

But fewer supportive bonds amongst individuals to help cope with such hardships, the professor added, also mean a weaker and more fragmented society.

"The small Palestinian society in Gaza is drowned in complicated economic and social problems. The particularly unpleasant phenomenon of decreasing marriage rates must be solved, otherwise a negative impact is expected in the long term," he said.

Arwa Irhaim, 28, told MEE it has now become extremely rare for women in Gaza to receive marriage proposals that can sustain their dreams and aspirations.

"Youth cannot afford the costly expenses of marriage in light of scarce job opportunities and dire socioeconomic circumstances," she said. "They prefer to emigrate and escape deep poverty and prevalent unemployment rather than settle into marriage and drown themselves in family's never-ending responsibilities and demands."

'Like any father, I want to see my son live his life in success and prosperity, but instead he is approaching the age 40 without a comfortable home, job or family'

Irhaim, who works in a clothing store, prefers to be single rather than marry an unemployed man unable to comfortably provide for his family.

"I don't think that women should have to deal with this problem. Starting a family and raising children are life-long commitments that must be blissfully fulfilled," she said.

Qandeel, meanwhile, said he felt frustrated and trapped by the huge expenses and social expectations tied to weddings.

"We wish to have some social campaigns to raise awareness between families in Gaza to decrease costly marriage expenses and not to pursue ostentatious wedding ceremonies," he said.

Qandeel’s father, Ahmad, told MEE he remembered how much easier and more affordable life was 20 years ago.

"Marriage does not come cheap in light of expensive costs, inflation, and lack of job opportunities for our sons and daughters," Ahmad, now in his early 70s, said.

He said his heart was broken to see his son's dreams entirely shattered.

"Like any father, I want to see my son live his life in success and prosperity, but instead he is approaching the age 40 without a comfortable home, job or family," he said. "I hope I can see his children before I die." 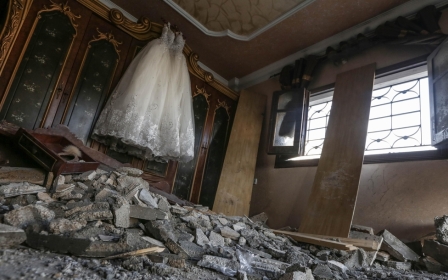 Occupation
When Yara met Fadi: The story of a Syrian wedding dress under Gaza rubble 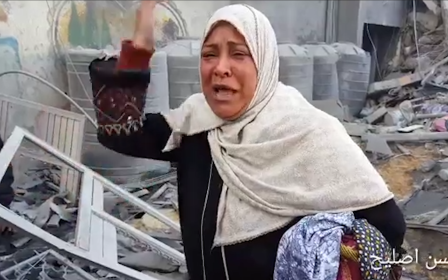