'I cried so much': UK-Iranian Zaghari-Ratcliffe allowed out of Tehran jail

After two years in prison on spying charges, Zaghari-Ratcliffe has been temporarily released for three days 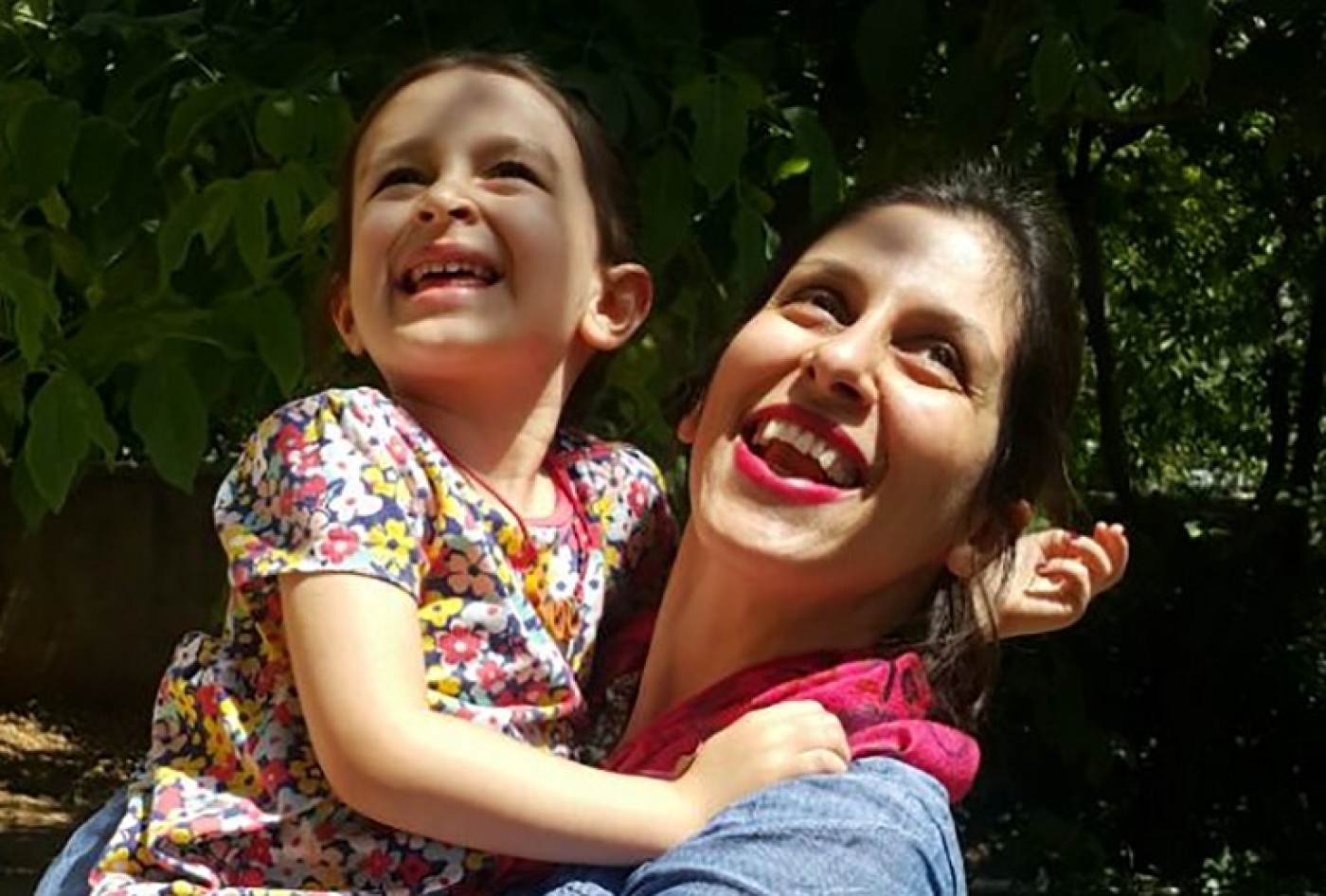 Nazanin Zaghari-Ratcliffe holds her daughter, Gabriella, in Iran after her release on furlough on Thursday (AFP)
By
MEE and agencies

Nazanin Zaghari-Ratcliffe, a British-Iranian woman who has been in prison in Tehran for more than two years following a conviction for spying, was freed for three days on Thursday.

Zaghari-Ratcliffe was reunited with members of her family, including her young daughter, outside the Iranian capital after her surprise release.

"Nazanin was released from Evin prison on furlough this morning. Initially the release is for three days - her lawyer is hopeful this can be extended," her husband Richard Ratcliffe said in a statement.

Ratcliffe said his wife, who has denied all charges filed against her in Iran, was currently with her parents and their four-year-old daughter Gabriella in Damavand, a mountain resort near Tehran.

"I cried so much. I felt so overwhelmed," she said of the reunion, according to a statement released by the Free Nazanin campaign, which is run by her husband.

Her husband voiced thanks to those in Tehran and London involved in making the release happen, including Jeremy Hunt, Britain's new foreign secretary.

"This was a very happy surprise after a number of false dawns recently, which had been increasingly unsettling," her husband said.

Hunt, who met Ratcliffe in London earlier this month after he was appointed as Britain's top diplomat in July, called her temporary release "really good news" and paid tribute to the "tireless campaigning by husband Richard and her friends".

"But being in prison AT ALL is gross injustice and she must be PERMANENTLY released for which every effort will continue," he wrote on Twitter.

Zaghari-Ratcliffe, who works for the Thomson Reuters Foundation, the media organisation's philanthropic arm, was arrested at Tehran airport in April 2016.

She is serving a five-year jail sentence for spying - a charge she has always contested.

Hunt's predecessor Boris Johnson came under heavy criticism after appearing to jeopardise her defence last year by saying she was training journalists during her visit, something her employer and family strongly deny.

Ratcliffe and his supporters have held multiple protests and vigils in London to seek her release, attracting celebrity support from the likes of Oscar-winning actress Emma Thompson.

'Had to borrow a phone'

The Free Nazanin campaign said she was told on Thursday she had just 10 minutes to get ready because she was being released.

Zaghari-Ratcliffe was not allowed to call her family and had to borrow a phone from someone outside the prison to call her brother, who lives in Tehran, to pick her up.

She then called her husband and the British embassy and travelled to join the rest of her Iranian family, including her grandmother and daughter, in Damavand.

"I wasn't expecting it at all when it was mentioned two weeks ago," she was quoted as saying by the campaign.

"I didn't tell Gabriella or for a long time my mum - so if it didn't happen I would be the only one to suffer."

Zaghari-Ratcliffe was told she must return to prison on Sunday and the two conditions of her release are that she not give any media interviews or visit the grounds of any foreign embassy.

Bail for her temporary release was set at one billion rials ($23,800), with her family's home in Tehran used as collateral, the campaign said.

Zaghari-Ratcliffe's lawyers will ask the authorities on Saturday to extend her furlough, it added.

"Nazanin has a number of cellmates who were released initially for three days, but who are still on furlough over a month later," the campaign statement said.