Hezbollah fighters take part in a military parade marking the group's Martyrs' Day in the southern town of Ghazieh, south of the port city of Sidon, on 12 November 2019 (AFP)
By
Mona Alami
in
Beirut

An Israeli drone attack on a Hezbollah vehicle in mid-April that appeared to have intentionally avoided killing the party members the vehicle was carrying was part of a "save face" military policy that both the Lebanese group and Israel have adopted since last summer. Speaking to Middle East Eye, two Hezbollah fighters said that Israel does not want to cause any flare-up on the Lebanese border, but they admitted that the group has become more vulnerable due to various challenges it is facing on the Lebanese front.

A civilian vehicle belonging to Hezbollah was destroyed on 15 April on Syria's side of the Syrian-Lebanese border, by what is believed to be an Israeli drone in a double strike. The attack, which was caught on video, clearly showed a significant lapse of time between the first strike and the second, bringing forth more questions than answers as to the attack's real purpose and the rules of engagement it followed.

Brahim Beyram, a Lebanese Hezbollah expert, underlines that there is conviction within the Hezbollah circles that the drone had intentionally missed the fighters because of Israel's desire to maintain the status quo in neighbouring Lebanon.

"It is clear that Israel wants to avoid direct confrontation with Hezbollah," he said.

Abou Hadi, a Hezbollah fighter who spoke on condition his real name was not used, agreed, saying: "Israel does not want to trigger a military response from Hezbollah on the Lebanese front. It has tested its fighters' capabilities numerous times, the latest in 2006.

"The delay between the two attacks provided the fighters enough time to exit the vehicle, then go back for their own belongings, before the second strike blew up the car."

Experts say that the way the attack took place underlined Israel's desire to maintain certain red lines, given the closeness of the attack to the border with Lebanon, to avoid undermining the relative calm there.

A week ago, the New York Times, quoting several current and former Israeli and Middle Eastern officials, confirmed that Israel had deliberately avoided killing Hezbollah members during the strike.

Avi Melamed, a Middle East strategic intelligence analyst, explained that the attack did not aim at eliminating enemy fighters but had two major purposes.

"One, to eliminate some device or equipment in the car, without killing the passengers. The other purpose was to show that Hezbollah is deeply exposed to Israeli intelligence," he said.

The border attack and several other mysterious attacks that took place in Lebanon in previous months indicate that, despite its military capabilities, Hezbollah is increasingly vulnerable to internal challenges that are reflecting on its security threat level.

In early April, a Hezbollah fighter was found stabbed and shot dead in south Lebanon. Hezbollah hailed Mohammed Ali Younes as a "martyr," alleging that he was killed in the line of duty.

With corruption, comes security breaches and this is very concerning
- Source close to Hezbollah

In August, an Israeli unmanned aerial vehicle, or drone, fell in Dahieh, a Beirut southern suburb known as a Hezbollah stronghold. A second drone exploded at the same time, causing damage to a Hezbollah media centre. The Times of London had reported at the time that the two drones were targeting crates that held machinery to mix high-grade propellant for precision-guided missiles.

Abou Hadi and another fighting named "Hassan," who also spoke on condition of anonymity, agreed that Hezbollah is facing two main challenges rooted in internal corruption and funding cuts.

Abou Hadi complained that patronage networks have become common within the party, which has resulted in powerful commanders granting their support solely to those close to them.

Hassan added that these commanders have business dealings in Lebanon. They are involved in the lucrative distribution of electricity through generators they own in their areas, or in business involving the internet or water, he claimed.

"With corruption comes security breaches, and this is very concerning," a source close to Hezbollah said on condition of anonymity.

"We all remember what happened to the Palestine Liberation Organisation in Lebanon. It went from being a powerful resistant fighting force against Israel to an organisation involved in side dealings."

Hezbollah is also suffering from funding cuts resulting from US sanctions targeting both the party and Iran, its sponsor, which is also struggling with its own economic crisis.

Both Hassan and Abou Hadi admit that declining resources have resulted in reducing or complicating Hezbollah fighters' access to social services. Funding cuts have also reflected on the party's intelligence gathering across the country, due to closure of some of its outposts.

These internal dynamics have been compounded by the catastrophic economic and financial situation prevailing in Lebanon, which in March defaulted on a $90bn debt, pushing Hezbollah to further avoid a military conflict with Israel on the Lebanese front.

At the same time, the strategic analyst Melamed said, Israel will keep on defending its military interests, which mainly reside in hindering Iranian plans to establish military capacities and infrastructure in Syria and preventing Tehran "from providing Hezbollah with high-precision missile capacities".

In Lebanon and its vicinity, Melamed said, "Israel is focusing on information gathering and reconnaissance work, to boost its deterrence capabilities".

Israel has chosen to limit making direct attacks that would lead to large casualties in the ranks of Hezbollah and Iranian forces in Syria, where Russia is capable of reigning in their military response.

Another advantage of the Syrian arena is the capacity to maintain ambiguity during attacks, given the multiplicity of players, such as Turkey, Russia, Iran, the US and Israel, all of whom back a number of non-state armed actors.

The most recent large-scale Israeli attack on Iranian and Hezbollah interests took place in March in Syria, when a series of air strikes targeted sites linked to the Lebanese group in the western and southern areas of Homs and Qunaitra.

Israel and Hezbollah saving-face policy can be seen in the players' limited response to each other's attacks in Lebanon and surrounding areas.

Two days after the drone border attack on its vehicle, Hezbollah damaged the fence separating Israel from Lebanon in three locations.

After the August Israeli drone attack, Hezbollah retaliated at the time by firing several anti-tank missiles into northern Israel without causing any casualties.

Hezbollah and Israel's controlled responses in Lebanon and on its borders underline the players' desire to maintain the rules of limited and indirect engagement. Inside Lebanon
US imposes sanctions against Hezbollah-linked Lebanese companies 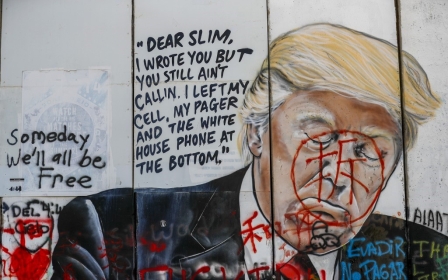