Iraq elections 2021: Yazidis divided but determined on eve of polls

The beleaguered minority, persecuted by IS and still largely displaced, have more candidates than ever before, threatening long-standing KDP political dominance in Iraqi Kurdistan 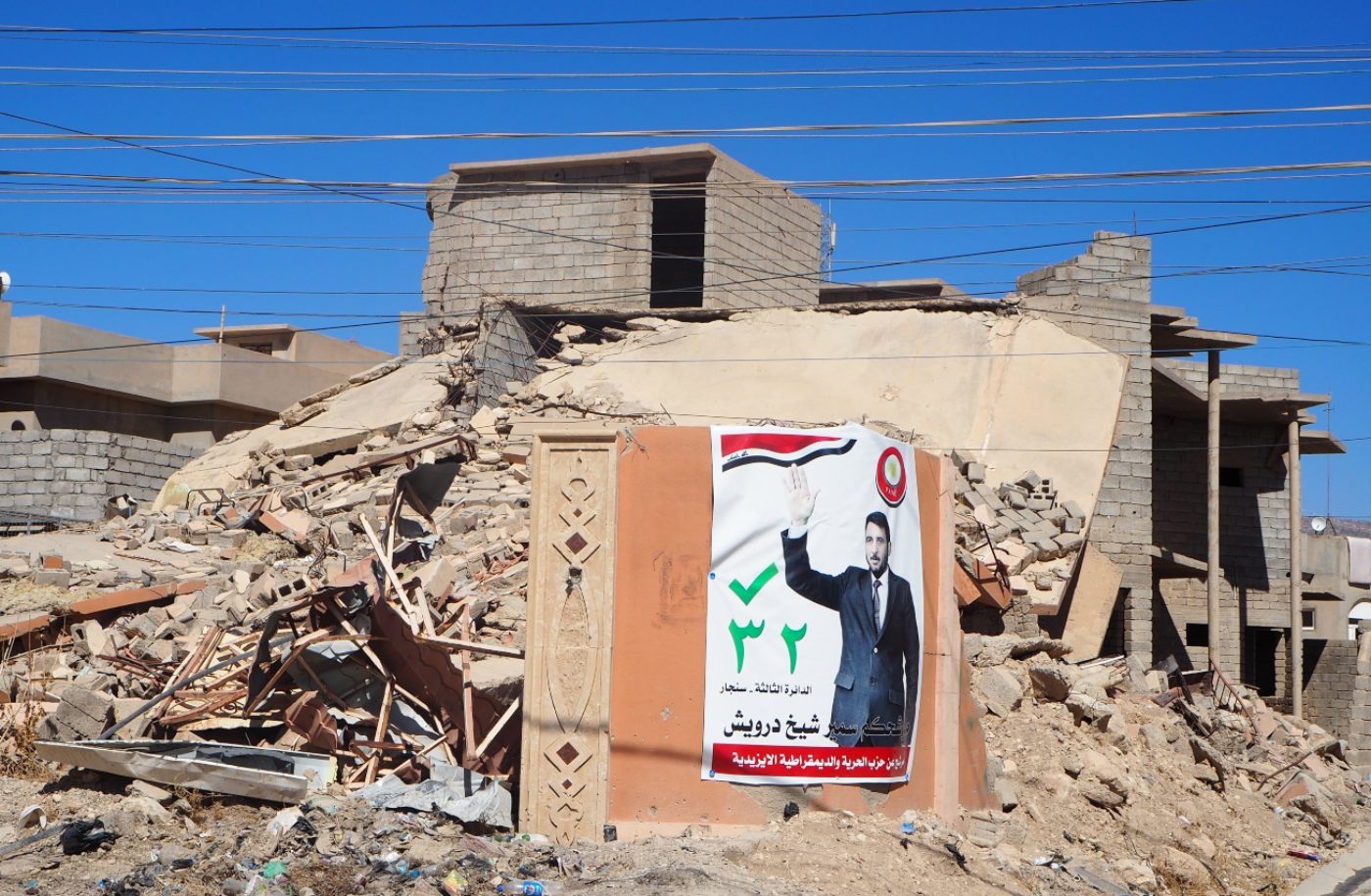 A campaign poster for the Yazidi Freedom and Democracy Party, Pade, on a destroyed building in Sinjar, northern Iraq (MEE correspondent)
By
MEE correspondent
in
Sinouni, Iraq

On the approach to the dusty town of Sinouni in the Sinjar region, now infamously known as the ancestral homeland of Iraq's Yazidi minority where the Islamic State (IS) carried out a brutal genocide, the number of posters depicting parliamentary candidates for Sunday's election is surpassed only by a proliferation of colourful bunting.

At one checkpoint, the bunting is yellow, each small flag blowing in the wind decorated with the emblem of the Democratic Party of Kurdistan (KDP), the ruling party of Iraqi Kurdistan which, until four years ago, controlled the Sinjar district.

The next checkpoint is decorated with red bunting bearing the emblem of the Yazidi Freedom and Democracy Party, Pade. 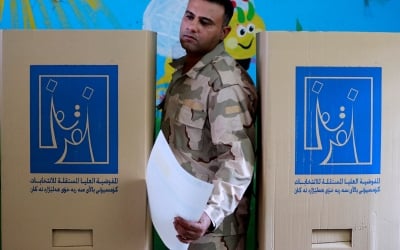 However festive it may appear, Sinouni's flurry of flags reflects fierce rivalries running through a reinvigorated Yazidi political scene, where 12 candidates are competing for four seats.

"For the Yazidis, this election is very different from previous votes," said one Sinjar resident, who, like many locals, requested to speak anonymously due to current tensions.

"Before, there were just candidates from three main parties - the KDP, the Patriotic Union of Kurdistan [PUK] and the Yazidi Movement for Reform and Progress, and only the KDP was really strong and powerful. This time, there are many independent candidates to choose from."

There is considerable appetite for voting here, more so than in other Iraqi governorates, where many say these elections will merely replace one set of corrupt politicians with another. Although the neglected Yazidis also expect little will change, the choice of candidates has inspired more interest in politics.

This new wave of political interest is encouraging, according to Shamo Mourad Hussein, a candidate standing for the Yazidi Movement for Reform and Progress, the oldest Yazidi political party, established after the overthrow of former Iraqi leader Saddam Hussein.

"We wanted the Yazidi youth to have their own ambitions and stand as independent candidates. But the problem is, although they are standing as independents, they actually have support from parties and are under the political agenda of others, so they're not really independent."

Kurdish media have reported that two of the Yazidi candidates are backed by the Kurdistan Workers' Party (PKK), members of which are still reportedly hiding out in Mount Sinjar and who continue to be sporadically targeted by Turkish air strikes, most recently in August this year.

A Sinjar source also said it was locally believed the PKK might try to gain some political foothold by backing an electoral candidate.

A medic who will be heading to the polls for the first time said he feared the proliferation of candidates, parties, and allegiances would do the Yazidis no favours in the long run.

"We are a small minority, so we need to be united, but now everyone is divided between ideas and parties," he said. "This has made us very weak, as we have no one leader who can unite us. If we continue like this, we will become weaker and weaker until we disappear."

One of the four Yazidi seats is allocated to a woman, sparking a fierce contest between the two women candidates: the KDP's Vian Dakhil, a long-standing Yazidi MP, and Marwa Mourad al-Sheikh Kalo, daughter of an adviser to late former Hashd al-Shaabi (Popular Mobilisation Forces) commander Abu Mahdi al-Muhandis, assassinated by a US air strike in January 2020.

"This is a very real and serious competition, and I feel it," 33-year-old Kalo told MEE with a shy laugh. "The other candidate has been in parliament for eight years, but when anyone is nominated, of course, they have support and will get some votes, and I'm happy to be involved."

Even Yazidis not planning to vote spoke warmly of Mosul-born Kalo, noting her French higher education, although few realised her PhD linguistics thesis discussed the impact of immigration on minority languages - a pertinent topic for Iraq's Yazidis, many of whom sought asylum abroad after IS was defeated in the area.

Kalo is understood to have Hashd al-Shaabi backing, likely to bring her votes as the force holds considerable respect in Sinjar, while her posters across Sinjar far outnumber the images of her rival Dakhil.

The fresh Yazidi candidates competing in this election, the second parliamentary election since Baghdad regained control of Sinjar from Kurdish rule following the ill-fated 2017 Kurdish independence referendum, have threatened the dominance of the KDP, which has held the lion's share of Yazidi minority seats in parliament since 2003, when the semi-autonomous region of Iraqi Kurdistan absorbed Sinjar into its territory.

Many Yazidis who have returned to the Sinjar region, an estimated 30 percent of the 500,000 to 700,000 who remain in Iraq, seem determined to ensure that the Kurdish loss of Sinjar is not just a territorial one, but also a political one.

"Definitely not a Kurd!" fumed Saad, 61, as he bought vegetables in a Sinouni shop. "Not one single Yazidi seat will go to a representative of a Kurdish party, and anyone who says otherwise is a member of a Kurdish party.”

The antagonism towards Kurdish parties is sensitive and complex. No-one here has forgotten it was Iraqi Kurdistan's peshmerga forces that fled Sinjar in 2014, leaving Yazidis at the mercy of IS’s brutal genocide.

There are also long-standing grievances that Iraqi Kurdistan failed to invest in Sinjar during the 11 years it held the territory, and dissatisfaction over the forced eviction from Iraqi Kurdistan of displaced families believed to have affiliations with the Hashd al-Shaabi, which incorporated several Yazidi units into their ranks. Even identifying as ethnic Yazidis rather than Kurds allegedly brings the risk of persecution in patriotic Kurdistan, according to Hussein. Pointing out that Yazidism is one of the world's oldest religions, he told MEE: "We believe our ethnicity is Yazidi, not Kurdish. And our experience is that whenever the KDP has the opportunity, they carry out violations against the Yazidi people."

Defaced posters reflect local anti-KDP sentiment. At the main roundabout in Sinjar town, someone has carefully removed the electoral number from several of the party's posters.

It is not that Yazidis expect much better from Baghdad, which has also largely sidelined the remote region, only hastily resurfacing Sinjar town's war-scarred roads two days before the vote. But there are hopes that independent candidates may offer more effective representation for the minority and its needs in parliament.

Some prospective voters anticipate that at least one or two seats will still be secured by the KDP, mostly because of its influence over the estimated 70 percent of the Yazidi population still living as internally displaced persons (IDPs) in Iraqi Kurdistan.

Yazidi candidates not representing Kurdish parties have largely been unable to campaign in the camps where most of their electorate lives. Kalo is the only such candidate who has managed to access the camps but, she told MEE, this was conducted like a secret mission rather than a campaign visit, during which she was forbidden from putting up posters, despite KDP campaign posters proliferating across the camps.

She also encountered a sense of fear.

"Some IDPs called me and said: 'We will vote for you, but please don't visit us because it will cause problems for us here,'" she said.

"I want to support the community but I also need to keep them safe."

Hussein, whose party has consistently petitioned for accountability of the security forces which abandoned the Yazidis to IS, is forbidden from entering Iraqi Kurdistan but did attempt to send a driver with business-card-sized campaign material. The car was turned back.

"In Iraqi Kurdistan, the 'camps' - we call them prisons - are fenced in, and the [Kurdish intelligence units] Asayish have been going tent to tent, visiting families and threatening them, telling people if they don't vote for the KDP, they will have benefits and food rations withheld," Hussein said. "If the elections in the camps were free, fair, and transparent, I'm sure that 60 percent would vote for us, but they cannot because they are under threat."

When the KDP sent an electoral delegation under armed escort to campaign in the Sinjar region, they were stopped at the first checkpoint and prevented from entering by alleged members of the Sinjar Resistance Units (YBS) and disgruntled families who had been forcibly ejected from IDP camps.

"They said you can campaign here if our parties can campaign in the Yazidi camps, but the KDP would not agree," one Sinouni resident told MEE.

On Thursday, the day before the special voting day reserved for IDPs, military forces (excluding Hashd al-Shaabi), hospital inpatients, and prisoners, Kalo received a call from an IDP saying Kurdish representatives had visited the camps, reminding residents to vote for the KDP and claiming CCTV cameras overlooking voting booths had been installed.

"Whether or not it's true, people believed them and are now scared to vote as they wish," she said.

Such issues have apparently been raised with the Political and Peacebuilding Affairs section of the United Nations Assistance Mission to Iraq, which is overseeing electoral processes.

Meanwhile, many Yazidi IDPs are unable to vote at all. Although a low uptake of the new biometric ID card, originally mandatory to prevent fraud, prompted Baghdad to rescind its decision to enforce their use and allow people to also vote with old-style national ID cards, this has changed little for many IDPs.

"You can now vote with your old ID card, but only in your hometown, and these Yazidis are far from Sinjar, so cannot vote," said a Sinjar resident.

Kalo said she had offered to provide free buses to Sinjar so displaced Yazidis could vote, but claimed Kurdish forces threatened that anyone who took up this offer would not be allowed back across the border.

Intense discussions about the possible results of how Iraq's Yazidis across Sinjar choose to cast their votes on Sunday show the outcome is not a given.

But, in the battle of the bunting in Sinouni, where KDP flags fly just at one checkpoint and PUK garlands are draped only outside their offices, it is Pade, with its bright-red bunting stretching across all the main streets in town, that is the clear winner.