Iranian Kurds, who for decades have fled to the Iraqi Kurdistan region seeking asylum, say they are living in dismal conditions and legal limbo 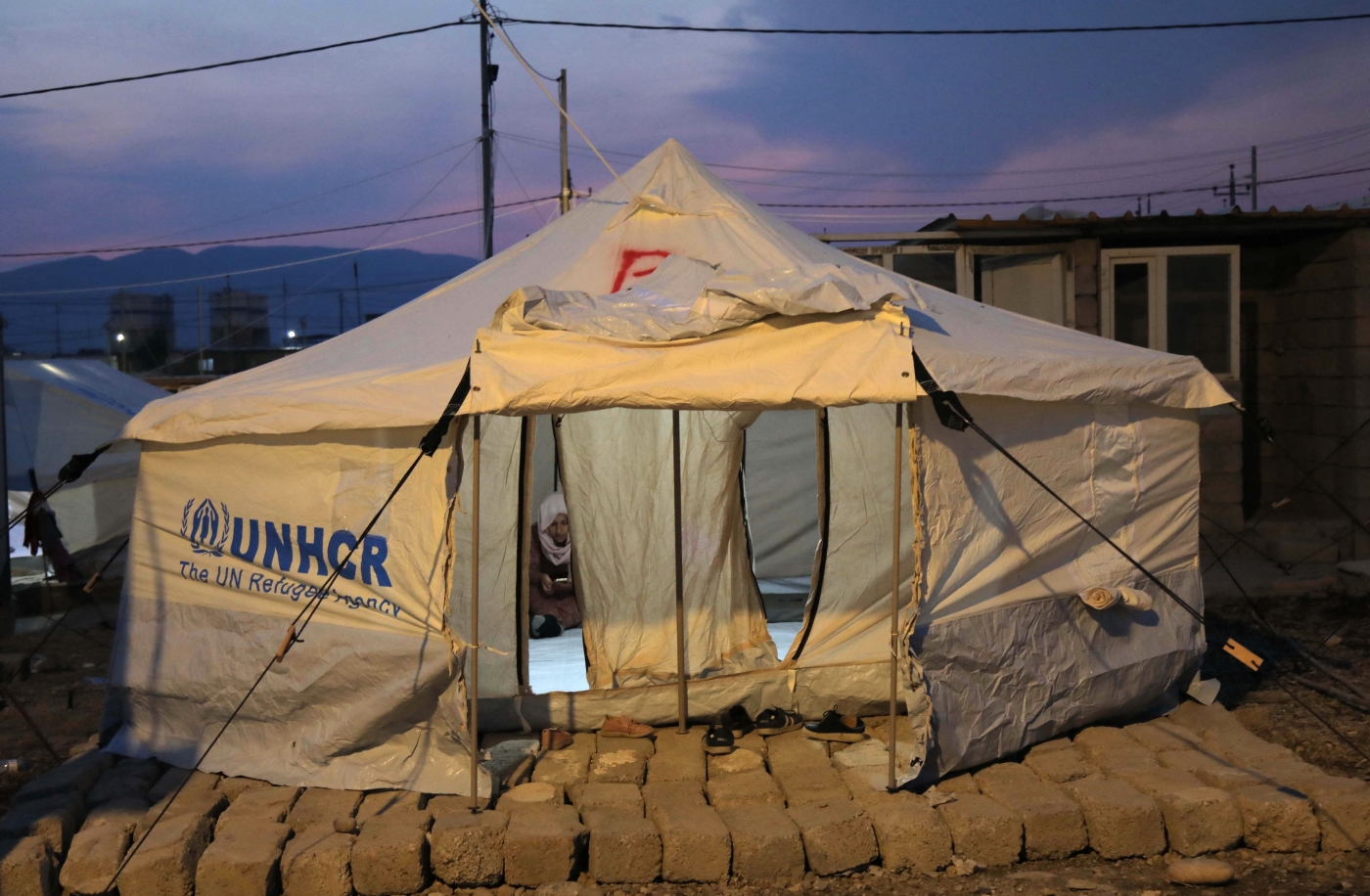 For Fardin Grami, an Iranian Kurd sentenced to death in Iran, there was no choice but to flee his country and seek sanctuary in the Kurdistan region of northern Iraq.

Grami and tens of thousands of other Iranian Kurds seeking relocation to a safe third country through the United Nations recount the misery of poor living conditions and long waits for asylum decisions.

Nearly 10 million Kurds, around 10 per cent of the population of Iran, live in Iranian Kurdistan, in western Iran, along the borders with Iraq and Turkey.

For decades, they have been deprived of their political and cultural rights. Since the Islamic revolution of 1979, successive Iranian governments have been suppressing the Kurds with an iron fist, prompting an armed struggle to achieve autonomy within Iran. Thousands of Kurds have fled to the neighbouring Iraqi Kurdish region. He repeatedly applied to the United Nations refugee agency, the UNHCR, for temporary accommodation and transfer to a third country. But his demands were left unanswered by the organisation.

He doused himself in fuel and set himself alight on 18 May in front of the UN headquarters in Erbil, in the presence of some Kurdish journalists. He died on 24 May of his wounds.

“I and Mahmoudi were close friends for years. We worked hard together, but we always had financial, work and accommodation issues,” Grami told Middle East Eye in a phone call.

“We both went to the UN seeking responses on our cases from the UNHCR in Erbil, but they did not let us enter their offices. We threatened to burn ourselves in protest, but the UN’s guards mocked us.

“We both purchased some fuel and phoned some journalists. Then, the journalists told us to pretend that we are starting self-immolation, and assured us that they would prevent us from setting ourselves on fire,” he added.

“We were waiting for the journalists to prevent us, but unfortunately the tragedy finally happened.”

Mahmoudi’s self-immolation in front of cameras has sparked a wave of criticism on social media of the perceived indifference of UN officials towards the refugee situation in the Kurdistan region.

'We both went to the UN seeking responses on our cases from the UNHCR in Erbil, but they did not let us enter their offices. We threatened to burn ourselves in protest, but the UN’s guards mocked us'

It also led to a harsh rebuke of the Kurdish journalists who did not prevent him from setting himself on fire, instead prioritising their media coverage over saving a life.

The KRG Department of Media and Information condemned on 19 May the media outlets that covered “the brutal incident with no regard for journalistic integrity and ethics”. It said that authorities will take measures “to prevent such inaction and inhumane behaviour from occurring again".

“The asylum seeker’s self-immolation is a human tragedy, but suicides are not considered crimes in Iraqi law. Thus, those journalists who covered the event are not criminally guilty,” Hakim Shiekh Latif, a legal expert, told MEE.

Mahmoudi and Grami had worked as construction workers in Erbil to earn a piecemeal living, and didn't have proper accommodation.

Grami said he is also a member of Sazman Khabat, and as an activist in Iran had participated in several demonstrations. He said neither he nor Mahmoudi received any financial assistance from the UN. He is under imminent threat of deportation to Iran.

Last year, a 53-year-old Iranian Kurd, Mustafa Salimi, escaped Iran and demanded asylum from Kurdistan regional authorities, but Kurdish security forces in the eastern district of Penjwin handed him over to the Iranian authorities, who later executed him.

Iranian Kurdish asylum seekers protested in front of the UNHCR office in Erbil on 20 May, submitting a letter to UN officials.

“The UNHCR is required by the rules of this organisation to review the case of any political asylum seeker within three to six months of registration, and to take necessary actions to begin processing the individual’s case and his/her safe transfer to a safe third country,” reads part of the letter.

“Iranian Kurds who are seeking political asylum through the UN are the most marginalised among all refugees in Iraq, facing all kinds of injustice and discrimination,” Arsalan Yar Ahmadi, a board member at the Hengaw Organisation for Human Rights in Kurdistan, told MEE via a messaging application.

He explained that the UN has not registered Iranian Kurds as asylum seekers since 2006. It has been registering them as refugees instead.

“According to our statistics, there are nearly 30,000 political asylum seekers who are originally from Iranian Kurdistan, and face danger if they return. Those asylum seekers get little financial support from the UN, and have issues related to accommodation, administrative obstacles, residency documents, medical care, education and unemployment.”

He also accused the UNHCR of corruption in processing the cases of Kurdish asylum seekers.

Firas al-Khateeb, a UNHCR spokesperson, dismissed all corruption allegations, and indicated that they are working according to the international refugee and humanitarian laws.

“We are assessing the cases of 10,000 Iranian Kurds according to one refugee policy in which we review all cases of refugees and asylum seekers,” Khateeb told MEE.

“We must make sure that whoever is considered an asylum seeker and applies for UNHCR assistance has to be a civilian in a humanitarian setting and not a militant or somebody who has a military background or conviction, otherwise their case will be delayed.”

Many Iranian Kurds, who are no longer demanding relocation to a third country, have been living in the Kurdistan region for more than a decade and have married local Kurds are still waiting for the Iraqi government to grant them nationality.

“Many of the Iranian Kurds have residency issues and complications by the KRG authorities to renew their residencies every six months,” Mustafa Zahidi, an Iranian Kurd living in the region since 2000 and working as a journalist, told MEE.

“Although most of the Iranian Kurds have been in Iraq for more than 10 years, the Iraqi government is not giving them nationality, while it gave nationality to Palestinians and Iranian Shias who came to Iraq after 2003.”

According to Iraq’s constitution, issuing nationality and passports are within the exclusive powers of the federal government in Baghdad. But the KRG in 2006 gave Iraqi nationalities to Zahidi and other Iranian Kurds. Iraqi laws stipulate that every refugee who legally stays for 10 years in the country can apply for nationality.

'Although most of the Iranian Kurds have been in Iraq for more than 10 years, the Iraqi government is not giving them nationality'

“Our nationalities might be withdrawn at any time, since the Iraqi government does not recognise them,” Zahidi added.

Shadi Nawzad, a Kurdish lawmaker and member of the Kurdistan region’s human rights committee told MEE that Iranian Kurds are living in dire economic conditions in the Kurdistan region because the UN’s mechanisms for processing and relocation are too slow.

“The pandemic and consequent financial crises in Iraq and the KRG have exacerbated their woes,” he said.

“The Iraqi refugee law of 1971 includes very strict measures, making it very difficult for Iranian Kurds to get Iraqi nationality. Iran might have a role in not amending this law.”

Sheikh Latif said that although he has no tangible proof that Iran is pressing the Iraqi government over Iranian Kurds, “everything is possible, as we all know Iran has a big influence in Iraq”.