Opposition leaders in Iraq have criticised an official government inquiry into a deadly crackdown on recent protests, with a former premier calling for the government to resign.

At least 157 people were killed during mass protests that erupted in Baghdad on 1 October and spread to several other cities, the inquiry said in its findings, released on Tuesday.

It said the vast majority of the deaths, which included at least 149 civilians, occurred because the Iraqi security forces used excessive force and live fire to stem the protests.

Independent Iraqi politician Maytham al-Joubouri said "the results of the investigation have little importance for the protesters," AFP reported on Wednesday.

"Blood was spilt," al-Joubouri told the news agency, adding that it would be difficult for the families to accept such a report if "the criminals that killed protesters" were not clearly identified. Iraqi protesters have been demanding jobs, public services and an end to government corruption.

In an effort to quell the tensions, following the inquiry the government said that several commanders from across its security forces had been dismissed in the wake of the violent crackdown.

It was unclear how many security commanders were let go, however.

According to the inquiry's report, "the committee found that officers and commanders lost control over their forces during the protests [and this] caused chaos".

But opposition leader Haider al-Abadi, who served as Iraq's prime minister from 2014 to 2018, slammed the government for not revealing "who was actually responsible for giving the order to kill protesters".

The face that protesters were targeted in several provinces across the country showed they were following "orders from a high central authority," he said.

Abadi called on the government to "resign and apologise to the people".

The party also said it "does not respond to everyone's concerns and in particular, those of Grand Ayatollah Ali Sistani," AFP news agency reported.

Sistani, who wields significant political power as the spiritual leader of Iraq's Shia majority, had given the government a Friday deadline to respond to the protesters' demands and to shed light on the violence.

'The results of the investigation have little importance for the protesters'

Another major protest is set to take place on Friday, and Sistani is also expected to give a sermon that day, AFP reported.

Shia leader Ammar al-Hakim, also in opposition, stopped short of calling for further protests, but said on Twitter: "We will not stop our supporters from protesting in a personal capacity."

Another influential Shia cleric, Moqtada al-Sadr, also called on the government to resign.

The Iraqi parliament said it plans to meet to discuss the protesters' demands on Saturday. 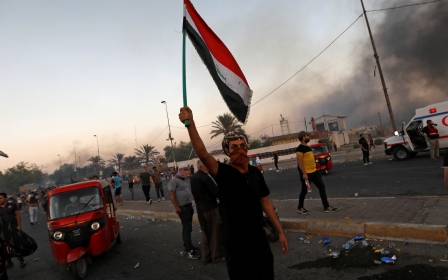