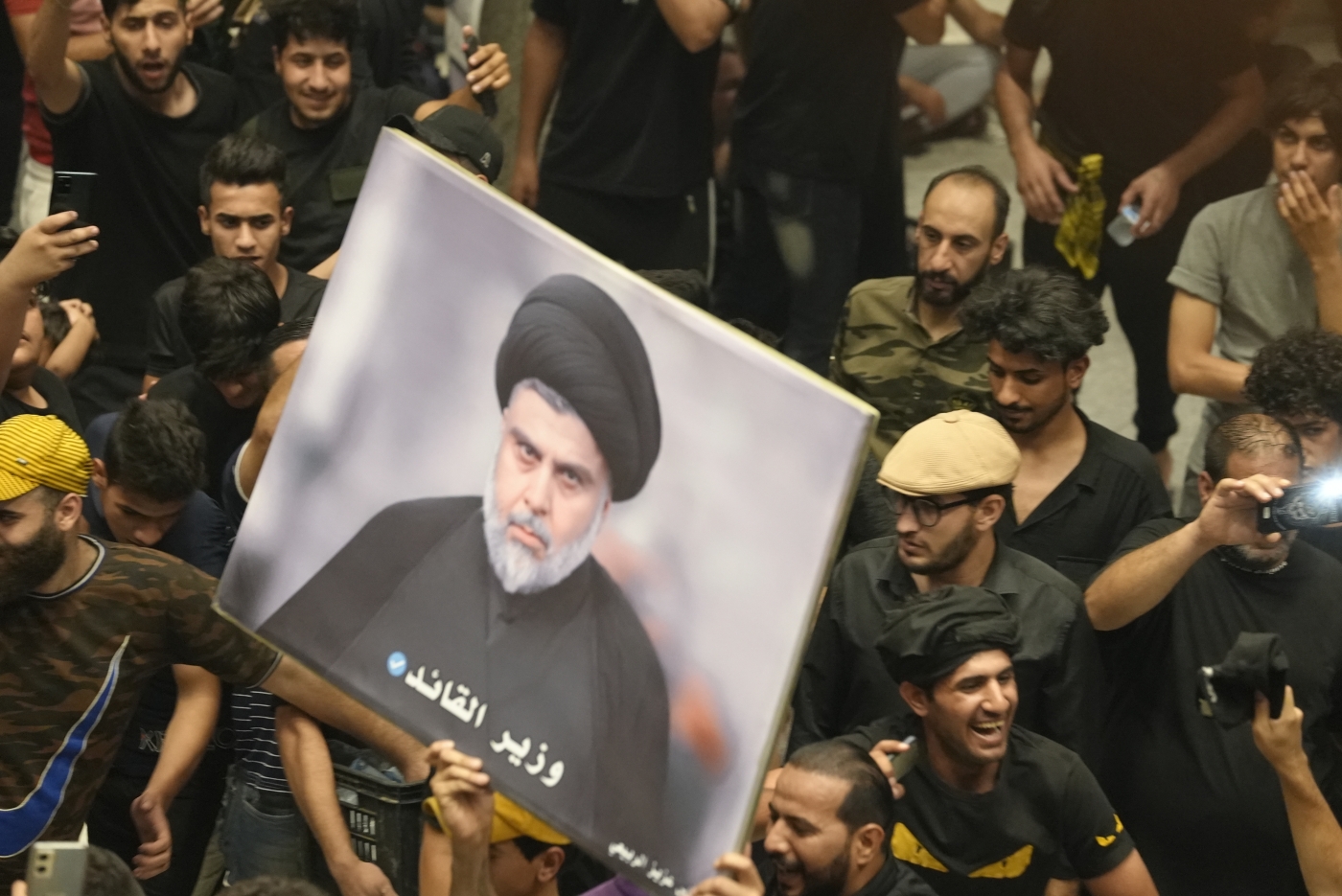 Ali Salih travelled to Baghdad from Iraq's south-east to take part in the week-long sit-in outside parliament on Friday, joining others in support of influential Shia cleric Muqtada al-Sadr's demand for early elections.

Salih, an unemployed university graduate, said he is protesting for better living conditions.

"I graduated last year, but I'm still searching for a suitable job in the private sector since getting a job in the public sector is like an American dream," the 23-year-old from Maysan told Middle East Eye.

'Our demand is simple, a government without ties to Iran, that's all'

"We live in scorching weather and still successive governments have all failed to provide electricity, clean water, health services and infrastructure."

Protesters have occupied the parliament since 30 July, following the nomination by the Coordination Framework bloc, Sadr's rival, of Mohammed Shia al-Sudani as its candidate for prime minister.

"I came to the parliament by bus, to the area where citizens are not allowed to enter. But today, its door is open for all Iraqis," Salih said, while taking a selfie capturing the parliament building in the background.

Sadr has also called for early elections, a scenario the rival bloc says it is conditionally open to despite the previous national polls taking place only about 10 months ago.

Mohammed al-Halbousi, speaker of parliament, also welcomed Sadr's call for an early election, saying that national elections should be held within an agreed period of time.

The house of the people

With temperatures at nearly 50 C, thousands of Sadrists and non-Sadrists alike performed Friday prayers together inside Baghdad's Green Zone, which is home to Iraq's parliament, government buildings and foreign embassies.

People gathered in groups near Tahrir Square to walk to the Green Zone and enter the parliament by crossing the Jamhuriya Bridge. Many also went by buses or tuktuks, especially those who had travelled from southern provinces. From the beginning of the Jamhuriya Bridge, drivers transported protesters to the closest point near parliament.

One driver, who was charging only 250 dinars ($0.17) a ride to attract customers, was offering free rides to those who had no cash to pay with.

"The parties that are loyal to foreign actors are responsible for leading the country into corruption and poverty," Sayed Mohanad al-Mousawi, the imam of Friday's prayers, told MEE.

On his way to the parliament, which Iraqis refer to as the "house of the people," 56-year-old Abu Hussein spoke to MEE while sitting in the front seat of a bus.

"This is the first time in my life when I can go to the parliament and cross the forbidden area of the Green Zone by bus," he said.

"We all have answered the call of our leader, Muqtada al-Sadr, to come and protest against the corruptors, to kick out the current government and replace it with a government that works for the interests of Iraqis and not for external agendas, including Iran.

"That's exactly what the Coordination Framework bloc wants to do. That is why we are here, to curb any step by them to ruin the country."

'We gave our word to Sadr'

Inside the Green Zone, tens of cars are loaded with dry food, vegetables and air conditioning units to provide some reprieve to those protesting and sleeping outside the parliament's outer hall.

There were also chefs preparing food from morning until midnight, while cold drinks and watermelon were available around the parliament area to beat the hot weather. Elections to protests: How Iraq descended into crisis
Read More »

"We gave our word to Sadr that we are ready to sacrifice... to save the country from them. We also demand they be held accountable for their crimes against Iraqis, of whom thousands were killed during the Tishreen protest movement," said Hamed Abdul-Razzaq, a 53-year-old from Baghdad's Sadr district.

"Our demand is simple, a government without ties to Iran, that's all."

Majed Hameed, a 47-year-old protester, said he came all the way from the southern city of Basra to join the protest and demand the rights that Iraqis have been deprived of for decades.

"I live in Basra, the city that produces millions of oil barrels per day and provides about 90 percent of the country's annual budget. Meanwhile, Basrawis only receive diseases and cancer from the oil flares," Hameed said.

"All the current government decision-makers have bank accounts in western countries. It is actually our money that gets transferred outside, leaving the country in ruins.

"Bad health services, poor educational system, corruption anywhere you go inside state intuitions - what else do they want to do against us?" 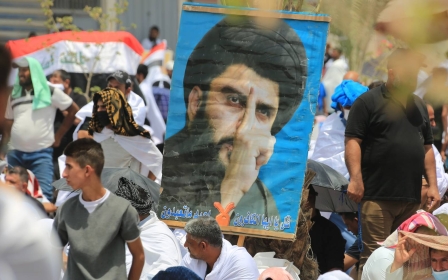