Palestinian fighters of the Qassam Brigades, Hamas' armed wing (AFP)
By
MEE and agencies
An Israeli air raid early on Monday struck a Hamas training camp in the northern Gaza Strip in response to shots fired at Israeli patrol vehicles along the border, with no injuries reported, officials said.
Hamas security sources said two rockets hit a training camp for its armed wing, the Ezzedine Al-Qassam Brigades, east of Gaza City in the Zeitoun neighbourhood, with no one there at the time.
The Palestinian movement Hamas has ruled the Gaza Strip since 2006, after winning elections across the Palestinian territories.
Shots were fired at Israeli military vehicles near the Gaza border on Friday and Sunday, causing bullet holes to their windows and leading to Monday's attack, Israel's army said. No injuries were reported from the shooting incidents.
Israeli forces have sporadically bombed Gaza since last summer, when Tel Aviv launched an assault on the Palestinian enclave killing more than 2,200 people. Seventy-three Israelis were also killed in the 49 day war, which left Gaza devastated with hundreds of thousands of people made homeless. 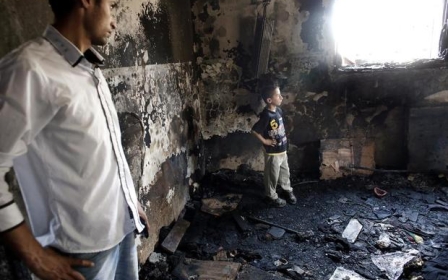