With 90 percent of votes counted, prime minister is two seats short of majority in parliament 'What a joyous night,' a beaming Netanyahu told a cheering crowd in a speech at Likud's election headquarters in Tel Aviv (AFP)
By
MEE staff

Prime Minister Benjamin Netanyahu led on Tuesday in a cliffhanger election in Israel, but was still just short of a governing majority in a third national ballot in less than a year.

Netanyahu, head of the right-wing Likud party, claimed victory in Monday's vote over his main challenger, Benny Gantz of the Blue and White party, but results so far show the prime minister two seats short of a majority in parliament. With 90 percent of votes counted, Likud holds 36 seats, with Blue and White on 32 seats, a gap between the two blocs of 59 to 54 in favour of Netanyahu, according to Israel's Haaretz newspaper.

The third-largest party was the Joint List, which represents Palestinian citizens of Israel, shown as gaining 15 seats.

United Torah Judaism were seen with eight seats and Shas with 10. Yisrael Beiteinu and left-wing alliance Labor-Gesher-Meretz are both on seven. Yamina stand at six.

Yisrael Beiteinu Chairman Avigdor Lieberman said his party would wait until the final results before delivering a decisive victory "to either side".

"We are not part of any bloc, we belong to the liberal, national right-wing and will act according to the national interests of the State of Israel," he said.

Voting ended at 10pm (2000 GMT), and official results will be delayed due to new procedures enacted for this election, as well as the issue of counting the ballots of voters quarantined for coronavirus.

Last month, Netanyahu was indicted for bribery, breach of trust and fraud in three corruption cases, which could damage his bid to stay in office.

The prime minister, who goes to trial on March 17, denies the charges.

A win for Netanyahu, 70, after inconclusive ballots in April and September, would pave the way for the prime minister to make good on his pledge to annex, after the election, illegal settlements in the occupied West Bank, and the region's Jordan Valley, under a plan presented by US President Donald Trump.

Palestinians have rejected the proposal, saying it was killing their dream of establishing a viable state in the West Bank and besieged Gaza Strip, territory Israel captured in the 1967 Middle East war.

'We turned lemons into lemonade'

"What a joyous night," a beaming Netanyahu told a cheering crowd in a speech at Likud's election headquarters in Tel Aviv.

'Settlement, annexation and apartheid have won the Israeli elections'

"This victory is especially sweet, because it is a victory against all odds ... We turned lemons into lemonade."

Former armed forces chief Gantz, in an address at his party's election headquarters, stopped short of conceding defeat, saying the election could result in another deadlock.

"I will tell you honestly, I understand and share the feeling of disappointment and pain because it is not the result we wanted," he said.

A Likud spokesman said he expected Netanyahu would manage to gain a governing majority and establish a coalition government by getting lawmakers from the opposing camp to cross sides.

"There will be defectors," Jonatan Urich told Channel 12 News.

Coalitions are the norm

Following September's election and in a bid to remove Netanyahu, the Joint List had endorsed Gantz for prime minister after his party won the most seats, breaking a nearly 27-year-long standard of not endorsing a candidate.

However, during campaigning for the latest round of the election, Gantz said he would build a coalition only with a Jewish majority, in an apparent attempt to win right-wing voters.

Coalitions are the norm as winning a majority of 61 seats is required to form a government.

Gantz has said he favours a coalition government with Likud but only if it rids itself of its longtime leader because of the corruption charges against him.

Netanyahu, who still enjoys widespread support in his party, insists he must remain as prime minister in any unity deal.

'Settlements and apartheid have won'

With his career on the line, Netanyahu has campaigned furiously. He has taken a hard turn to the right in hopes of rallying his nationalist base, promising to expand and annex settlements in the occupied West Bank.

In January, Trump unveiled his controversial plan, known as the 'deal of the century', which greenlights Israel's annexation of settlements and swathes of land in the occupied West Bank.

Bolstered by US support, Netanyahu has campaigned on building thousands of more homes in settlements in occupied Palestinian territories, even though they are considered illegal by the international community. 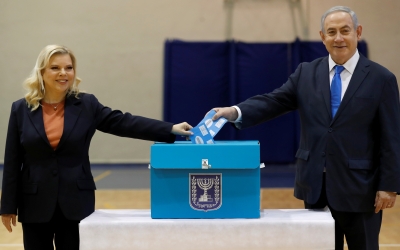 "Netanyahu's campaign was about the continuation of the occupation and conflict," Erekat added on Twitter, saying the result would "force the people of the region to live by the sword: continuation of violence, extremism and chaos".

Netanyahu has pledged to annex the Jordan Valley, a large part of the occupied West Bank, if he won and formed the next government.

Palestinians see the territory as a vital part of their planned future state and have said such annexation would mean an end to the notion of peace on the basis of the two-state solution.

Israeli citizens aged 18 and over, including those living in illegal settlements in occupied East Jerusalem and the West Bank, were eligible to vote in the election.

The 4.8 million Palestinians living under Israeli military occupation in East Jerusalem, the West Bank, and the Gaza Strip do not have voting rights. 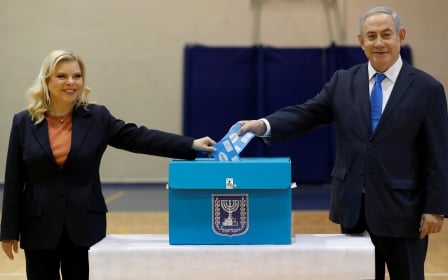