They were about to get married in Gaza. But Israeli air strikes killed their dream

Israeli offensive left behind a trail of death and destruction, destroying the joy of many just beginning their married lives 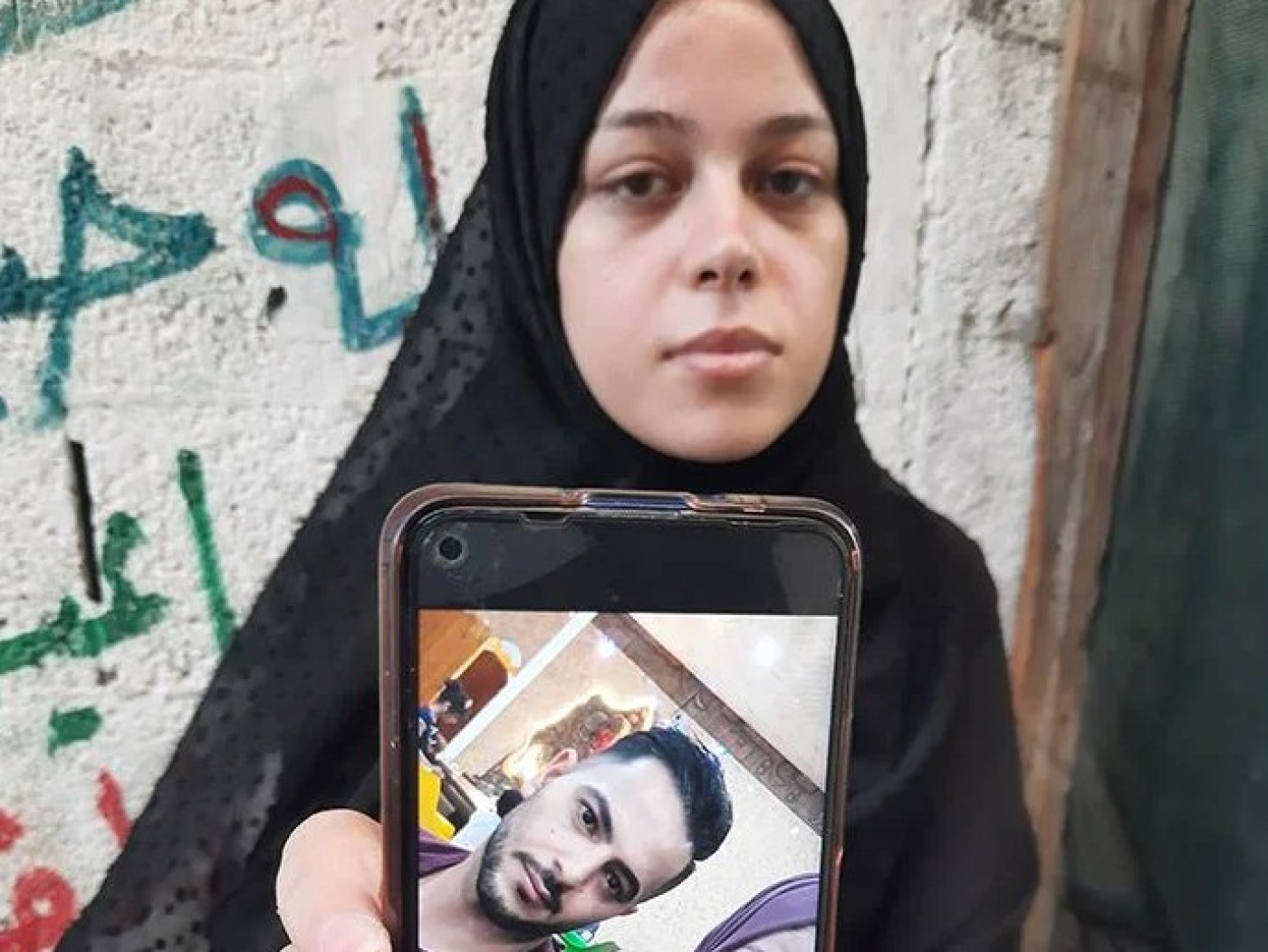 Before ending their last call at 9.05pm on 6 August, Abeer Harb told her fiance, Ismael Dwaik: "I love you."

But Ismail did not reply with his usual "I love you too," because he was sitting next to his friend.

For a long time, Abeer had been a regular customer of Ismail's grocery store in Rafah, in the southern Gaza Strip.

'I do believe he's alive. I'll keep waiting for a call from Ismail, in which he will reply to me with: I love you too'

Ismail had fallen in love with her but had not revealed his feelings; eventually he decided to confide in his mother, Hana, 51.

There are many steps for marriage in Palestine, first a man sends his mother or someone from his family to the woman's family to ask for her hand in marriage.

If they agree, the couple conclude a marriage agreement in court and become officially married.

However, the bride still lives at her family house and during this period she is called a fiancee, not a wife, although they are officially married.

Finally, after weeks or months, a wedding party is held after which the bride moves to her husband's house to live with him and is finally considered a wife.

Hana went to Abeer's home on 16 May and asked the 24-year-old if she would marry her son.

“I agreed without thinking. Ismail is an angel, not a human being," Abeer told Middle East Eye.

The couple concluded the marriage agreement on 14 June and agreed to throw a wedding party in September.

"Ismail was kind, honest, smart and reliable," said Abeer, while holding back her tears. "He used to be scared for me about everything. All people loved him."

The couple discussed the details of their apartment, which Ismail was going to build.

'My soulmate was under the rubble'

Around 9pm on 6 August, Ismail's mother called her son and asked him to buy her a bar of chocolate, so he went to their house.

"When I heard the raids, I felt something bad would occur," said Abeer.

"I immediately called Ismail, whose phone was ringing without any reply.

"After a while, I called his brother, Mohammed, who told me their neighbour's house had been targeted, and Ismail and my mother were under the rubble. 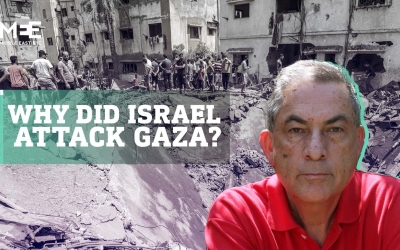 "I kept calling Mohammed, who told me 'they are under three-storeys of rubble, and we can't reach them yet.'

"I was in the worst situation I've ever gone through in my life. Imagine my soulmate was under the rubble for hours, and I didn't know if he was alive or not?"

At 2:30am, Mohammed told Abeer they had pulled out the bodies of Ismail and his mother.

“I still don't know how Allah strengthened me at that moment," said Abeer, a flood of tears coming from her eyes and wearing both their wedding rings.

Struggling to describe the last time she saw Ismail before burying him, Harb said: "I promised him while hugging his body that I would not marry anyone and wait for our wedding party to be thrown in heaven, God-willing."

Although Abeer attended Ismail's three-day funeral, she still believes she might hear his voice again.

"I do believe he's alive. I'll keep waiting for a call from Ismail, in which he will reply to me with: I love you too," she said after hugging a mourner.

Israel launched its three-day military offensive against the besieged Gaza Strip on 5 August, killing 49 people, including 17 children and three women.

On 6 August, Mohammed Abu Qaida, 55, was waiting for his wife, Na'ama, 60, to pick up their son Akram's wife Ghada, 22, from the hairdresser, near the Beit Hanoun crossing in the northern Gaza Strip.

Na'ama had been over the moon when Akram, 24, had agreed to get married as he had talked of emigrating to Europe for a better life, with unemployment among Gaza youths at 75 percent.

"I can't describe her happiness, she wanted to make everything quickly," said Abu Qaida, a father of six.

"So, Um al-Walid (Na'ama) found a girl, and we concluded the marriage agreement in two weeks. She insisted on holding the wedding party quickly out of her happiness."

However, two weeks before Akram's wedding, one of their extended family passed away.

According to custom and tradition, this meant they either had to wait 40 days to hold their wedding party, or instead hold a more modest event.

'They ruined our joy'

After waiting three weeks, they decided to hold a smaller event.

"We decided to throw a small party. We went to the studio on the wedding day and took wonderful pictures," said Abu Qaida.

"At 1.40pm, Um al-Walid and two of my children were in the car. As I opened the door, an Israeli rocket hit it.

"I didn't realise what had happened. I thought the tyre had punctured. I rushed to my wife, she was covered with blood, her face was completely burnt.

'Why did they kill her? What is the guilt of the five injured children?'

"I knew she had been martyred. The two children were heavily bleeding."

The rocket had killed Um al-Walid and her grandson, Haneen, 10. Five children were also injured, aged from two to 13.

"What did we do? Why did they kill our happiness? We were in front of their CCTV cameras, and they were watching what we were doing," said Abu Qaida.

"Um al-Walid had been waiting for years to see Akram become a groom. Akram is a poor shepherd who sold his only ten sheep, and I borrowed a lot from others to pay the dowry," said the father while wiping his tears.

"Haneen asked the doctor, while crying, not to cut her red dress so she could return to the party. Why did they kill her? What is the guilt of the five injured children?

"They ruined our joy and turned the most beautiful day in our life into the worst one."

Saqer al-Rifi woke up at 8am on 5 August to get his hair cut before buying some desserts to receive his fiancee, Israa Awaad, 18, for the first time in his apartment in Palestine Tower in central Gaza.

He had borrowed a portable speaker to throw a small party to celebrate her success in high school.

"My father told me we would hold the party for her after Al-Asr prayer and give her the gifts.

"Around 4.15pm, Israa and I were talking in the guest room."

Suddenly, without warning, several Israeli rockets hit their flat, causing a fire that burnt through everything.

"My family was screaming. I didn't know what to do," said al-Rifi.

"I took my fiancee out of the building and returned to check my family and savings.

"All my family members were injured and covered with blood, and I could not reach my room because of the fire."

Eight members of al-Rifi's family were injured in the attack. They left the hospital after three days.

He and Israa were due to hold their wedding party next month.

"It took me more than five years to collect the 2,500 JD that I had saved for the wedding preparations next month. "The 8,000 shekels were a gift from my brother for the wedding. Two weeks before the attack, I bought new clothes, shoes, perfumes and other stuff for more than 3,000 shekels.

"When I returned to my room, I thought of throwing myself into the fire to get my money. They were my life savings.

"I have had to delay my wedding for an unspecified date. I have had to take loans to get married. I have no other choice."

Al-Rifi's father Ameen, whose injured right hand is still unhealed, is still shocked by what happened.

"I was sleeping when a rocket hit my room. Another hit the kitchen where my wife was," he told MEE.

"The third one targeted the toilet where my 11-year-old son, Weal, was taking a shower.

"The fourth one fell on Saqer's room. Saqer was screaming: 'My money, my money'.

"We had furniture and electronic devices worth more than $20,000. Our 140-metre apartment was home to 17 members, including eight children who were home at the time of the bombardment, Alhamdulillah for everything." Gaza Under Attack
'My daughter, my friend': The Palestinian art student killed in Israel's Gaza assault